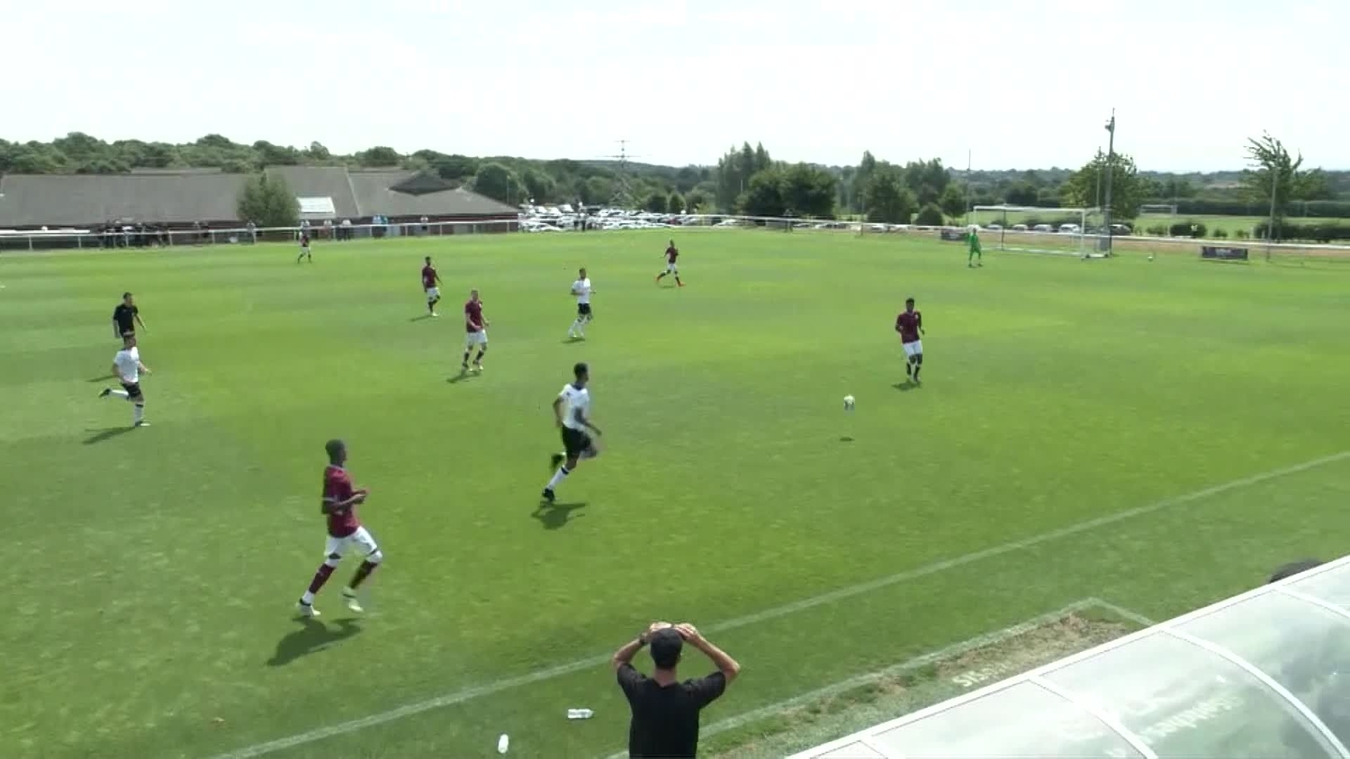 Re-Watch The U23s' Meeting With Aston Villa In Full Derby County Under-23s suffered a 2-1 defeat as their pre-season preparations continued in a friendly clash with Aston Villa at the Training Centre in partnership with University of Derby.

A number of first-team faces lined-up for the Rams and it was Jamie Hanson’s superb strike on the stroke of half time that offered the equaliser to Mitch Clark’s opening goal.

Jacob Bedeau tapped in a cross just after an hour to hand Villa the victory.

Chris Martin got his first game minutes under his belt this pre-season, starting for the first 45 minutes along with other first-team players George Thorne, Nick Blackman, Hanson and Jacob Butterfield.

The Rams were the more dominant side in the first half with a number of good looks at the goal while Villa struggled to get past Derby’s backline.

Hanson almost put the Rams up inside 10 minutes when he chased down a clearance by Villa keeper Jord Ruijgrok, though the deflection bounced just wide.

Ruijgrok was called into action again soon after. Louie Sibley’s cross into the box found Max Hunt at the far post but the defender’s powerful header went straight into the stopper’s hands.

Elsnik returned to the Under-23s line-up after appearances for the first-team and saw his effort sail over the bar at the half an hour mark.

Five minutes later, Villa mounted their first attack that proved lethal. Jack Clarke struck first but Josh Barnes managed to punch it away. His initial save fell to Alex Prosser and his strike was cleared off the line by Hunt.

It was third time lucky for Villa when two more half clearances landed at the feet of Clark and his low volley found the opposite corner.

Derby secured the equaliser in the final kick of the half. Ruijgrok managed to keep out back-to-back efforts by Elsnik and Blackman before Hanson danced around the defender to level the score.

Thorne put pressure on Villa’s backline and the ball popped out to Hanson on the edge of the box. On his second touch, he flicked it over Prosser before his low volley struck the bottom corner.

Hunt, who alongside Calum Macdonald and Kellan Gordon played the full 90 minutes, had another good block to start the second half to prevent Prosser giving Villa the lead.

Moments later, Butterfield saw his low strike saved. He was replaced after an hour for Offrande Zanzala while Alex Babos replaced Elsnik.

Villa didn’t have to wait long to grab the winner. Just after an hour the visitors took advantage of the Rams’ momentary lapse in concentration. Derby were appealing for a foul on Sven Karic in the box when a cross from Harvey Knibbs was delivered to Bedeau for an easy tap-in past substitute keeper Henrich Ravas.

Zanzala almost grabbed an equaliser in the 78th minute but his volley on the end of a Gordon cross sent Ruijgrok diving to save it.

One final attack by the Rams wasn’t enough as Karic saw his shot deflected and the Rams fell to a 2-1 defeat at home.

Darren Wassall’s side travel to Spain on Thursday ahead of a clash with Real Union in attempt to defend the Steve Bloomer trophy.