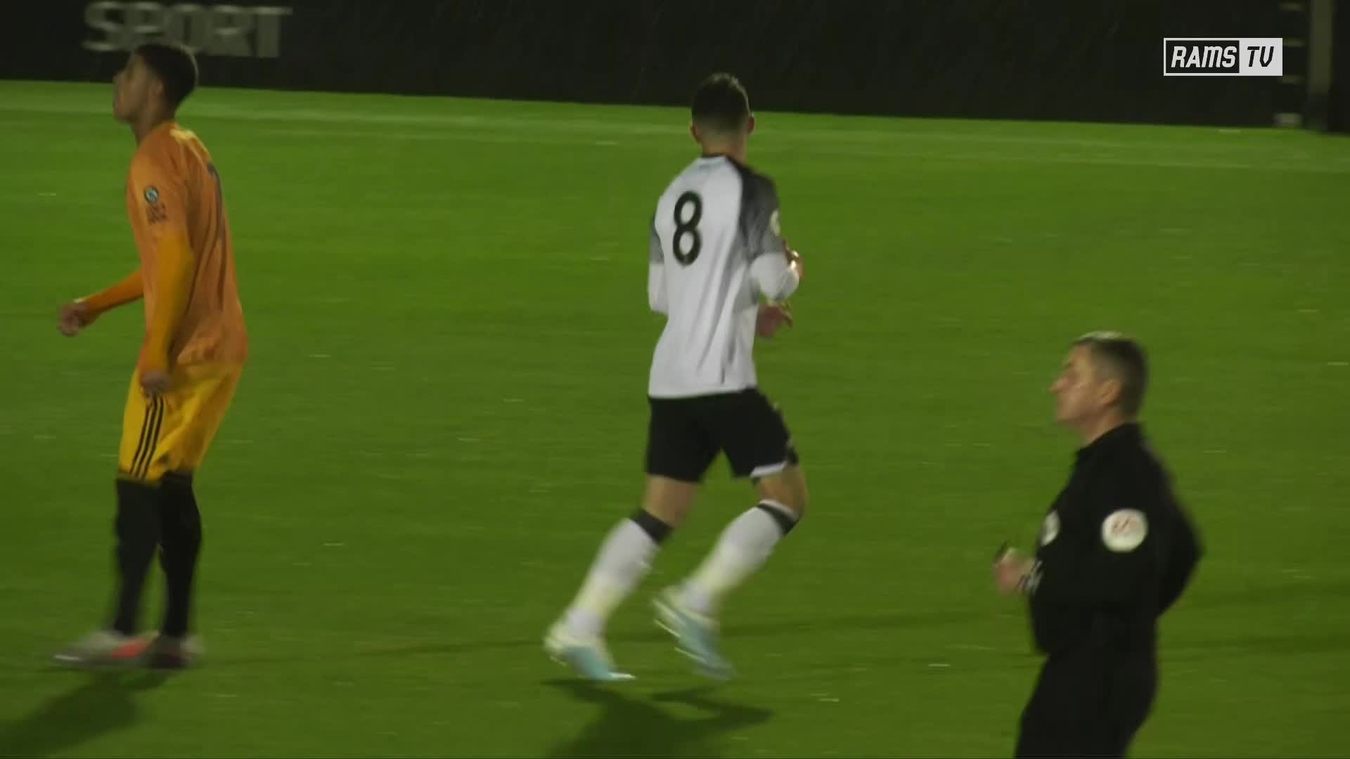 Buchanan: "We Could Feel It Coming" Short Pleased To Earn A Late Draw Against Wolves Lee Buchanan headed in a dramatic late equaliser in the 94th minute to snatch a point against Wolverhampton Wanderers and move Derby County’s Under-23s to nine games unbeaten in Premier League 2 - Division 1.

Darren Wassall’s side found themselves down 2-0 at half-time after goals from Terry Taylor and Ed Francis, but they came out fighting after the break to earn a share of the points.

The Rams’ leading goalscorer this season, Jahmal Hector-Ingram, took his tally to six when he powered in from the penalty spot midway through the second half. An inevitable equaliser finally came in the final minute of injury time as Buchanan capped off a brilliant personal and team performance only minutes after Hector-Ingram fired a second penalty over the game over.

The Rams looked lively to start the game and inside the opening ten minutes came close twice. Jason Knight intercepted the ball on the edge of the box and drove forward but his low shot was saved by Andreas Sondergaard.

Just four minutes later, Joe Bateman headed a free-kick by Louie Sibley just wide after Hector-Ingram was hauled down just outside the area.

Wolves showed their defensive intent early, however, and soon nullified Derby’s attack in the final third throughout the half.

In the 19th minute, the visitors took the lead. After Derby failed to properly clear a corner, the ball fell to Taylor well outside the area and his powerful volley flew into the net to break the deadlock.

Just after the half-hour mark, Sibley powered forward with a few touches before unleashing a shot from 20 yards out to draw another strong save by Sondergaard.

In the final minutes of the half, Wolves doubled their lead through a set piece when Richards sent a free-kick effort from 20 yards out hurtling past Henrich Ravas.

The tide turned early on in the second half when, for the first-time in the game, the Rams were able to stretch Wolves. Quick passing from Sibley to Knight then found Hector-Ingram on the left who crossed to Jayden Mitchell-Lawson at the back post. He saw his effort fly over, however from that moment Derby’s pressure was relentless.

The first goal came on 66 minutes after Hector-Ingram was brought down in the box. The striker stepped up to the spot and buried his effort in the middle of the net for his sixth goal of the season.

While Wolves were unable to pose an attacking major threat in the second half, the Rams continued on the front foot looking for the equaliser. A superb effort by Knight almost found it but Sondergaard made a good stop to tip it over, via the crossbar, after the midfielder unleashed from range.

In the 89th minute, Derby had a golden chance to equalise. Hector-Ingram was taken out in the box by Wolves’ keeper and was awarded another penalty, though this time his effort this time went over the bar.

The Rams weren’t deterred and in the final minute of injury time Buchanan delivered. Alex Babos whipped a corner into the area and, after already taking a hit to the face earlier in the evening, the young defender powered in the header at the far post to grab a point.