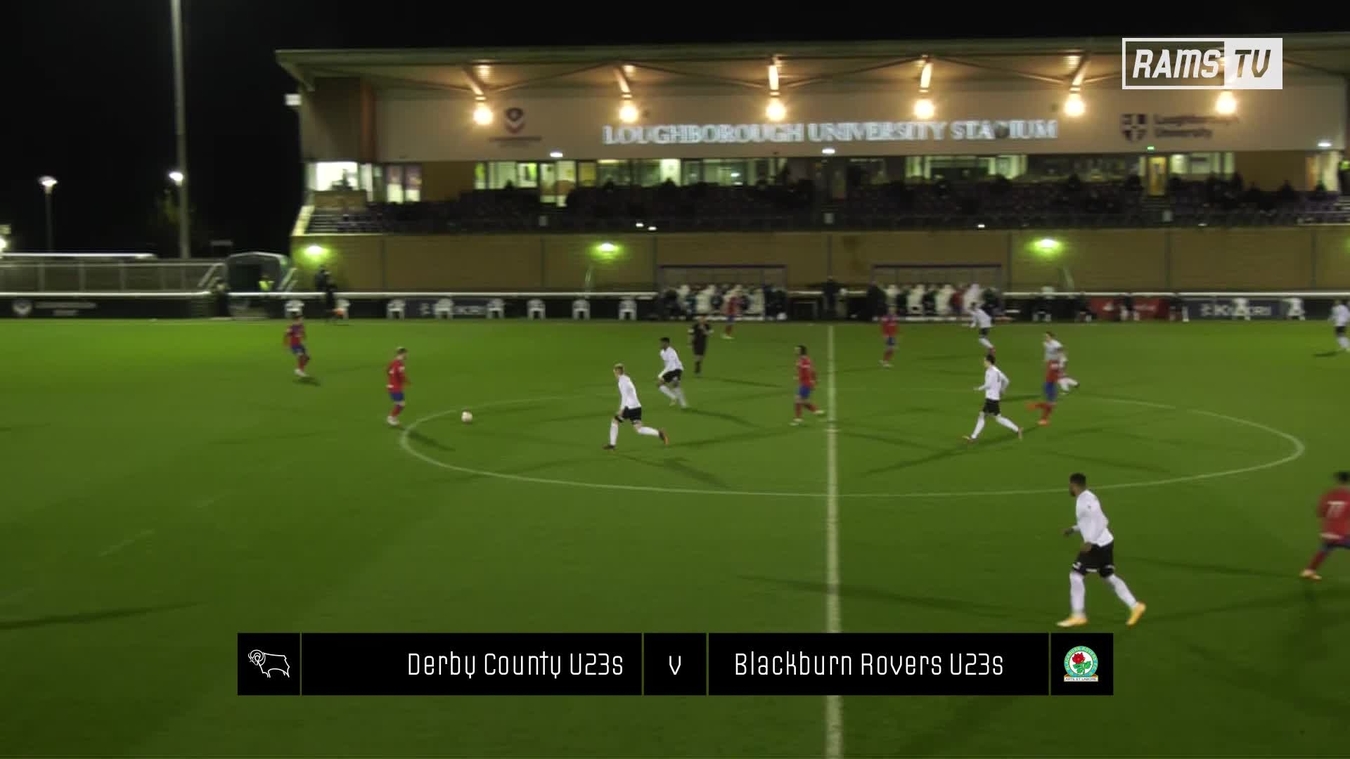 Lyons: "The First Half Of The Season Has Been Excellent" Brad Lyons fired the visitors ahead early on, but Derby hit back to equalise within a few minutes as Louie Sibley thundered home from the edge of the penalty area.

Harry Chapman restored Rovers’ advantage just after half-time to kick off a second-half goal glut, but Sibley netted his second of the night just a minute later to bring the Rams back onto level terms once again.

Sibley saw red on the hour mark after picking up his second booking of the night, before Jahmal Hector-Ingram scored from the penalty spot moments later to put Derby ahead for the first time.

Rovers, however, made their one man-advantage count as Chapman equalised immediately and Joe Nolan scored for the visitors with 20 minutes remaining to put them back in front.

Derby’s side included the likes of first-team squad members and Academy graduates Max Bird, Morgan Whittaker and Sibley, while Jordon Ibe and George Evans were also included in the starting XI in order to gain more match minutes and build up their sharpness.

Youngster Kornell McDonald, who made his senior bow off the bench at Brentford earlier this month, was also named in the starting line-up at right-back.

Third-placed Blackburn, managed by Billy Barr, included Bradley Dack in their side after almost a year out of action for the influential midfielder. The 26-year-old sustained a serious knee injury two days short of a year ago against Wigan Athletic and was offered the chance to step up his comeback by playing 45 minutes.

Derby’s Under-23s went into the game off the back of four wins and a draw from their five home fixtures in the season to date and occupied fourth place prior to kick-off.

Despite starting brightly, with Hector-Ingram having a shot blocked after a forceful driving run from Whittaker, it was the visitors who drew first blood as Lyons swept home after just nine minutes.

The Northern Irishman, who spent the 2018/19 season on loan at St Mirren in Scotland, found space to latch onto Daniel Butterworth’s neat flick in the box to sweep the ball beyond George Sykes-Kenworthy with his right foot.

Derby did not take long to hit back, eight minutes to be exact, and haul themselves back onto level terms with a well-worked goal.

Blackburn failed to clear a corner and Ibe used his pace and quick feet down the left to beat his marker and cut the ball back to Sibey in space around 16 yards out. The attacking midfielder steadied himself for a second, following a good first touch, before unleashing a powerful strike with his less-favoured right foot which arrowed into the far corner.

Both teams enjoyed positive spells over the course of the remainder of the half, but clear-cut opportunities were few and far between.

Blackburn were closest to scoring before the half was out but goalkeeper Sykes-Kenworthy, signed from Bradford City in September, was called into action to make a double stop at his near post to deny Dolan.

As the rain poured down at the start of the second period, the visitors came out the traps quickly and restored their lead within two minutes of the restart.

Chapman came inside from the Rovers’ left, seeing off the close attentions of McDonald, and lashed a low drive across goal which evaded Sykes-Kenworthy in the Derby goal and nestled into the far corner.

As was the case in the first half, Derby hit back. This time, their response came inside a minute and Sibley was once again the player on the scoresheet.

The England Under-20 international went on a driving run from midfield into the Blackburn box and eventually let fly with a left-foot effort that found the net via a deflection off a Rovers defender.

After producing an impressive showing from an attacking perspective, Sibley was dismissed on the hour mark after picking up two yellow cards. Both cautions came because of needless late challenges in midfield, leaving the Rams to play for the final 30 minutes with ten men.

Daniel Pike almost made Blackburn’s one-man advantage count with Sibley not even back in the changing room as the Rovers substitute rattled the woodwork with dipping effort from distance, with Sykes-Kenworthy on his feet quickly to gather the rebound.

Within 60 seconds, however, Derby broke down the other end and grasped the opportunity to take the lead for the first time on the night from the penalty spot.

Archie Brown was brought down in the box after driving forward from left-back, leaving Hector-Ingram to keep his cool from 12 yards to blast the ball high into the roof of the net.

Within a few minutes, however, Derby’s lead evaporated as Rovers hit a quickfire double to turn the game around once again.

Chapman equalised straight from the kick-off to slot past the onrushing Sykes-Kenworthy and, after a break in play after McDonald was taken off due to injury, Nolan was in the right place at the right time to finish off a cross from the left from close range.

Derby pushed for a way back into the game and introduced Isaac Hutchinson and Bobby Duncan off the bench after falling behind, but Dolan rounded off with an emphatic finish late on to condemn the Rams’ Under-23s to their first home defeat of the season.

Pat Lyons’ side will return to action on Monday 18th January 2021 when they welcome Manchester City’s Under-23s to Loughborough University Stadium.