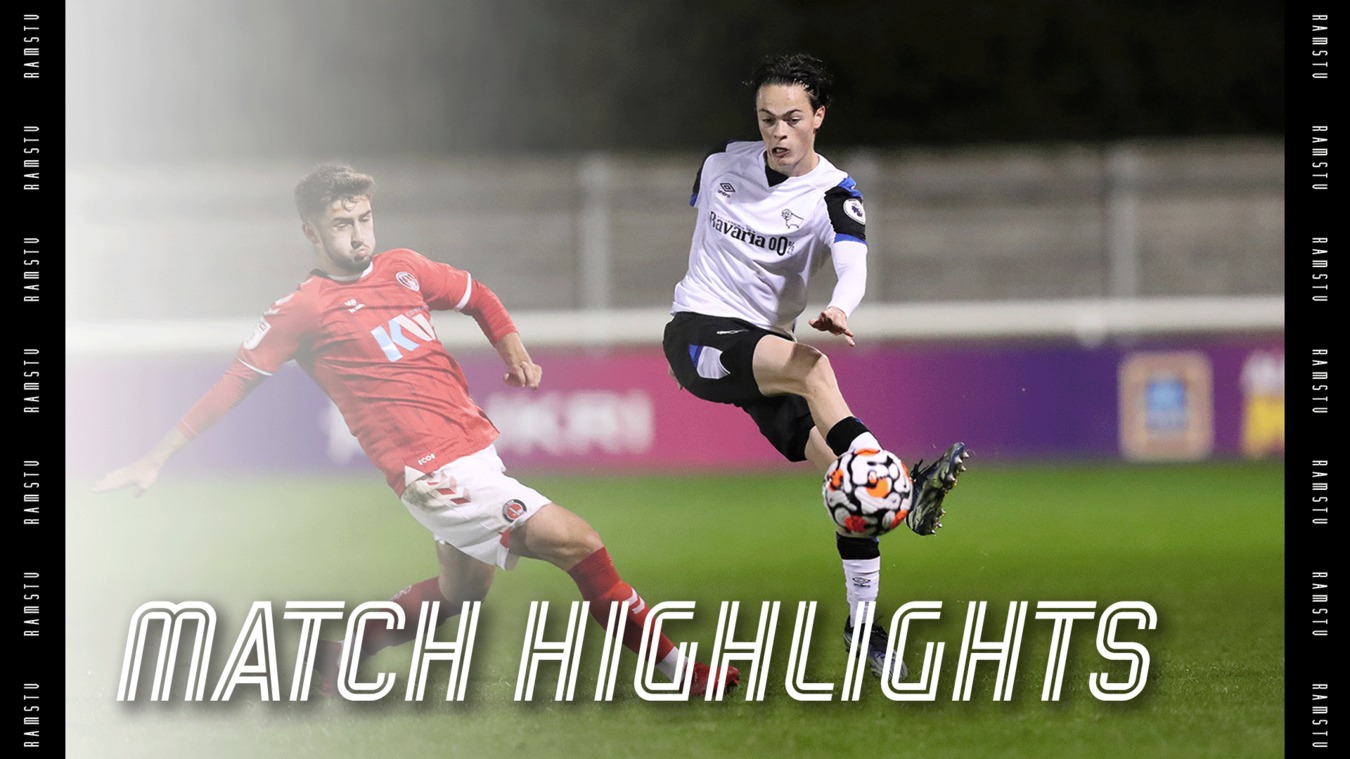 Lyons: “We’re In Good Shape In The Premier League Cup” Derby County’s Under-23s went to the top of Group C in the Premier League Cup with a 2-1 victory over Charlton Athletic on Monday evening.

Luke Plange tapped home from a few yards out just before half-time to open the scoring before Louie Watson blasted home a superb effort from the edge of the box with just over 20 minutes remaining to double their lead.

It wasn’t straightforward for the Rams, however, as they had to see out the latter part of the game with ten men after defender Max Bardell was sent off for a second bookable offence.

Ben Dempsey hauled Charlton back into the game soon after Bardell’s dismissal and that meant it was a case of all hands on deck for Pat Lyons’ side under the floodlights at Loughborough University Stadium.

Despite some nervy moments, the Rams did what they needed to do to pick up all three points to move to the top of Group C with four points from their opening two matches of the competition.

First-team quartet Festy Ebosele, Kornell McDonald, Dylan Williams and Watson, all players that are comfortably eligible to feature for the Under-23s throughout the campaign, were named in the starting line-up in order to get match minutes under their belts.

The visitors flew out of the traps and created a goalscoring opportunity inside the opening ten seconds. Harrison Foulkes in the Derby goal stood tall to keep out Johl Powell’s angled effort at his near post to deny Charlton a perfect start.

After McDonald had a low effort from the edge of the box saved following a corner which wasn’t cleared after five minutes, Derby carved out a golden chance 60 seconds later as they began to stamp their authority on proceedings.

Connor Dixon, skipper for the night with Eiran Cashin ruled out due to illness, got away down the left and delivered an inviting ball across the six-yard box. Bartosz Cybulski, with the goal at his mercy after making an excellent run into the penalty area, blasted straight at visiting goalkeeper James Beadle with a first-time effort.

Derby enjoyed plenty of the ball throughout the half and produced some slick attacking football but were, owing to some strong and resilient defending from the Addicks, for the most part unable to make their dominance count in terms of clear opportunities in front of goal.

That all changed in frantic end to the half, however, with the chances coming thick and fast in a breath-taking few minutes.

First Ebosele used his pace to motor away down the right-hand side and into the penalty area, but Beadle positioned himself well to save the wing-back’s effort from around ten yards out.

The Republic of Ireland Under-21 international’s speed was used to good effect in the final minute of the half as Lyons’ side got the goal their performance deserved. Ebosele once more turned on the afterburners to storm down the right-hand side, after winning possession himself, and produced the end product the move deserved as he crossed for Plange to tap home from a few yards out.

The goal was Plange’s second of the season after the former Arsenal striker hit the net in the recent 3-1 defeat at Tottenham Hotspur.

Ebosele forced another save from Beadle in added time after once again advancing down the right and into the box, while Dixon saw a low drive cleared off the line by a Charlton defender from the resultant corner.

There was almost a twist in the tale in the final seconds of the half as the visitors caught Derby on the break. Charles Clayden and Mason Burstow combined well with the latter crossing to Jeremy Santos at the far post, but Foulkes made another important stop from his first-time strike.

The Derby custodian was called into action moments after half-time too, with Charlton starting the second half brightly, as he had to dive bravely at the feet of Burstow as he prepared to shoot after managing to shake off the attentions of McDonald inside the area.

The visitors should have levelled the scoreline after 53 minutes as Burstow sent Powell clean through on goal but, with just the onrushing Foulkes to beat, his composure was somewhat lacking and he slid his effort wide of the right-hand post.

Derby’s lead was doubled on 68 minutes on the clock - and it was a moment of quality from Watson to strengthen their grip on the game as he marked his first Under-23s appearance of the season with a goal.

A free-kick from the Rams’ left-hand side wasn’t sufficiently cleared by the visitors and Watson, with space on the edge of the box, lashed a superb right-foot effort low beyond Beadle and into the far corner.

Almost immediately however, with Watson’s goal proving to be his final act before being substituted, Derby were hit with a blow as Bardell picked up his second yellow card of the evening for a foul as Charlton burst forward.

The visitors probed for a way back into the game and skipper Dempsey pulled a goal back with 15 minutes remaining to set up a tense ending to a thrilling cup clash. The midfielder drove towards the edge of the Derby box and, with his right-foot, he curled a fine effort beyond the reach of Foulkes from 18 yards out.

Substitute Ossie Aghatise nearly restored Derby’s two-goal cushion with ten minutes remaining as he curled an effort goalwards from inside the box, but Beadle was alert at his near post to deny the Rams’ midfielder.

Deji Elerewe should have levelled for Charlton as the minutes ticked away and it proved to be a big let-off for Derby. The defender rose highest to a left-wing cross but he couldn’t keep his header down from close range and the ball flew over the crossbar.

Charlton continued to ask questions of the Rams as eight minutes of added time were played but Lyons’ side stood firm and were well organised from front to back as they saw the game out well to pick up a deserved victory.

Derby’s Under-23s are back in Premier League 2 - Division 1 action with a trip south to face Chelsea on Saturday afternoon (1pm kick-off), while their next Premier League Cup tie will see them host Reading on Thursday 18th November (7pm kick-off).