Derby County Under-18s were crowned Under-18 Premier League Champions after a 5-2 victory over Arsenal at Pride Park Stadium. 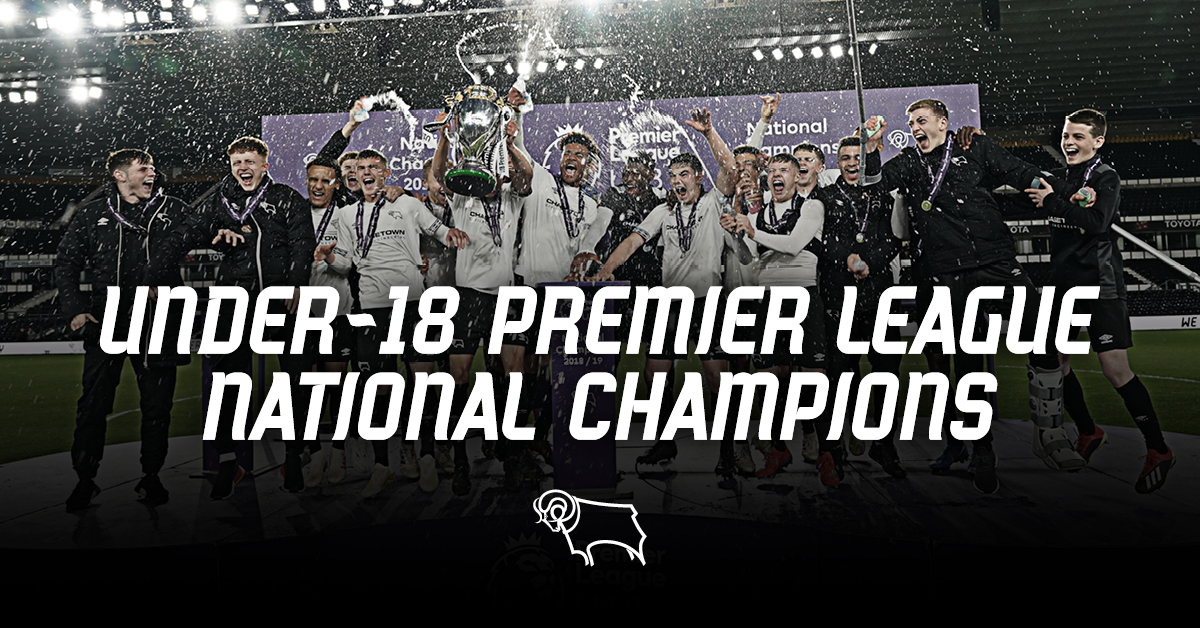 Having claimed the Premier League – North title at the weekend, the young Rams took on the Southern Division champions and ran out as convincing winners to book their place in next seasons UEFA Youth League.

A shaky first five minutes saw the home side go a goal behind through Bukayo Saka’s low strike. However, from then on Derby were in complete control with Archie Brown the star in in a team full of terrific performances.

The young wide-man was involved in four of the goals, drawing the score level, before providing the assist for Morgan Whittaker to find his 23rd goal of the season with a fine finish. Brown then extended the Rams’ lead before the break with his deflected effort from range before coolly firing in to complete his hat-trick in the second half.

The Gunners pulled one back with eight minutes left to play as Saka got his brace, before Tyreece John-Jules missed a penalty to come within a goal.

Whittaker, however, added the final touches in added time.

Arsenal struck first inside five minutes when Saka’s low strike found the bottom left corner as the Rams looked to settle into the game.

However, from then on Justin Walker’s side were fully in control and on the front-foot.

In the 14th minute Brown capitalised on the Rams’ dominance when he out-paced his marker, Vontae Daley-Campbell, as they chased down in the box from a long-ball by Louie Sibley. Arsenal ‘keeper Tom Smith met the ball first but could only flick it up for the Rams’ winger to tap home.

Three minutes later, Sibley did brilliantly to evade two markers to unleash a shot from outside the area, but it was a comfortable save for Smith. Straight down the other end and a superb instinctive save by Sam French denied Trae Coyle from close range.

The Rams continued to push for the lead with Jason Knight’s cross to Sibley was headed just over. But two minutes later they had the deserved lead. Jason Knight did well to keep on his feet on the edge of the box and feed to Brown. The winger found Whittaker who rifled his effort from range and the superb finished struck the post before firing into the back of the net.

With just over ten minutes to play in the half, Brown added another to his goal and assist. Whittaker drove down the middle of the pitch before laying off to Brown just outside the area. His low effort took a deflection in its way in.

As the Gunners looked for a way back into the game, French was called into action again 15 minutes after the restart. Ben Cottrell struck from range, but it was equalled by the Rams’ keeper.

However, their hopes for a comeback were thwarted with 24 minutes left to play as Brown grabbed his hat-trick. Tyree Wilson set him up and the wideman coolly lashed his effort into the roof of the net.

Saka pulled one back for the Gunners when he fired in from a tight angle with eight minutes left to play and it looked to become a tense final moments as the visitors were awarded a penalty for a tackle on John-Jules. Arsenal’s forward took the spot kick himself but dragged it wide.

There was time for one more in added time when Sibley drove into the box and fed wide to Whittaker to add the finishing touches and round off a stunning evening.