Jordon Ibe marked his return to action with a goal two minutes into the game, curling into the top corner from inside the penalty area.

Southampton did equalise just before the half hour mark as his free kick from 25 yards gave Emmanuel Idem no chance.

The game turned on its head on the hour mark as Southampton defender Allan Tchaptchet was dismissed for a last-man tackle on Jahmal Hector-Ingram.

From the resulting free kick, Morgan Whittaker found the bottom corner, whilst with only minutes remaining, Kornell McDonald made the points safe as Derby picked up all three points.

It was a welcome return to action for Krystian Bielik, who made his first start since suffering an ACL injury for the Under-23s in January.

The Polish international had spent 10 months on the sidelines but was able to start alongside new signing Ibe who was also getting his first minutes for the club since signing permanently in September.

And he couldn’t have wished for a better start as he gave the Rams the lead after only 90 seconds. Ibe received a pass from Louie Watson inside the box, took a touch and found the top corner to give Derby a perfect start.

It was a fast start from the Rams who could have also had a penalty minutes later as Jahmal Hector-Ingram went over in the box, but the referee waved away the protests.

At the other end, Derby goalkeeper Emmanuel Idem had to be alert to deny Saints striker Ramello Mitchell.

The visitors started to work their way back into the encounter and managed to find an equaliser through Slattery, who had been booked earlier in the half. He whipped a free kick from 25 yards into the corner, leaving Idem with no chance.

Bielik’s involvement in the game grew throughout the half. He was intelligent in his play, making key interceptions, and also had a chance to score, but his header was saved by Southampton goalkeeper Harry Lewis.

Derby had two golden opportunities to take the lead before the half time interval, with both chances falling to Morgan Whittaker. 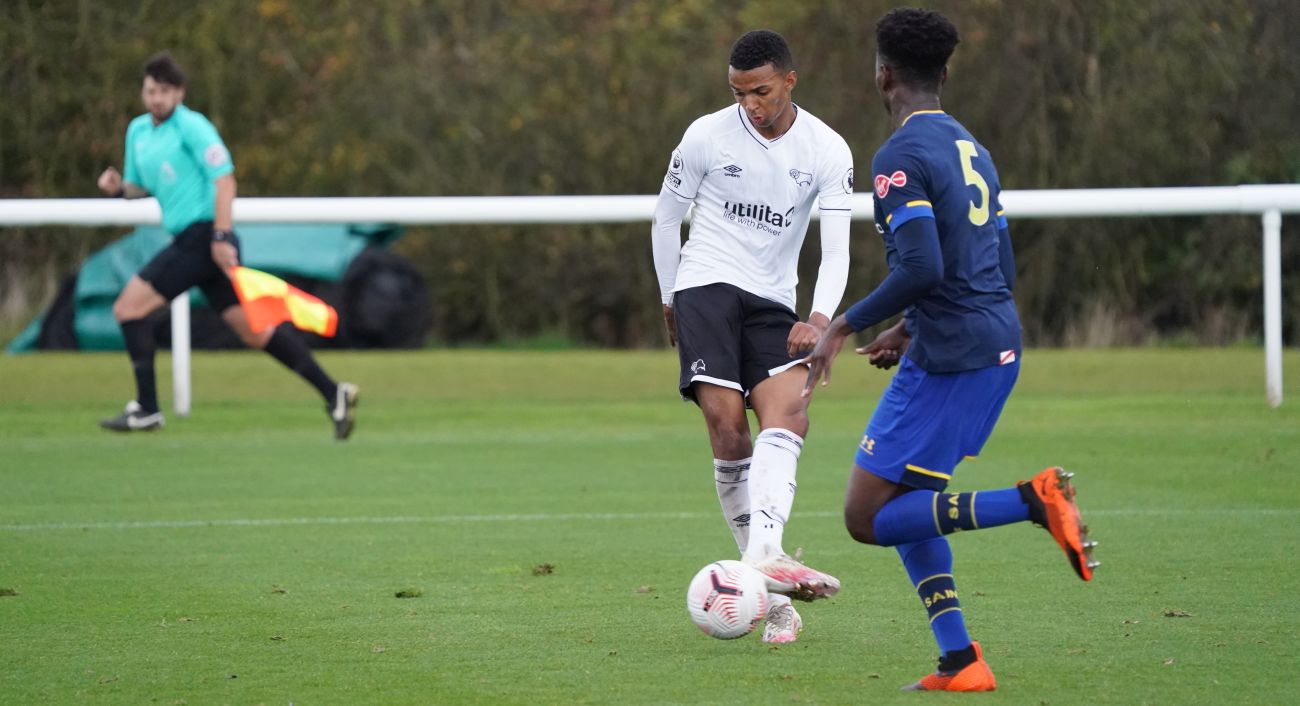 The forward was denied by goalkeeper Lewis 10 minutes before the break, whilst five minutes later, he was sent through on goal by Hector-Ingram but struck wide.

Ibe’s return to action lasted 45 minutes as he was replaced at half time by Josh Shonibare.

The Rams created the better of the chances in the second half with Whittaker again causing problems for Southampton.

His free kick on 55 minutes stung the palms of the Saints goalkeeper, but that would prove to be a tester for what was to come.

Just after the hour mark, Southampton were reduced to 10-men after defender Tchaptchet was sent off for a last-man tackle on Hector-Ingram. Whittaker took the free kick on the edge of the box and whipped it into the bottom corner to restore Derby’s lead.

Bielik’s afternoon came to end on 65 minutes as he was replaced by Connor Dixon. He enjoyed a positive afternoon following his return to fitness.

On the pitch, Idem made a stunning tip over the crossbar from a free kick from Will Ferry to keep Derby ahead before Watson really should have made the afternoon comfortable.

He raced on to a cross to the back post under no pressure but could not divert his effort on target.

However, with only three minutes remaining, Derby did find the goal to ensure they picked up all three points.

McDonald, who was solid at the back all afternoon, played a one-two with substitute Jack Stretton, received the ball in the box and somehow headed home from close range to seal a comfortable win for the Rams.