Roberts joined Brighton’s Academy set-up in 2015 and worked his way through the youth ranks to earn professional terms.

He marked his first-ever career appearance with a goal as Brighton fell to a 3-1 Carabao Cup loss at home to Aston Villa.

Roberts went on to feature for the Seagulls’ Under-23s in the Papa Johns Trophy that season in their matches against Southend United, Leyton Orient and Newport County. He also racked up 14 appearances in Premier League 2 for the Seagulls.

After two further Carabao Cup appearances, in wins over Portsmouth and Preston North End, and a single Papa Johns Trophy outing, Roberts enjoyed a loan spell in League One with Rochdale during the 2020/21 campaign.

The defender made 26 appearances in all competitions, gaining valuable EFL experience before returning to his parent club.

He spent the 2021/22 season back with Brighton and his development continued with three more Carabao Cup appearances, this time against Cardiff City, Swansea City and Leicester City, as well as one more Papa Johns Trophy run out. He also made nine appearances for Brighton’s Under-23s in Premier League two over the course of the campaign.

Roberts joined the Rams on a season-long loan deal, linking up with Liam Rosenior who was his youth coach in the Under-23s set up at Brighton.

On the international stage, Roberts has been capped 14 times by England at Under-17 level and five times for the Under-18s. Roberts: “I’m Buzzing To Be Here” 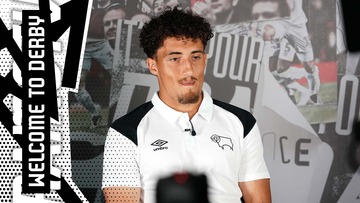