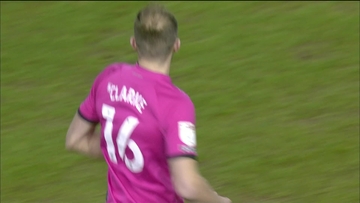 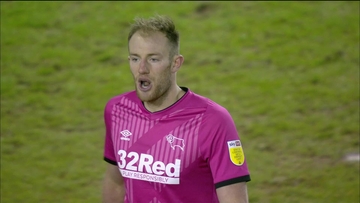 Defender Matthew Clarke agreed to spend a second successive campaign at Derby County on a season-long loan deal from Premier League side Brighton & Hove Albion in the lead-up to the 2020/21 campaign.

Clarke spent the entire 2019/20 campaign on loan at Pride Park Stadium from the Seagulls and his impressive showings saw him crowned as the Jack Stamps Player of the Season.

It was his third Player of the Season accolade in as many seasons, having won the award in back-to-back seasons at Portsmouth prior to joining Brighton.

The central-back enjoyed a fine 2019/20 campaign for Derby, making 37 appearances in all competitions and scoring one goal.

His single goal came in a 1-0 home victory over Hull City in January of this year, but it was his consistent performances at the back which saw him become a popular figure amongst supporters.

After impressing on his debut in a 2-1 opening day victory over Huddersfield Town at the John Smith’s Stadium last August, Clarke established himself as a key player at the heart of the defence.

Whilst he had to adapt his game to suit the style the side played, he remained solid and consistent in his performances.

Clarke, who has made over 200 appearances in club football, will now spend the second successive season with Derby.

Clarke began his career with Ipswich Town and came through the youth ranks at Portman Road. He made his professional debut in August 2014, in the EFL Cup against Crawley Town, before signing his first professional contract a month later.

The defender linked up with Portsmouth, then in League 2, on loan in August 2015 to gain further first-team experience and he went on to spend the entire 2015/16 campaign at Fratton Park, before signing on a permanent basis in the summer of 2016.

Clarke was an influential figure in the Portsmouth side that claimed the League 2 title in 2016/17, with the defender making 36 appearances in all competitions as they recorded the best defensive record in the division.

He, and Pompey, quickly adapted to life in League 1 as they finished in 8th place in 2017/18. Portsmouth went one step further in 2018/19 as they claimed a top six spot and reached the play-off semi-finals, while they were also the winners of the Checkatrade Trophy Final against Sunderland at Wembley Stadium.

Clarke’s performances and influence, despite his young age, saw him wear the captain’s armband for Pompey. His move to the top-flight was secured last summer as he became Graham Potter’s first signing at Brighton & Hove Albion for an undisclosed fee. Derby Quartet Named In WhoScored.Com Team Of The Month

TEAM OF THE MONTH