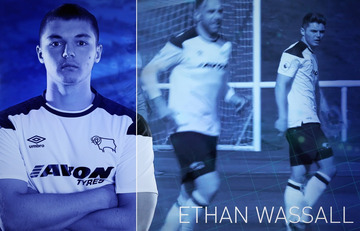 Ethan Wassall got his first taste of first-team football during the 2018/19 campaign while on loan at Hereford.

The centre-back and son of Academy Director, Darren Wassall, spent a month with the National League – North side where he slotted straight into the team and made five appearances. He was joined in Hereford with his Under-23s teammate Matt Yates.

The defender also made 12 appearances in the Premier League 2 Division 1 last campaign, captaining the side in the final match against Tottenham.

Wassall has developed through the Rams Academy, impressing during his apprenticeship, captaining the Under-18s side and also making the step up to the Under-21s at just 17-years-old in the 2015/16 season.

A towering defender, having been converted from a winger, earned his first professional contract in October 2015. However, his season was ended prematurely through injury and he was forced to miss a large part of following season (2016/17) as well. 02:55
Wassall Looks Ahead To 'Massive Game' Against Tottenham