Versatile forward Lewis Dobbin joined Derby County on loan from Premier League side Everton for the 2022/23 campaign in early August 2022.

A graduate of Everton’s youth set-up, his ability to perform in various attacking positions added further option for the Rams in the final third.

Loaned to Pride Park Stadium by former Derby boss Frank Lampard, Dobbin made five first-team appearances for the Toffees before linking up with the Rams.

Stoke-on-Trent born Dobbin linked up with Everton’s Academy at the age of 11 and has progressed through the ranks at Goodison Park.

Regarded as a skilful and pacey striker who combines intelligent movement with ruthlessness in front of goal, Dobbin was named as Everton’s Under-18s Player of the Season in 2019/20 after hitting an eye-catching 11 goals in 16 league matches.

Dobbin also made his Everton Under-21s debut and signed his first professional contract during the same season, although his progress was hampered owing to a knee injury in the following 2020/21 campaign.

After returning to fitness and stepping up to the Under-21s in Premier League 2 he netted six goals in 18 league appearances in the 2021/22 season, as well as providing two assists. He also featured on four occasions in the Papa Johns Trophy for Everton’s Under-21s.

Dobbin made his senior debut for Everton’s first team in their 2-0 Premier League win over Norwich City in September 2021, coming on as a late substitute for Alex Iwobi at Goodison Park.

The forward made a further two league appearances for the Toffees in 2021/22, coming off the bench in 1-1 draws at Manchester United and Chelsea. In addition, he was introduced into the action as a substitute in their Emirates FA Cup wins over Hull City and Boreham Wood in January and March.

His progression over the course of the campaign also saw him rewarded with a new long-term deal.

On the international stage, Dobbin joined Derby after hitting eight goals from 20 appearances for England at youth international level. He scored three times from eight matches at Under-16 level, followed by an impressive five goals in ten Under-17 outings. He also played twice for the Under-19s, although he didn’t find the back of the net in either outing. Dobbin: “I Can’t Wait To Get Started” 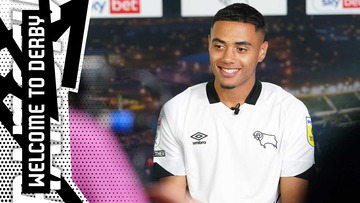