The midfielder, who is at home in the middle of the park but is also more than capable of performing out wide or at right-back, burst onto the scene in the 2019/20 season.

An energetic and all-action player, Knight combines his ability on the ball with his desire and determination out of possession and those qualities quickly made him become an important member of the squad.

After being on the bench for Derby’s Play-Off campaign during the 2018/19 season – following an impressive campaign with the Rams’ title-winning Under-18s and Under-23s - he made his senior bow as a substitute on the opening day of the 2019/20 season at Huddersfield Town.

He went on to make his first-ever career start in the 1-0 Carabao Cup First Round victory at Scunthorpe United just over a week later and made his first league start before August was out.

Knight remained a regular throughout the campaign and made 35 appearances in all competitions, while he also weighed in with a healthy return of six goals.

His first two professional goals came in a much-needed 2-1 victory over Charlton Athletic in December 2019 at Pride Park Stadium on what was a night to remember for the Irishman.

Knight’s performances across the campaign were rewarded with a new contract and also a nomination for the Sammy Crooks Young Player of the Year accolade.

The Irishman started the 2020/21 campaign as a key member of the Derby County line up and played every minute for the Rams in the opening two months of the season.

His form earned him recognition on the international stage as he made his Republic of Ireland bow in a Nations League fixture against Finland in October 2020.

He added another two league goals to his tally in December 2020, scoring the only goal against Millwall at the start of the month, whilst at the end of the month, he fired a fourth goal against Birmingham City in a convincing victory.

Knight's form saw him nominated for the Sammy Crooks Young Player of the Season once again, but he lost out to fellow Academy graduate Lee Buchanan.

In June 2021, Knight scored his first international goal for the Republic of Ireland in a friendly fixture against Andorra.

The midfielder surpassed 100 league appearances for Derby County during the 2021/22 campaign in a 2-0 victory over Sheffield United at Pride Park Stadium.

In total, the midfielder made 39 appearances for the Rams that season, scoring two goals in total. 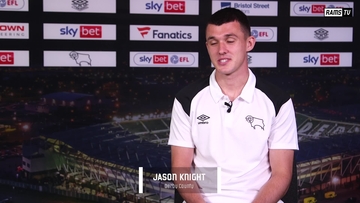 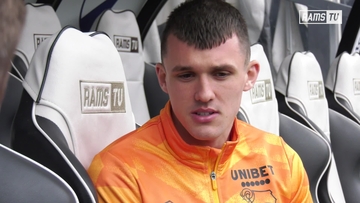