Midfielder Korey Smith signed a two-year contract with Derby County in July 2022 following his release from Swansea City and became another new addition to the revamped Rams’ squad.

The 31-year-old possesses great technical quality and will add valuable experience to the Rams’ squad as they take on Sky Bet League One this season.

Smith’s playing career began at Norwich City and, after coming through their youth set-up, he penned professional terms.

His senior debut in the Canaries’ first team came towards the end of the 2008/09 campaign, but he made a big impact in the following season, making 40 appearances, as City won the League One title.

Smith was also a regular, with 30 appearances, as City won back-to-back promotions to the Premier League in the 2010/11 season.

As City stepped up to the top tier, Smith’s first-team opportunities became limited in the 2011/12 and 2012/13 campaigns and he had loan spells at Barnsley in the Championship and League One duo Yeovil Town and Oldham Athletic.

Smith joined Oldham permanently in the summer of 2013 and was installed as their captain, playing 51 times in all competitions.

He was on the move again a year later, this time joining Bristol City, and his debut campaign at Ashton Gate in 2014/15 saw him play an instrumental role in their League One title and EFL Trophy successes. His performances on the pitch also saw him rewarded with a place in the League One Team of the Season by his peers.

Smith went on to play 196 times for City over the course of six seasons, wearing the captain’s armband and becoming a fan favourite in the process, as they firmly established themselves back in the Championship, as well as reaching the Carabao Cup Semi-Finals in 2017/18, before leaving at the end of his contract in the summer of 2020.

His next port of call was Swansea City, where he penned a two-year deal. He went on to play 77 times across two seasons for the Swans and was a key member of the squad as City reached the 2021 Championship Play-Off Final.

He left the Liberty Stadium following the conclusion of his contract and put pen-to-paper on a two-year deal with Derby County ahead of the 2022/23 Sky Bet League One campaign. Smith Next In At Derby As Summer Rebuild Continues 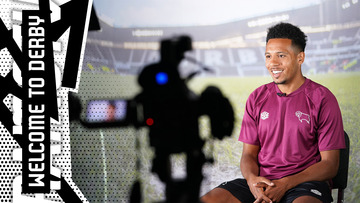