Following a successful trial period with Derby County, exciting full back Kwaku Oduroh put pen-to-paper on a two-year contract with the Rams during the summer of 2022.

Although Oduroh was born in England he is of Ghanaian descent and impressed coming through the youth ranks at Manchester City after joining them at the age of eight.

He captained City’s Under-18s to the Premier League title in the 2020/21 season and his performances earned him a professional contract.

The 2021/22 campaign saw Oduroh feature for City in Premier League 2 - Division 1, as they won the league by six points, while he also appeared in the UEFA Youth League and the EFL Trophy to gain further match experience.

He also had the opportunity to train with Pep Guardiola’s first-team squad over the course of the campaign to sample a taste of competing against players at the highest level in club football.

The defender had a brief trial spell with Tottenham Hotspur towards the end of the campaign prior to his contract coming to an end at City.

Over the summer of 2022, the defender spent time with Derby County and impressed in a pre-season friendly against Bradford City. He went on to sign a two-year contract with the Rams. Oduroh: “I Really Liked The Sound Of The Project” 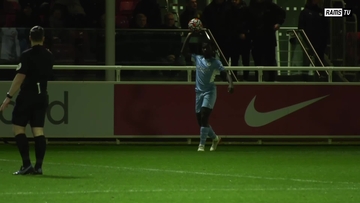