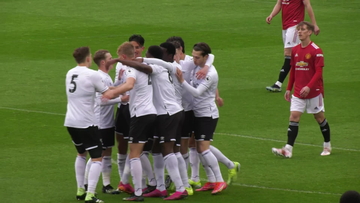 Olamide Ibrahim had an impressive debut campaign in the Rams' Academy appearing for the Under-18s, Under-23s as well as a bench appearance for the first-team.

A central midfielder with a goalscoring mind, Ibrahim was previously on the books of both Manchester City and, more recently, Manchester United prior to joining Derby’s youth system as a First Year Scholar for the 2020/21 season.

Upon his arrival at Moor Farm, Ibrahim was called up to train with the first-team during pre-season and earned himself a place on the bench in the EFL Cup clash against Preston North End by September.

In January, Ibrahim came off the bench in the FA Cup defeat against Chorley, in which Derby County were forced to field a team completely of Academy players as the first team players and staff were in isolation due to a COVID-19 outbreak.

Back with his own age-group, the midfielder made 20 appearances for the Under-18s over the course of the season, scoring twice while providing five assists.

He also made nine appearances for the Under-23s, scoring in the final home game of the season against his former team Manchester United.