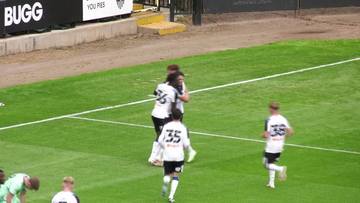 Central defender Eiran Cashin is now in his second season as a permanent member of Derby County’s Under-23 squad.

He appeared 26 times for the Under-18s in their title-winning 2018/19 season, weighing in with five goals along the way.

His progress continued in 2019/20 as he registered 17 appearances and two goals for the Under-18s, as well as stepping up to the Under-23s and making a single appearance for Pat Lyons’ side.

On top of that, he played in all six of the Under-19s UEFA Youth League fixtures as he gained more valuable experience and scored in their impressive 3-1 win over Borussia Dortmund in early 2020.

At the end of the season, the Republic of Ireland youth international put pen-to-paper on his first professional deal with the Rams.

Cashin was hampered by injury for the majority of the 2020/21 season, making his first appearance for the Under-23s in February.

His six appearances, all starts, for the Under-23s were enough to catch the eye of Wayne Rooney, who named the defender on the bench for the final three games of the Sky Bet Championship season while he also impressed with the first-team during pre-season ahead of the 2021/22 campaign.