Derby County earned their first victory of the new Sky Bet Championship season following a 1-0 victory against Hull City at the MKM Stadium. 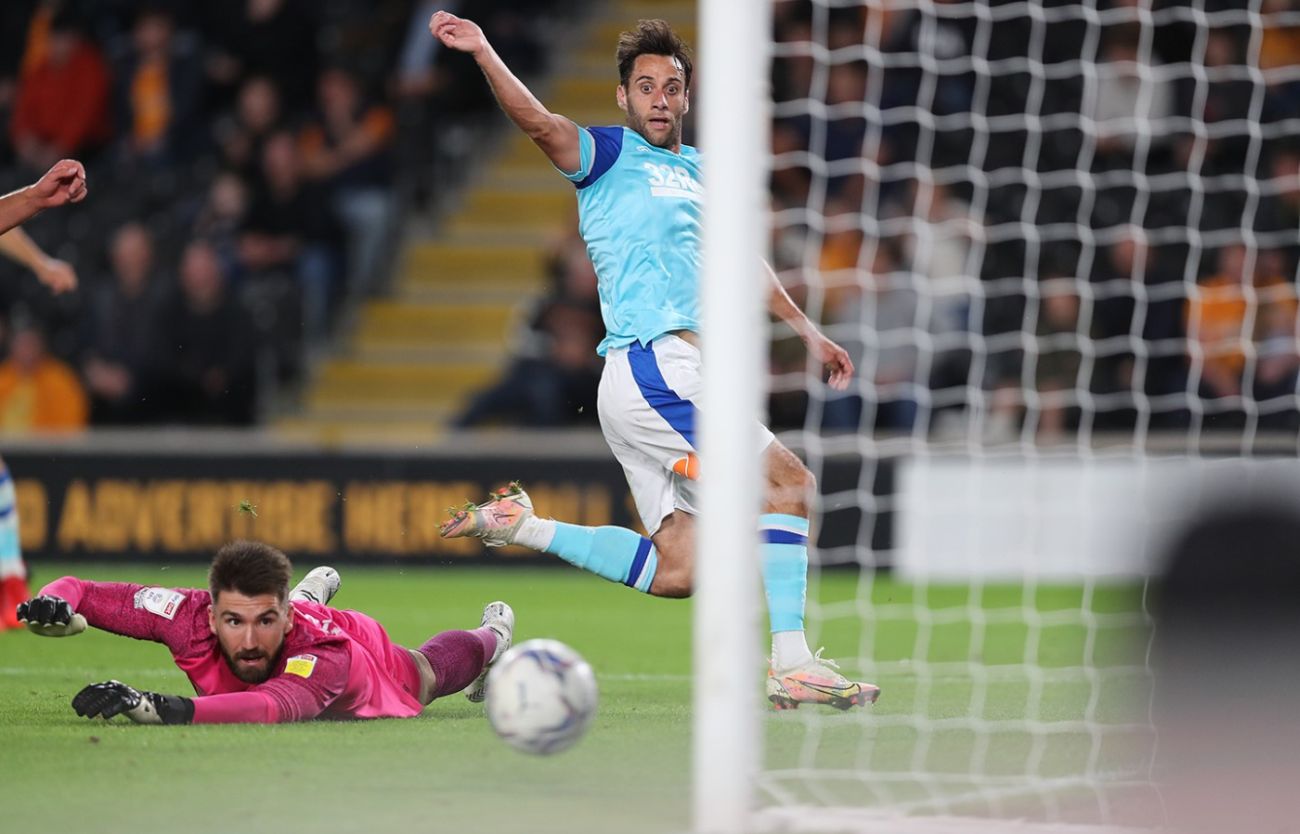 It was a debut strike from Sam Baldock which clinched the three points for the Rams in East Yorkshire as he pounced on a rebound to score the only goal of the game.

The Rams were good value for their victory as they created a number of chances throughout the first half especially. Kamil Jozwiak was denied by the post whilst Baldock saw an effort saved at the end of the half.

And after Baldock had given the Rams the lead, Wayne Rooney’s side saw the game out professionally as they limited their opponents to half chances as they recorded their first three points of the campaign. 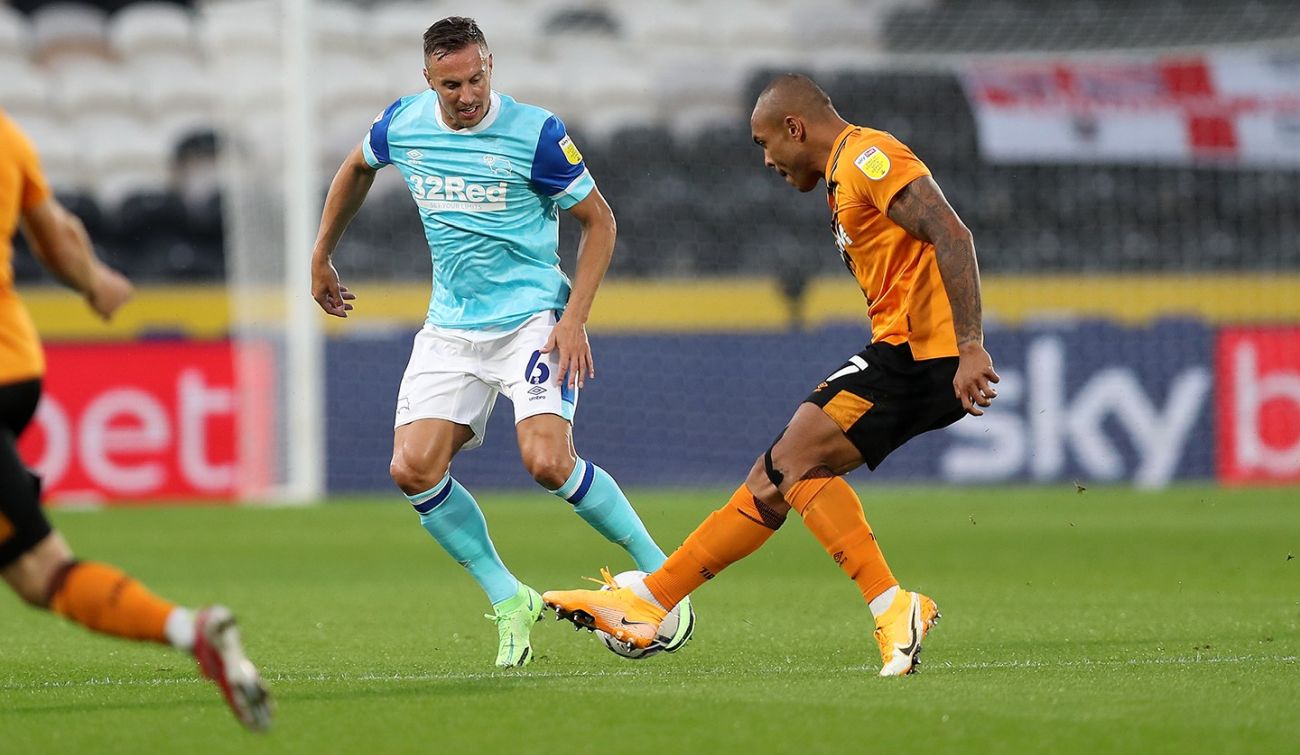 Manager Wayne Rooney made five changes to the side which faced Peterborough United on Saturday as Phil Jagielka and Baldock were handed their debuts.

And the Rams settled into the game nicely as they dominated large parts of the game and could have been ahead on a number of occasions in the first half.

The returning Lee Buchanan, who had missed the start of the season through injury, drove in from the left-hand side and found Kamil Jozwiak on 11 minutes. The winger himself raced into the open space and shot from 18-yards but fired wide of the goal. 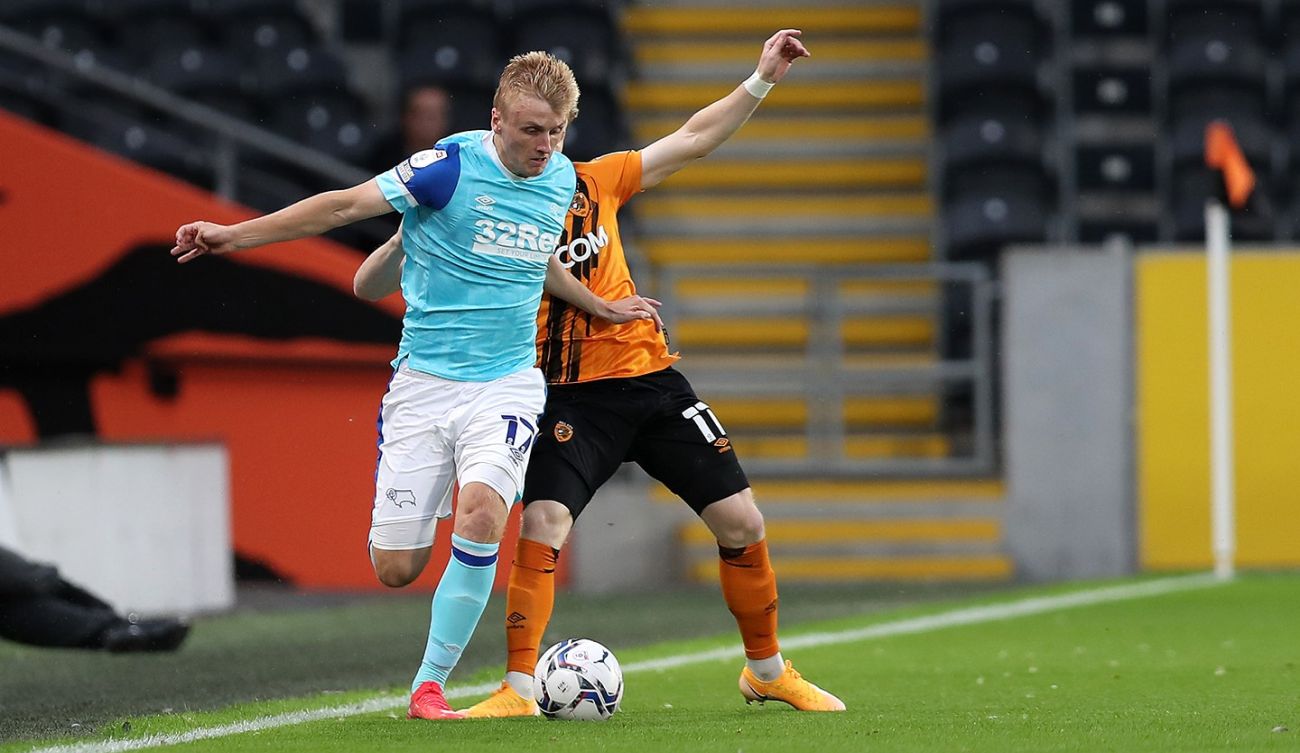 Derby played some neat football in the early exchanges and nice intricate play around the penalty area forced the Rams’ next chance on target three minutes later.

Ravel Morrison found Baldock on the edge of the box who played it through to the onrushing Louie Sibley who saw his shot saved by Matt Ingram in the Hull City goal.

But, Derby were proving to be a threat in attack. Morrison was proving a threat in the middle of the park and found pockets of space which looked to expose the opposition as he went close on 18 minutes. He played a neat one-two with Sibley on the edge of the box but he shot narrowly over the crossbar. 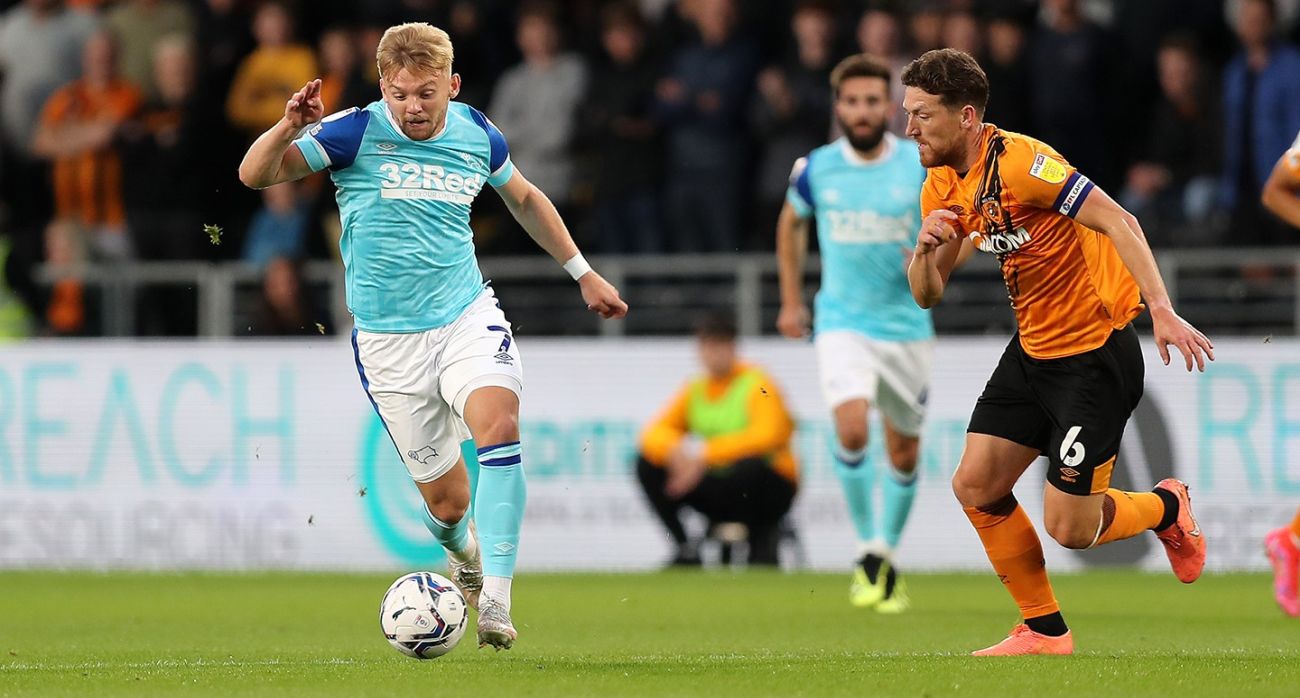 With the Rams on top, they almost took the lead on 20 minutes through Jozwiak. Midfielder Max Bird played an interesting ball over the top for the onrushing Polish international. He controlled excellently as he turned his defender and took aim from inside the box but he fired against the post.

It was an agonising miss, however, Derby didn’t let that missed opportunity deter them as they continued to take the game to their hosts and almost profited from the counter attack.

After a Hull City corner was cleared, a long ball forward was well controlled by Jozwiak as the Rams set up a three on one attack. Morrison, who had the Polish winger and Sibley in attack, elected to go alone and curled towards goal but Ingram was equal to his effort and made a great save. 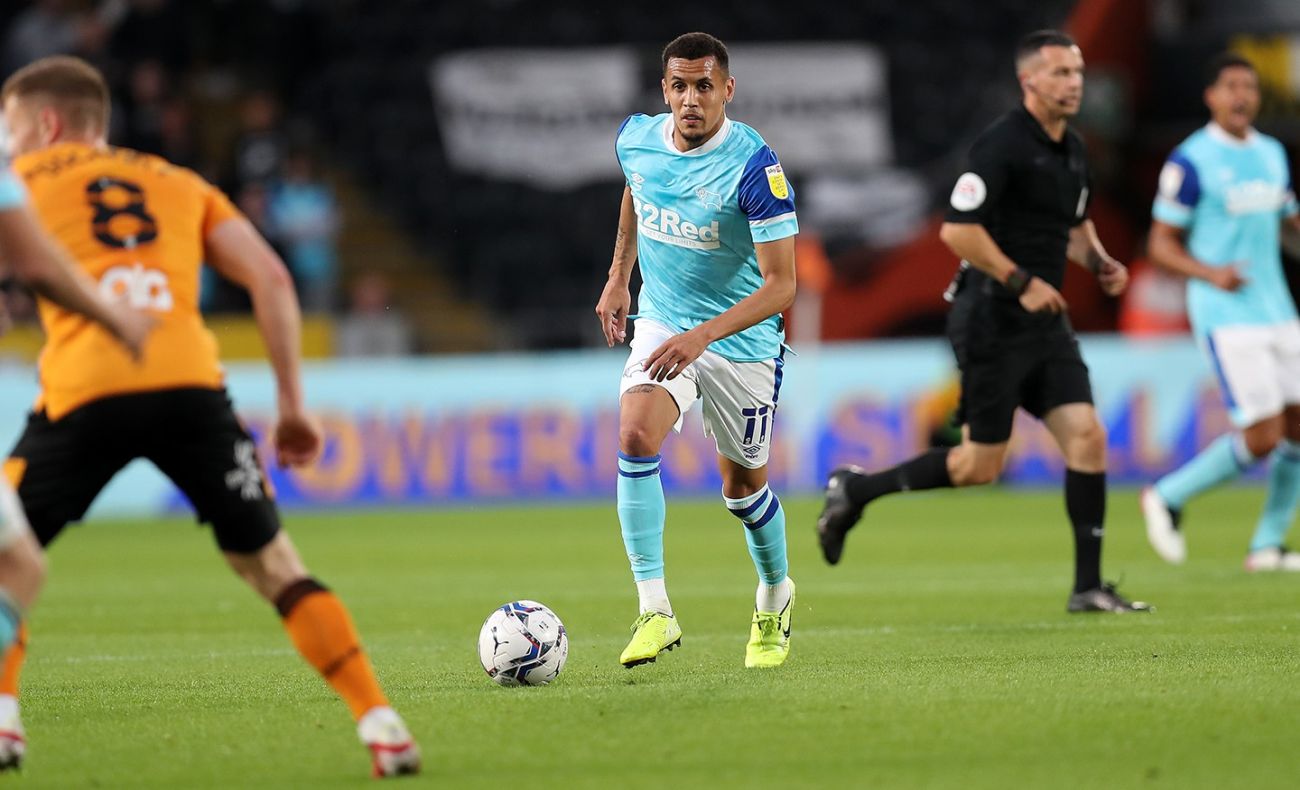 With Derby enjoying the lion’s share of possession, they had to be wary at the other end as Hull City midfielder Greg Docherty found space inside the Rams’ penalty area and shot but his effort went wide.

The home side did start to grow into the encounter before the break, but Derby again went close to taking the lead with five minutes of the half remaining. Graeme Shinnie found Baldock inside the penalty area but his effort was tame and saved by Ingram as the sides went into the break searching for the opening goal.

A positive start to the second half was needed by Derby to ensure they kept up their first half pressure, and with Bird and Shinnie controlling the midfield, it allowed the forwards a chance to express themselves. 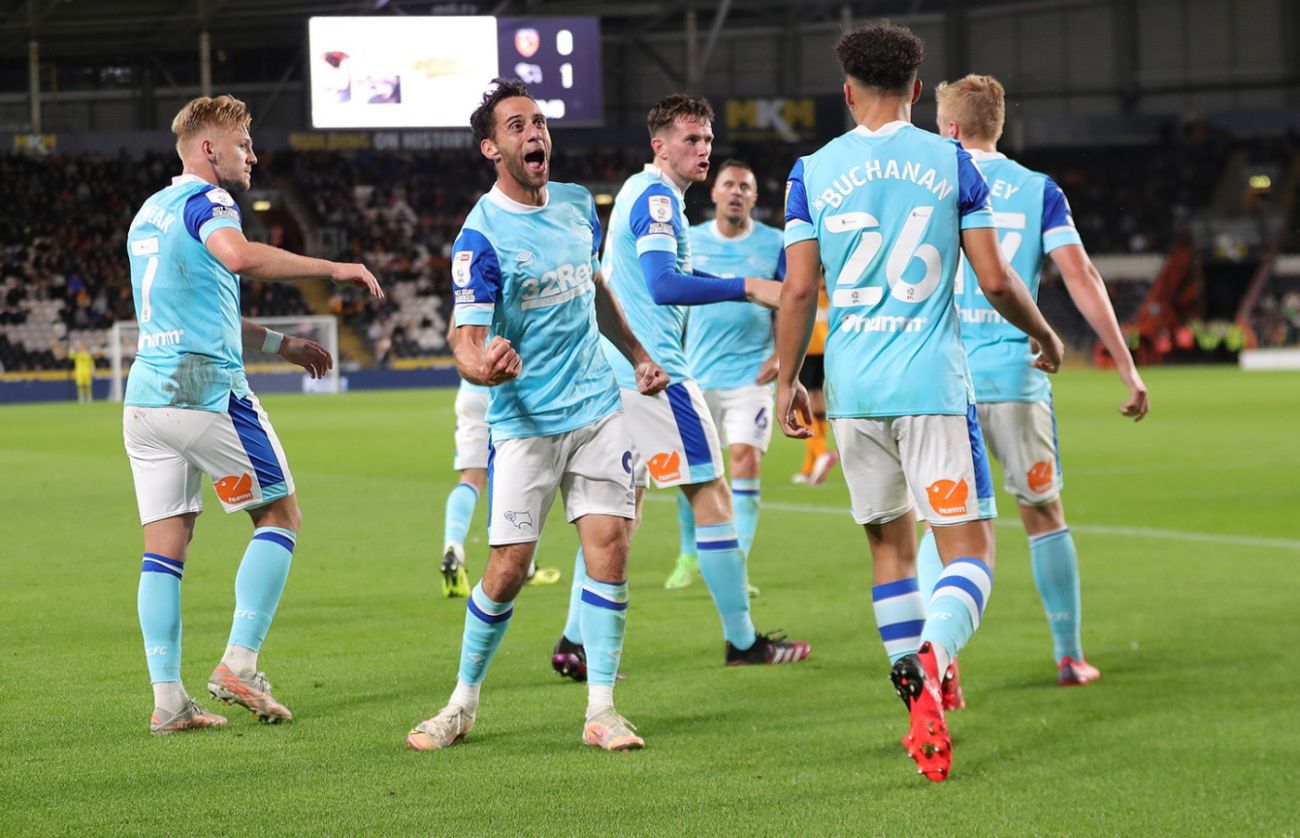 It also created spaces in the wide areas and that’s where the Rams benefitted as they scored the opening goal of the game just before the hour mark.

The ball found its wat to full back Buchanan who unleashed a fierce effort on goal. Hull goalkeeper Ingram spilled the ball in front but Baldock was on hand to net the rebound as he found the bottom corner to put the Rams ahead.

It was no more than the Rams deserved for the chances they created throughout the encounter, and the scoreline was almost doubled 10 minutes later through a free kick from Morrison. 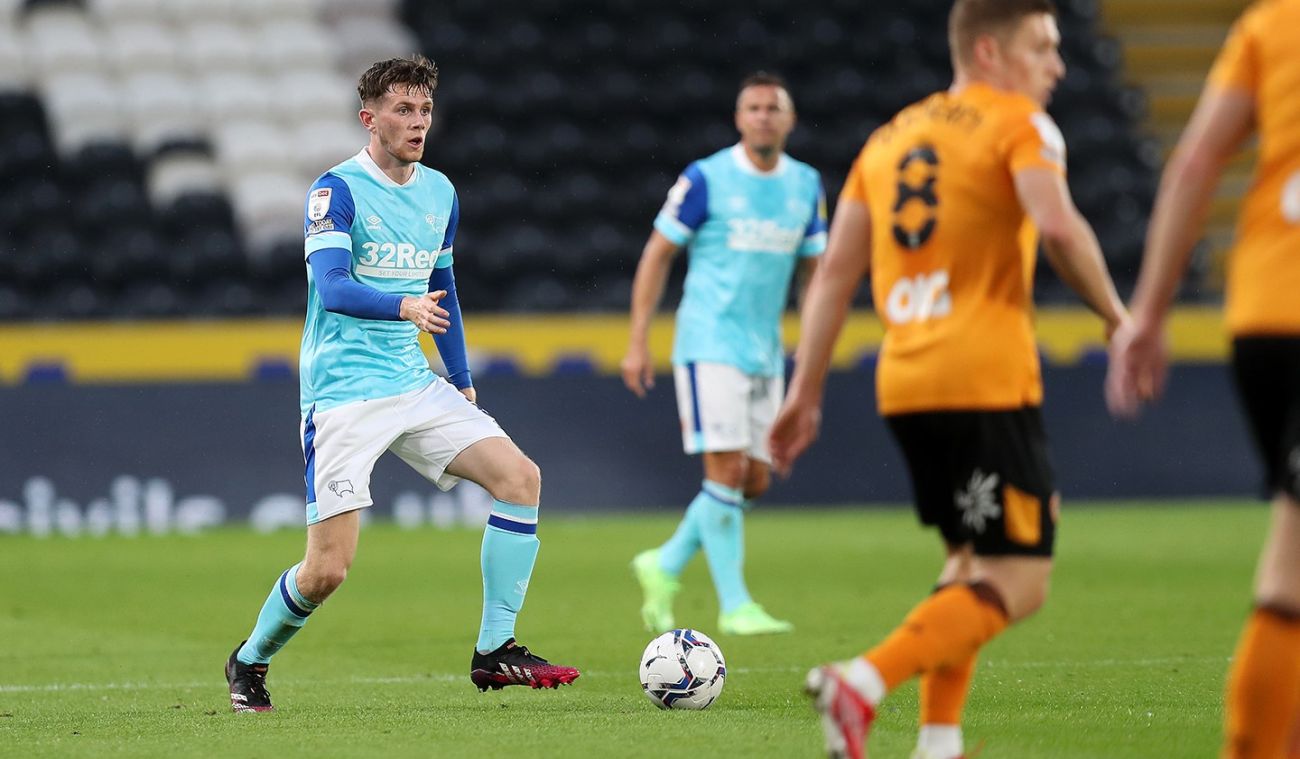 After a free kick was awarded on the edge of the penalty area after Baldock was fouled, he lined up his strike from 20 yards but he struck against the wall.

With Hull throwing caution to the wind, bringing on former Rams Academy graduate Tom Huddlestone for his debut, as well as Tom Eaves and William Jarvis in attack, Rooney himself made changes as he switched to three at the back.

Richard Stearman joined Jagielka and Davies in defence to form a three-man back line and they held the hosts attackers at bay as they entered the final minutes of the game. 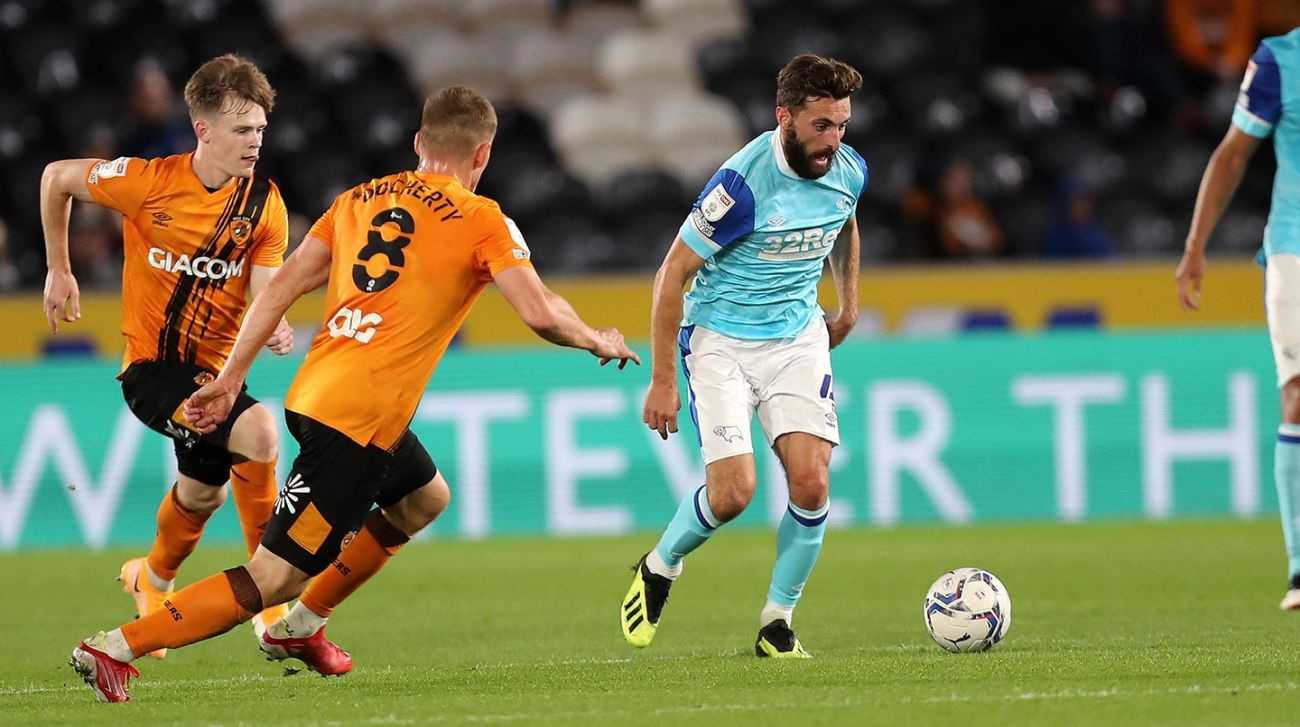 Half chances for the home side were all they could muster as Jarvis’ deflected effort went wide, whilst Lewie Coyle’s effort from 20 yards went wide in additional time.

But, it was a confident performance from the Rams who were good value for the three points at the MKM Stadium after Baldock’s debut goal secured Derby’s first league win of the season.