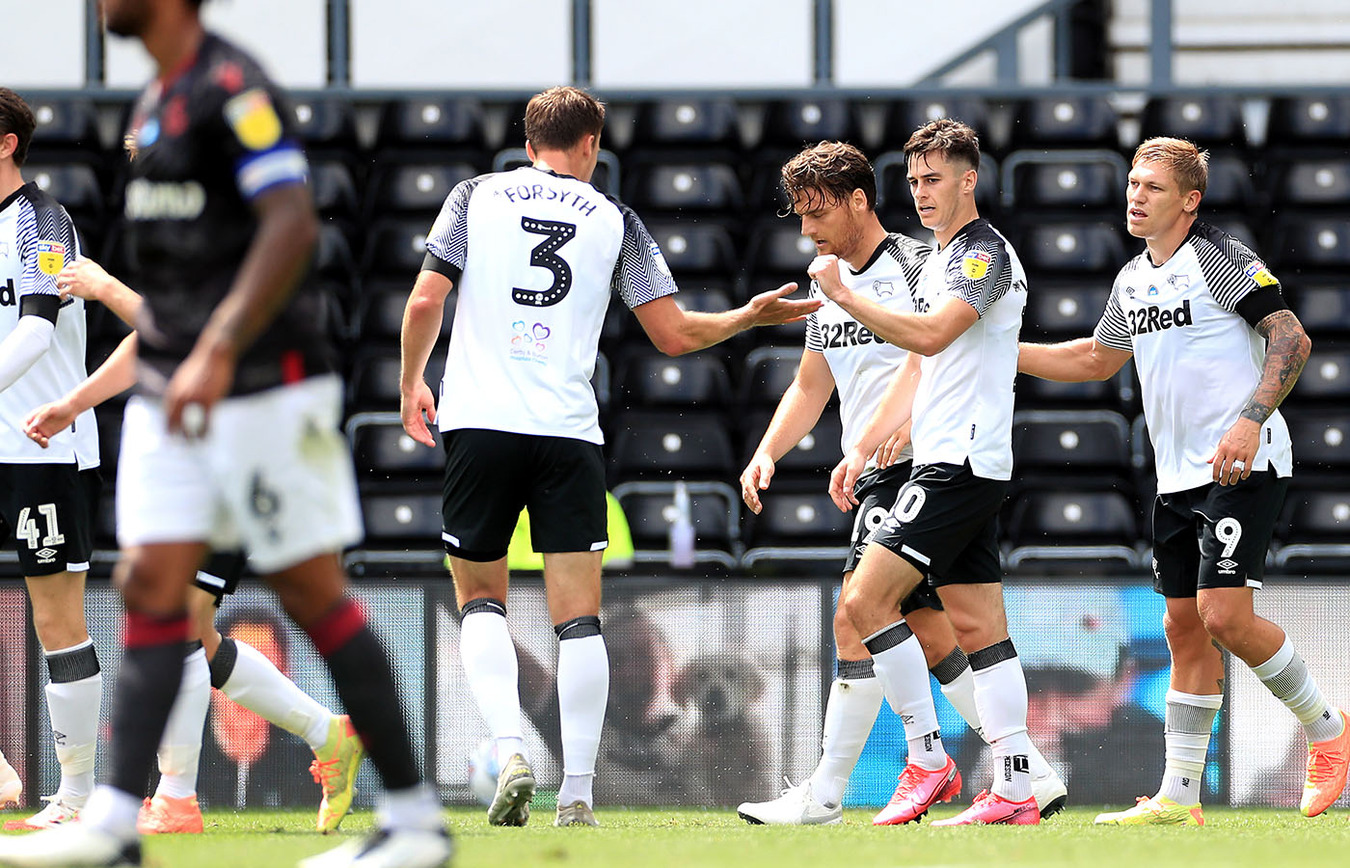 Cocu Offers His Verdict On Derby's Win Over Reading Cocu: “This Is A Very Important Game For Us” Wisdom: “Age Is Just A Number; The Youngsters Are Respected Exactly The Same” Cocu Looks Ahead To Derby's Home Fixture Against Reading On Saturday Ref Watch: Duncan The Man In The Middle For Derby's Meeting With Reading Derby County’s first behind-closed-doors fixture at Pride Park Stadium in the Sky Bet Championship ended in a 2-1 victory against Reading on Saturday afternoon.

Goals late in the first-half from Tom Lawrence and skipper Wayne Rooney fired Phillip Cocu’s side to a fourth successive league win.

Lawrence curled home from the edge of the box in the final minute of the half to round off a flowing team move, before Rooney netted from the penalty spot in added on time after Martyn Waghorn was fouled.

Reading responded after the break and got themselves back into the game as Andy Rinomhota’s long-range header, after Derby failed to clear their lines, halved the deficit.

The visitors enjoyed good spells in the second period, but the Rams showed their resilience to hold on to record another valuable three points and maintain their impressive home record.

Cocu made one change from last weekend's 3-2 victory over Millwall at The Den with striker Chris Martin coming into the starting XI in place of attacking midfielder Duane Holmes, who reverted to the bench after making his comeback from injury against the Lions.

There was also a change amongst the substitutes too with experienced midfielder Tom Huddlestone replacing George Evans in the matchday squad.

Reading, meanwhile, sat just behind Derby in the table ahead of kick-off and returned to action last weekend with a 1-1 draw against Stoke City on home turf.

They made three changes from that game with George Puscas, Andy Rinomhota and Matt Miazga coming into their starting line-up.

After several days of fine weather across the United Kingdom, the players from both sides would have welcomed the cooler temperatures - and a heavy downpour of rain - which greeted them ahead of kick-off.

The Derbyshire sunshine was back and beaming down as Reading got the game started, but the Rams quickly got in control and dominated the possession early on.

Derby registered their first a shot a shot on target after eight minutes as they continued to ask the early questions. Martin’s cushioned header from inside the box picked out Lawrence 20 yards out, but his powerful strike was dealt with by Rafael in the Reading goal.

After 20 minutes, on the counter-attack, Reading had a chance to take the lead. They broke down the left with pace through Ovie Ejaria down the left and he squared to George Puscas in the box, who lashed just over the bar from around 16 yards.

Reading got themselves in another good attacking area just after the half-hour mark but a combination of good defending and goalkeeping from Ben Hamer managed to snuff out the danger as the visitors enjoyed a positive spell.

With just a minute of normal time to play before the break, Derby got themselves in front.

It got better for Derby before the half was out, too. Waghorn was fouled in the box by Reading skipper Liam Moore following another good attacking move and Rooney, cool as ever, sent the visiting goalkeeper the wrong way from the penalty spot to put the Rams in firm control of the contest with his fifth goal for the club.

Cocu’s side were fast out of the traps at the start of the second half too and only a smart save at his near post from Rafael denied Rooney a second of the afternoon direct from a free-kick moments after the restart.

Reading were far from out of the game and they managed to get a goal back just after the hour mark as Rinomhota’s headed effort, after Hamer had punched a cross away, found the back of the net.

That goal prompted a strong spell of Reading pressure as they chased an equaliser and the Rams were prompted into two changes as Holmes and Shinnie were introduced into the action in place of Waghorn and Sibley.

Reading continued to enjoy the better of proceedings after that double substitution, with Derby forced to endure spells without the ball for the first time in the game. Chances were, however, limited and that largely down to the Rams’ strong defensive shape and organisation.

A further two Rams switches followed with just over ten minutes remaining as Rooney and Martin made way for Davies and Knight as Derby entered a key stage of the match.

Cocu’s side managed the closing stages well, particularly with Reading pushing forward in numbers, and did what they needed to do to and ensure they now have the best home record in the Championship with 40 points recorded from 20 matches.

Derby face a quick turnaround for their next fixture with a trip north to take on Preston North End at Deepdale on Wednesday (5pm kick-off) in the first of four successive midweek matches.

Upon the final whistle, there was a sour moment as Lawrence and Reading's Miazga clashed and the duo were duly shown red cards by the Referee.