Cocu Gives His Reaction To Derby's Late Draw With Forest

Derby County Vs Nottingham Forest: Watch From Home On RamsTV Derby County rescued a point in the 97th minute of the game to ensure the Rams extended their unbeaten run to six games, and keep them in the hunt for a Sky Bet Championship play-off place. 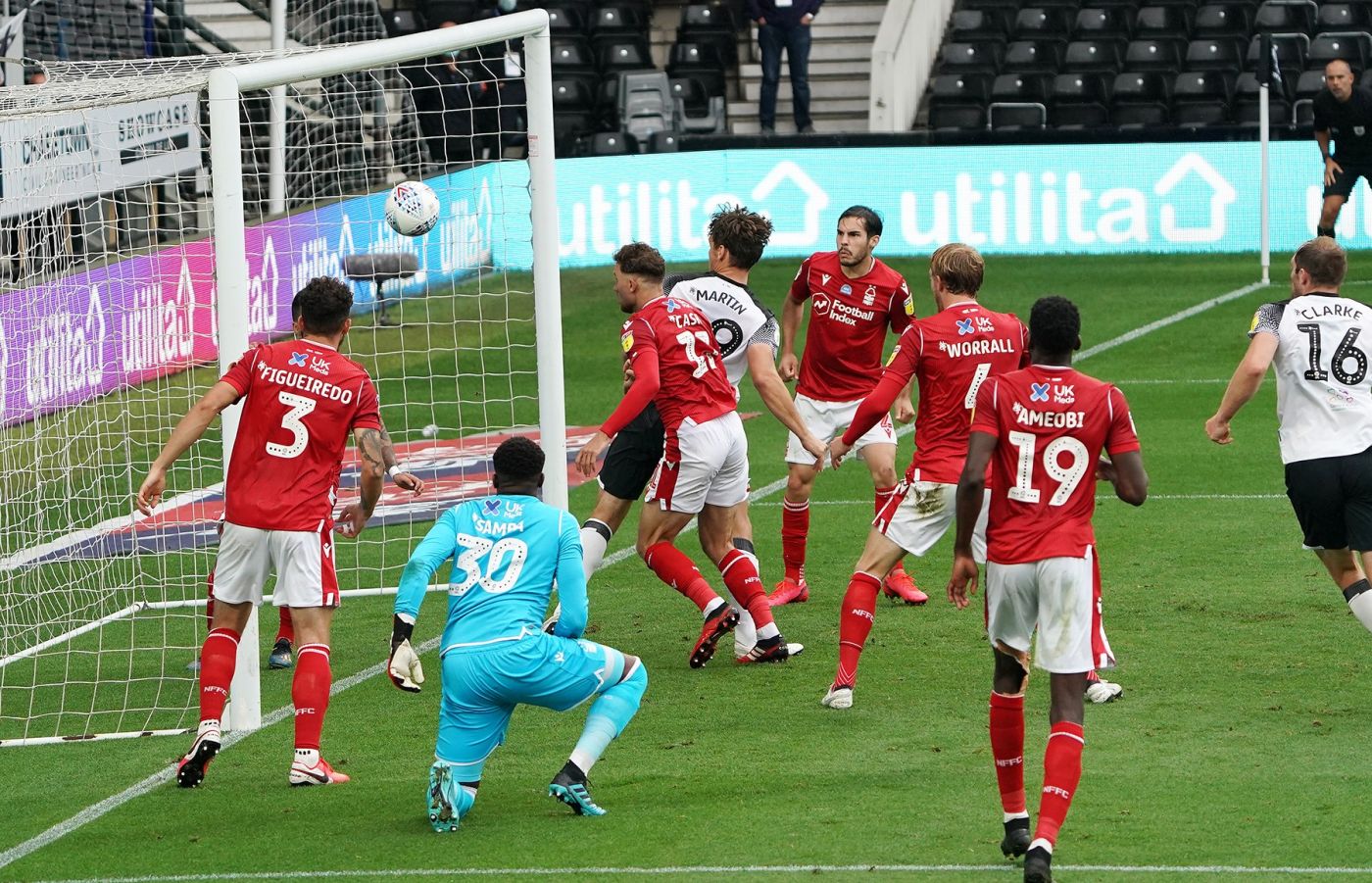 Chris Martin headed home in the final minute of additional time, minutes after Martyn Waghorn had received his marching orders, to ensure the Rams and Forest shared the points at Pride Park Stadium.

Joe Lolley gave the visitors the lead in the opening 10 minutes of the game, scoring from 25 yards past Ben Hamer, however, the Rams left it late to respond.

They were frustrated throughout the game, and the odds were stacked against the Rams in the final minutes as Waghorn was sent off.

But into the final minute, Martin pounced, heading home from close range to secure a valuable point.

It would be the visitors who came out of the blocks quickly, not allowing Derby a chance to play their familiar passing style which we had seen in the recent victories over Millwall, Reading and Preston North End. 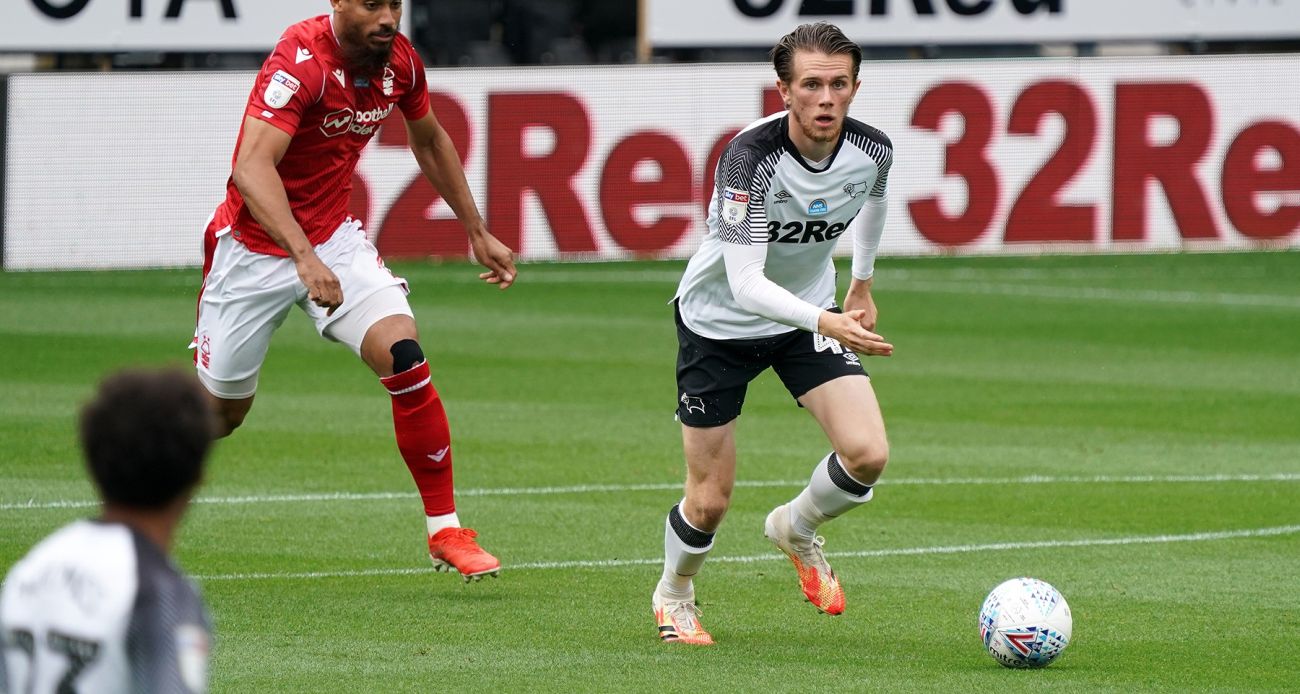 The Forest game plan worked well as Wayne Rooney and Max Bird were not afforded time and space on the ball and they attacked with pace and numbers.

And they punished the Rams on 12 minutes as Lolley was allowed space and time to shoot from 25 yards and he found the bottom corner to open the scoring in the East Midlands Derby.

It was more of a direct approach from the Rams which eventually saw their first half chance of the game. The ball was launched long for Chris Martin who headed down to Louie Sibley but his off-balance effort screwed wide.

Minutes later, a long throw into the box from Duane Holmes caused a scramble in the box but Sibley could not get a clean connection with the ball and the chance passed. 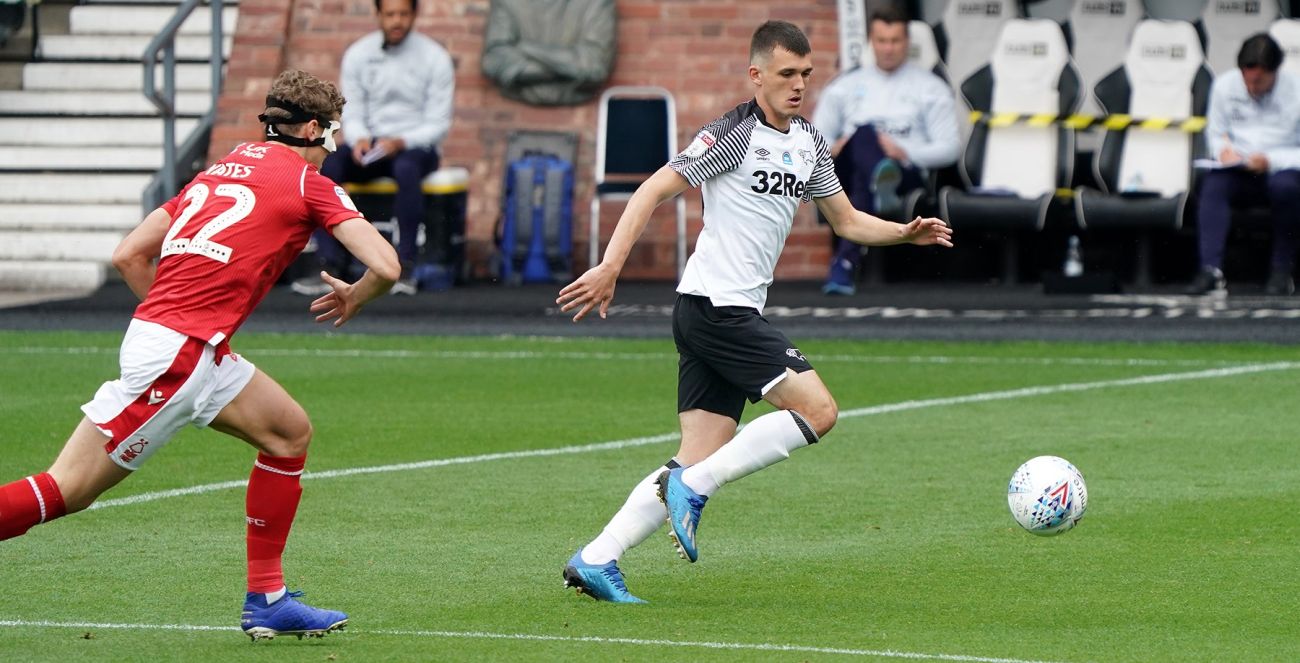 It was a sign that Derby were coming back into the game and they did start to dictate the possession from that moment on with both Rooney and Bird finding pockets of space to work in.

Holmes and Jason Knight switched wings on the half hour mark, and the Rams started to get more joy down the sides.

Bogle picked out Chris Martin’s head from a cross which went over, whilst Forsyth fizzed a cross into the box which Nottingham Forest goalkeeper Brice Samba fumbled in front of him but clear of a Derby man. 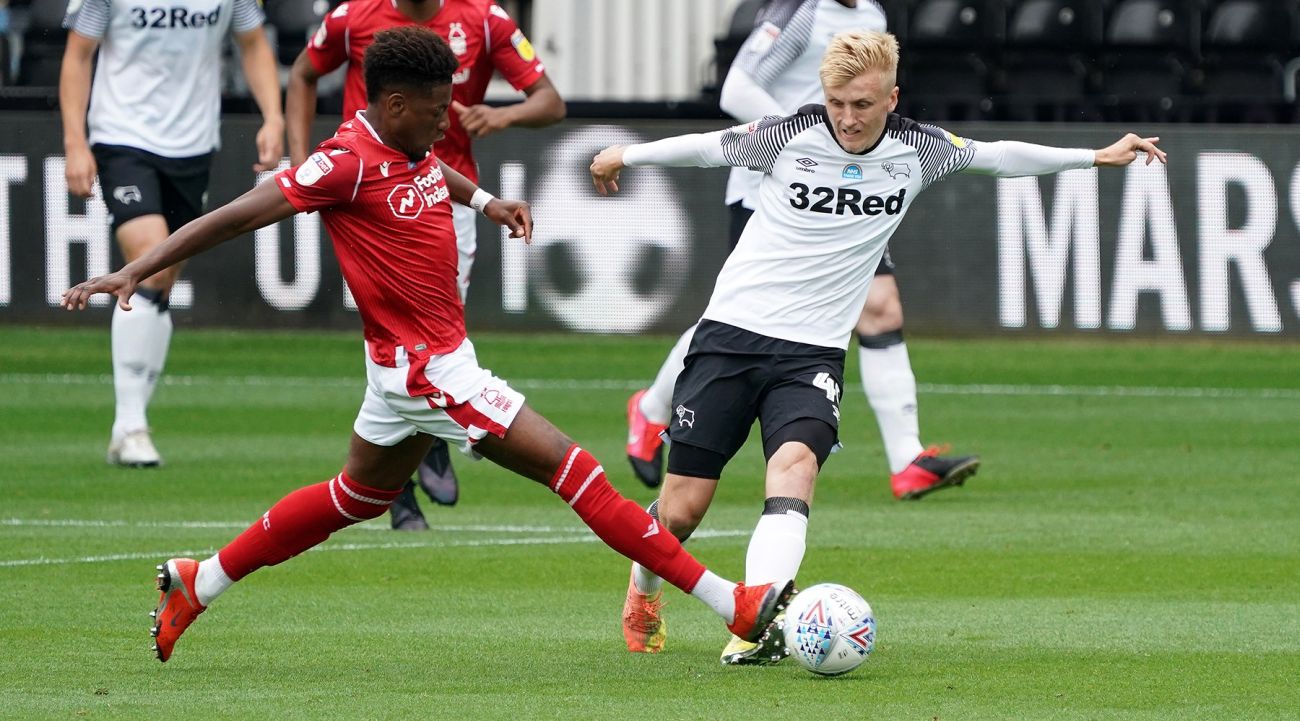 The best moment of the half for Phillip Cocu’s side came just before the break as Sibley managed to roll Joe Worrall on the right and found Bird on the edge of the box.

The midfielder twisted and turned and managed to shoot but his effort was blocked.

Ben Hamer was forced into action in additional time in the first half, punching away a Matthew Cash free kick.

The Rams started the second half with a much higher tempo and almost broke the lines of the Forest defence, but the key pass was just lacking.

That momentum slowed down as Ryan Yates received lengthy treatment in the penalty area which allowed the visitors to regroup.

They used that to their advantage and had a five-minute spell, forcing two saves from goalkeeper Hamer.

First, Ben Watson volleyed goalwards which Hamer had to divert wide, whilst a minute later, Lolley forced a save from the Rams stopper.

Cocu introduced Martyn Waghorn and Florian Jozefzoon into the action as the drinks break was called but it was still the visitors who threatened the Derby goal.

Lewis Grabban fired wide from the edge of the box, whilst substitute Tiago Silva smashed an effort against the post.

The Rams almost punished that missed effort as Forsyth recovered a loose ball in the penalty box and fired across the area. Martin picked up the ball, swivelled and shot but Samba saved.

It was becoming a game of missed opportunities as Grabban fired over the crossbar whilst allowed acres of space in the penalty area. 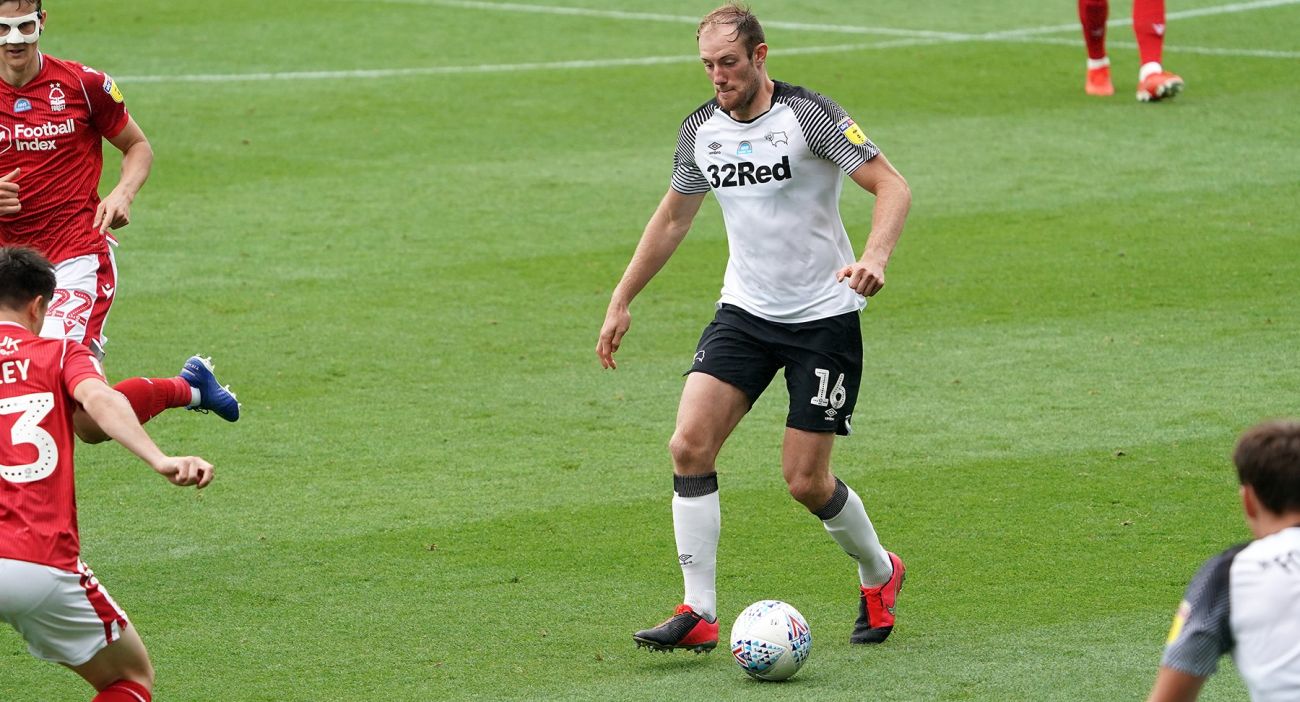 The Rams threw caution to the wind and brought on Graeme Shinnie, Max Lowe and Morgan Whittaker in a bid to get something from the game, but struggled to get hold of possession as they were frustrated in the closing stages by their opponents.

That frustration boiled over as Waghorn received his marching orders in the final minute of the game following a challenge on Ryan Yates.

However, the afternoon was saved by Martin who headed home in the final minute of the game. 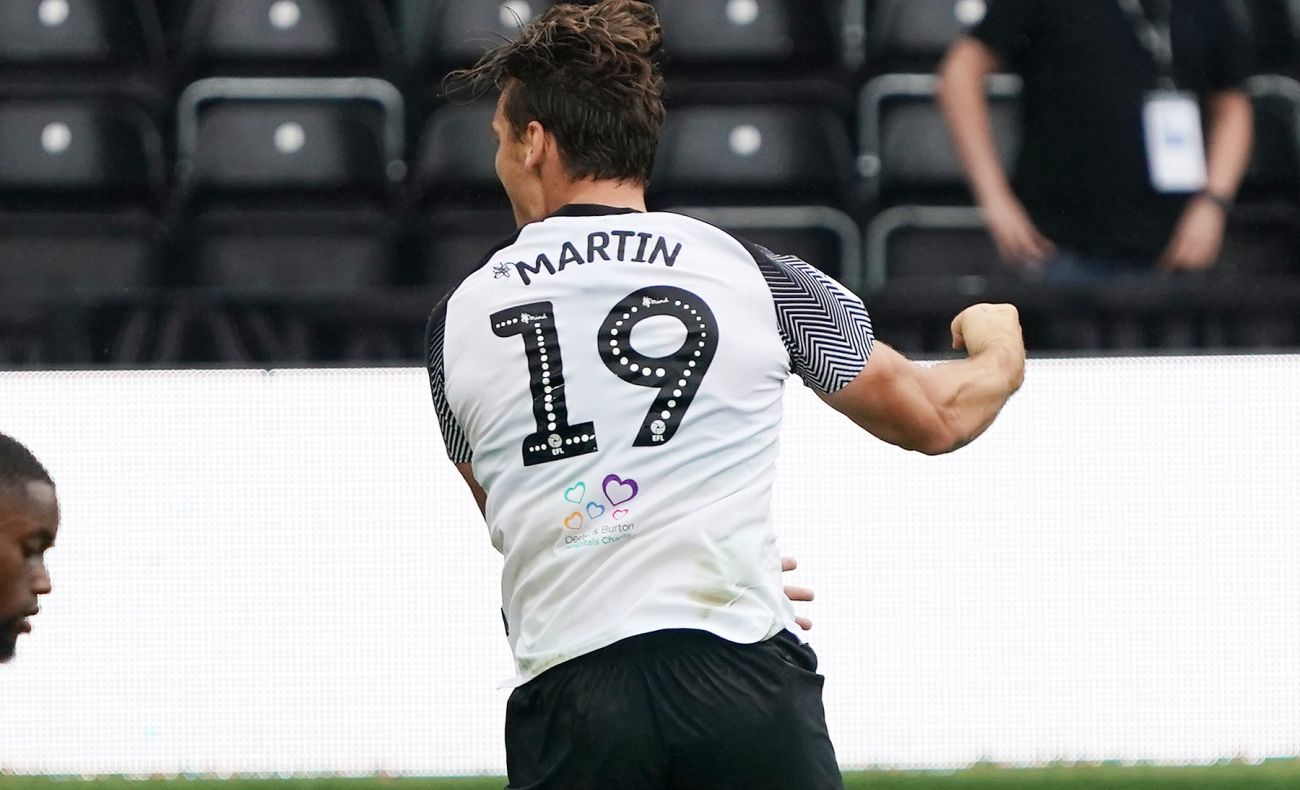 After Rooney's ball into the box, he headed goalwards, the referee checked his watch and gave the goal to rescue a point.