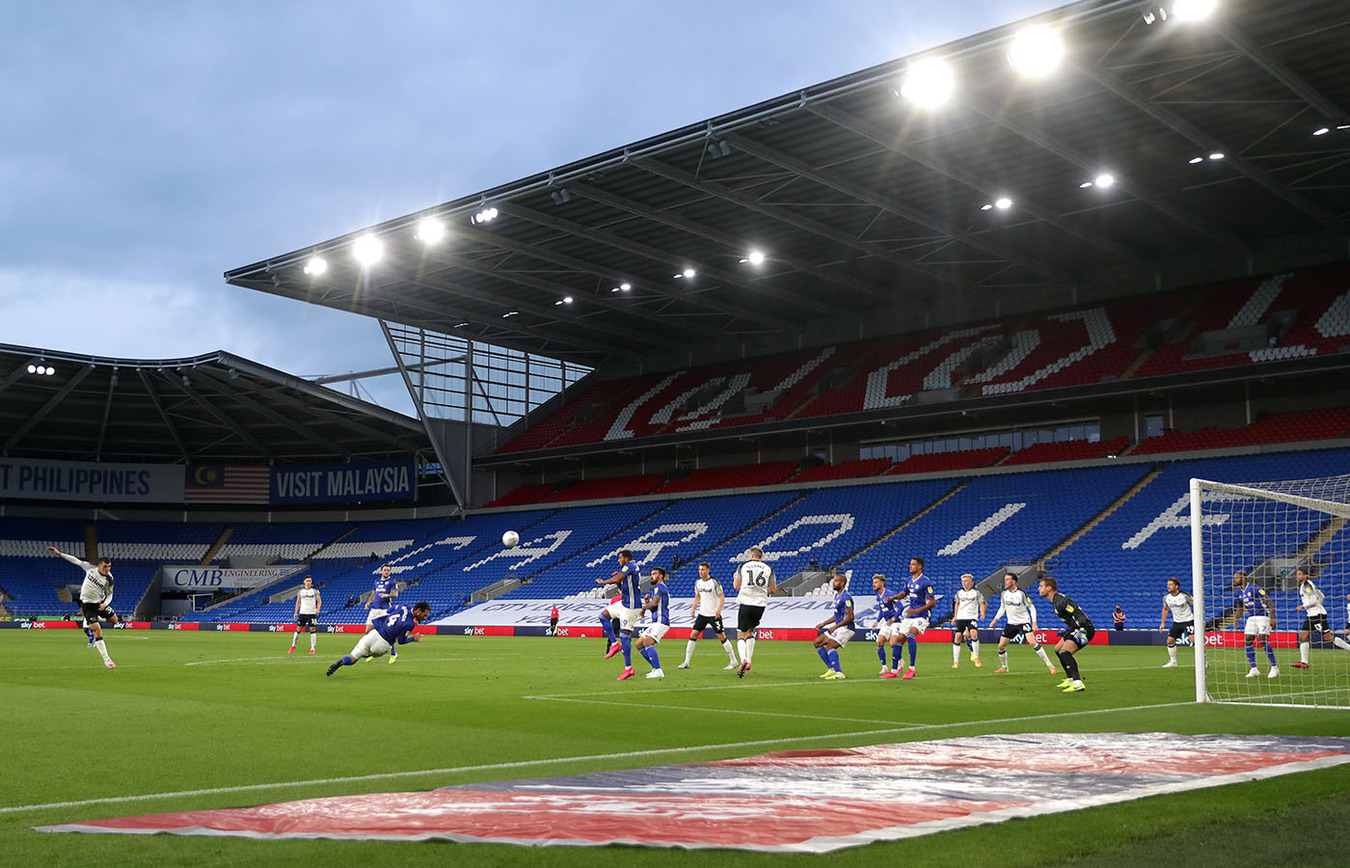 Cocu: “Our Mistakes Cost Us - Not How We Played” Clarke: “It Hurts Us To Fall Short” Cocu Gives His Take On Derby's Loss At Cardiff Rams Lose In The Welsh Capital Cardiff City Vs Derby County: The ONLY Place To Watch Is On RamsTV Tonight Cocu: “There Are Reasons To Be Positive” Knight: “We’re Determined To Get A Good Result” Cocu: "We Have To Be Really Focused" Cardiff City Vs Derby County: Watch From Home On RamsTV The defeat leaves the Rams six points behind the Sky Bet Championship play-off places with only two games remaining.

And it was two errors which cost Derby the game, as Junior Hoilett picked off a loose pass to put Cardiff ahead in the first half.

Jason Knight did manage to find an equaliser after lovely build up play from the Rams, however, on the hour mark, another mistake allowed Lee Tomlin time and space to pick his spot to win the game for the Bluebirds.

Manager Phillip Cocu elected to start Kelle Roos ahead of Ben Hamer, whilst he also brought in Curtis Davies and Craig Forsyth to sure up his defence. 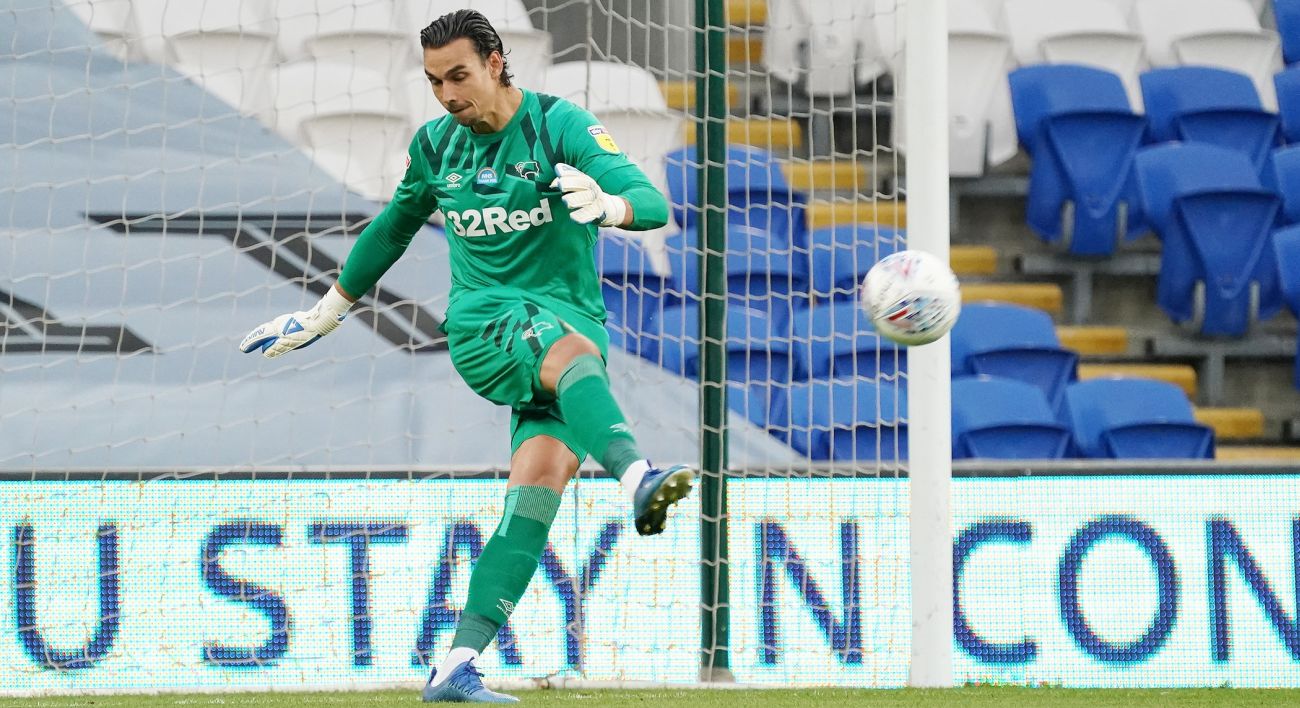 However, a mistake from midfielder Jason Knight allowed Cardiff City to take the lead on 17 minutes.

The young Irishman under-hit his back-pass to Roos which allowed Hoilett the chance to nip in. He rounded the stranded goalkeeper and guided the ball into the open goal to give the home side the early advantage.

It was imperative that the Rams did not give away a second soon after, and they had Roos to thank for the hosts not doubling their lead.

It came from a devastating counter-attack as Hoilett eventually found an unmarked Lee Tomlin in the centre, but Roos was quickly out to the feet of the forward and pulled off a great save. 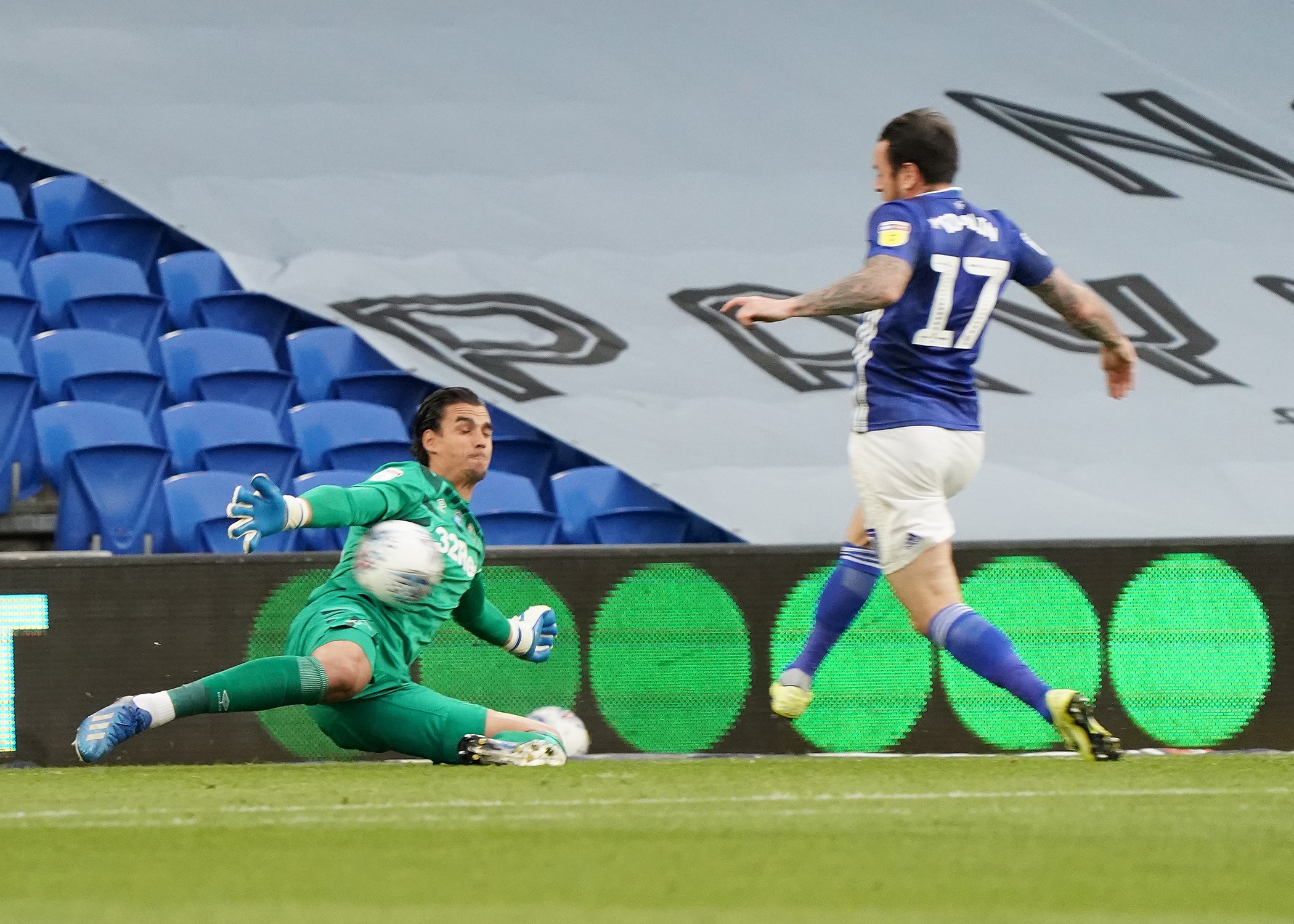 The drinks break came at a crucial time as a visibly frustrated Cocu could be seen handing out instructions to his team.

And that must have influenced the Derby County players as they vastly improved as the half went on, which ultimately led to the equaliser on the half hour mark.

Lovely play from Louie Sibley drew two defenders out and he coolly picked out an unmarked Knight who finished well over Alex Smithies to net his sixth goal of the season and his second goal in as many games.

That goal seemed to settle Derby down and allowed them to play their natural passing game, as they knocked the ball around confidently and waited patiently for an opening.

However, the Rams did have to be wary at the other end. Defender Matt Clarke made a stunning last-ditch tackle to deny Tomlin a clear goalscoring opportunity, whilst Roos was forced to tip wide a Hoilett effort from inside the box.

But on the break, Derby almost made Cardiff pay. A key pass from Sibley found Tom Lawrence rushing through on goal; he had to check back inside and found Chris Martin but the striker was unable to force an effort on target, as the scores were level at the break.

The Rams were quickest out of the blocks in the second half, and Sibley went close on two occasions, stinging the palms of Smithies on both occasions.

Whilst the Rams were on top, an uncharacteristic error from Wayne Rooney allowed Cardiff to regain their lead just before the hour mark.

The Derby skipper was dispossessed by Tomlin and the forward was allowed time and space to pick his spot and regain the lead for the hosts.

The goal seemed to knock the stuffing out of Derby and forced the manager into changes to reenergise his side.

Jayden Bogle, Florian Jozefzoon and Jack Marriott were introduced - the latter making his first appearance since the 3-0 win against Blackburn Rovers before the Coronavirus outbreak halted football. 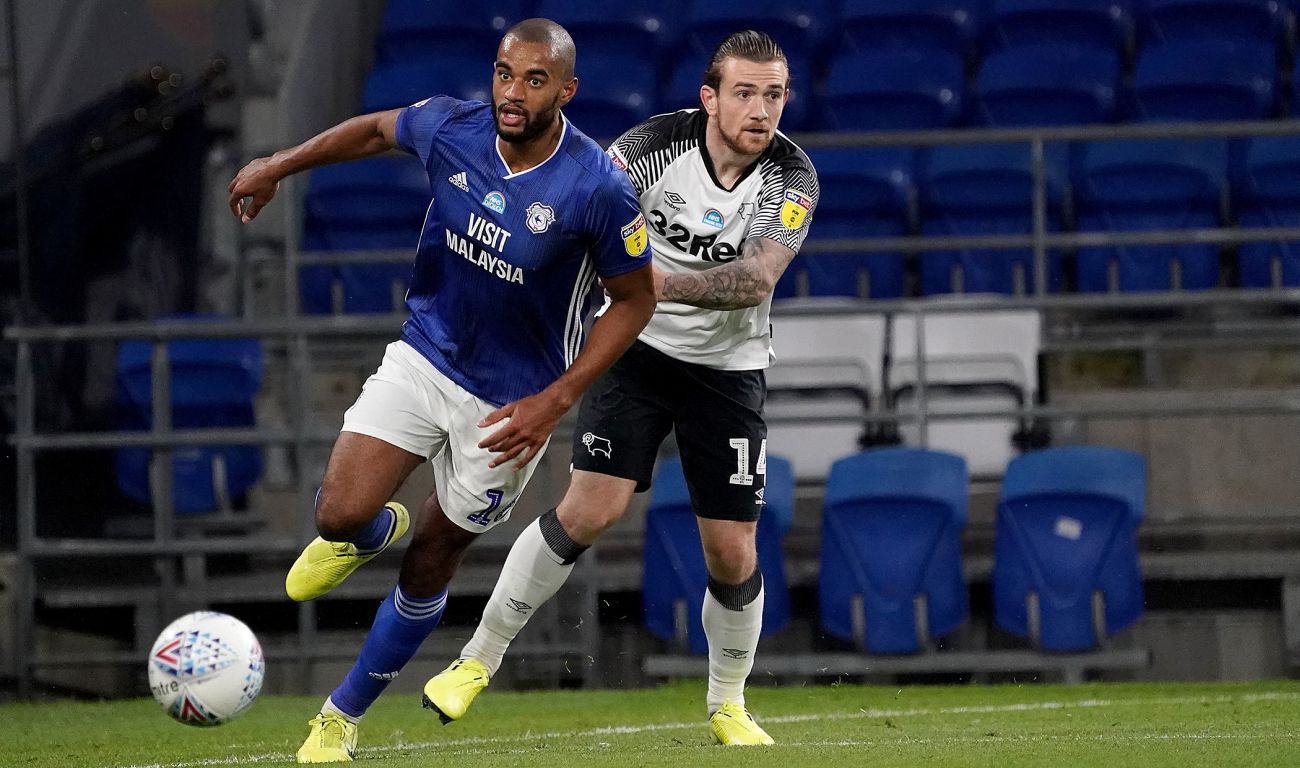 However, the Rams continued to be frustrated by a stubborn Cardiff City side who almost sealed the game with five minutes to go.

Substitute Danny Ward managed to get to the byline and cross for Joe Ralls but his header from close range struck the crossbar.

The closest Derby got to equalising in the final moments was from Marriott as his glancing header went wide of the goal as the Rams fell to a disappointing defeat. 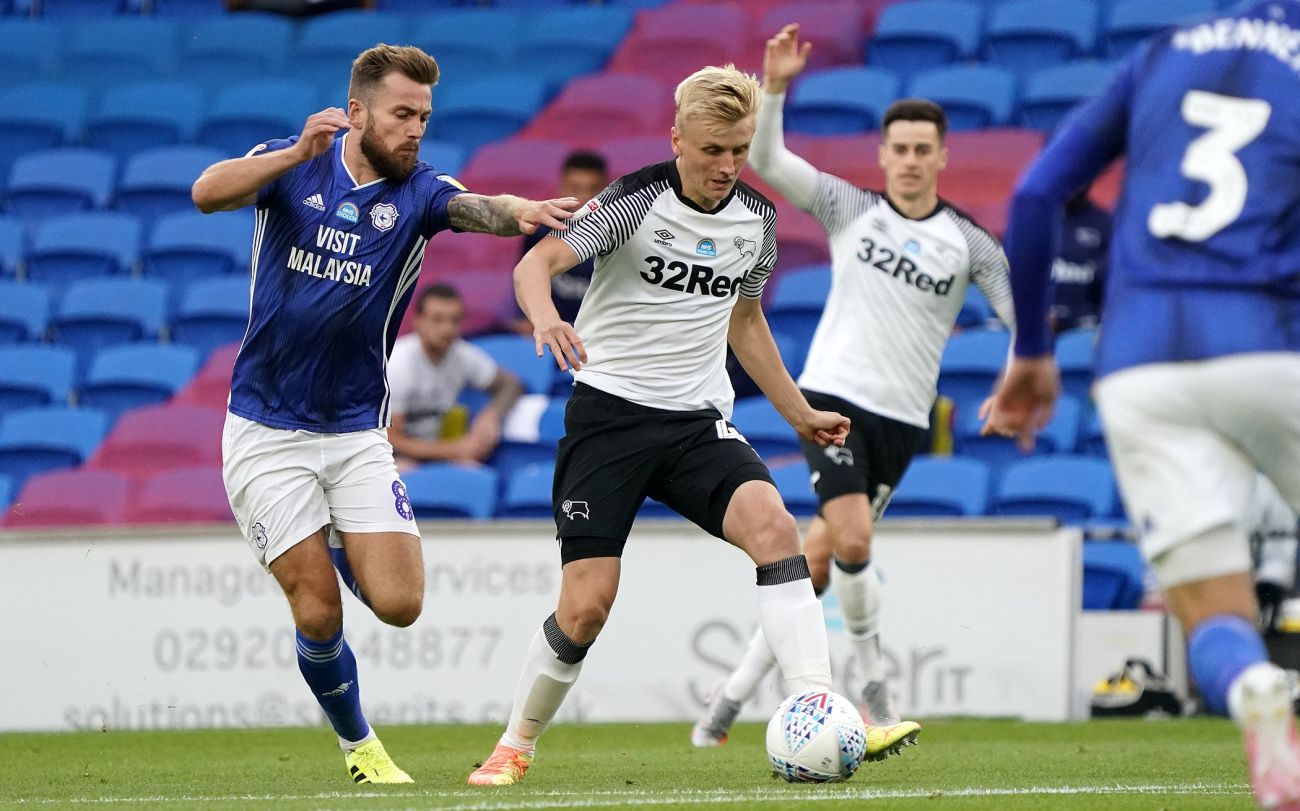