The Rams will be looking to make home advantage count against the Cottagers (kick-off: 7:45pm) and dcfc.co.uk has collated all the information you need ahead of the visit of Slavisa Jokanovic’s men…

Derby County are likely to be without Marcus Olsson when they face Fulham.

The 29-year-old left back was forced off in the first half of Sunday’s 4-1 win over Barnsley with a knee problem.

And whilst there is no timeframe or concrete information on the extent of the injury, it looks as though he will be out of action for this first-leg.

WHAT THE BOSS HAD TO SAY?

Speaking to RamsTV ahead of the Rams’ play-off fixtures, Gary Rowett said: “I would rather go into the play-offs off the back of some positive results than after some disappointment.

“It has no real bearing on the result. It just means you’re going in with a more positive mindset.

“There are times when the team that stumbles into the play-offs without expecting to be there manages to keep rolling with that mindset, and I think that we are that team.

“We are the team that probably felt that we wouldn’t be in the play-offs, but we have produced four very good performances to get there.

“That is where we are, but I don’t think that it will mean anything on Friday night.”

Aleksandar Mitrovic has proven to be a revelation for Fulham since joining on Transfer Deadline Day from Newcastle United.

A powerful, robust frontman, Mitrovic has struck 12 goals in just 17 matches for the Cottagers and played a pivotal role leading the forward line as they narrowly missed out on automatic promotion.

The 23-year-old began his career in his homeland with Serbian giants FK Partizan, making his professional debut with their affiliate club FK Teleoptik.

Despite his tender age, Mitrović was top scorer for Partizan’s first team in 2012/13 as they claimed the title, and his form soon attracted the attention of Belgian outfit Anderlecht, who broke their transfer record to sign him in the summer of 2013.

His debut season in Belgium was a prolific one, as he netted 16 times to help his new employers win the domestic title.

Mitrović was in even better form the following term as he scored 23 goals, prompting Newcastle to part with a reported £13 million for his services.

He quickly endeared himself to the St James’ Park faithful with his wholehearted displays and ended his first season on Tyneside with nine Premier League goals to his name in the Magpies’ ultimately unsuccessful battle against relegation.

Mitrovic hit double figures for club and country last term, and also netted in his first two appearances for Newcastle at the start of this season.

In the summer of 2013 he was awarded his first cap for Serbia, and he currently boasts a record of a goal every three games, netting 11 times in 33 appearances.

HOW DO I SECURE MY SEAT

There will be no price increase on match tickets ahead of Friday evening’s Sky Bet Championship Play-Off Semi-Final First-Leg against Fulham.

The fixture is closing in on a sell-out and the club is calling on supporters to ensure they secure their seat as soon as possible to avoid disappointment.

Tickets are available at the following prices:

* The club has removed booking fees for supporters buying online and choosing to have their tickets sent to them via the [email protected] or Mobile Ticket service. Due to the anticipated high demand the Rams have moved to encourage supporters to purchase their tickets via these methods in order to minimise any inconvenience with queuing. 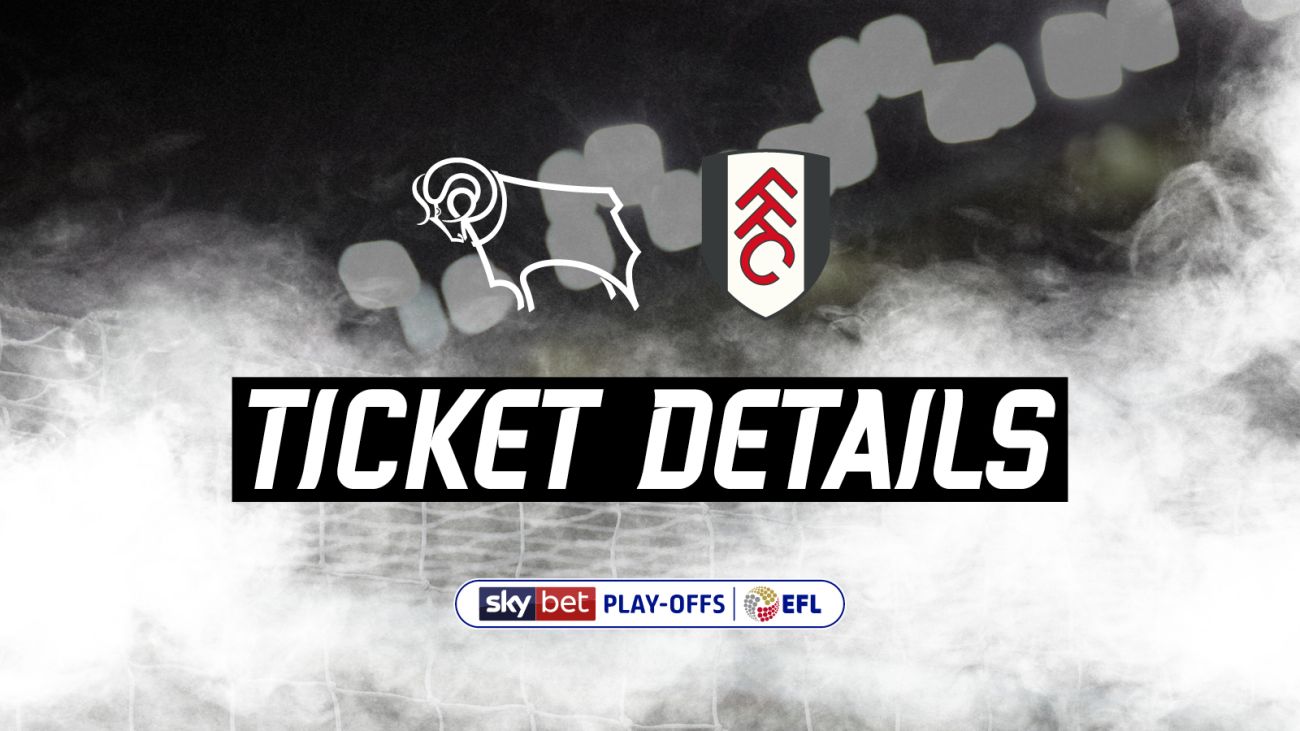 Supporters are being warned that the M1 Southbound will be closed from 10pm – between Junction 23A and 24 – this Friday.

WHAT’S TO COME IN THE RAM

Supporters will be catch an extensive play-off preview from Derby County manager Gary Rowett in our special edition of The Ram on Friday night.

Spanning over six pages, the 44-year-old speaks about fulfilling the season’s first aim, the mentality his side are going to need for their play-off clashes with Fulham, the Cottagers’ qualities, the lessons he has taken from his own play-off experiences and the importance of an ‘electric’ atmosphere at Pride Park Stadium.

Alongside that, the final instalment of our 2017/18 matchday programme is jam-packed, as ever, with that and more exclusive features and content, supporters can purchase a copy of our 76-page official matchday programme for just £3 from all around Pride Park Stadium. 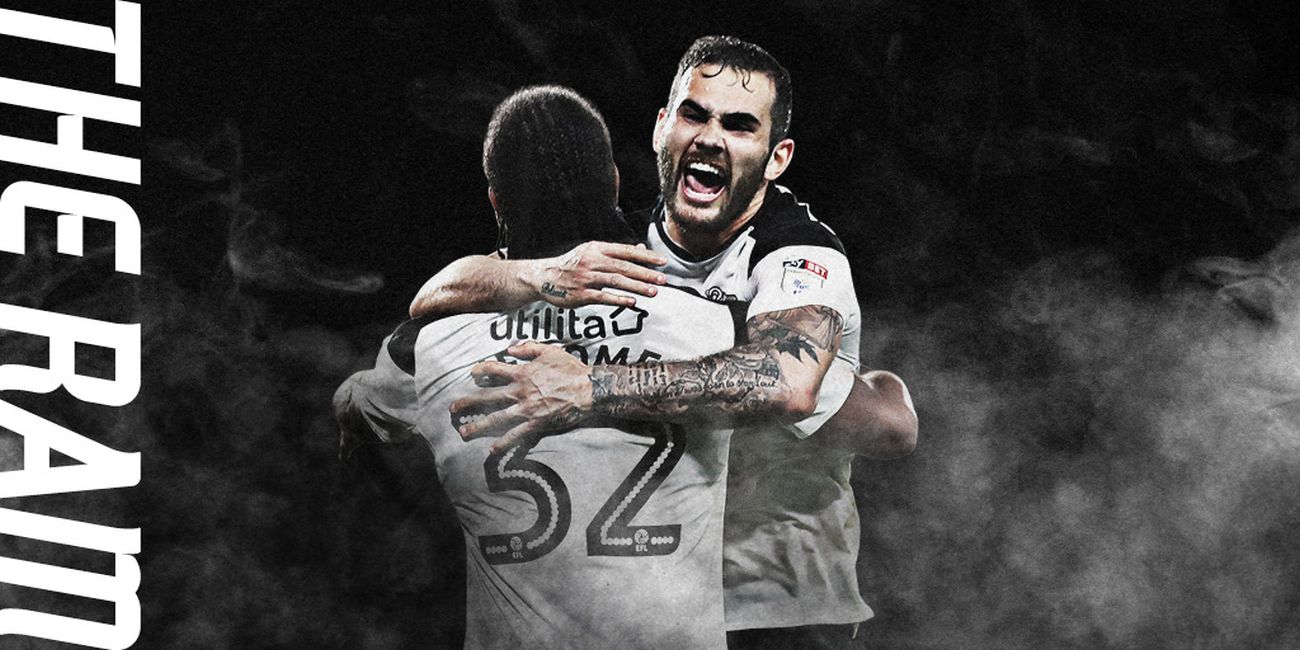 OUR LAST MEETING WITH THE COTTAGERS?

Derby County threatened a late comeback but were ultimately beaten as Fulham won 2-1 at Pride Park Stadium in the Sky Bet Championship back in early March.

First-half goals from Aleksandar Mitrovic and Ryan Sessegnon gave the visitors a healthy advantage at the break.

Tom Huddlestone struck with just over 20 minutes to go as Derby fought back, but they couldn’t find the crucial equaliser.

WHO’S THE MAN IN THE MIDDLE?

Roger East will be the man in the middle when Derby County host Fulham in the Sky Bet Championship Play-Off Semi-Final First-Leg at Pride Park Stadium on Friday, kick-off: 7:45pm.

East has officiated 28 matches this term. The majority have come in the Premier league, though he has also been in action for five Championship fixtures. In total, he has produced 92 yellow cards and three red cards.

This match will be the second involving the Rams that he has taken charge of this campaign after he was the man in the middle for Derby’s 1-1 home draw against Birmingham City.

In total, East has officiated 11 matches involving the Rams during his career, which includes their 2-1 victory against Brighton and Hove Albion in the 2014 play-off semi-final first-leg. Of those games, five victories, four draws and two defeats have been tasted.

East will be assisted by Constantine Hatzidakis and Adrian Holmes on the lines, whilst Kevin Friend has been appointed as the fourth official.

As both fixtures have been selected for live TV coverage and due to international broadcasting rights, RamsTV will only be able to broadcast a live audio stream of the game.