Frank Lampard’s side will look to build momentum as all the focus now is on the 15 remaining league games following the Rams’ exit from the FA Cup. Here, dcfc.co.uk has gathered all the information you will need ahead of the clash with Neil Harris’ side.

Jack Marriott made his return from injury on the weekend for the second-half of the FA Cup meeting with Brighton and Hove Albion.

The game with Millwall could come too soon for Mason Mount who is dealing with a muscle injury. However, there are no new injury concerns for Lampard.

Speaking to RamsTV ahead of the game, Lampard said: “We have had two good runs in the cup but the absolute focus now and the job in hand is the 15 games left.

“Each one of them we have to give everything to try and push up in the top-six and beyond hopefully. It is in our hands and it is good to have that clarity.

“They [Millwall] are difficult opponents no matter which way you look at it. Their performances last year to almost push them into the play-offs and they are a team with a good manager that plays to their strengths which makes it difficult for you to play. It’s going to be a tough game.”

Not secured your ticket yet ahead of Wednesday’s game?

Matchday ticket prices have been confirmed ahead of Derby County’s return to Pride Park Stadium. 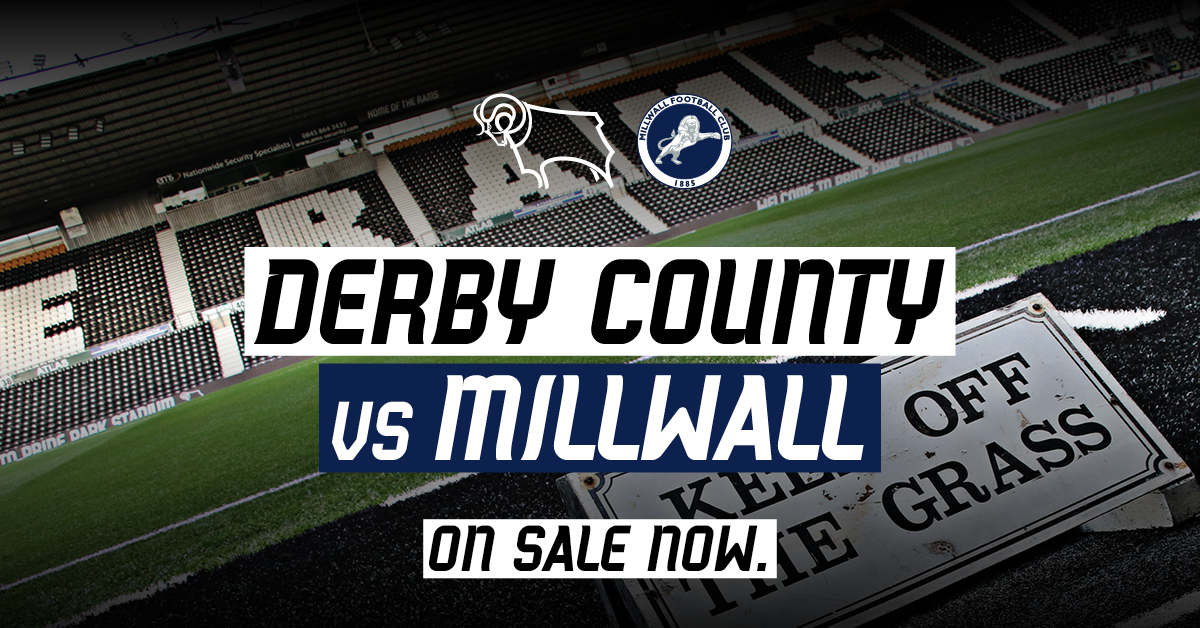 Ticket prices are increased on the day of a game, so pre-purchasing prior to matchdays is recommended.

Tickets on matchday are available for Derby County supporters from:

The Rams sat down with an exclusive interview with Kelle Roos ahead of the clash under the lights at Pride Park Stadium.

Spanning six pages, we spoke to the goalkeeper about always being prepared to take his opportunity between the stick, his loan spells and his recent league debut for the Rams.

The Rams fell two goals behind in the opening 20 minutes to goals from Lee Gregory and Shaun Williams.

Martyn Waghorn found the back of the net, but his goal was ruled offside after breaking through and tucking his effort away.

David Nugent pulled on back for Derby after the break with shot from the edge of the box after a counter-attack. A better second-half performance from the Rams saw them pile on the pressure and look for an equaliser, however they couldn’t find the answer.

James Linington will be the man in the middle on Wednesday evening. He has refereed 24 fixtures this season, producing 81 yellow cards and is yet to show a red.

The clash against Millwall will be the first fixture involving the Rams that Linington has officiated in this term.

Linington will be assisted by Robert Merchant and Steven Meredith on the lines, whilst Robert Jones has ben appointed as the fourth official.

RamsTV is set to broadcast Wednesday night’s Sky Bet Championship clash between Derby County and Millwall LIVE in the UK and across the globe.

Streamed in HD and featuring a multi-camera mix with instant replays, full match commentary, as well as pre-match, full time and half time analysis - RamsTV’s Matchday Live show will present fans who can’t make it to Pride Park Stadium with the very best coverage of the Rams’ clash against the Lions.

Fans based in the UK & Ireland will be able to stream the game LIVE on dcfc.co.uk, and through the official DCFC App, for the one-off payment of just £10 - which is a price set by the EFL. Streaming options can be found here.