Derby County have beat off competition from a host of clubs to secure the services of highly-rated midfielder Graeme Shinnie on a pre-contract agreement.

The 27-year-old has captained Scottish Premiership side Aberdeen for the past two seasons and will become manager Frank Lampard’s first signing of the summer when his contract expires at the end of the current campaign.

Capped six times by Scotland, Shinnie has made over 350 competitive appearances in his career and we take a look back at his time in the game so far…

He made his debut for Inverness a year later at the age of 17 as he came off the bench in a Scottish League Cup clash against Annan Athletic, which his side won 4-0.

Shinnie would go to make his league debut in September 2009 as he played an hour in a 3-2 defeat against Partick Thistle.

A loan spell at Scottish Highland Football League side Forres Mechanics would follow where he would make 11 appearances to gain further first-team experience.

That would be invaluable experience for the Scot who found himself involved in the first-team the following season where he would make 23 appearances in all competitions.

Shinnie was mainly utilised at left-back during his time at Caledonian Stadium and he would net his first goal for the club in August 2011.

He scored a late winner against Kilmarnock to earn three points and drew praise from then-manager Terry Butcher.

Andrew would sign permanently for Inverness, alongside his brother, in the summer of 2011. They would play together for the first time on the opening day of the 2011/12 season as they faced Motherwell.

They played a total of 59 appearances together before Andrew moved south to join Sky Bet Championship side Birmingham City.

The pair have only ever played against each other once. That came in April 2017 as Graeme got the better of his older sibling Andrew as Aberdeen beat Hibernian 3-2 in the Scottish FA Cup.

They could face each other for a second time next season should the Rams stay in the Sky Bet Championship. Andrew plays his football with League One leaders Luton Town, who are on the cusp of gaining promotion, so the rivalry between the brothers could intensify.

Shinnie’s time at Inverness was coming to an end. He was named in the PFA Scotland Team of the Year in the 2013/14 season, whilst in January 2015, it was announced he would join Aberdeen at the end of the campaign.

However, he refused to let that news derail his impressive season with Inverness who were challenging for the Scottish FA Cup.

After victories over St Mirren, Raith Rovers and Partick Thistle, Inverness set up a clash against Scottish giants Celtic in the semi-final at Hampden Park. 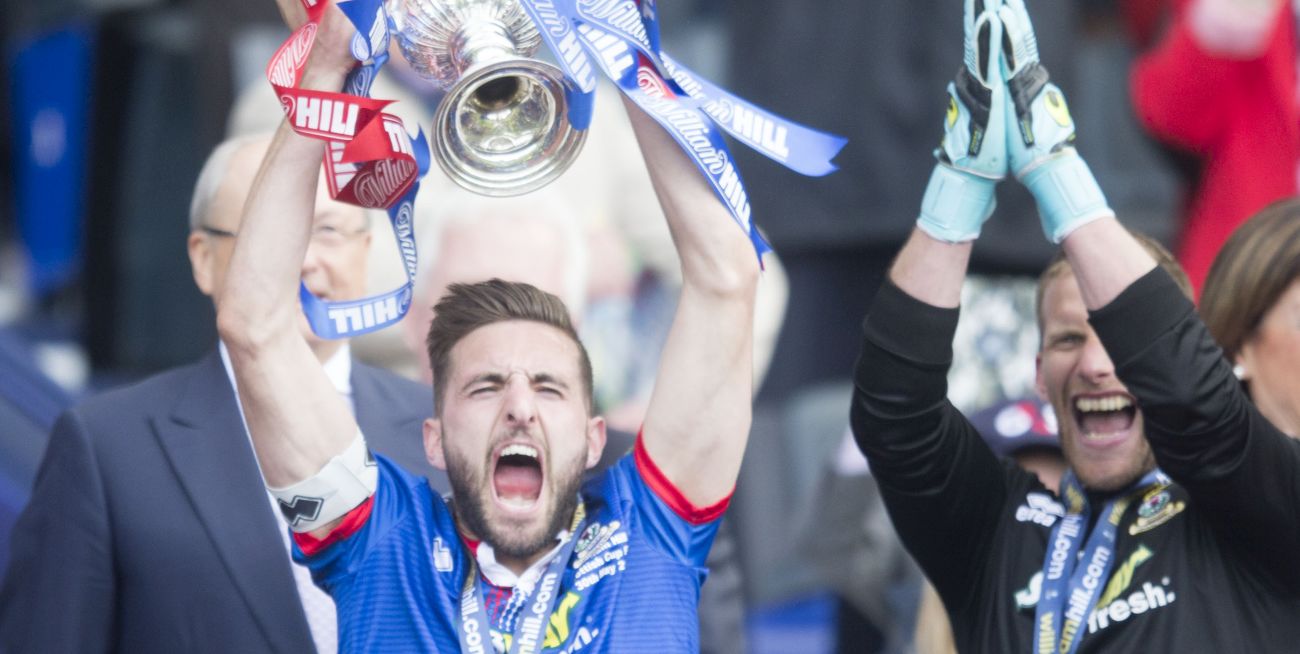 In a team that boasted a host of stars including Liverpool central defender Virgil Van Dijk, Caley Thistle defied all the odds and managed to beat the Scottish champions.

Shinnie captained his side to a 3-2 victory after extra time and it set up a Scottish FA Cup final against Falkirk.

They would reign victorious in the final of the competition as Shinnie played the full game, again at Hampden Park, in the 2-1 victory which saw him lift the trophy and sign off his Inverness career in style.

Overall, he made 180 appearances for Inverness, scoring 11 goals.

Shinnie officially signed for Aberdeen in June 2015 and was immediately utilised in the central midfield slot by manager Derek McInnes.

His first game was a Europa League clash against FK Shkëndija in a 1-1 draw, whilst his first goal for the Dons came in a 2-0 victory over Kilmarnock.

Shinnie helped Aberdeen to back-to-back second-placed finishes before he was announced as their captain in 2017 following Ryan Jack’s move to Rangers.

His first season with the armband ended in another second-placed finish five points ahead of Rangers, but nine points behind Celtic.

The influential figure has averaged 46 appearances over his four seasons at Pittodrie. During his time with the Dons to date, he has netted 11 goals.

Former Scotland manager Alex McLeish called the midfielder up to the national team squad during his first tenure with the country in 2015.

He did not feature in their fixtures against Poland and Gibraltar and had to wait three years to earn his first international cap.

He was again called up by McLeish in May 2018 and made his international bow against Peru.

So far, he has six caps for Scotland but has yet to find the back of the net.