Derby County Under-23s surrendered a two-goal lead and were forced to settle for a point against Arsenal at Pride Park Stadium.

The Rams went ahead just before half time as Chris Martin curled a free kick into the top corner from 20 yards, whilst they extended their lead on the hour mark.

Alex Babos coolly slotted past the goalkeeper from close range to give the Rams the advantage, however, two goals in the space of 10 minutes turned the game around.

Robbie Burton pulled a goal back on 70 minutes, whilst substitute Folarin Balogun capitalised on a mix up at the back to ensure the points were shared at Pride Park. 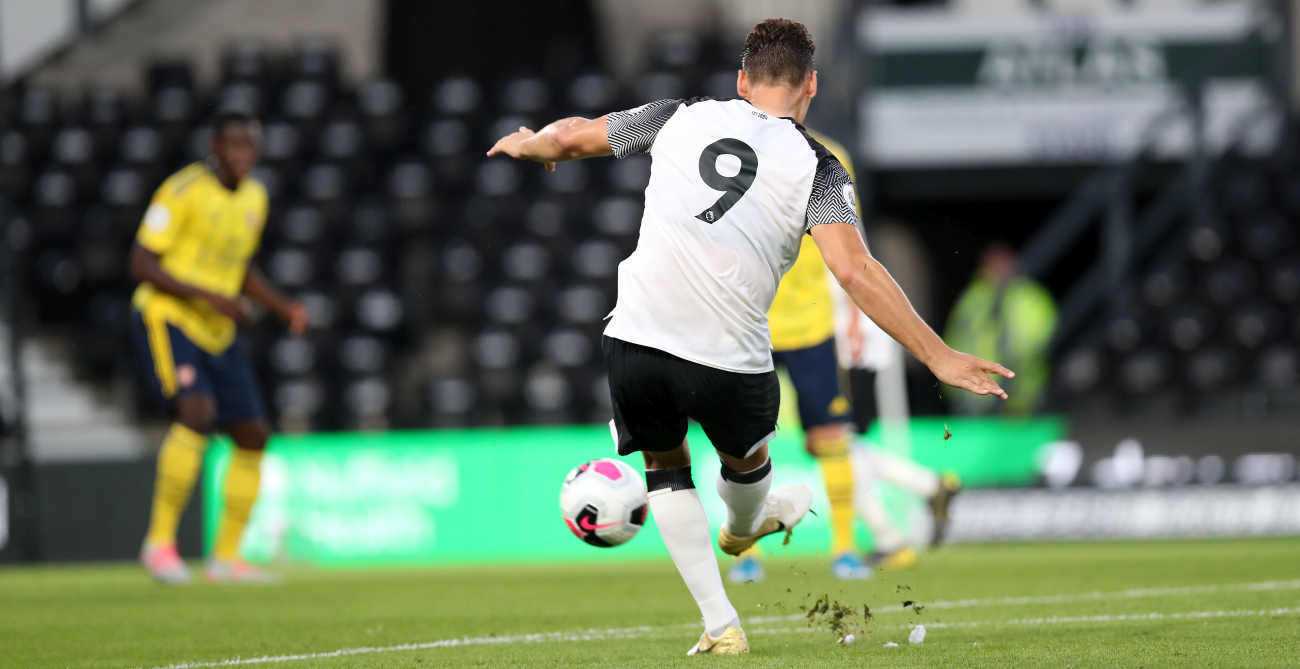 The Rams were organised in the opening exchanges of the game and frustrated their opponents on a number of occasions.

When they did eventually get through, Ethan Wassall and Max Hunt managed to get back to clear the ensuing danger.

The first shot of the game came on 15 minutes as Arsenal midfielder Burton harmlessly curled over from 25 yards.

Derby soaked up a lot of pressure but looked promising on the counter-attack. Midway through the game, Max Bird dispossessed his man and raced at the defence before slipping in Jayden Mitchell-Lawson.

The winger took one touch and shot but his effort slid wide of the far post.

Rams full back Callum Minkley was booked just after the half hour mark, whilst two minutes later, Arsenal forward Emile Smith Rowe had a golden opportunity to put the visitors ahead.

After a well worked move, the ball fell to Smith Rowe six yards out but he could not get the ball out from under his feet. He did manage a shot but Jonathan Mitchell was equal to his effort.

Derby were gifted an opportunity to score a minute before the break. Under no pressure, the ball bounced up onto the hand of Arsenal midfielder Burton and a free kick was awarded 20 yards from goal.

Striker Martin stepped up confidently and curled the ball into the top corner to give the Rams the advantage at the break.

The Rams almost doubled their advantage a minute after the break as Jahmal Hector-Ingram took aim from 25 yards but his effort well the wrong side of the post.

Chances started to follow. Trae Coyle opened his body and shot from distance but the ball fell wide of Mitchell’s goal, whilst a minute later, Babos fired wide.

The forward wouldn’t wait long for another effort as he doubled the Rams’ lead on the hour mark. Max Bird’s sumptuous pass with the outside of his boot found the onrushing Babos who kept his head and found the bottom corner from close range.

That lead would only last 10 minutes, however, as Arsenal pulled a goal back on 70 minutes. A lovely passing move on the edge of the box presented Gunners skipper Burton with a shooting opportunity and he found the bottom corner to put the pressure on the Rams.

Martin almost restored the Rams two-goal lead five minutes later, however, his effort was adjudged not to have crossed the line.

The Rams would rue that missed opportunity as a defensive error allowed Arsenal to equalise as Balogun scored into the empty goal to equalise.

Derby had to withstand a lot of pressure in the final minutes of the game as the Gunners tried to force opportunities, but the Rams held firm and earned a point. 03:18
"We'll Keep Our Heads Up And Look Forward To Saturday"