Derby County fell to a 2-1 defeat at the hands of Watford on Friday evening in the Sky Bet Championship. 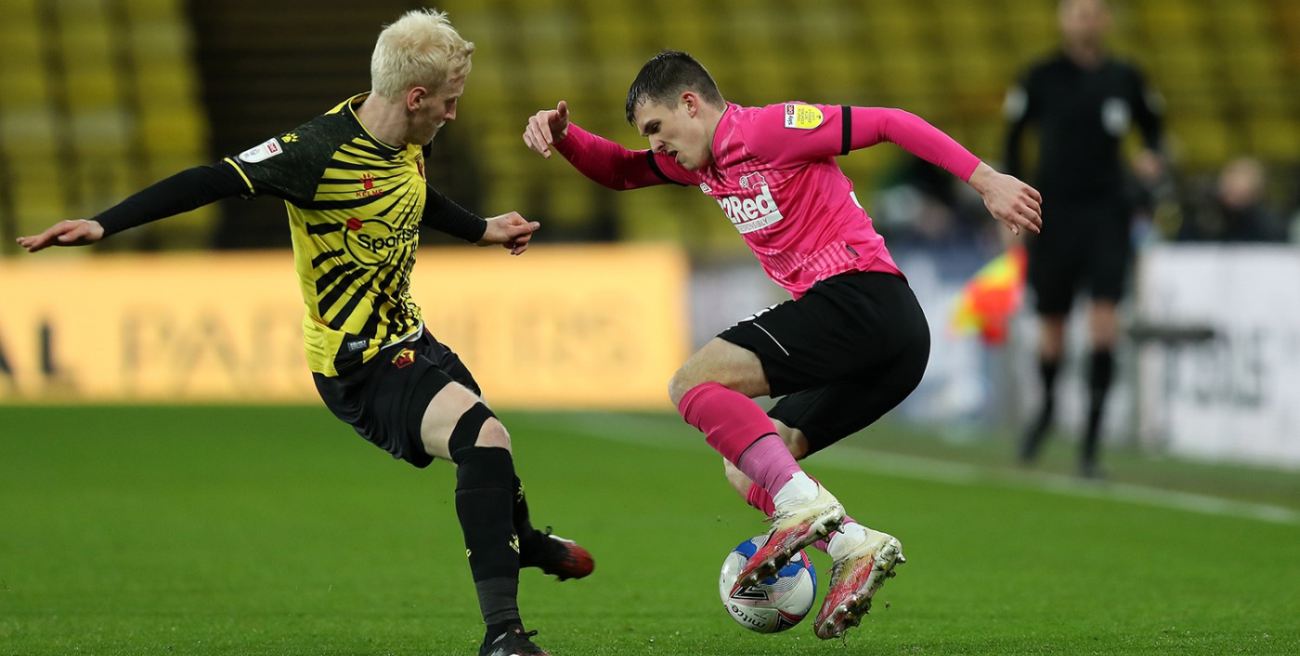 The Rams were unable to repeat the late heroics from the victory over Wycombe Wanderers on Tuesday evening and time ran out before Wayne Rooney’s side could find the equaliser they were pushing for.

Two quick goals within two minutes inside the opening 20 minutes for the hosts, gave Wayne Rooney’s side a battle ahead for the remainder of the game. Ismala Sarr’s rapid pace set up the Bees’ first goal before his pass was ricocheted off the inside of Joao Pedro’s boot.

Will Hughes was on target soon after with a powerful shot across goal in his first meeting with the Rams since leaving the club four years ago.

The Rams pulled one back in the closing stages when Nathan Byrne’s cross was turned in by William Ekong for an own goal. A nervy final ten minutes played out for Watford as Derby pressed to earn a point. Byrne came close with his corner aiming for the near corner, but it was denied by the Bees’ keeper and the Rams were forced to leave Vicarage Road empty handed.

It was clear in the opening 15 minutes that Derby would divert from the direct style they had played in their last two victories to play more football to match Watford. As both teams shared possession, the home side showed their intent to aggressively press, however neither goalkeeper had much to do.

The Bees took the lead in the 18th minute when the Derby goal was tested for the first time. Ismala Sarr broke down the right and played a one-two with Kiko Femenia who fed the ball into the area. Sarr showed his rapid speed to meet it at the post and cut back and Joao Pedro was in the right place for the ball to deflect off the inside of his foot. David Marshall was able to get a palm to it, but the power of the deflection bristled past and into the back of the net.

Taking the momentum from breaking the deadlock, the hosts took just two minutes to double their lead. The Rams failed to clear the corner and a back-heel pass from Nathaniel Chalobah found Hughes who shifted to his left foot and rifled a low effort into the far corner.

The Rams found the back of the net with five minutes left to play in the half when Nathan Byrne’s delivery from a corner was met by Kazim-Richards who headed into an open net. However, the referee whistled claiming a foul was made on goalkeeper Daniel Bachmann.

Derby had a final chance in added time on the first-half. Martyn Waghorn raced through to meet a long-ball by Roberts and he chipped his first-time volley looped over the crossbar.

The hosts had another opportunity inside the opening ten minutes of the second-half, when Hughes dinked a ball over the top for Joao Pedro to run onto, but Marshall read it well and was equal to the close-range effort.

With Derby still looking to find a way back into the game, Kazim-Richards came close to closing the gap just after the hour mark. Byrne’s initial delivery into the area was cleared out, but Lee Buchanan pinged the ball straight back in for the striker to chest down and volley wide of the target.

The goal came with 12 minutes left to play to pull the Rams back into the game in the closing stages. A simple one-two by Byrne and Kamil Jozwiak was played on the right with the full-back sending a dangerous ball in front of the goal and Ekong directed it into his own net.

Derby came so close to the leveller in the 85th minute when Byrne’s delivery from the corner curled in and looked to tuck in just inside the front post. Bachmann dived to palm it out and Louie Sibley couldn’t quite set himself to take aim before the danger for Watford was cleared.

Three consecutive corners came in the final two minutes of injury time but Derby were unable to find the back of the net to earn a point. They will look to quickly bounce back when they host Huddersfield Town at Pride Park Stadium on Tuesday evening.