Central defender Curtis Davies paid tribute to both his team-mates and the club's supporters for their resilience as Derby County beat Stoke City 2-1 to record their first home victory of the 2021/22 Sky Bet Championship season at Pride Park Stadium.

On an emotional and passionate afternoon in the East Midlands, a goal from birthday boy Max Bird and defender Davies, who made his 100th start for the football club, secured the Rams a valuable three points on home turf.

Two goals in quick succession put the Rams in control as they led at the break. It could have been more, too. Ravel Morrison fired wide with the goal at his mercy early in the second half, whilst 10 minutes later, the Potters pulled a goal back through Tom Ince.

Despite some nervy moments late on, the Rams held on to record all three points to the roar of the home supporters.

Twenty-four hours previous, Derby County’s Board of Directors issued a statement on Friday evening confirmed that the club, the ultimate holding company of the group, and all of the subsidiary companies have filed notices of intention to appoint administrators.

Davies, who signed a new one-year contract ahead of the start of the new campaign, admitted it has been a difficult time but knows there is plenty of fight in the dressing room.

“I think us as a group of players, all season, have played with an air of expectation that something will happen to us regarding all the various charges held over the club,” he told RamsTV.

“Did we see administration coming and the immediate points? No. Especially overnight on a Friday before a game. We didn’t see it coming, but all season we have been working on concentrating on the football and on what we can do.

“We can’t help what goes on with the club but we can do ourselves proud individually and collectively. We are together, we are fighting for each other.

“It might not be enough but we are all together and fighting to make sure that this club is held in high esteem by the ones in football that knows what goes on.

“We can’t get more players in, but we can play football out there and make the club proud in that way. I’m glad today that it didn’t affect anybody mentally. It was a good performance. It’s the first time we’ve scored two goals in a league match this season and it could have been four goals.

“It turned from a rampant performance at one point to a battling performance in that last 20 minutes, so it’s credit to the lads in the dressing room. Credit to the fans for supporting us all the way through too and if anybody questions anything about this football club, they know that the players are committed and we are giving our all to make this club proud and we wear this shirt with pride.”

As a result of going into administration, the club faces a 12-point deduction. Once the EFL has received formal notification of the application, the deduction will be applied.

That would place Derby at the foot of the Sky Bet Championship table but Davies does not want to dwell on that and is keen to concentrate on the club’s own form.

“We can only control going out on the pitch week in week out, playing football in a brand that suits the club and we want to get results.

“If those results are in vain by the end of the season then we are where we are but we are not going to throw in the towel or wave the white flag, that’s not in my make-up and I won’t let it happen in that changing room.

“For us, it’s business as usual, we do what we do and the people I feel sorry for are the people around the football club. I said that when we barely stayed up at the end of last season that it was the worry, and unfortunately the realisation is now that it is reality. My thoughts are with those people.” 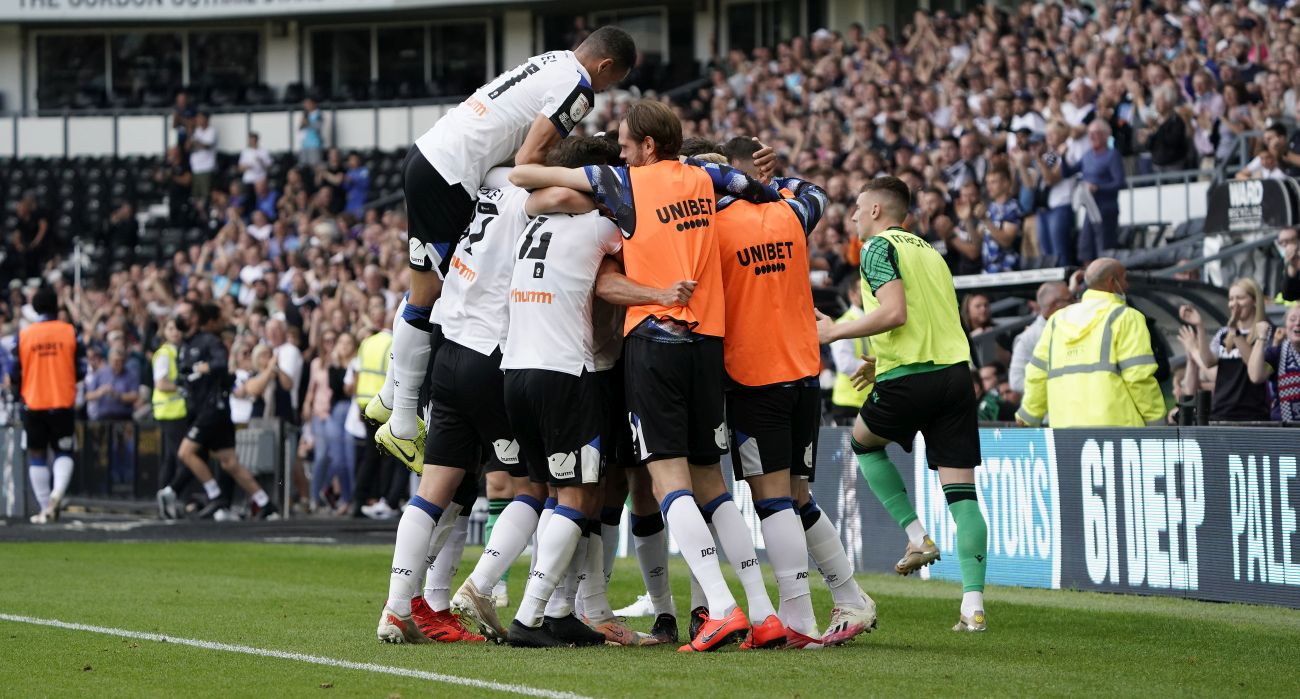 But, despite a tough 24 hours, the Rams put in a strong performance to come away with three points.

A 25-yard effort from Bird, on his weaker right foot on his 21st birthday, followed by Davies’ first goal in four years, secured the Rams all three points and the defender was delighted with his goal.

“I didn’t know what was more surprising, that Birdy put one in the top corner with his right foot from 25 yards, I was in shock from that, but the next one the ball came to me, I headed it and I was in shock that I didn’t realise it was the goalkeeper that came out to punch it,” he explained.

“I thought it was the defender and as soon as it went in, this time it’s mine. I only ever seem to score every four years when I have a baby girl, so Mrs Davies will be on high alert tonight I think!

“My last goal was against Hull City in 2017. My middle daughter was born two days after that and my youngest daughter is eight weeks old today, so I finally managed to get her a goal this afternoon.”