A goal in each half consigned Derby County Under-23s to a 2-0 defeat against Leeds United at the York Community Stadium. 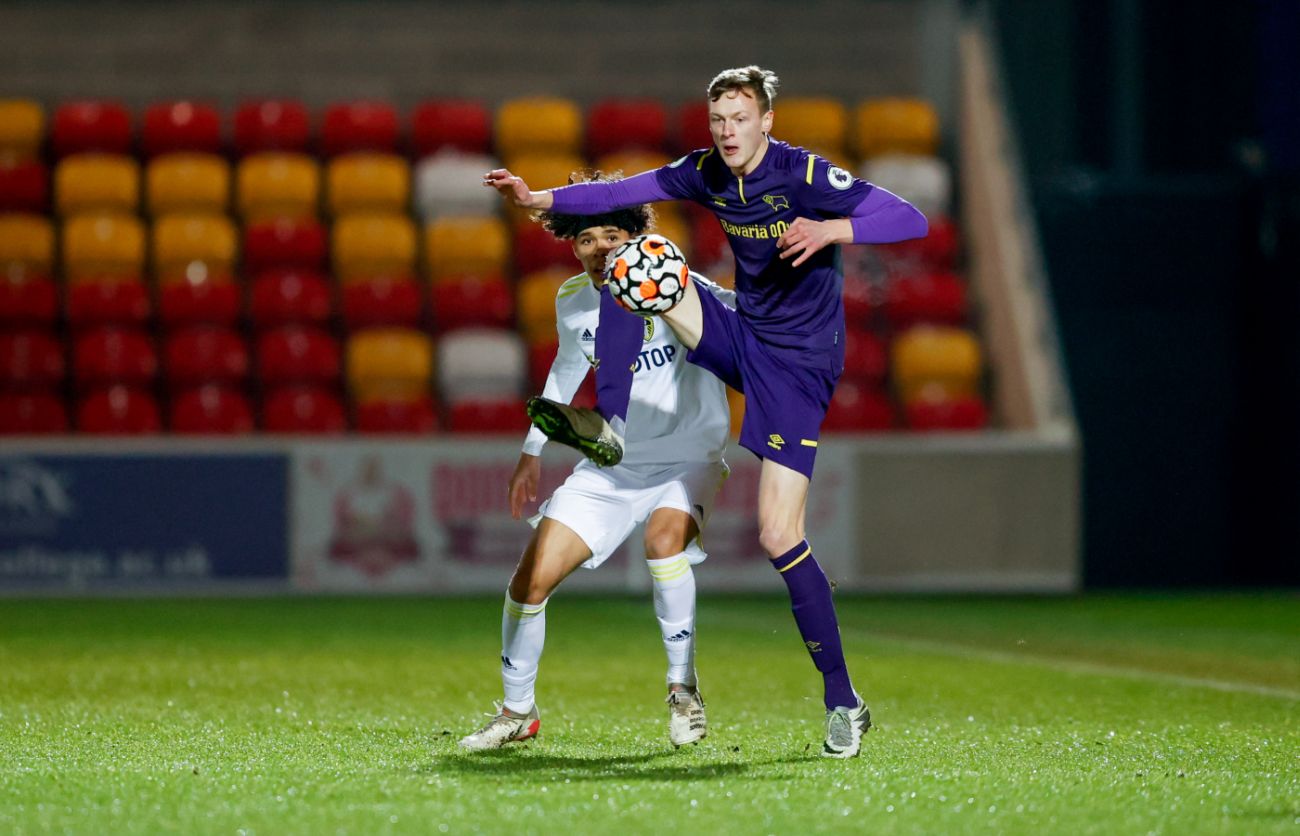 Amari Miller put Leeds United on the half hour mark with a lovely finish into the top corner, leaving Harrison Foulkes with no chance, whilst they settled the game with eight minutes remaining.

Charlie Allen was in the right place at the right time to convert the Whites’ second of the evening as Derby’s Under-23s fell to consecutive defeats in Premier League 2 Division 1.

Pat Lyons had Lee Buchanan to call upon as he was building his minutes ahead of this weekend’s East Midlands Derby clash against Nottingham Forest.

But it was Leeds who almost opened the scoring on nine minutes as full back Liam McCarron dragged an effort wide from inside the penalty area.

The hosts were forced into a change early on as Stuart McKinstry suffered an injury and that lengthy stoppage upset the rhythm of the game slightly.

When play did resume, the Rams went close from a set piece as the ball broke for Louie Watson but his goalbound effort was blocked.

Minutes later, Isaac Hutchinson outmuscled his man on the right and crossed low into the centre but Bartosz Cybulski just couldn’t apply the finish.

And the Rams were made to rue that missed effort as Leeds took the lead on the half hour mark. The ball was only partially cleared by Derby and it sat nicely for Miller who converted into the top corner to put the home side ahead.

The Rams needed a reaction but almost fell two goals behind straight from the kick off as Max Dean fired from 25 yards but his effort was well saved by Harrison Foulkes.

Derby rallied towards the end of the half and created a few chances. Buchanan’s back post cross just evaded the onrushing Max Bardell, whilst Osazee Aghatise stung the palms of the Leeds United goalkeeper who needed two attempts to save his effort.

Leeds made a double change and used all the substitutions at half time, but it was Derby who should have been level on 50 minutes.

Skipper for the night, Kornell McDonald, broke down the right-hand side and played a low ball across the centre. He found Watson unmarked but the midfielder lifted his effort over the crossbar.

Minutes later, Darren Robinson found himself free in the penalty area from a corner but his header went wide of the post as the Rams went in search of the equalising goal.

Buchanan’s comeback from injury lasted 64 minutes as he was replaced by defender Harrison Solomon.

But, with the Rams knowing the needed to find a way back into the game, they committed more men forward, but left themselves slightly exposed at the back.

Leeds almost capitalised on that soon with just under 20 minutes remaining as Allen struck the crossbar. A strong run from Harvey Sutcliffe found the forward who could not convert when clean through on goal and from the follow up, Sean McGurk fired over.

But Allen did get his goal and Leeds’ second of the game on 83 minutes. Miller’s wayward shot bounced nicely for the forward in the penalty area and he converted from close range to consign the Rams to defeat.