Derby County fell to their first defeat of the 2022/23 campaign as they were beaten 1-0 by Charlton Athletic at The Valley. 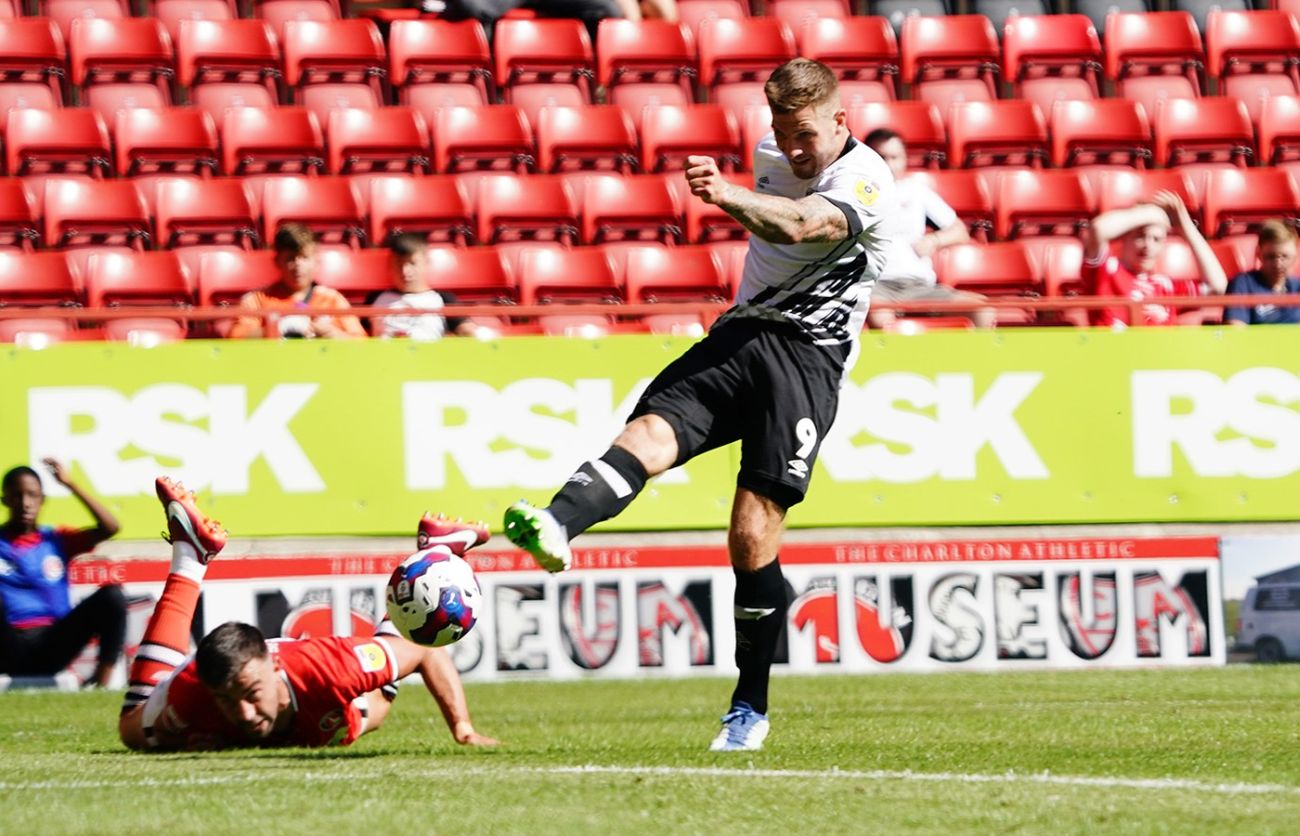 The Rams will wonder how they came away from the capital without any points as they dominated the opening 45 minutes but could not make the breakthrough.

James Collins, Nathaniel Mendez-Laing and Korey Smith went close with early efforts, whilst in the final minute of the first half, Collins struck the post with a fierce volley as it was goalless at the break.

But Charlton upped the tempo in the second half and took their chance when it was presented to them.

Albie Morgan forced goalkeeper Joe Wildsmith into a save, but he could only parry to Corey Blackett-Taylor who made no mistake from close range, firing into an empty goal.

Derby had a golden opportunity to get back into the game as Max Bird’s pinpoint cross found the head of an unmarked Jason Knight six yards from goal but the Irishman headed wide as the Rams suffered their first defeat of the campaign. 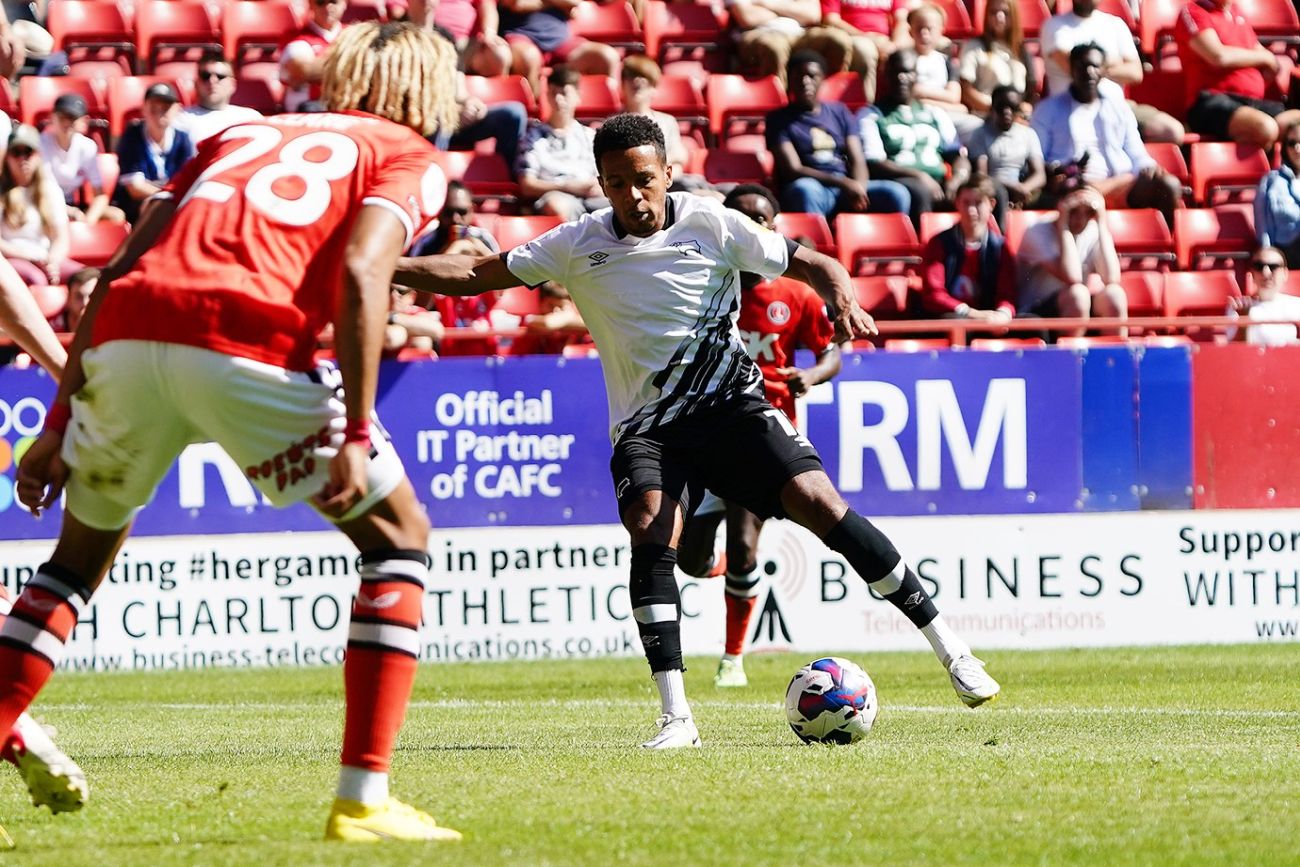 The opening 45 minutes was arguably one of the best the Rams have produced in recent years, however, the only thing missing was the elusive goal.

They were totally dominant, as they pressed high and played with good energy, threatening from the first whistle.

James Collins was a constant threat, not just from the chances created, but the areas he found himself in. He knew when to drop short to collect the ball and bring others into play, whilst he was always in the right areas when a chance presented itself. 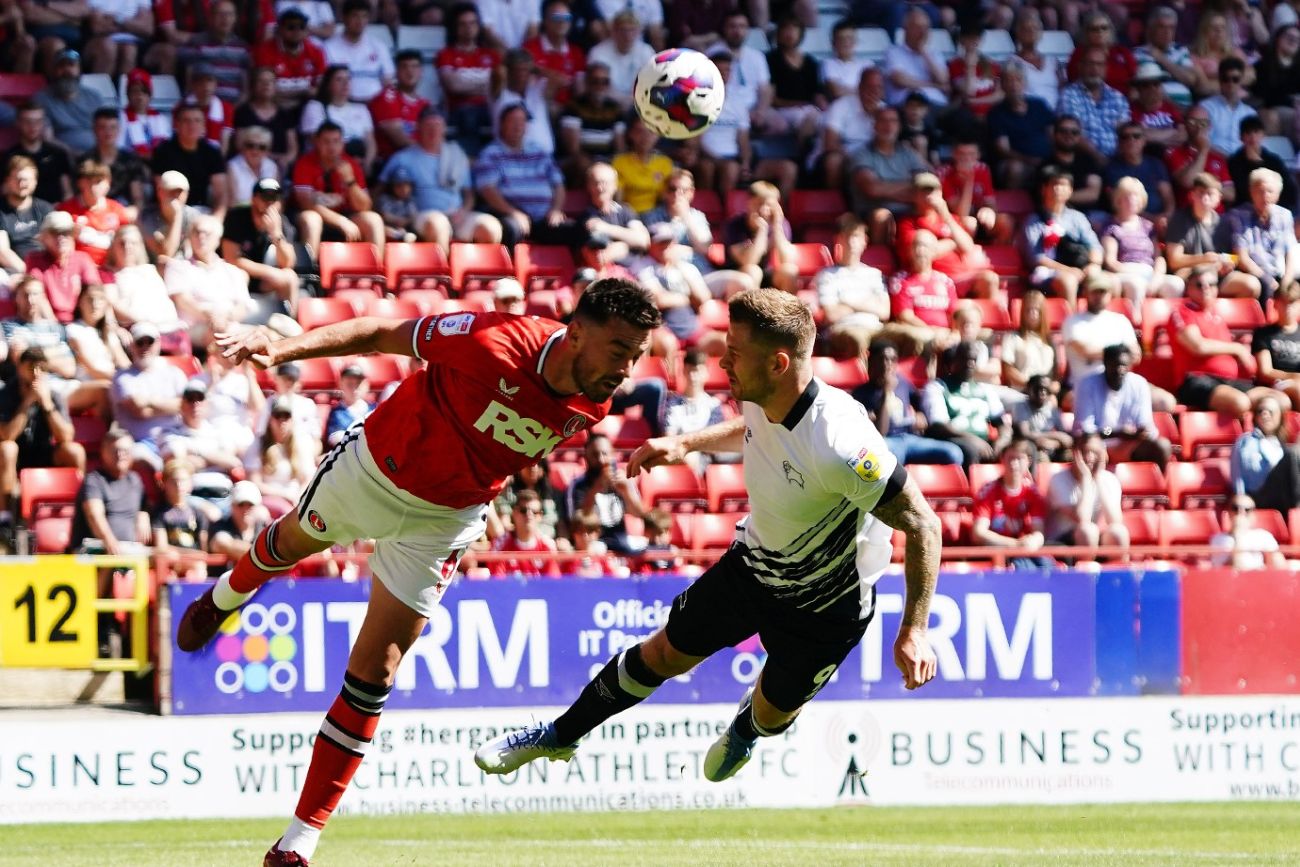 He was unlucky not to open the scoring on nine minutes after receiving a pass from Tom Barkhuizen, but a good save from Joe Wollacott denied him his first goal for the Rams, whilst in the dying seconds of the half, he forced an error from Charlton defender Eoghan O’Connell but fired against the post.

Barkhuizen and Nathaniel Mendez-Laing proved to be good out-balls for the Rams during the opening 45 minutes as they provided the width to exploit the Charlton defence. 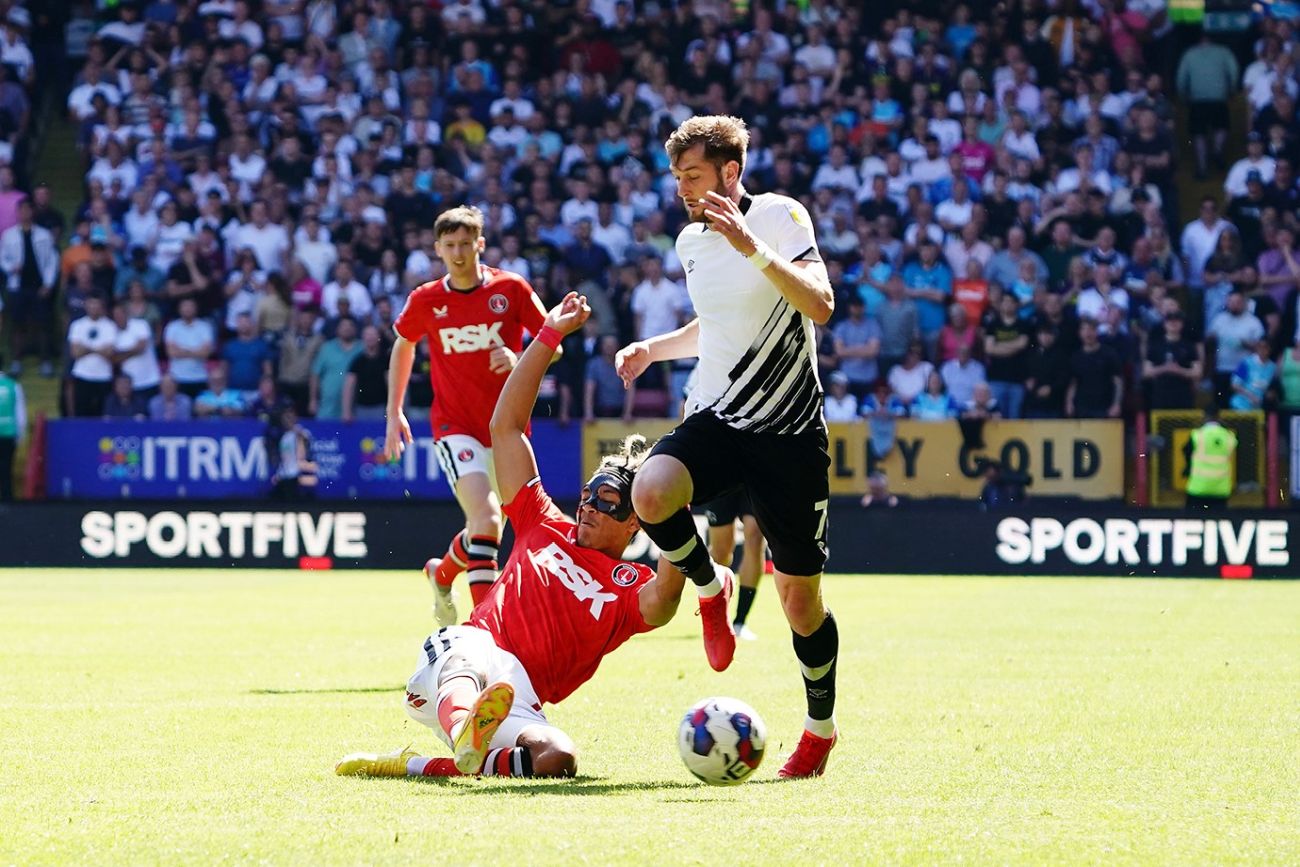 Mendez-Laing again was a bright spark on the right-hand side with his good feet and silky play, and almost opening his league goalscoring account with the Rams his improvised effort from close range was also well saved by Wollacott on ten minutes.

Concentration was always going to be important for the defence, who had little to do during the opening 20 minutes especially. But when a rare corner provided problems in the Derby box, skipper Curtis Davies was aware enough to snuff that danger, heading away from Ryan Inniss who had stolen a march in the area.

Goalkeeper Joe Wildsmith also had to be alert as he pulled off a remarkable save prior to the half time interval as Charlie Kirk’s cross found the head of Jayden Stockley but Wildsmith stood tall to beat away his headed effort. He did the same at the start of the second half as again he denied the forward’s header from close range. 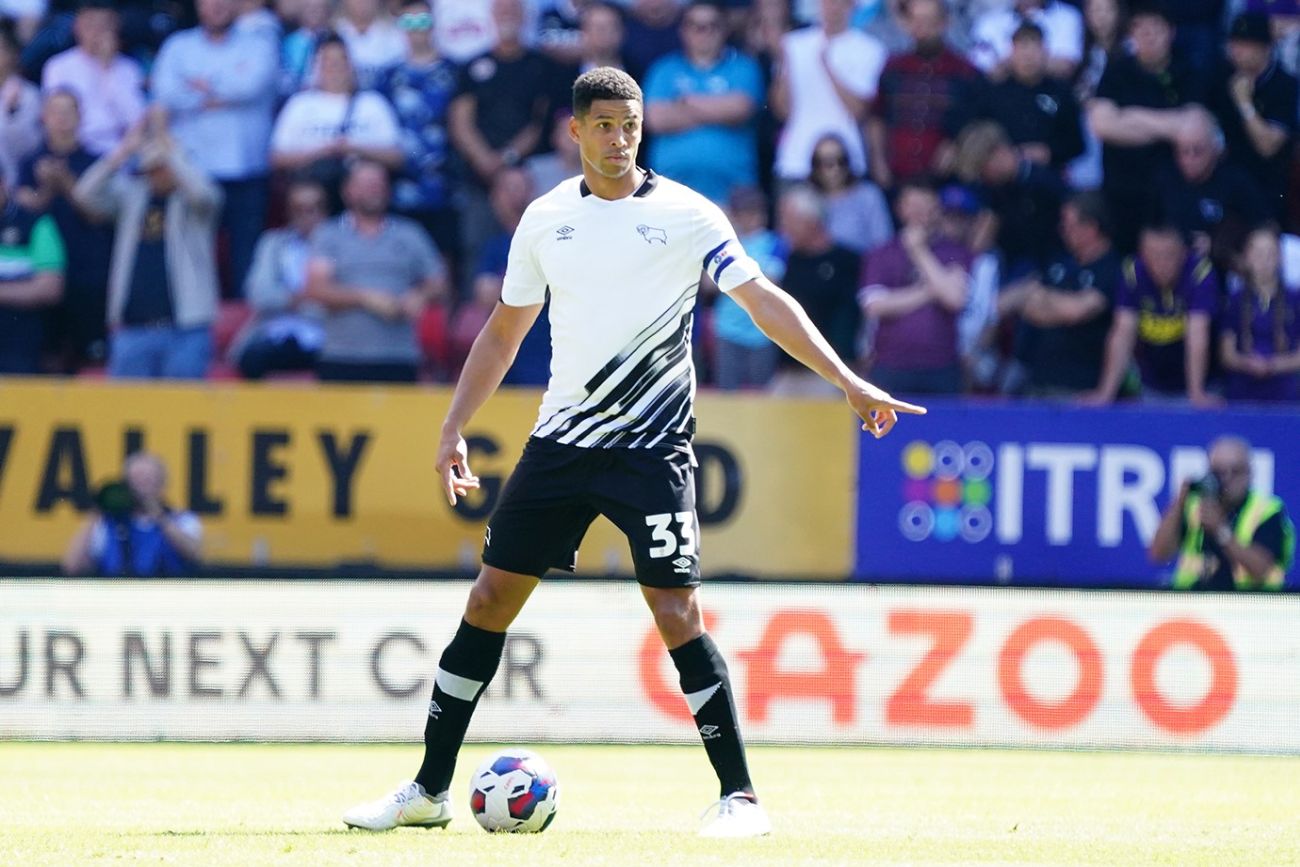 Louie Sibley’s introduction once again proved a bright spark for the Rams who fell behind just after the hour mark as Corey Blackett-Taylor fired the home side into the lead. The midfielder wasn’t afraid of getting on the ball, took it forward and looked to find inroads past the defence.

Lewis Dobbin did the same when he was introduced with 20 minutes of the game remaining. He showed neat touches and supporters got a glimpse of his electric speed, but it unfortunately wasn’t enough to get Derby back into the game as they were beaten by Charlton Athletic.

It’s hard to ignore the game’s major moment. Despite the Rams dominating the first half especially, Charlton came out a different side in the second half and showed their ruthlessness in front of goal on the hour mark.

The goal came from a Derby County corner. They managed to clear and break away, with Albie Morgan racing at the Rams’ defence. 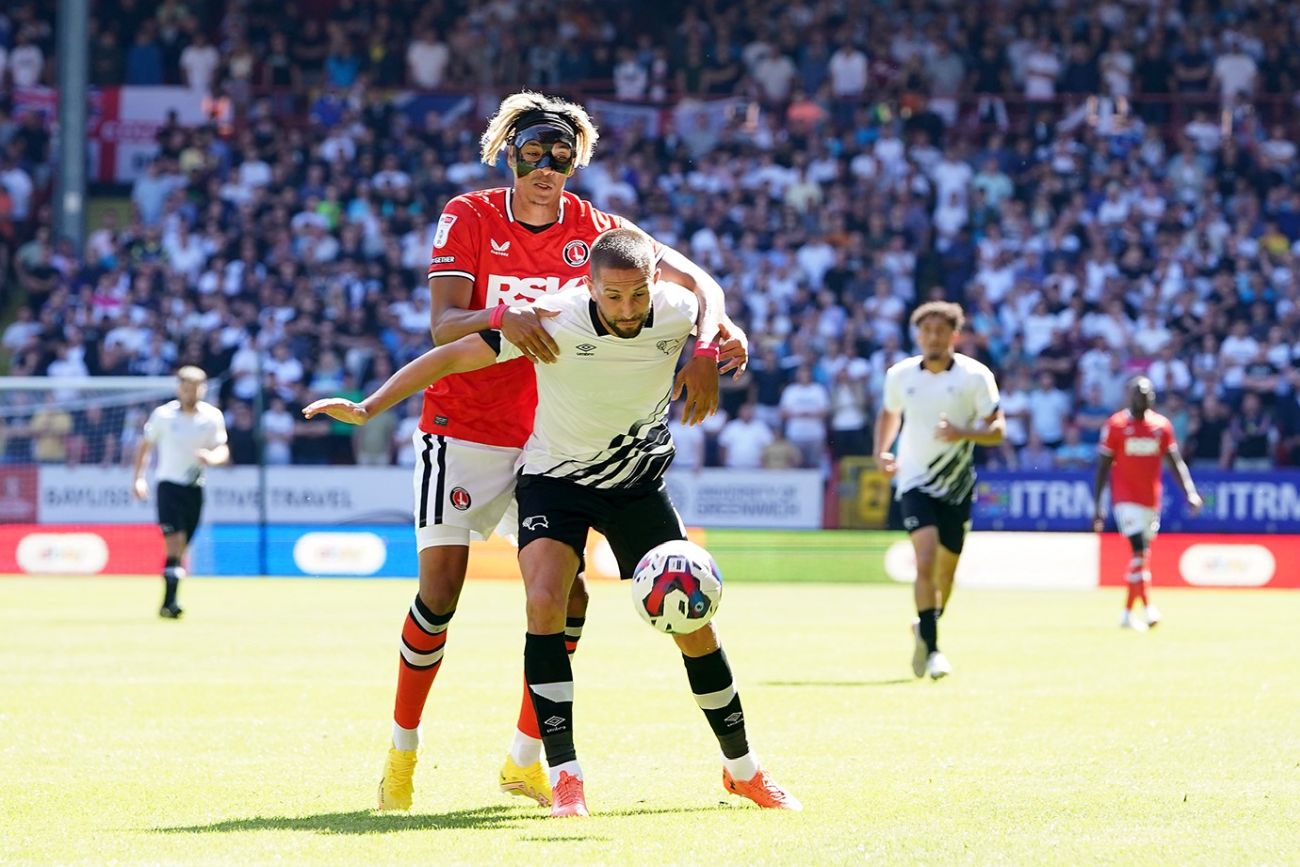 The forward managed to get his shot away, which was tipped away by Joe Wildsmith in the Derby goal but it fell invitingly for Corey Blackett-Taylor who bundled the ball into the back of the net to ensure the points stayed in the capital.

Five minutes later came Derby’s best chance of the game as an inch-perfect cross from Max Bird found the head of Jason Knight, who was unmarked six yards out, but the Irishman headed wide as the Rams fell to defeat against the Addicks.