Derby County will look to cap off an impressive period by extending a six-game unbeaten run in the Sky Bet Championship when they face Aston Villa at Pride Park Stadium, kick-off: 3pm.

Frank Lampard’s side will look to keep their momentum going into the third international break following a 3-1 victory over Birmingham City last weekend and here, dcfc.co.uk has gathered all the information you will need ahead of the clash with Dean Smith’s side.

Frank Lampard said that the game will come too soon for Mason Mount who is dealing with an ankle issue and Craig Bryson who remains out with a small calf problem.

Martyn Waghorn will also be unlikely to feature after leaving the game against Birmingham City last weekend.

Speaking to RamsTV, Lampard said: “We are in good form and have picked up some good results, but it will only be as good as how we finish the patch of games.

“Villa is a very tough game for us on paper, they are a good team and have a good new management team and have individuals that can hurt us but we have been playing well and we are confident, so we have to bring that tomorrow."

He added: “They are a huge name, huge club with great huge history and a new manager and assistant manager who I know very well. They will make changes to them. They are a work-in-progress, as we are here, but you’re seeing the benefits of that."

There is still time to secure your seat to catch the Sky Bet Championship action at Pride Park Stadium.

Season Ticket Holders can benefit from cheaper tickets should they ‘Bring A Friend’ to this fixture and have until 9am on Saturday to take advantage of the initiative. 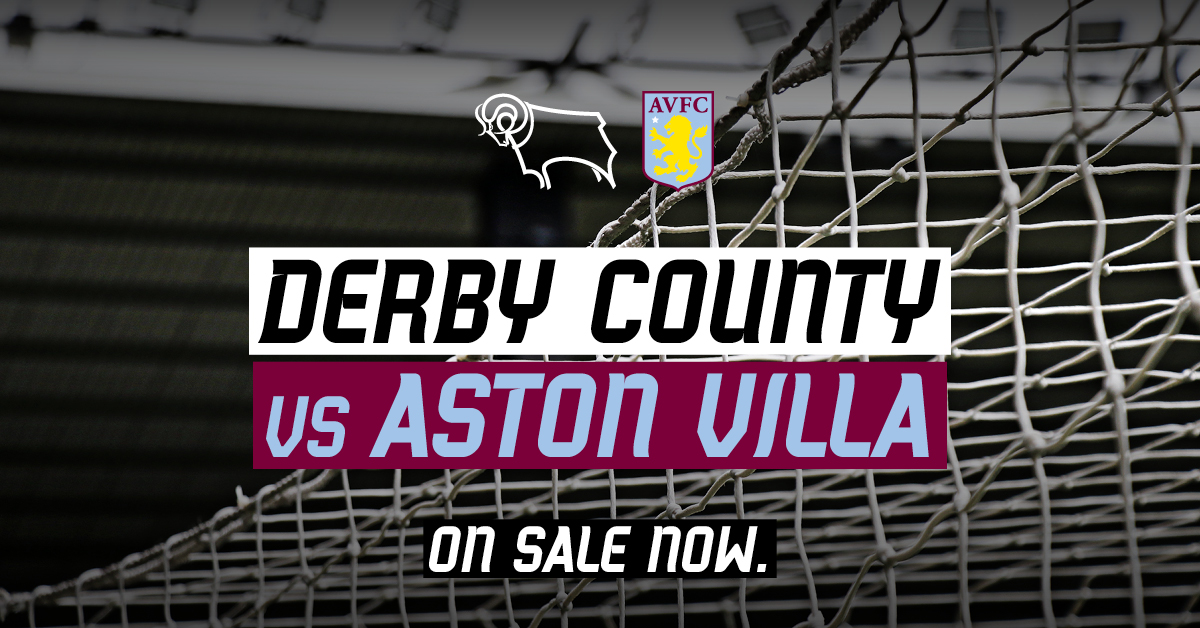 Here are the Bring A Friend prices*:

There is no limit to the amount of tickets Season Ticket Holders wish to purchase.

*Please note the Bring a Friend offer is across all areas of the stadium, excluding hospitality.

Here are the standard prices**:

**Please note that the above pricing is based on Category D & E seating.

The Ram sat down for an exclusive interview with Harry Wilson ahead of the clash at Pride Park Stadium.

Spanning six pages, we spoke to the wideman about his wonder-strike against Manchester United, the support of his family including his grandad who knew from an early age Wilson was destined for big things, and his experience playing under two Premier League legends.

Cameron Jerome opened the scoring at Villa Park as Derby looked to get their second-straight win to secure a play-off place, however, Lewis Grabban equalised in the final minute to get a share of the points.

Jerome fired in a low shot in the first-half to give derby control of the game. Grabban found the equaliser six minutes before the final whistle when he slotted in from close-range.

John Brooks will be the man in the middle when Derby take on Villa on Saturday afternoon. Brooks has produced 38 yellow cards and no red cards after taking charge of 10 Sky Bet Championship fixtures this term.

He has refereed one match involving the Rams so far this season, their 2-1 victory over Hull City at the KCOM Stadium.

Brooks will be assisted by Philip Dermott and Lee Venamore on the lines, whilst Tony Harrington has been appointed as the fourth official.

The trio will build up to kick-off with clips, stats, exclusive interviews and of course, lively studio discussion. RamsTV’s pre-match show is FREE to watch for all, through both dcfc.co.uk, the official DCFC app and on Derby County’s official Facebook page.

Supporters based outside of the UK and Republic of Ireland will then be able to watch every kick of the game (kick-off 3pm) with commentary from Jack Woodward and Shane Nicholson. For Streaming options please click here.

Once the final whistle has been blown, RamsTV will be THE place to be get all the best post-match reaction, including exclusive interviews with Frank Lampard and his players, as well as comprehensive highlights packages.

For a full rundown of what’s coming up on RamsTV, click here.