Derby County will host a special charity matchday at Pride Park Stadium for the mental health charity Mind on Sunday 5th May 2019 (12:30pm kick-off) when they take on West Bromwich Albion. 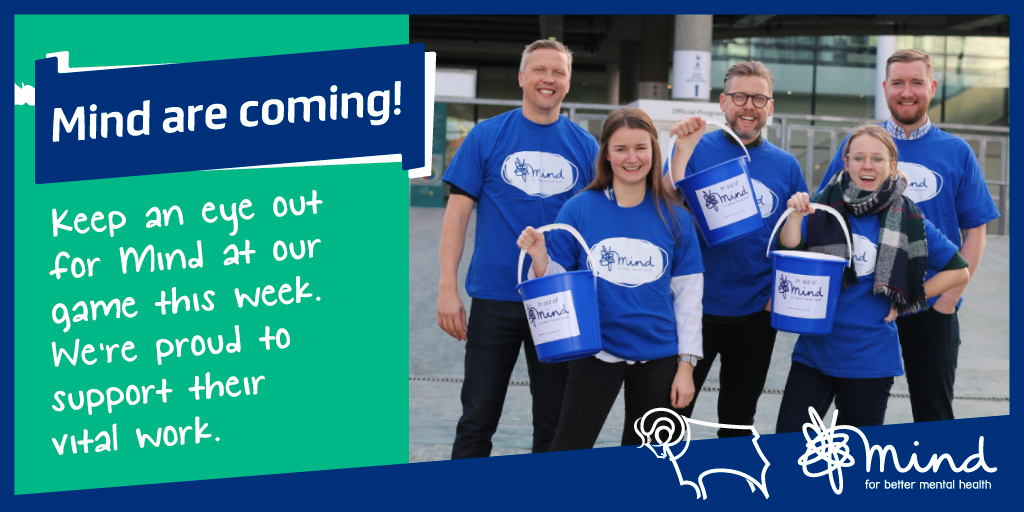 Mind is joining the Rams for the fixture to help raise awareness among fans about mental health and the support the charity provides. Alongside this they hope to raise vital funds to tackle mental health problems.

The matchday comes as part of Mind’s charity partnership with the EFL, which will see the charity work with all 72 EFL clubs, including Derby, to help bring a lasting legacy around mental health in football.

The charity matchday will include:

Mind’s own research shows that over half of people (56 per cent) feel that football fans find it easier to show their emotions at football matches than at any other time.

Mind’s Partnership with the EFL launched at the start of the 2018/19 season and runs for two years.

Paul Farmer, Chief Executive of Mind, said: “Every year, one in four of us will experience a mental health problem. That could be one person in every family, hundreds of football players and many thousands of football fans. Our research suggests that while football fans, particularly men, are comfortable showing their emotions at football matches, many feel unable to reach out for support when they need it. We are proud to be working in partnership with all 72 clubs in the EFL, as part of our charity partnership with them, to be real game-changers in the way football tackles mental health. We hope that events like our match day with [club name] will reach out to fans and let them know that whoever you support, Mind supports you.”

For more information about Mind’s partnership with the EFL and wider work in football visit mind.org.uk/football