Being thrust into the Premier League limelight can be a daunting task, especially at a young age. The pressure and responsibility alone are enough to make aspiring footballers quiver with fear, however, for former Derby County striker Malcolm Christie, he took to it like a duck to water.

His first league start will always be one to remember for the forward who was plucked from non-league obscurity when he signed for the Rams in 1998 from Nuneaton Borough.

After several substitute appearances over a one-year period, he was handed his first start against Middlesbrough at the Riverside Stadium in January 2000.

And when people often talk about taking chances when they come, the then 20-year-old certainly did, scoring two goals in a convincing 4-1 victory.

“I remember the game well,” Christie recalled. “It was one of the highlights when I look back at my career. I remember being a lad with no reputation and had some fleeting appearances as a substitute and then suddenly I was thrown into the lion’s den.

“Jim Smith pulled me to one side and told me he was giving me my opportunity. I knew I had to take it because you can’t be one of those players who get it and don’t take it. The competition level was high so when I got the nod, I knew I had to perform but there was an element of pressure which I thrived on.

“It was a marvellous day and the match went better than expected for both the club and me. It was a huge result and a great day for me.”

Christie was on cloud nine. He had scored two goals in a convincing victory on his first start in the Premier League but forgot to do one key thing after the final whistle.

The forward was a keen collector of football shirts of players he had played against, and with the euphoria of the game, he had forgotten to speak to one of his boyhood idols about the prospect of swapping shirts.

“I remember after that game being interviewed and asked if there is anything I regret about the game, and I said yeah,” he told Colin Gibson, speaking as part of his RamsTV Meets. “I played against one of my heroes growing up, Gary Pallister, and I regretted not getting his shirt.

“A couple of weeks later, a parcel arrived for me; I opened it up and it was a Pallister number six shirt which read: “To Malcolm. All the best. Gary Pallister.” I don’t know if it was set up, but it was such a lovely gesture and I thought it was amazing.”

But one thing from the game that will forever haunt him when he throws open the scrapbook for his grandkids is his hairstyle.

He said: “My hair style was absolutely terrible in the early stages of my career, but we all make mistakes in our lives at some point!”

Whilst his debut was one to remember, what happened a year later was a dream come true for the now 40-year-old.

After growing up as a staunch Manchester United supporter, he found himself crashing their promotion party in 2001 as he scored the only goal of the game in a 1-0 victory for the Rams to secure their Premier League status for another year.

“It was a celebratory mood in the crowd because they were picking up the trophy but we had a job to do,” Christie commented. “I had gone through a baron run of not scoring and Jim stuck with me through a tough time.

“To be given the opportunity to play at Old Trafford and that be the game where if we won, we survived, we couldn’t have picked a better place to go. 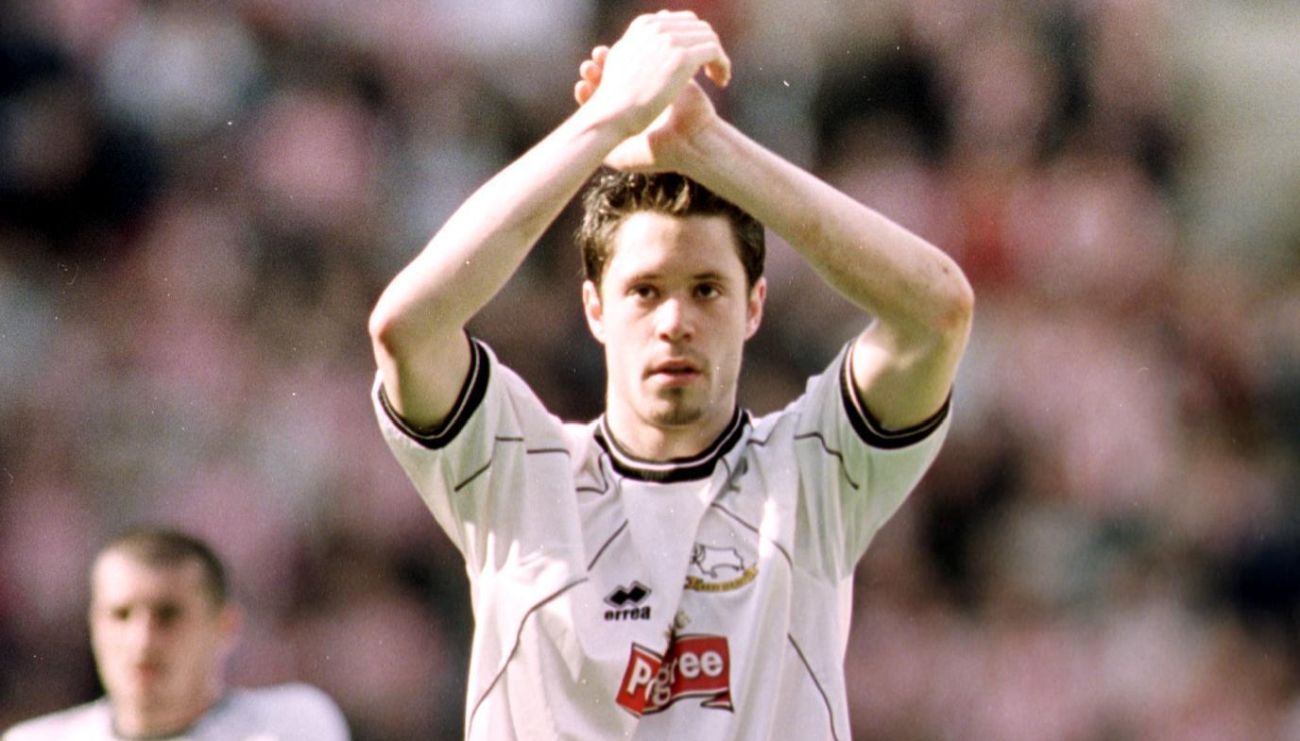 “There was self-belief that we could get a result. I scored a goal in front of the Stretford End, and that’s something I had always dreamed of. Just before I hit the ball, I knew I was going to score. I caught it sweet as a nut and it flew into the top corner.

“I remember running off to celebrate and Horacio Carbonari saying ‘calm, calm’. I was thinking ‘calm? I’ve just scored at Old Trafford playing against Manchester United. I can’t be calm!’

“The moment and feeling I had during that game was amazing and one I’ll never forget.”

Malcolm Christie made 129 appearances for Derby County between October 1998 and January 2003, scoring 35 times in all competitions.