Derby County will take to the Pride Park Stadium turf for the final time in the regular 2019/20 Sky Bet Championship season on Sunday afternoon when they take on Leeds United (2pm kick-off). 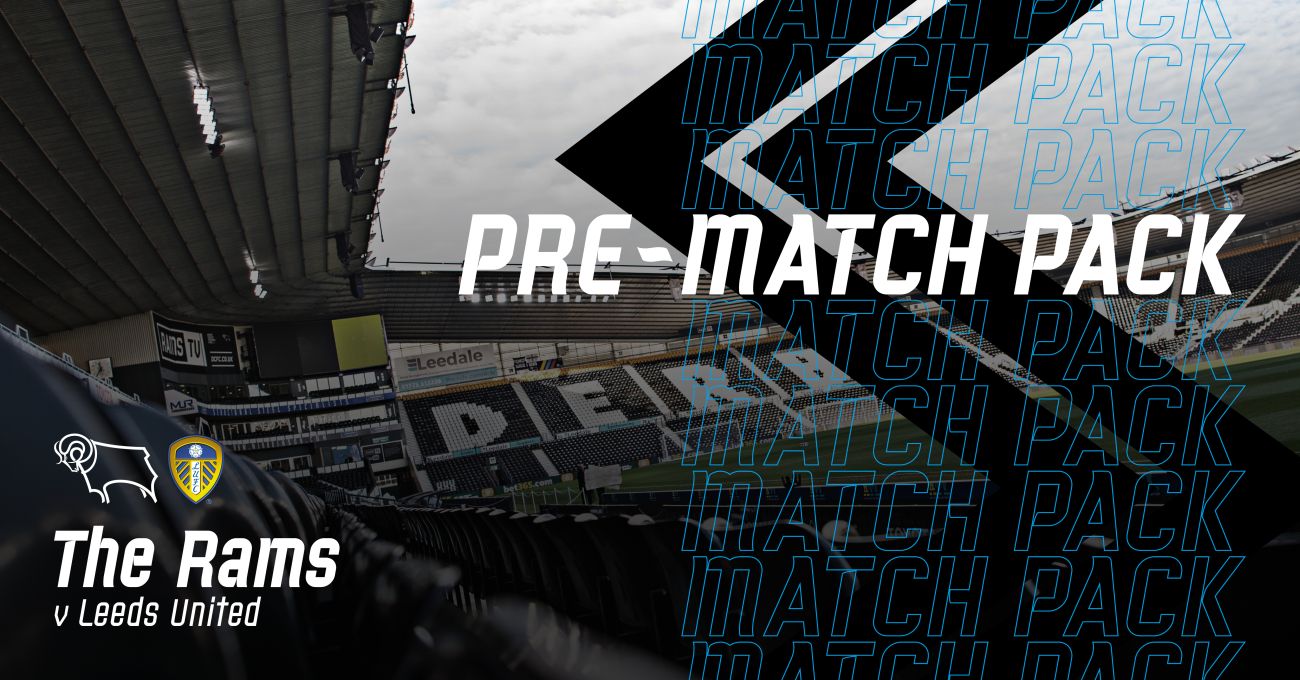 Derby will be looking to end their home campaign on a high note as they look to record a top-half finish to conclude Phillip Cocu's first full season in charge of the Rams.

Leeds, meanwhile, have already secured automatic promotion back to the Premier League - and also the Championship title - following defeats for West Bromwich Albion and Brentford on Friday and Saturday.

dcfc.co.uk has gathered all the information you will need to know ahead of Sunday's game at Pride Park.

Sunday's match has been selected for live coverage by Sky Sports - and supporters are reminded of the usual restrictions for streaming on RamsTV as a result.

The match is also available to watch LIVE on RamsTV via dcfc.co.uk or through the Official Derby County App, but ONLY for Season Ticket Holders who opted for Free RamsTV streaming in the club’s Refund & Exchange Policy because under the terms of the broadcast agreement between the EFL and Sky Sports, pay-per-view streaming is not available to live selections in the UK.

Supporters who live in countries classed as dark market territories can purchase the pay-per-view option to watch the match at the EFL mandated charge of £5 per match.

For those supporters that are able to watch live coverage of Sunday's game, the Matchday Live show starts on RamsTV from 1:30pm - with content being played during the day - ahead of kick-off at 2pm.

Those watching are requested to make sure they login early to avoid missing kick-off.

Season Ticket Holders who opted for Free RamsTV streaming are advised to ensure their current details are registered with dcfc.co.uk, and to make sure of the following:

Striker Martyn Waghorn is available for selection after completing a three-match ban following his red card in the 1-1 draw at home to Nottingham Forest earlier this month.

Waghorn boosts the options available to Derby boss Phillip Cocu as the frontman looks to add to his 12 goals so far this season.

Striker Jack Marriott made his comeback from groin surgery in the closing stages of Derby's 2-1 defeat to Cardiff City in midweek and he is expected to be amongst the substitutes once again.

Defender Andre Wisdom will not be available after he was the victim of an unprovoked assault and robbery at the end of June. He sustained injuries which resulted in him being admitted to hospital and while he is at home, he is still recovering and therefore is unavailable. He is, however, beginning to step up his workload at the training ground.

“Duane Holmes has trained with the team today and if things move forward as planned then he will be available at the weekend,” Cocu told RamsTV on Friday.

Goalkeeper Kelle Roos was handed a place in the starting line-up against Cardiff in midweek, just his second league start in 2020, and he is expected to keep his place between the posts on Sunday after a solid and assured showing against the Bluebirds.

Speaking to RamsTV ahead of Sunday's game, Derby boss Phillip Cocu said: “It is a challenge for us on Sunday against Leeds United because they are top of the table and champions of the Championship.

“We want to put on a good performance against a very strong side. Leeds deserve to be where they are in the table; they have good structure in the team, quality players, can dominate in their performance and defend well.

“It will be a tough game, but we want to end the season well and we will push to get good results in these last two matches.

“We always use our saying ‘never give up’. The play-offs may not be within reach, but it doesn’t mean we can switch off and relax at all.”

He added: “We must show no fear and have bravery to play, and also know what we can and can’t do in certain stages of the game.”

More pre-match comments from Cocu, and defender Craig Forsyth, can be found across dcfc.co.uk and also on RamsTV.

Oliver Langford will be the man in the middle at Pride Park Stadium on Sunday.

Langford has overseen 32 games during the 2019/20 season and produced a total of 127 yellow cards and six reds.

The official took charge of the league fixture between the two clubs earlier in the season as Chris Martin came off the bench to earn Derby a late 1-1 draw at Elland Road.

He also took charge of the Rams' 2-0 home win over Middlesbrough in November, with Tom Lawrence scoring both goals for Phillip Cocu's side against ten-man Boro after George Saville was sent off for a late challenge on Krystian Bielik in the first half.

Langford's last match in charge of Derby was back in November when Phillip Cocu's side were beaten 1-0 at Blackburn Rovers, whilst his last fixture at Pride Park Stadium was the 0-0 draw against Stoke City in March 2019.

Langford will be assisted by Matthew McGrath and Michael George on the lines, whilst Dean Whitestone has been appointed as the fourth official.