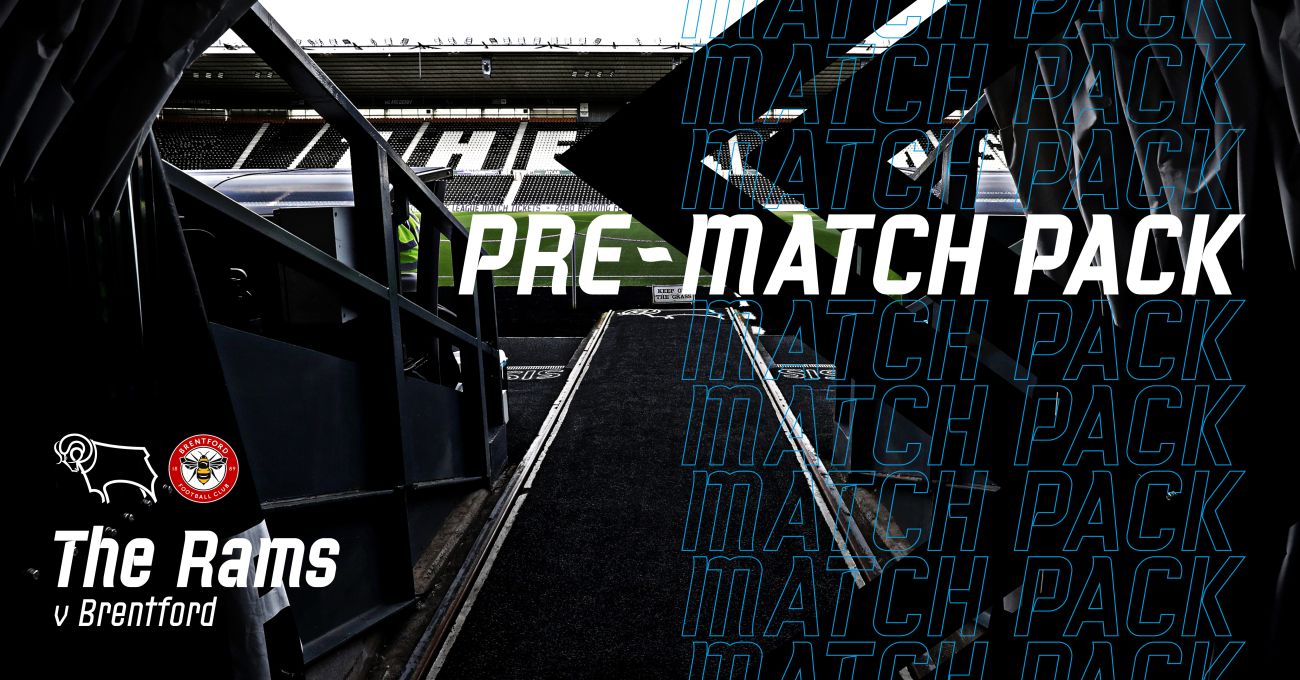 Derby have four matches left to play in the league campaign and will be looking to quickly bounce back from the 2-0 defeat at West Bromwich Albion on Wednesday in their first defeat since the resumption of the season in June.

dcfc.co.uk has gathered all the information you will need ahead of Saturday's game against the Bees, who are in the race for an automatic promotion spot.

Saturday's match - although selected for live coverage by Sky Sports - is available to watch LIVE on RamsTV via dcfc.co.uk or through the Official Derby County App, but ONLY for Season Ticket Holders who opted for Free RamsTV streaming in the club’s Refund & Exchange Policy because under the terms of the broadcast agreement between the EFL and Sky Sports, pay-per-view streaming is not available to live selections in the UK.

For those supporters that are able to watch live coverage of today's game, the Matchday Live show starts on RamsTV from 12pm - with content being played during the morning - ahead of kick-off at 12:30pm.

Those watching are requested to make sure they login early to avoid missing kick-off.

Season Ticket Holders who opted for Free RamsTV streaming are advised to ensure their current details are registered with dcfc.co.uk, and to make sure of the following:

Derby boss Phillip Cocu will have attacker Tom Lawrence available for selection after completing a three-match ban for his sending off in the home fixture against Reading last month.

The Wales international has been a key player for the Rams throughout the season and he is in line for an immediate return to the starting XI.

Striker Martyn Waghorn remains out of action as he still has two matches remaining of his three-game ban for his sending off in the 1-1 draw against Nottingham Forest last weekend.

In other suspension news, Derby midfielder Louie Sibley will be available for selection after an independent Regulatory Commission removed his three-match suspension following a successful claim of wrongful dismissal.

Sibley was sent off for alledged violent conduct, but Derby have successfully appealed the decision and he will not serve a three-game ban,

Midfielder Duane Holmes is a doubt after being replaced late in the first-half of the midweek clash at the Hawthorns due to injury.

The United States international had a tight hamstrong and will have his fitness assessed ahead of kick-off.

Defender Andre Wisdom will not be available after he was the victim of an unprovoked assault and robbery at the end of June. He sustained injuries which resulted in him being admitted to hospital and while he is at home, he is still recovering and therefore is unavailable.

Striker Jack Marriott is once again ruled out as he has a groin injury which has required surgery. He could miss the rest of the season, depending on how his rehabilitation work progresses over the coming weeks. He is now stepping up his workload and will continue to have his fitness assessed.

Speaking to RamsTV ahead of Saturday's game, Derby boss Phillip Cocu said: “We don’t have the luxury of thinking about other games, rivals or anything else.

“Many teams are fighting for the sixth place in the table, to get into a play-off spot, so we know what we have to do on Saturday.

“That’s the only focus and job we have. Don’t think about anything else; we just focus on the game and try to get a good result.”

Cocu added: “It’s a challenge again for us and we will try to get a good result against one of the top teams - and the next opportunity is Saturday.”

More pre-match comments from Cocu, and midfielder Graeme Shinnie, can be found across dcfc.co.uk and also on RamsTV.

Tim Robinson has been appointed as this weekend's Match Referee.

Robinson has overseen 30 games during the 2019/20 season and produced a total of 88 yellow cards and one red card.

His last match in charge of Derby came in the 2-2 draw at Middlesbrough back in January, booking Matt Clarke and Martyn Waghorn in the fixture at the Riverside Stadium.

He also took charge of the Rams' 2-2 draw at Stoke City back in August and the 1-0 home win over Preston North End in November.

Robinson will be assisted by Ian Cooper and Andrew Fox on the lines, whilst Stephen Martin has been appointed as the fourth official.