Derby County are back on the road on Wednesday afternoon as they make the short journey across the Midlands to take on West Bromwich Albion in their latest behind-closed-doors Sky Bet Championship fixture (5pm kick-off). 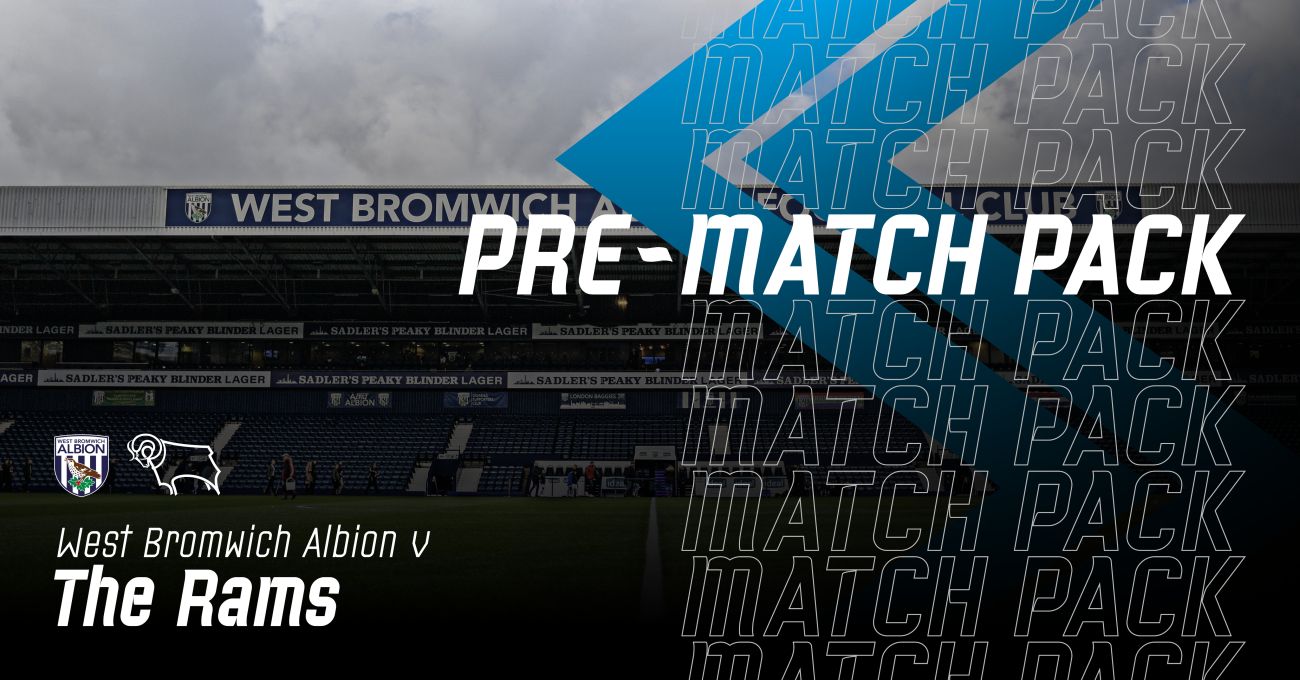 Derby have five matches left to play in the league campaign and they will be looking to extend their unbeaten run to seven matches, having recorded five wins and a draw from their previous six league outings.

dcfc.co.uk has gathered all the information you will need ahead of the midweek trip to the Hawthorns, following Saturday's 1-1 draw against Nottingham Forest at Pride Park Stadium.

With Derby County’s next two Sky Bet Championship behind-closed-doors matches against West Bromwich Albion and Brentford selected for live coverage by Sky Sports, supporters are reminded of the usual restrictions for streaming RamsTV.

Wednesday's meeting with the Baggies, and the home fixture against Brentford on Saturday 11th July (12:30pm), will be available to watch LIVE on RamsTV via dcfc.co.uk or through the Official Derby County App, but ONLY for Season Ticket Holders who opted for Free RamsTV streaming in the club’s Refund & Exchange Policy because under the terms of the broadcast agreement between the EFL and Sky Sports, pay-per-view streaming is not available to live selections in the UK.

Season Ticket Holders who opted for Free RamsTV streaming are advised to ensure their current details are registered with dcfc.co.uk, and to ensure the following:

Derby boss Phillip Cocu is set to start with Chris Martin in attack again with striker Martyn Waghorn starting a three-match ban following his dimissal in Saturday's draw with Forest for a high and late challenge on Ryan Yates.

Martin scored his 11th goal of the season against the Reds and, as Derby's only senior striker, he is set to lead the line once again.

Cocu will also be without forward Tom Lawrence as he serves the final game of a three-match ban following his red card at the end of the recent 2-1 home win over Reading.

That means Jason Knight, Duane Holmes and Florian Jozefzoon are the options available for Cocu out wide at this time.

Defender Andre Wisdom will not be available after he was the victim of an unprovoked assault and robbery just over a week ago. He sustained injuries which resulted in him being admitted to hospital and, despite being released, he has missed the Rams' last two matches.

Striker Jack Marriott is once again ruled out as he has a groin injury which has required surgery. He could miss the rest of the season, depending on how his rehabilitation work progresses over the coming weeks.

Speaking to RamsTV ahead of Wednesday's match, Specialist First Team Coach Liam Rosenior said: “We are playing a superb West Bromwich Albion team on Wednesday who have just beaten Hull City 4-2 and look like they are going to be part of that top two, but we are confident in our own ability and the way that we are playing.

“A lot has been said about our form since the turn of the year, so we have to remember that we are a real contender in this league at the moment and we need to have faith in the way that we play.

“You have to play every team twice; it’s the same rule in every league and in every country.

“You play the same teams twice so for me, we will be where we deserve to be.

“We can’t start thinking about how we affect other things, we just want to affect our season and our performances the best way that we can.”

More pre-match comments from Rosenior, and defender Matt Clarke, can be found across dcfc.co.uk and also on RamsTV.

Jeremy Simpson will be the man in the middle at the Hawthorns.

Simpson has overseen 26 games during the 2019/20 season and produced a total of 89 yellow cards and six reds.

His last match in charge of Derby came at the end of December 2019 as the Rams claimed a 2-1 home win over Charlton Athletic, thanks to a brace from Jason Knight. Midfielder Krystian Bielik was sent off that evening for a late challenge on the Addicks' Conor Gallagher early in the first-half.

Simpson will be assisted by Nick Greenhalgh and Robert Hyde on the lines, whilst Ben Toner has been appointed as the fourth official.