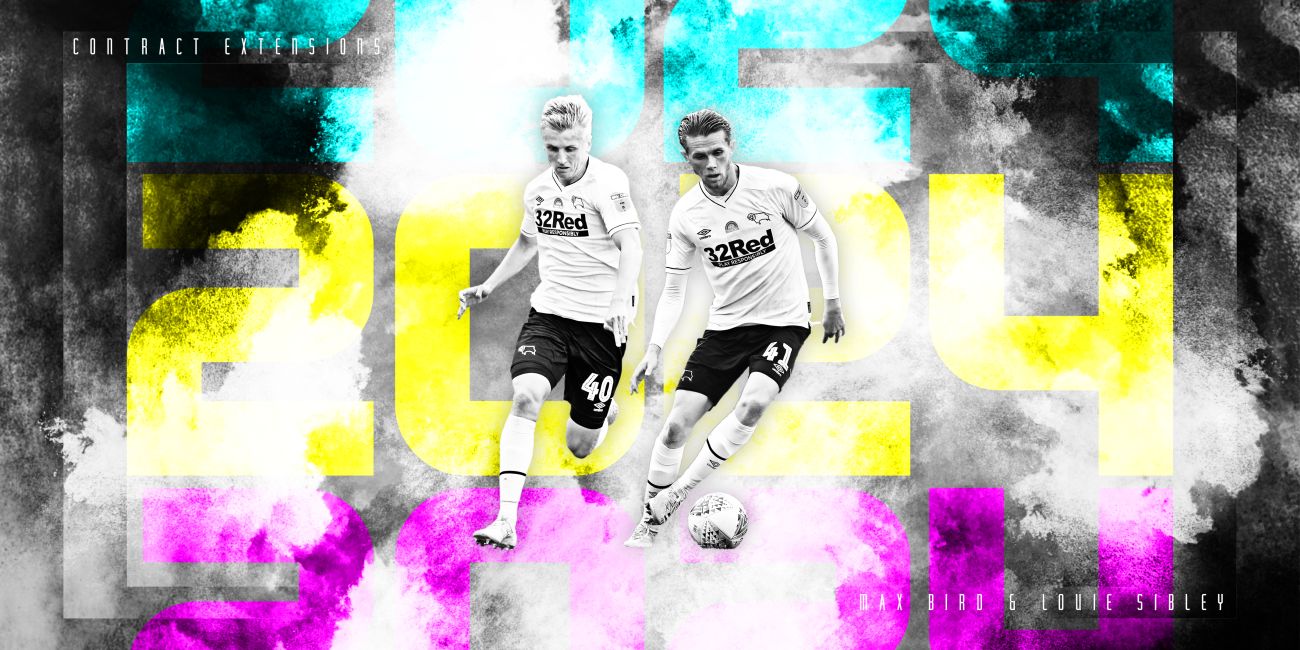 The Academy graduates have put pen-to-paper on deals which will both run until the summer of 2024.

The duo have impressively stepped up from the club’s youth set-up to become important members of manager Phillip Cocu’s first-team squad over the last 12 months.

Bird and Sibley, alongside fellow youngsters Jason Knight, Morgan Whittaker and Lee Buchanan, built on an historic 2018/19 title-winning campaign at Under-18 level by enjoying their breakthrough seasons in 2019/20.

Attacking midfielder Sibley, 19, made his first-team bow last season and netted the Rams’ Goal of the Season with a superb long-range strike against Blackburn Rovers on his full league debut, while he also netted an impressive hat-trick at Millwall in June.

Offering his reaction to the news, Cocu said: “We are delighted to tie Max and Louie down to these long-term contracts at Derby County.

“It is something they deserve. Both the players and the club can be extremely happy with this news.

“For us as a club, I think it is important to show the youngsters that they don’t always have to wait until the last moment to talk about their contract. They have played well; they are important for the team and we have them on long-term deals.”

Bird, who has captained Derby in recent weeks with Wayne Rooney out of action due to injury, said: “I have been at this club since I was ten years old and I am delighted to get this contract signed.

“I took steps in the right direction last season and now I want to continue in that way and cement my place in the team.”

He added: “I want to keep developing my game, become more of a leader on and off the pitch and help the team to challenge at the top end of the table.”

Sibley, who turned 19 last weekend, said: “I grew up supporting the club, so I am really happy to sign this new contract.

“I just want to continue to work hard and push myself to remain part of the team. I want to be a key player and after signing this new contract, it is time to kick on again.”

He added: “I am really proud to play for Derby County.”

Bird has made 38 appearances at first-team level for Derby, after he initially made his professional debut as a 16-year-old back in 2017 in the Carabao Cup,

He made a handful of first-team appearances under former manager Frank Lampard in 2018/19, during which time he was named as the EFL’s Apprentice of the Year, but he has flourished under Cocu and was a regular in the Rams’ side in the second half of last season.

Sibley has made 20 first-team appearances for Derby and recorded his first senior outing, also in the Carabao Cup, at the beginning of last season at Scunthorpe United.

A handful of appearances in the Emirates FA Cup followed in early 2020 and, after a superb full league bow against Blackburn Rovers prior to the COVID-19 pandemic, he remained a key member of the side when the season resumed in June.