Derby County fell to a 1-0 defeat to Norwich City in the Sky Bet Championship at Pride Park Stadium. 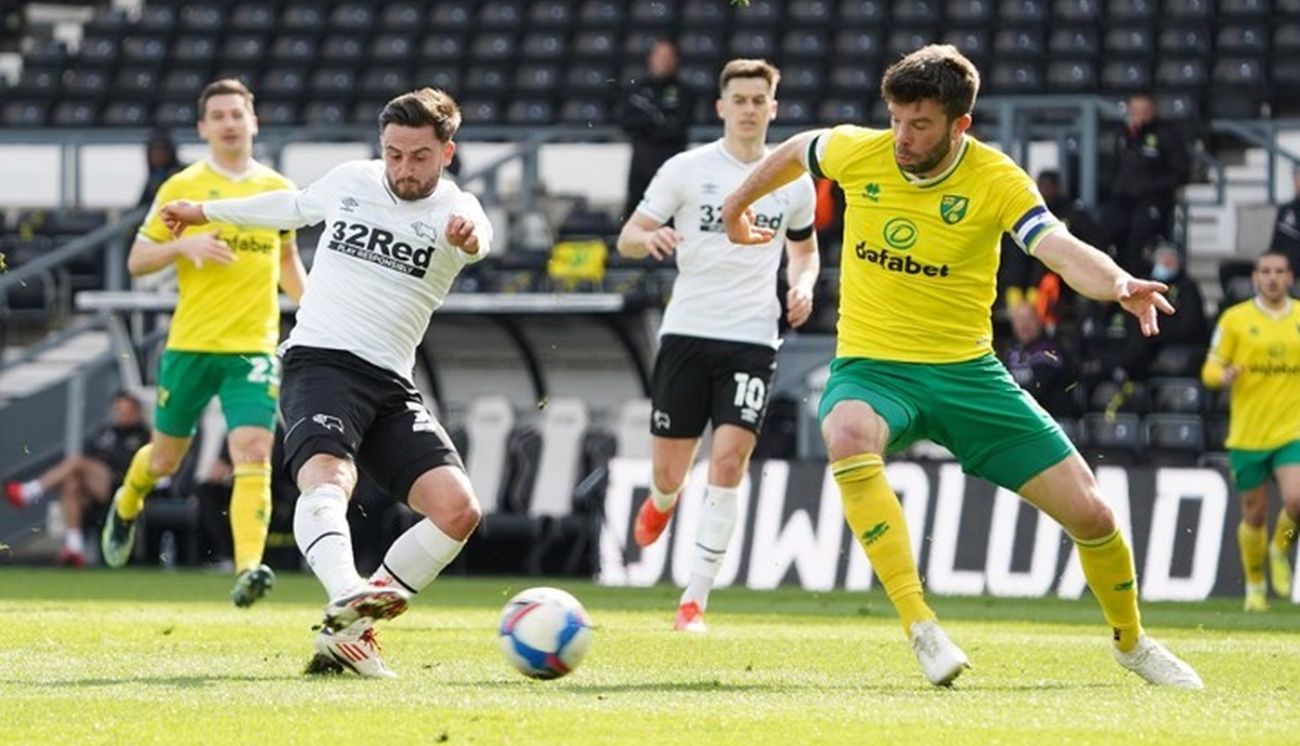 Ahead of the game, a two-minute silence was held in memory of His Royal Highness The Prince Philip, Duke of Edinburgh.

Kieran Dowell scored the only goal of the game, coming after 21 minutes as his free-kick struck the back of the net. The Rams stood up well to the league leaders and Colin Kazim-Richards, Teden Mengi and Patrick Roberts called Tim Krul into action in the second half, but Wayne Rooney’s side couldn’t find the leveller.

Festy Ebosele made his Championship debut, replacing Kornell McDonald who made his first senior start after Nathan Byrne was forced to leave the game previous against Reading after a head collision.

Norwich had two free-kicks awarded in the opening 20 minutes as both Graeme Shinnie and Craig Forsyth were booked for fouls right on the edge of the box on Todd Cantwell then Dowell. 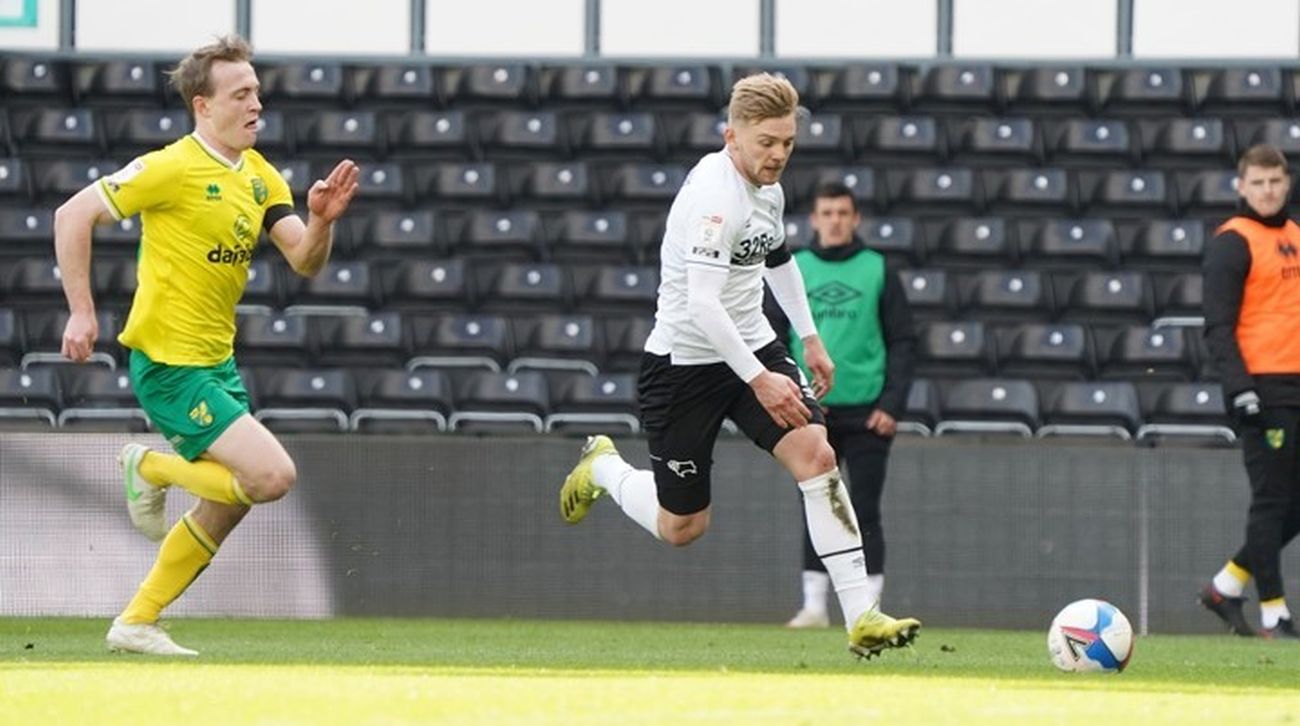 Dowell stepped up to take the set pieces, both from a similar position just to the right on the edge of the area. The first, he drilled into the side netting, however on the 21-minute mark he struck the second into the top corner.

Midway through the half, the Rams got forward, with Shinnie picking out Tom Lawrence just inside the box from the left side. Lawrence turned to face goal and created space, before firing a low shot just wide of the bottom corner.

For the next five minutes Derby went on the attack. A good move saw Kazim-Richards find Roberts’ run on the right side and the winger took aim from a tight angle and was thwarted by Krul. 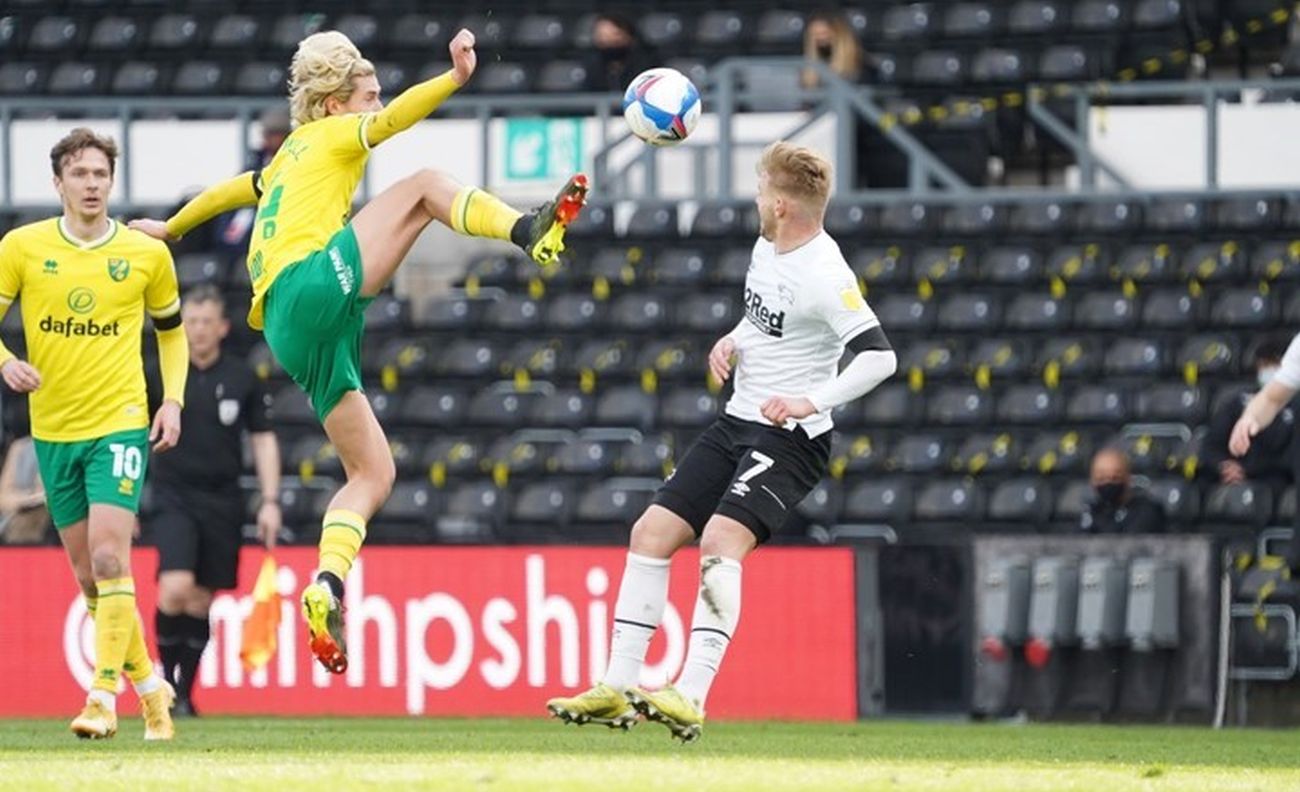 The Rams kept the attack alive and the ball was worked around the box for Kamil Jozwiak to square infront of goal, but Grant Hanley was well placed to turn the ball behind for a corner.

With ten minutes left to play in the half, a swift counter-attack by the Canaries resulted in Emiliano Buendia cutting back for Cantwell on the edge of the box to hit a first-time effort on target, but David Marshall got down to equal it. 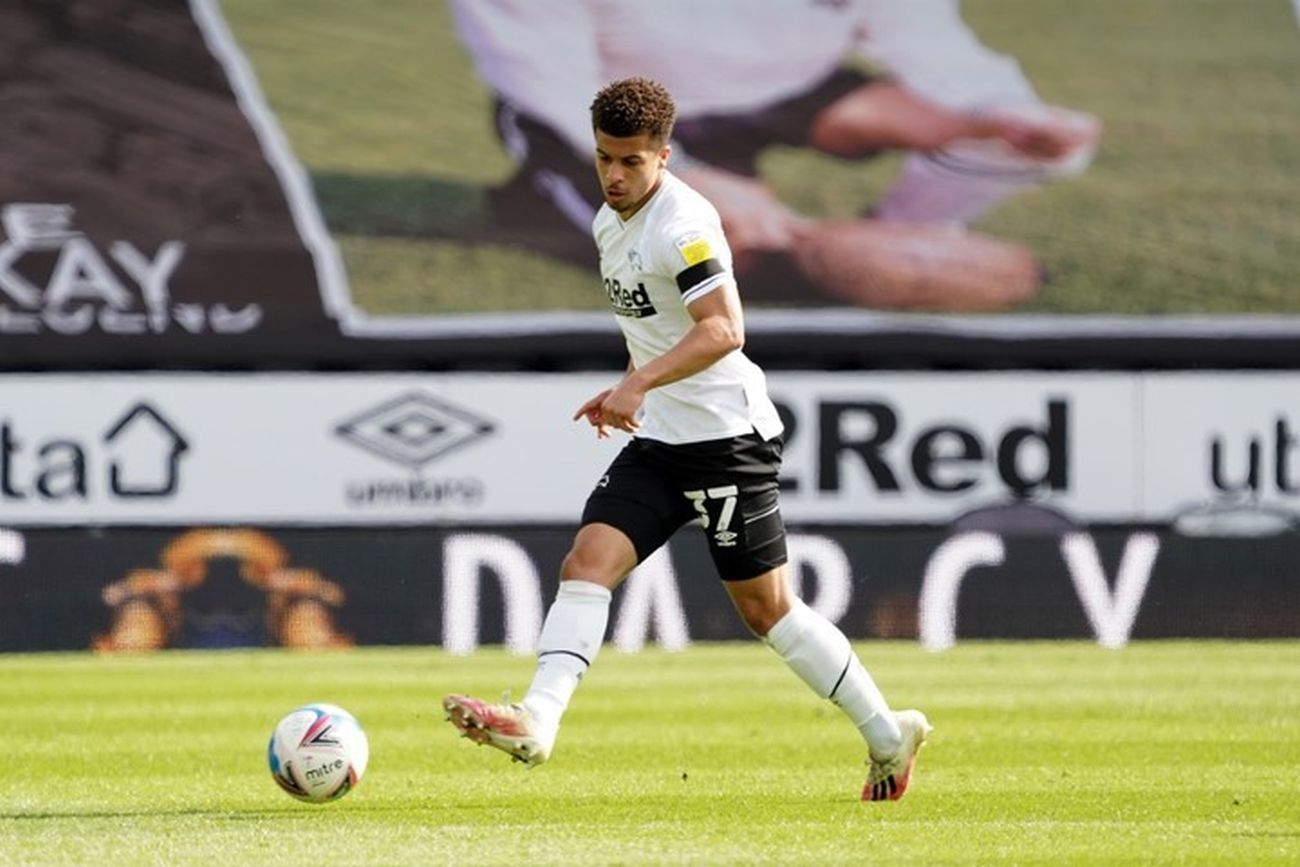 Derby looked bright in the opening stages of the second half. Kazim-Richards got to a ball over the top of the Norwich defence. He managed to get it under control by the post to get a shot off, but it was met by Krul to turn it around the post.

The resulting corner was played short to Jozwiak, who drove into the box before he found Lawrence on the edge of the area. Lawrence chipped the ball into the box and it fell Teden Mengi who whipped his powerful effort goal-bound drawing an instinctive save from an outstretched Krul.

The Rams continued to look for openings and it almost came with 15 minutes left to play. Forsyth picked up a loose ball in the Derby half after Norwich went on the counter-attack and the Rams quickly moved the ball back up the pitch to Roberts on the right side. 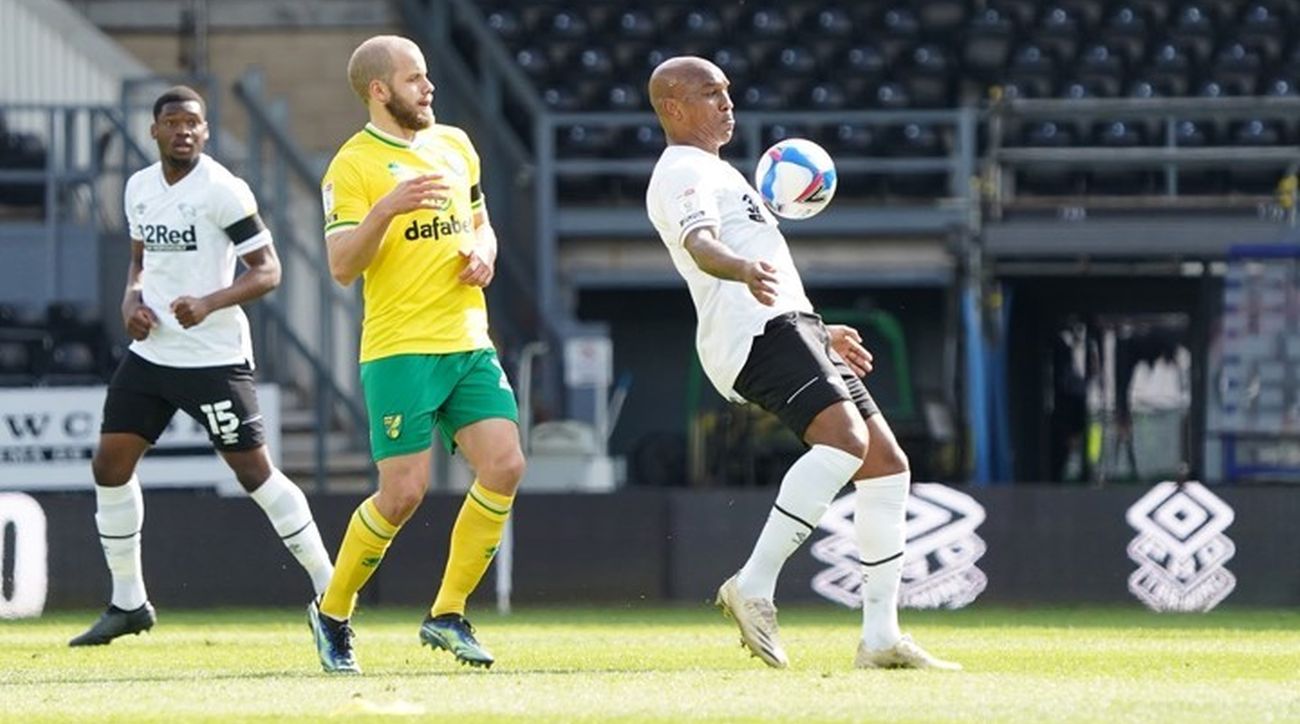 The winger waltzed into the area, powering past three defenders to close in on the near post, but Krul slid in to strip the ball away as he looked to shoot.

In stoppage time, Kazim-Richards snatched the ball with Krul outside the area. He beat the keeper down the left of the area and cut back for Shinnie, who sent his effort over the crossbar. 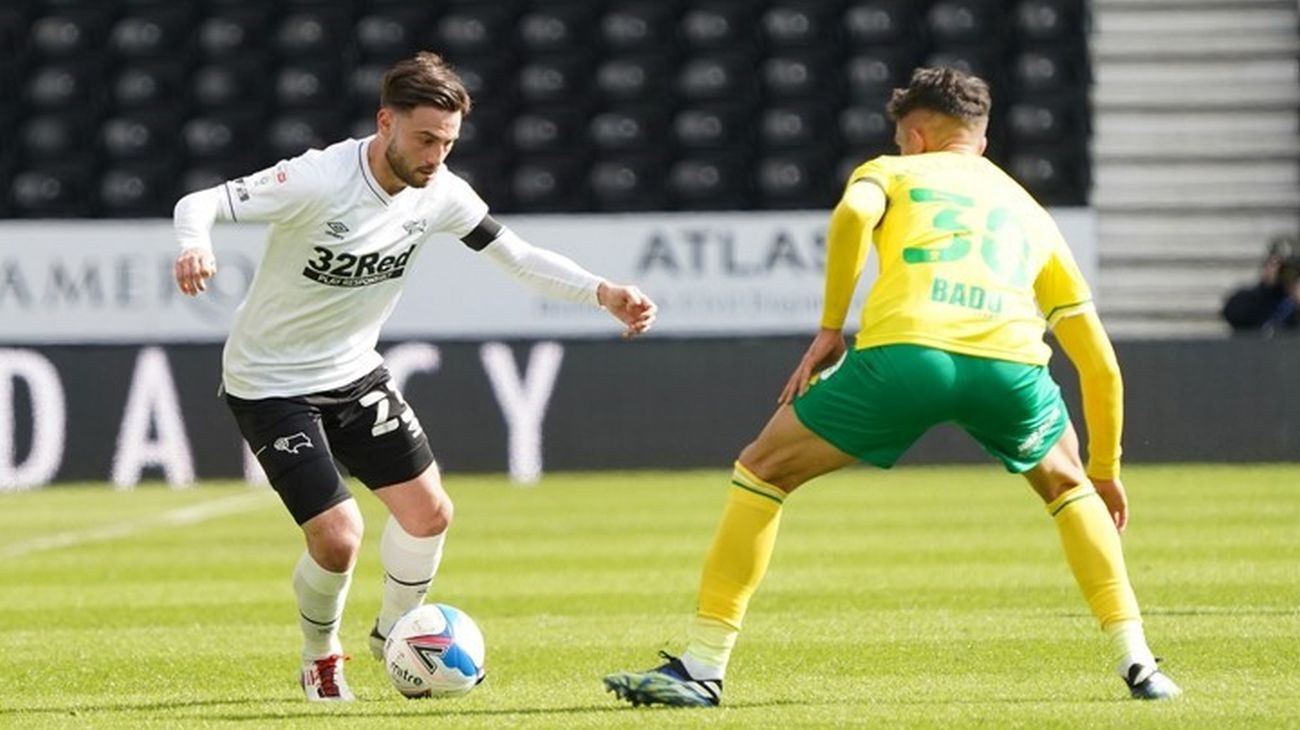