Derby County fell to their second defeat of the season as they were beaten 2-0 by Birmingham City at St Andrews. 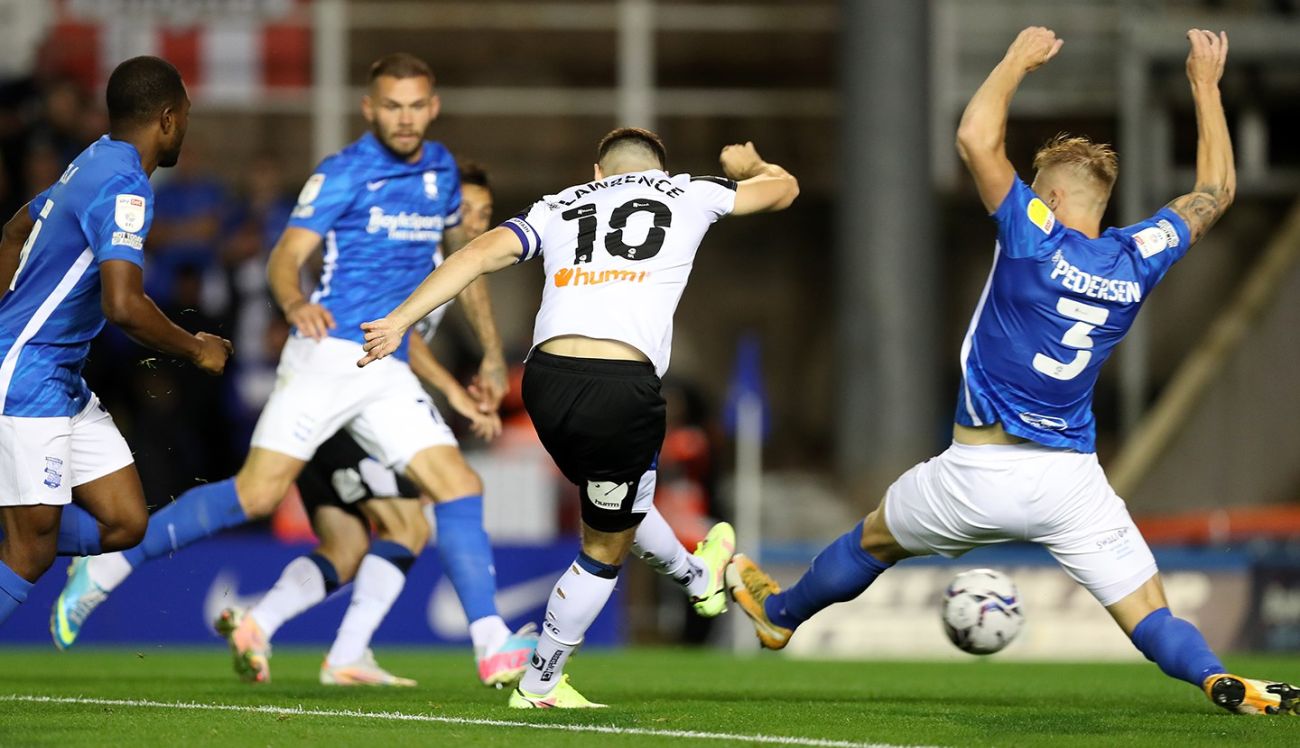 A goal in either half was enough for the Blues to earn all three points on a disappointing evening for the Rams following the international break.

Striker Scott Hogan had given the home side the lead on the half hour mark, guiding the ball into an empty goal following an earlier error, whilst Jeremie Bela made sure of the points with only ten minutes remaining as he fired home to ensure Birmingham City gained maximum points.

Manager Wayne Rooney made two changes to his side which drew 1-1 with Nottingham Forest before the international break as Lee Buchanan replaced Craig Forsyth, who served the first of his three match ban, whilst Sam Baldock returned from injury and started in attack for the Rams. 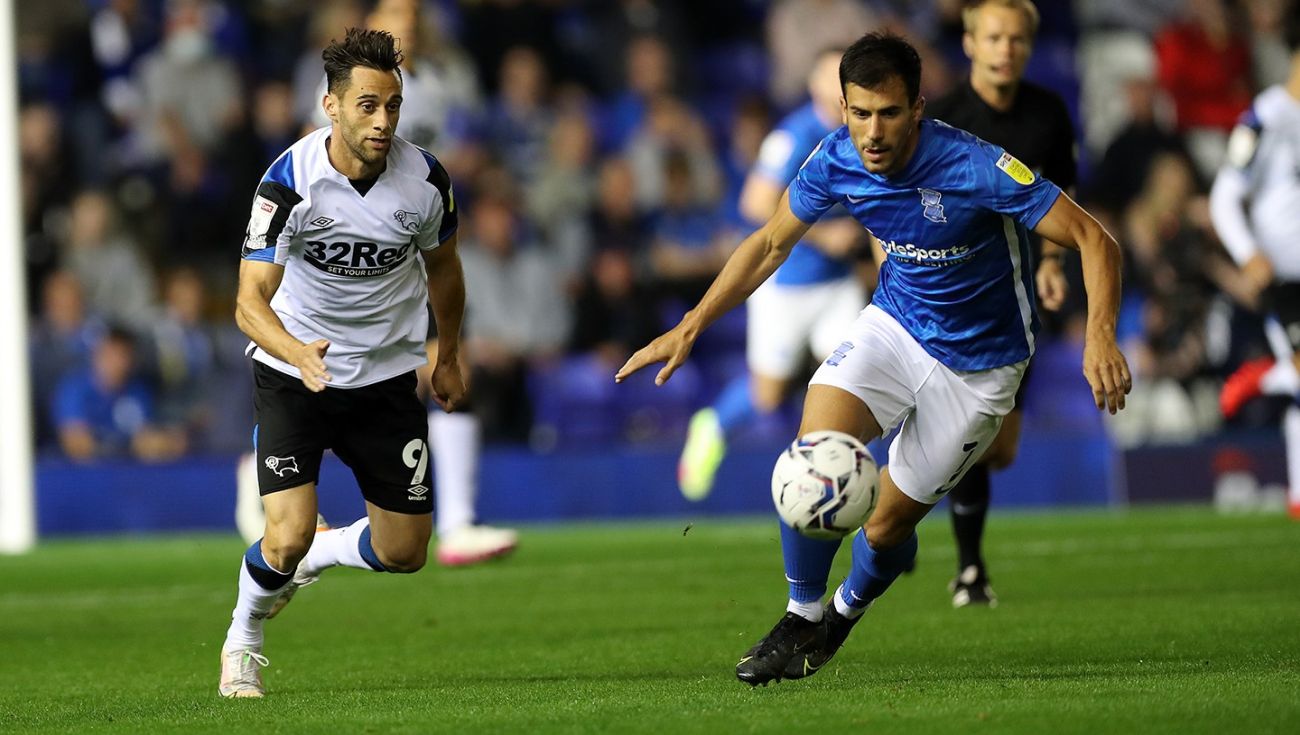 And it was Derby who almost took the lead on five minutes. Neat play around the edge of the area saw Ravel Morrison presented with the ball. He fired a pass into the feet of Nathan Byrne who laid it into the path of Tom Lawrence to shoot but his effort was saved by Birmingham City goalkeeper Matija Sarkic. 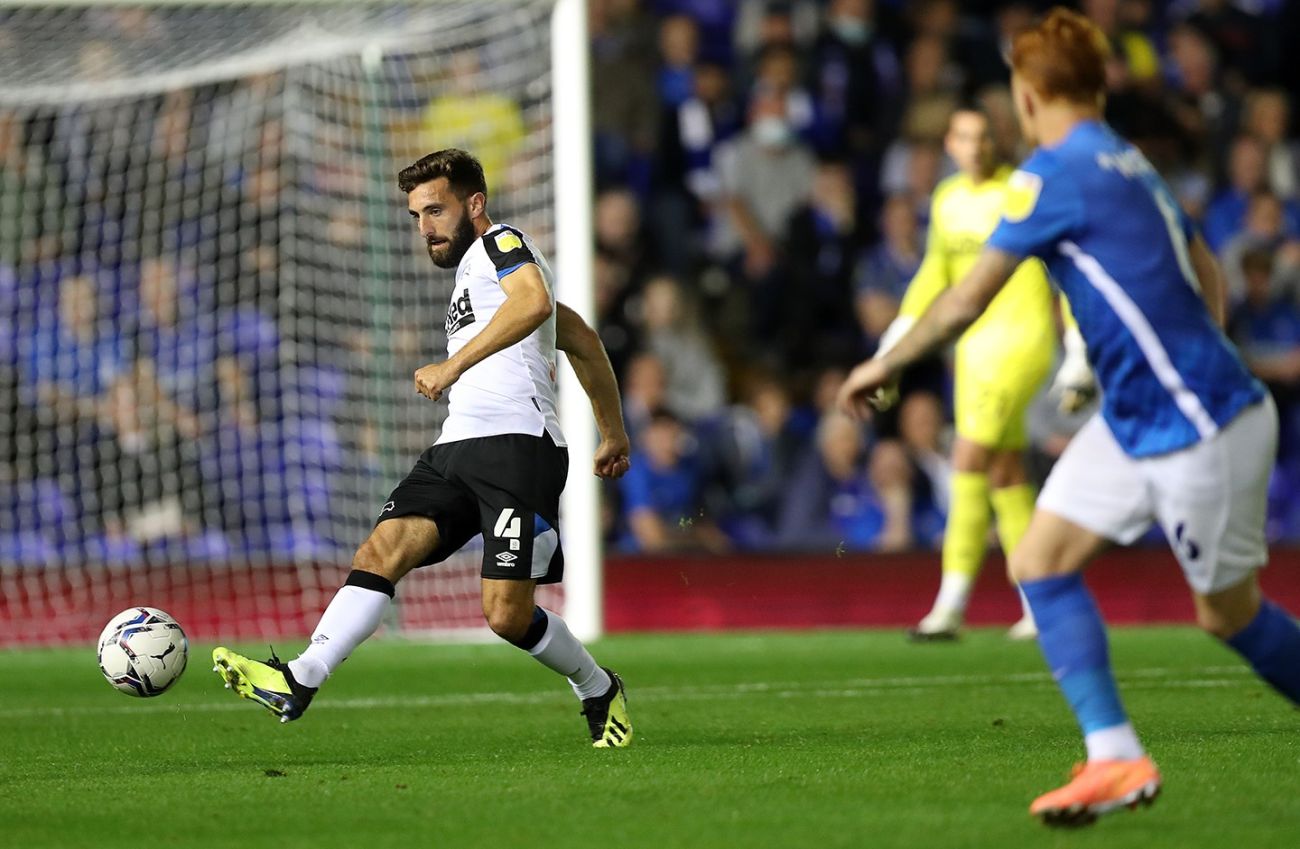 It was a relatively good start to the game by Derby who imposed their game on the home side, however, Birmingham’s physical threat in attack, mainly from Lukas Jutkiewicz started to take effect. 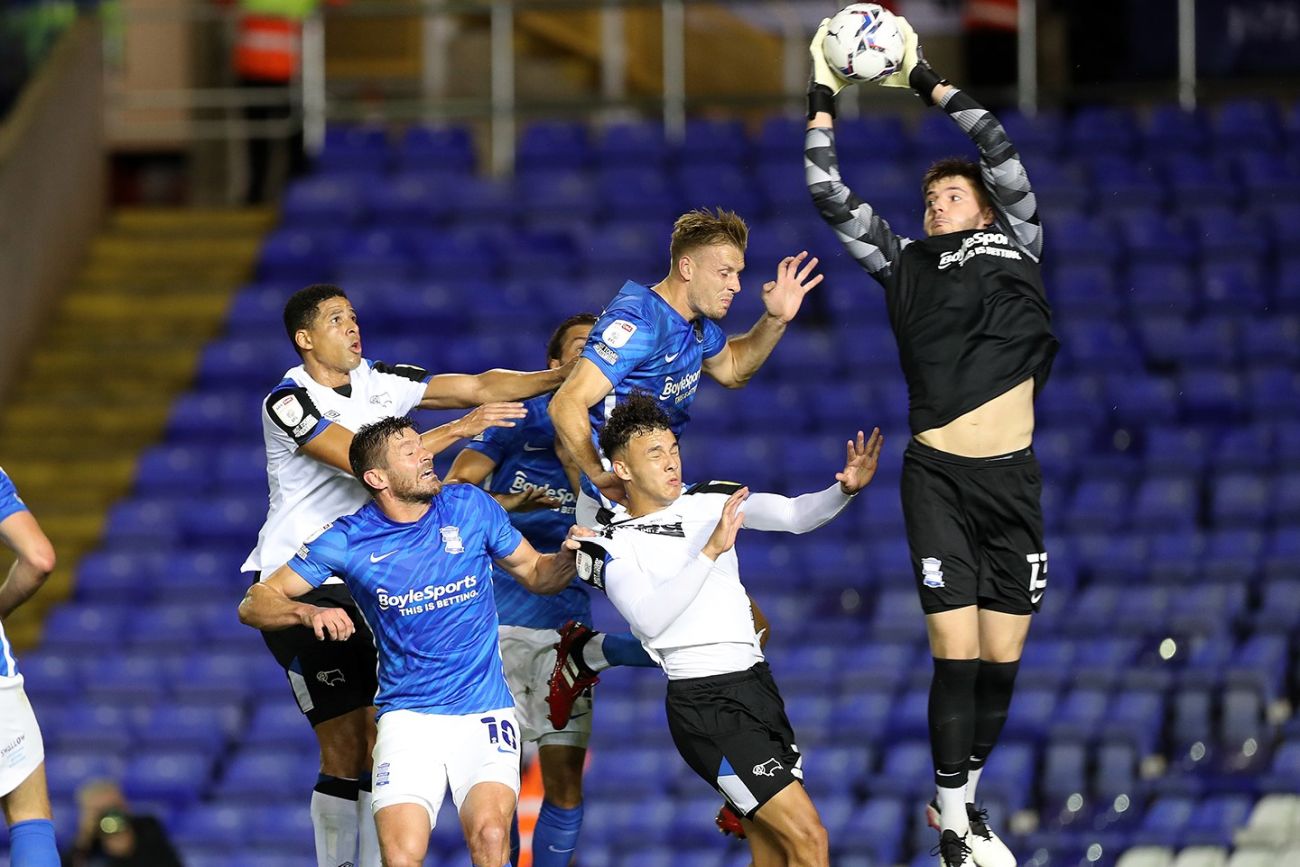 However, on the half hour mark, an error at the back gifted Birmingham the opening goal of the game. A loose pass back was picked up by Jutkiewicz but Kelle Roos was out quickly to deny the striker. The ball came back to Jutkiewicz who crossed towards goal and Hogan was at the back post to guide into an empty net to give Blues the lead.

And another error at the back almost presented Lee Bowyer’s side their second of the evening. Jagielka slipped as he received a pass from Roos but Hogan’s long range effort went wide of the post.

The Rams, and particularly Rooney, was left incensed at the end of the half as Louie Sibley latched on to a through ball and raced through on goal. He was chased by two Birmingham defenders and after a coming together, Sibley was knocked off balance and to the floor, but the referee let play continue. 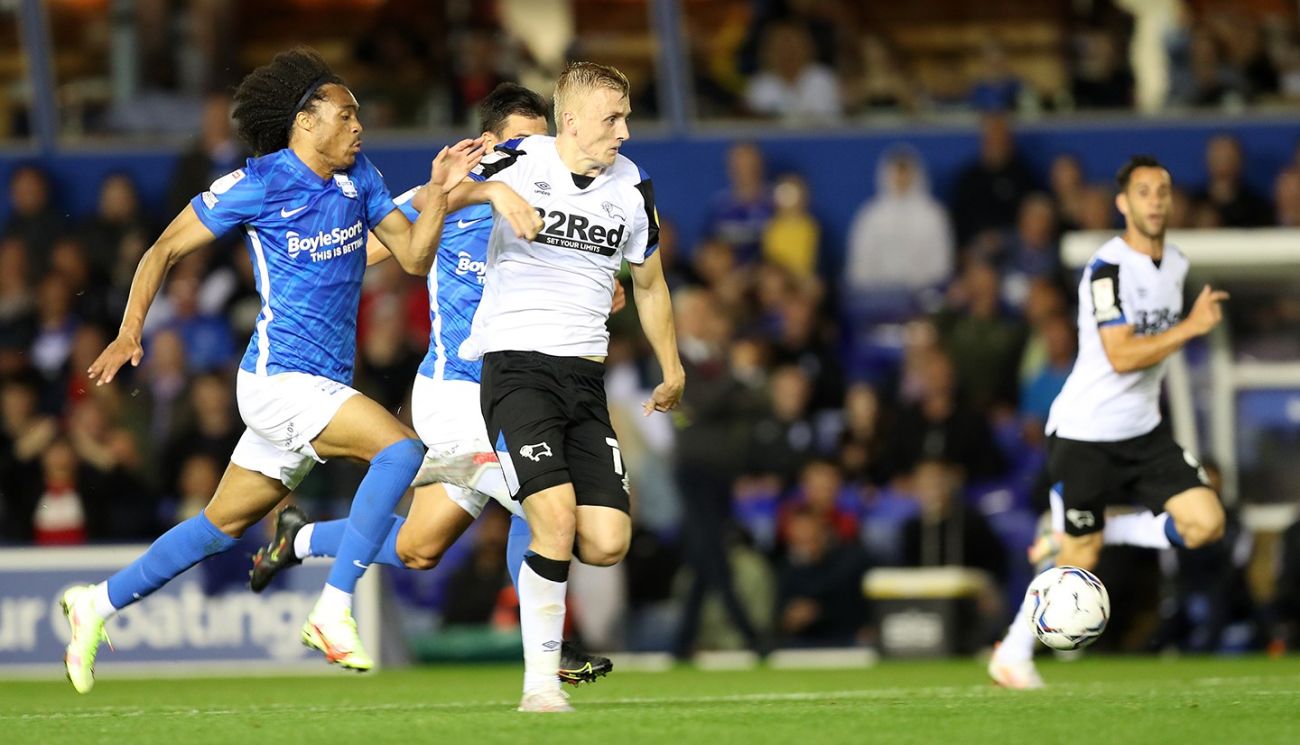 Derby did have one opportunity before the half time interval as Tom Lawrence was fouled 30 yards from goal. He picked himself up and took the set piece but fired into the wall as the Rams went into the half time break a goal behind.

Rooney made a change at half time and brought on Academy graduate Jack Stretton in place of Graeme Shinnie who had picked up a yellow card in the first half. The manager moved to a two-man strike force as they eyed a way back into the game in the second half. 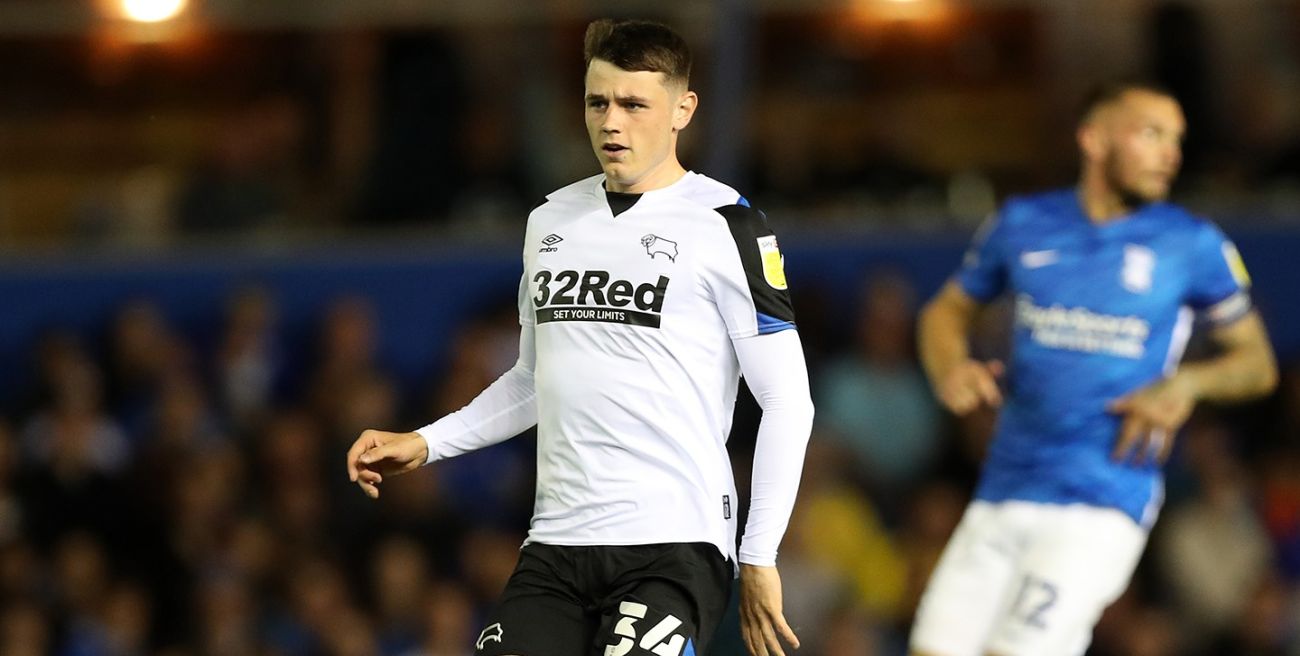 The first opportunity of the second half fell the way of the home side as Jeremie Bela ghosted in at the back post and fired wide.

Derby needed a way back into the game and were doing their best to stay in the game, despite the home side threatening Roos.

On the hour mark, the Rams had a great opportunity to level the scores. Sibley did well on the right hand side to get around his man and cross. Whilst it was headed away, it was only headed into the path of Lawrence who dummied one man and shot but Sarkic was equal to his effort. 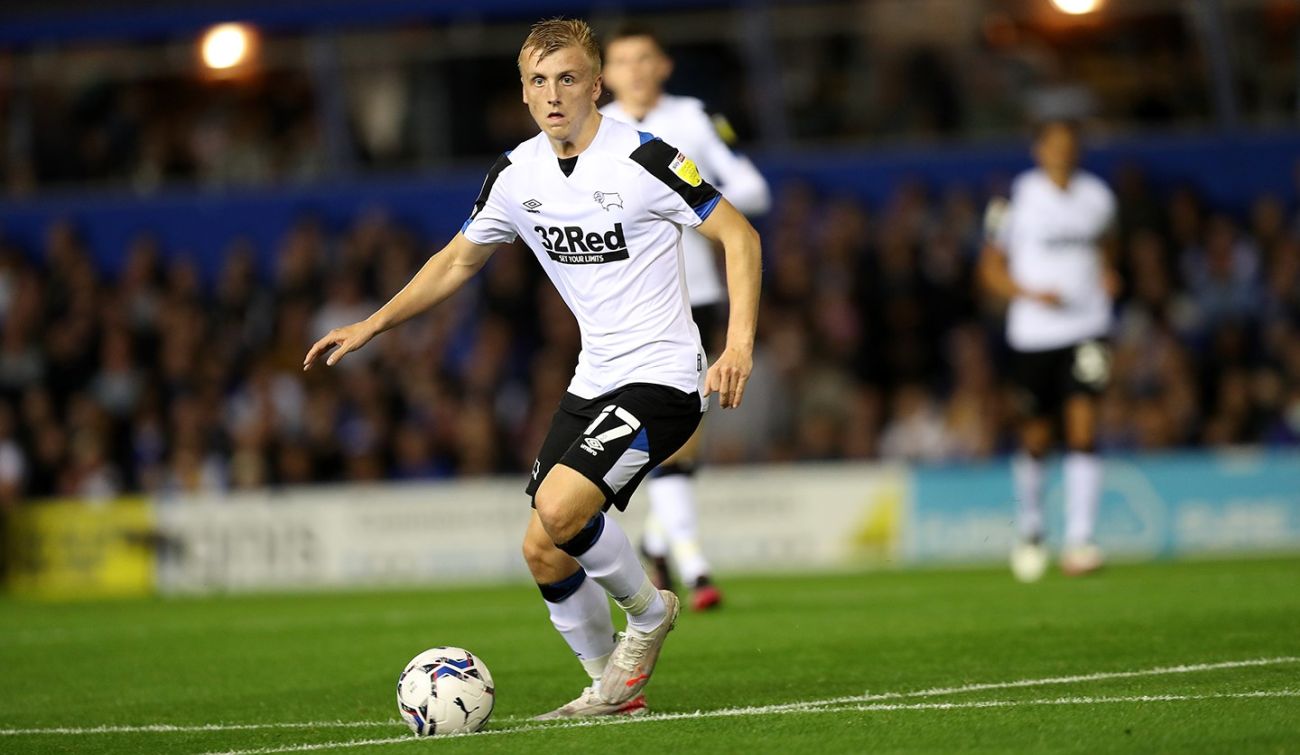 As Birmingham introduced former Watford striker Troy Deeney for his debut, the Rams upped the tempo as they twice troubled the Blues’ defence.

Firstly, Lawrence found Baldock racing through the middle. The striker, on his weaker foot, took aim from the edge of the box but Blues defender Harlee Dean managed to block his effort on goal, whilst a minute later, Morrison shot from 25 yards which went over the crossbar.

However, with ten minutes to go, Birmingham made the game safe as Bela doubled the home side’s lead. After a tackle in midfield found its way to Bela on the left, he took a touch and found the bottom corner to put the game beyond Derby’s reach as they suffered their second defeat of the campaign.