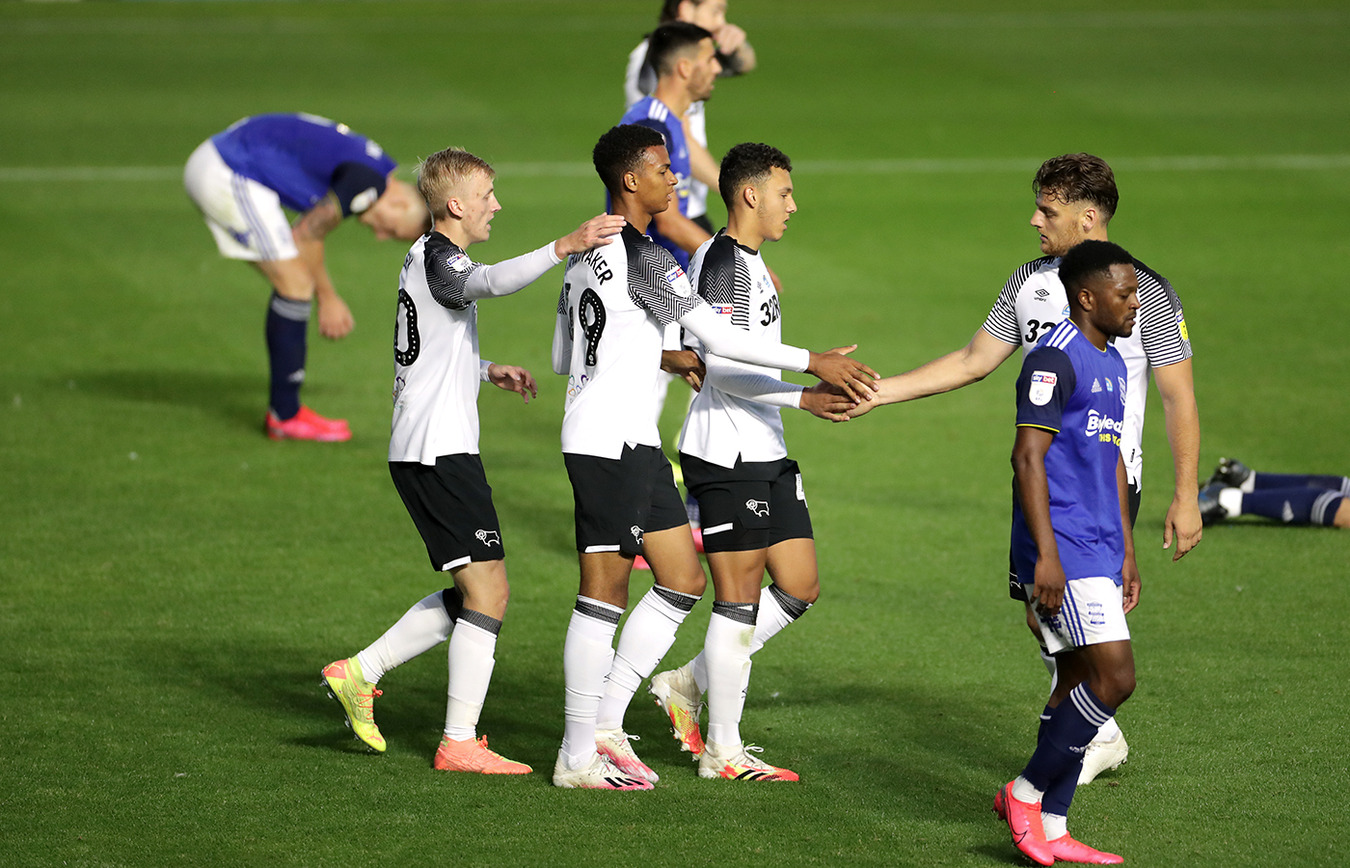 Whittaker Named In EFL Team Of The Week

EFL TEAM OF THE WEEK Sibley Happy To Cap Off Season With Goal And Win Whittaker: "I Couldn't Be More Delighted" Birmingham City Vs Derby County: Watch All The Action ONLY On RamsTV TONIGHT Cocu: “We Owe It To Ourselves And Our Fans To Give Our Absolute Best” Roos: “It’s Massive To Try And End The Season With A Win” Birmingham City Vs Derby County: Watch All The Action ONLY On RamsTV

Birmingham City Vs Derby County: Watch From Home On RamsTV

It was a night to remember for Academy graduate Morgan Whittaker who scored his first professional goal for Derby County in a 3-1 win against Birmingham City.

Graeme Shinnie put the Rams ahead on six minutes as he swept home from inside the box following Chris Martin’s cross, netting his second goal of the season.

However, 10 minutes into the second half Ivan Sunjic equalised for Blues after Derby failed to clear the ball out of their box.

But the night ended on a positive note as with only three minutes remaining, Whittaker headed his first senior goal to put the Rams ahead on the night.

And a perfect end to the season followed as substitute Louie Sibley scored a wonderful goal from 20 yards to earn all three points.

Manager Phillip Cocu made three changes to Sunday’s defeat against Leeds United as Max Bird lined up in a more unfamiliar role of central defence, whilst Lee Buchanan earned his first start since the game against Brentford in August 2019.

And it was the defence who needed to be wary early on as Birmingham’s pacey attackers put the Rams back line under pressure.

Jeremie Bela fired wide from the edge of the box when he really should have hit the target on five minutes, and they were made to pay for that missed chance as Derby took the lead a minute later.

A ball forward saw Martyn Waghorn and Chris Martin combine, the latter crossed for an onrushing Shinnie who found the bottom corner with his weaker right foot to net his second goal of the campaign.

It was also his second with his right foot this season, however, following the goal, Derby had to soak up pressure from a Birmingham City side who still had relegation fears of their own.

The Rams were forced into an early change following an innocuous challenge on Kelle Roos. Lucas Jutkiewicz caught the goalkeeper on his head as he raced after a loose ball and after lengthy treatment, he had to be replaced by Ben Hamer.

It is the first time Derby have used a substitute goalkeeper in the league since 2013 as Adam Legzdins replaced Frank Fielding against Portsmouth at Fratton Park.

The impressive Jude Bellingham, who signed a pre-contract agreement with German giants Borussia Dortmund during the week, started to have more of an influence on the game as the half progressed.

On a mission to end his spell with the Blues with a goal, he forced Hamer into two smart stops midway through the half, before heading against the crossbar from eight yards out. 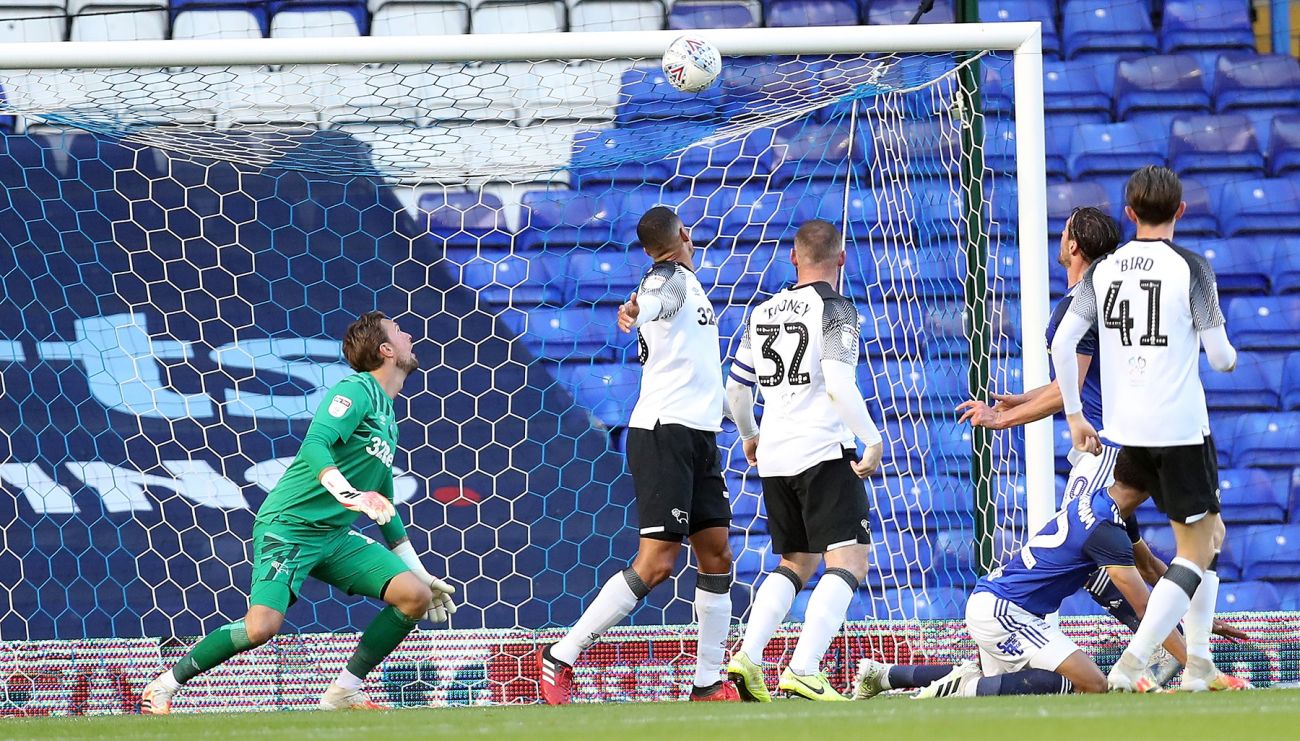 It was the closest Birmingham came to drawing level as Derby changed personnel at the back and took a bit more control on proceedings.

And Cocu’s side had two golden opportunities to extend their lead before the half time whistle.

First Jason Knight was denied from close by Lee Camp’s strong arm and deep into first half injury time, the Irishman found Martyn Waghorn racing through on goal, but his lofted effort fell on top of the crossbar. 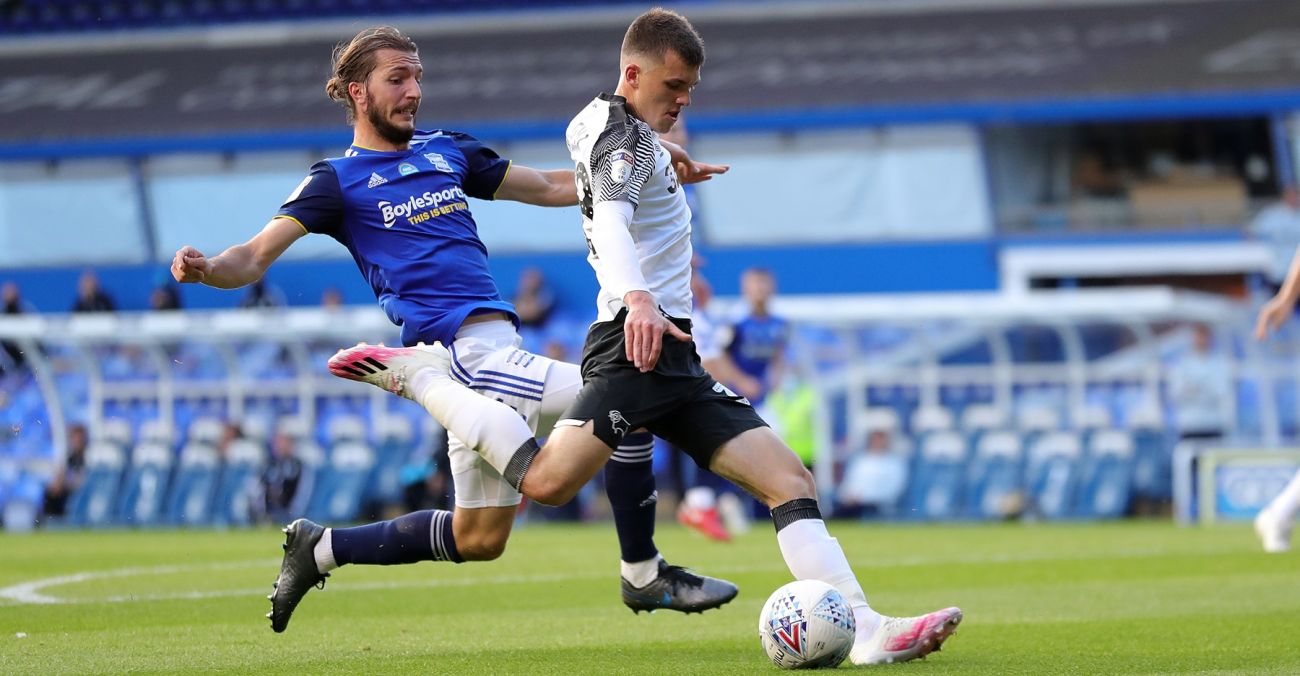 The Rams would rue that missed opportunity as Birmingham equalised 10 minutes into the second half through Sunjic.

The midfielder, who scored in the reverse fixture at Pride Park Stadium back in September, capitalised on a mistake in the Derby County defence and fired past Hamer to draw Blues level.

Cocu made a triple change just after the hour mark in a bid to regain the lead with George Evans, Sibley and Whittaker introduced.

Wayne Rooney, who was replaced, handed the captaincy to Academy graduate Max Bird who skippered the Rams for only the second time.

For large parts of the second half, the game was played in the Derby County half but the Rams stood resolutely.

Curtis Davies was unbeatable in the air, whilst Matt Clarke continued to shine at the back as the game started to peter out.

However, with only three minutes of the game remaining, Derby County grabbed the winning goal as substitute Whittaker netted his first professional goal.

Fellow substitute Jack Marriott won the ball in the corner, knocked the ball back to Whittaker who had his initial shot saved but he headed home to make it a memorable end to the season for the youngster.

And in the first minute of additional time, Sibley continued his impressive progression, scoring his fifth goal of the season from outside the box to make it 3-1.

It was a fitting way to end the season for the Rams as two Academy graduates netted late goals to earn all three points at St Andrews.