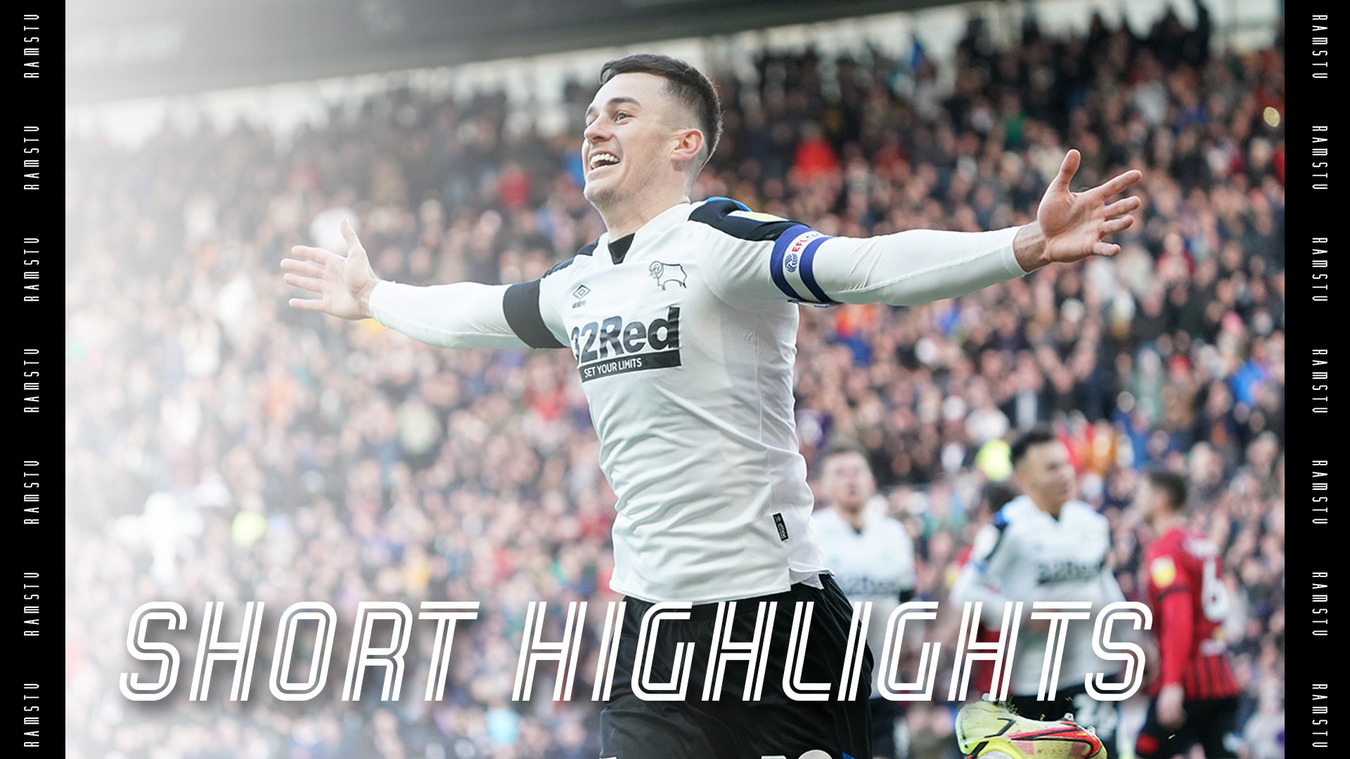 Rooney: “I Always Believed We Would Get Three Points” Rooney: “We Are Good Enough To Compete With Anyone In This League” Lawrence: "We Need To Keep The Club Smiling" Ward The Man In The Middle For Derby's Meeting With Bournemouth Tickets On Sale For Derby's Next Home Fixture Against AFC Bournemouth Derby County earned a crucial three points at Pride Park Stadium as they beat high-flying AFC Bournemouth 3-2 in a pulsating encounter to move out of negative points and back to zero. 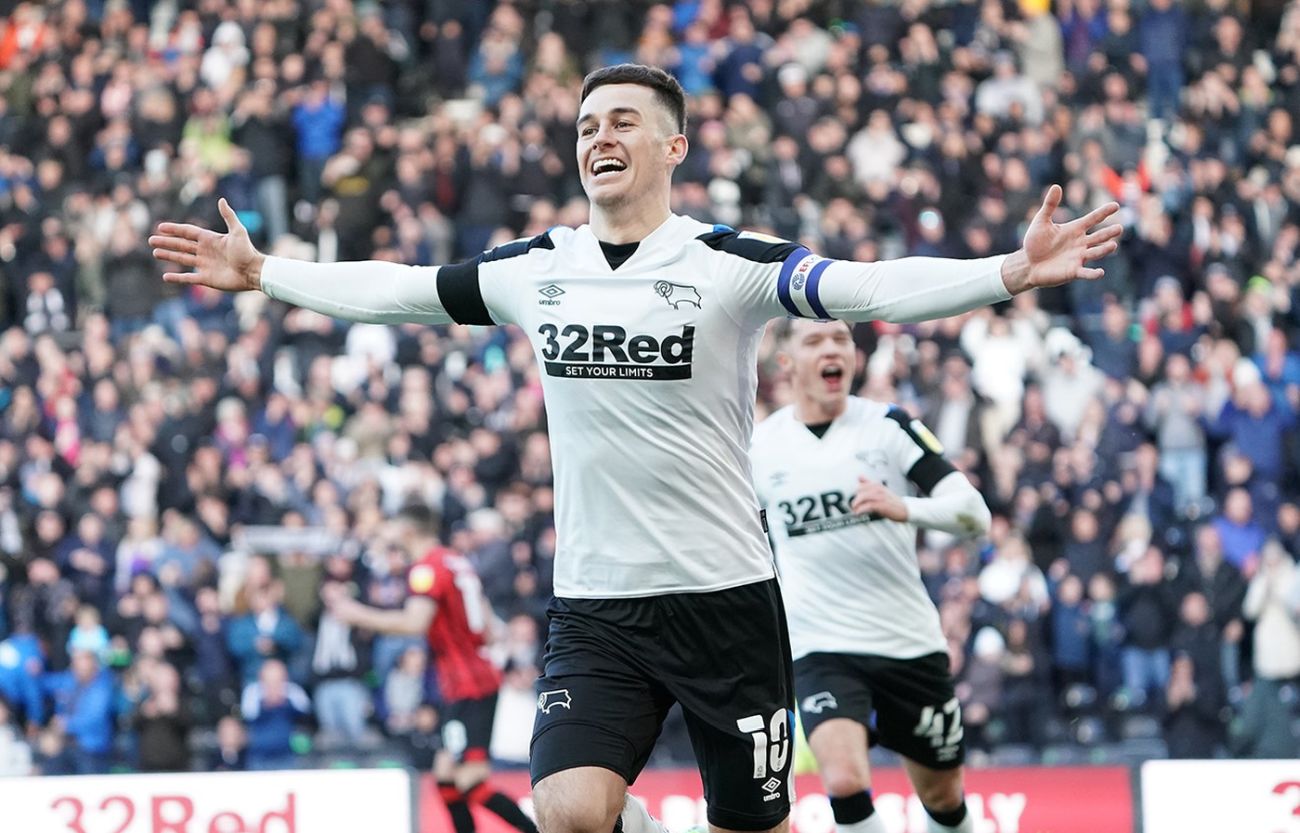 The Rams showed fight and determination all afternoon as they came from behind to secure the valuable victory in front of a passionate Pride Park crowd.

Derby started well and took the lead on 13 minutes as Jason Knight headed his second goal of the campaign, however, the Cherries turned the game on its head before half time.

Jaidon Anthony and Dominic Solanke scored the goals as Scott Parker’s side led at the break, but Derby came out with extra motivation in the second half as they battled back. 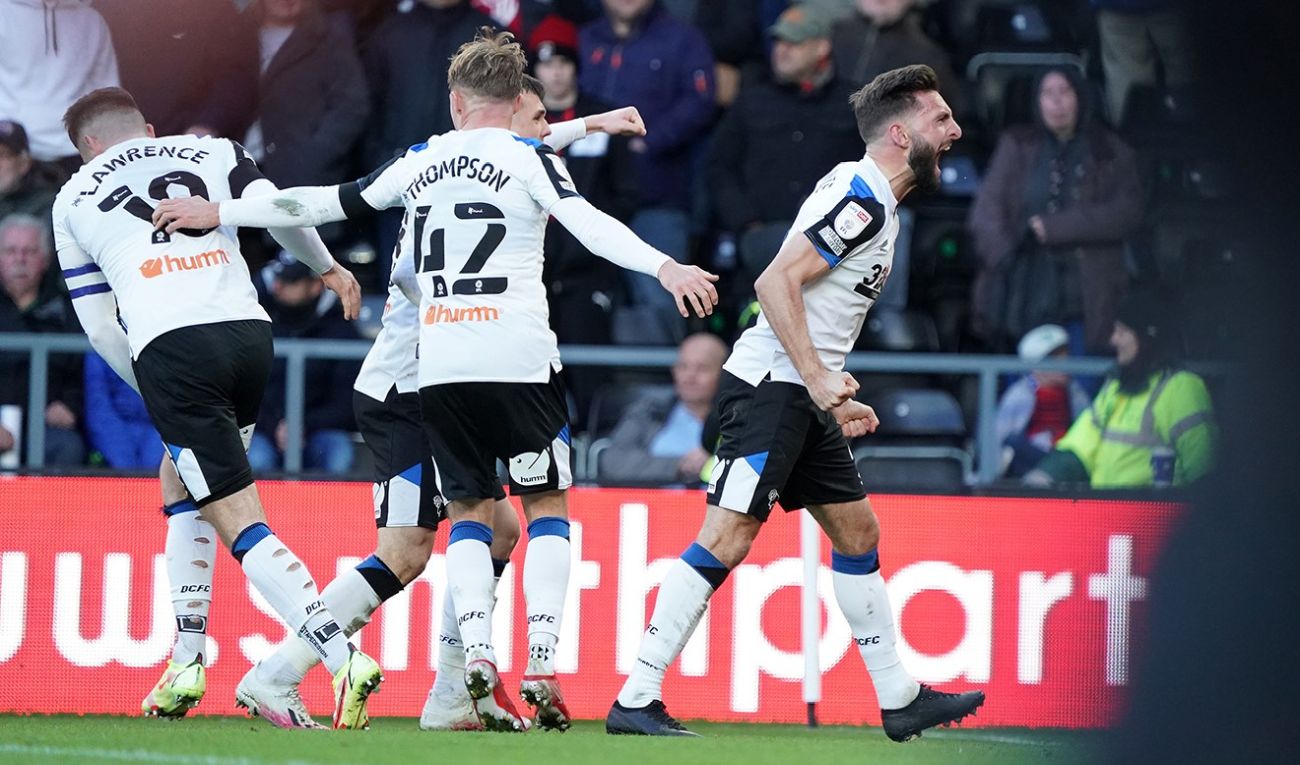 Tom Lawrence curled into the corner to level the scoreline as the volume inside the stadium cranked up a notch, and with the Rams in the ascendency, they found the winner from the penalty spot.

Graeme Shinnie was fouled inside the penalty area and skipper Lawrence stepped up and kept his nerve to score past Mark Travers in the Cherries goal to win the game for the Rams.

Manager Wayne Rooney handed a debut to Academy graduate Liam Thompson as he replaced Nathan Byrne who missed out through suspension after his dismissal against Millwall two weeks ago. 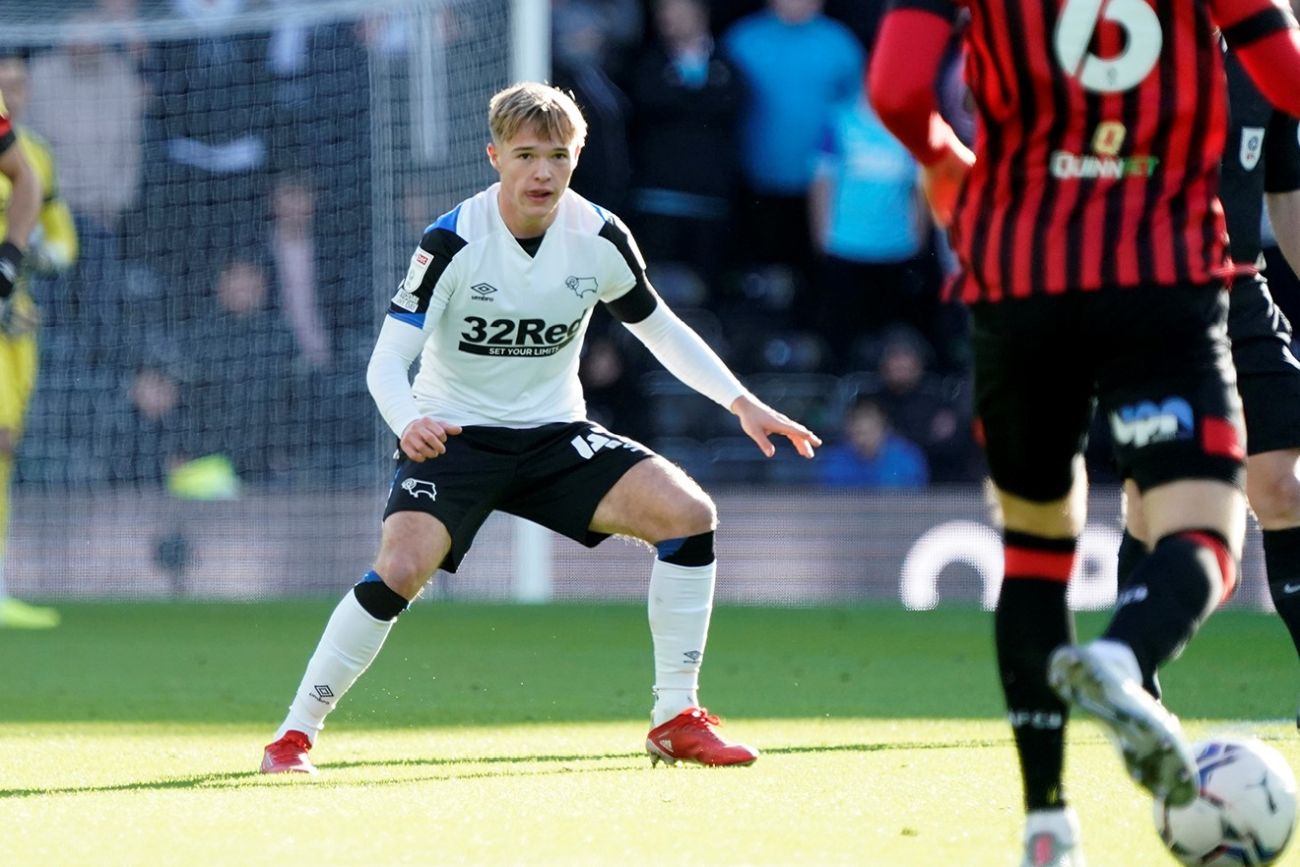 The Rams started the game on the front foot, pressuring their opponents from the first minute as they went in search of an early opener.

They almost found it on 13 minutes as Lee Buchanan dug out a cross for Knight to hit but his effort deflected for a corner. From the set-piece, Derby took the lead.

Max Bird’s inch-perfect cross found the head of Knight, who found himself all alone in the six yard box, and he guided past Mark Travers in the AFC Bournemouth goal to score his second goal of the season and give the Rams the perfect start. 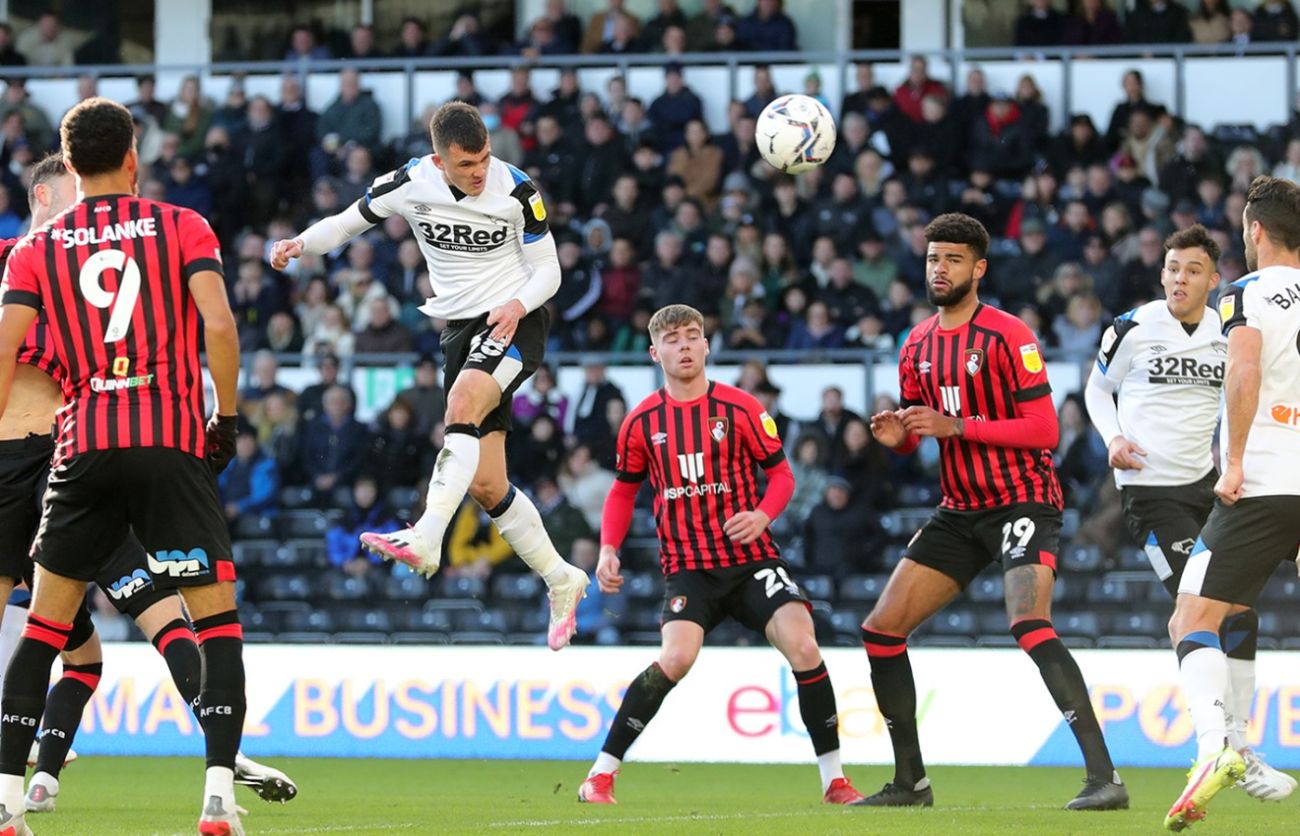 However, they would be pegged back within five minutes as Scott Parker’s side equalised. The Cherries capitalised on an error in the Derby County defence and took advantage as Anthony levelled.

Rooney was forced into an early change as Sam Baldock limped off with an injury and was replaced by Colin Kazim-Richards.

The Rams’ effort and desire could not be questioned as they chased every ball and pressed in numbers, however, AFC Bournemouth were just starting to turn the screw. 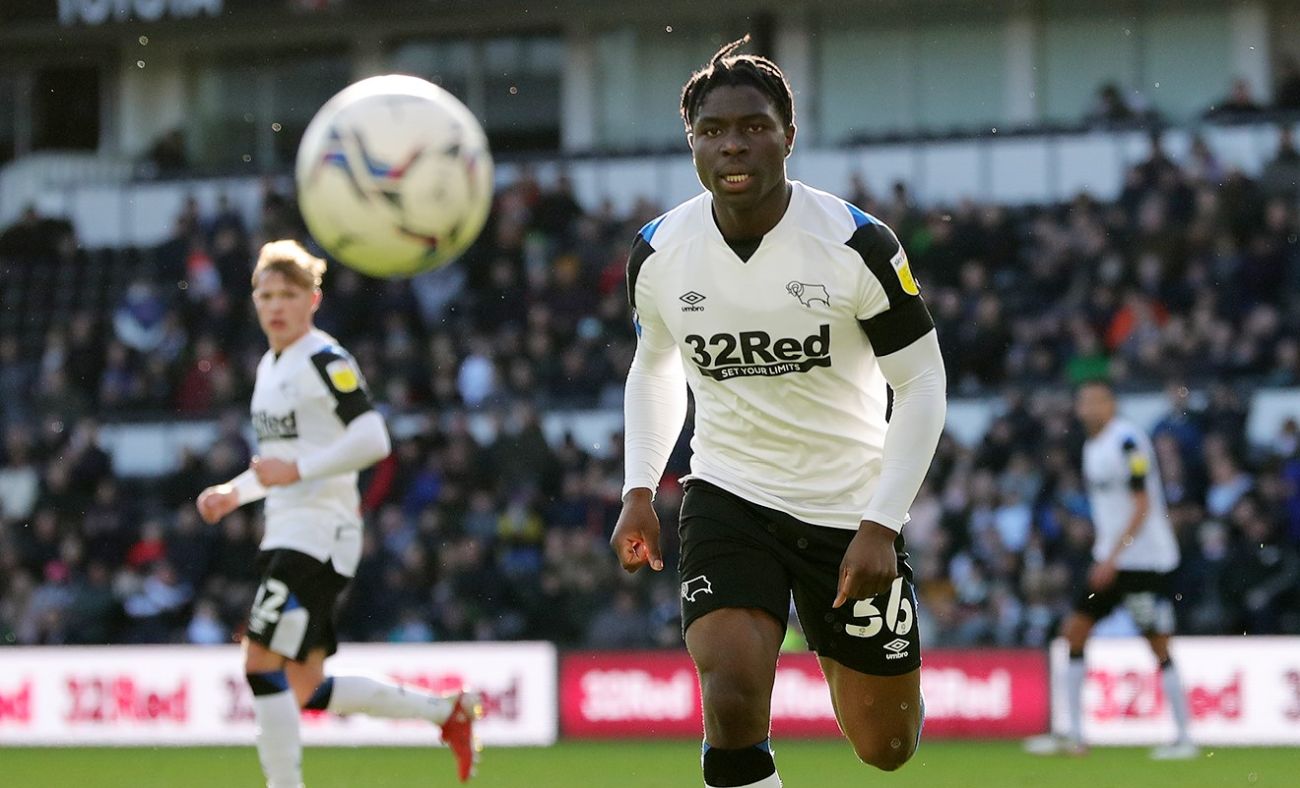 Solanke was saw an effort rise over the crossbar, whilst Kelle Roos was out quickly to smoother at the feet of the forward after a cross into the box.

And he would eventually find his goal on 38 minutes as the visitors took the lead at Pride Park. A strong run from Lewis Cook saw him find Billing who laid the ball into the path of Solanke and he made no mistake from 12 yards.

Both sides had chances before the half time interval. Jefferson Lerma almost extended the visitors lead but headed wide from six yards, but Graeme Shinnie almost found an equaliser for the Rams before the break. 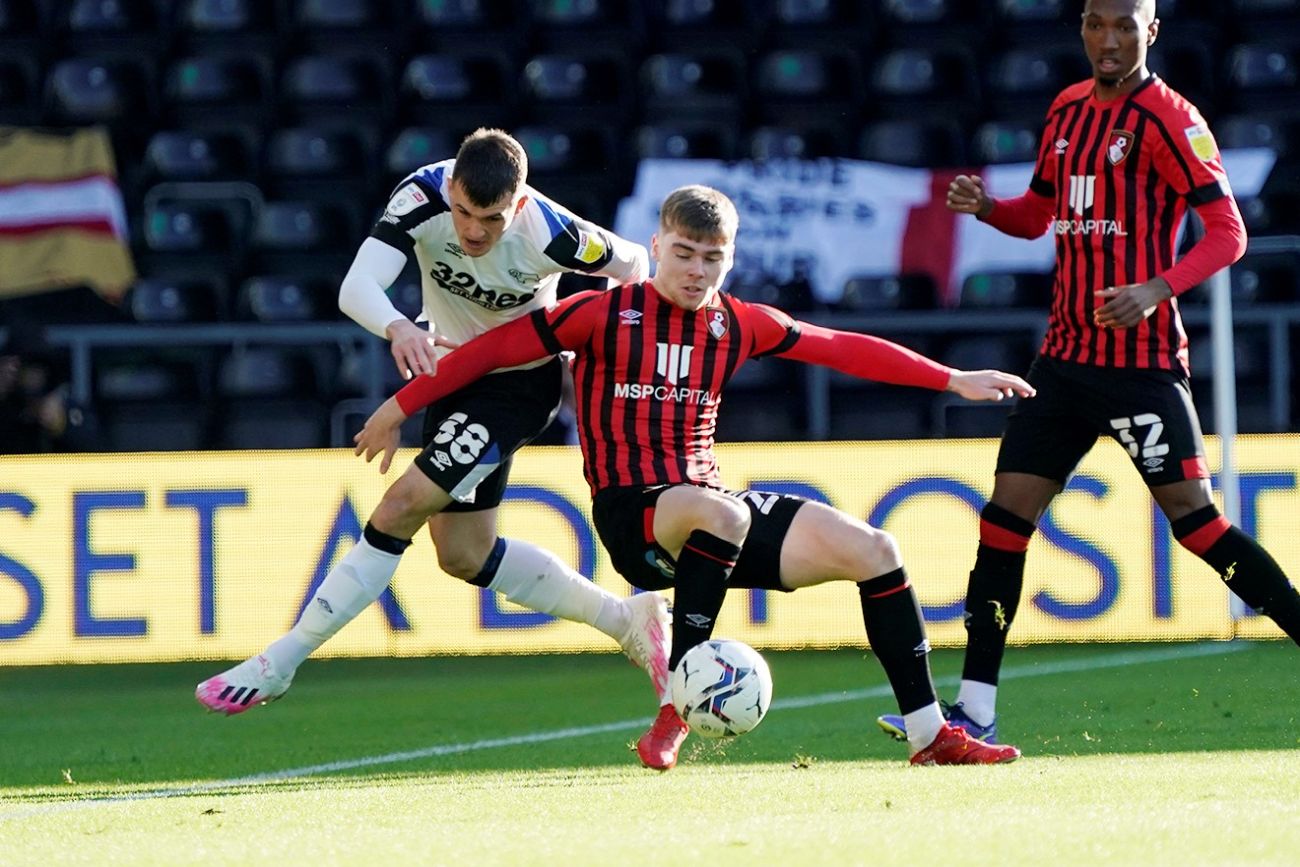 It all came from good work from Festy Ebosele who chased down a lost ball and regained possession in a good area. He advanced towards the penalty box, crossed to the back post for Tom Lawrence who headed into the path of the Scottish midfielder but his strike went over the crossbar.

And the Rams would take that momentum from the end of the first half into the second as they continued to show tremendous effort and courage to get their way back into the game.

With Rooney’s words ringing in their ears, the Rams fought back into the game an equalised on the hour mark through Lawrence’s fine finish. 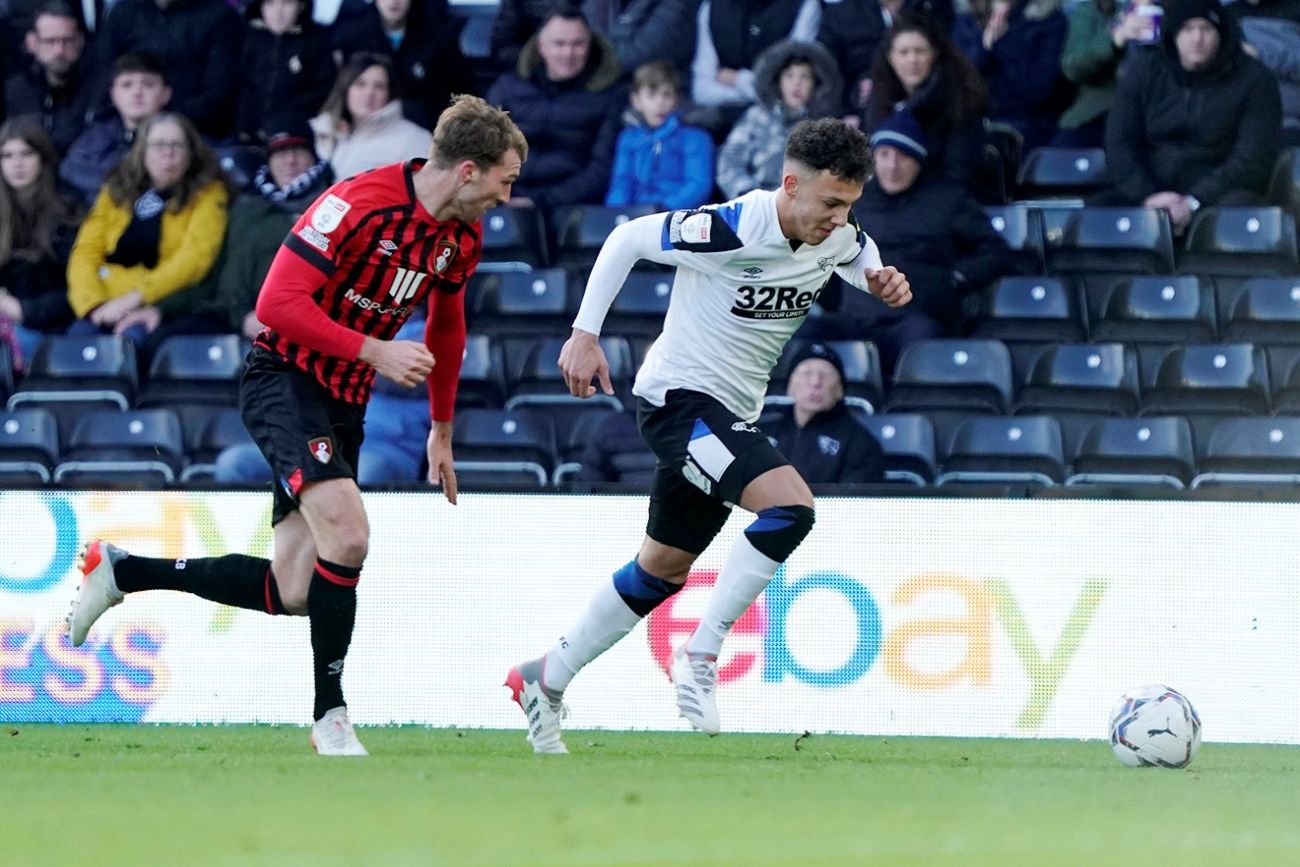 It was all from good pressing play from Derby who forced AFC Bournemouth to concede possession on the edge of their own area. Shinnie headed to Kazim-Richards who found Lawrence. He had work to do but with two men around him, he managed to find a shooting path and curled into the corner to draw the Rams level.

With their tales up, and with the huge roar from the supporters, Derby went in search of the next goal, and they were presented with a golden opportunity to retake the lead from the penalty spot. 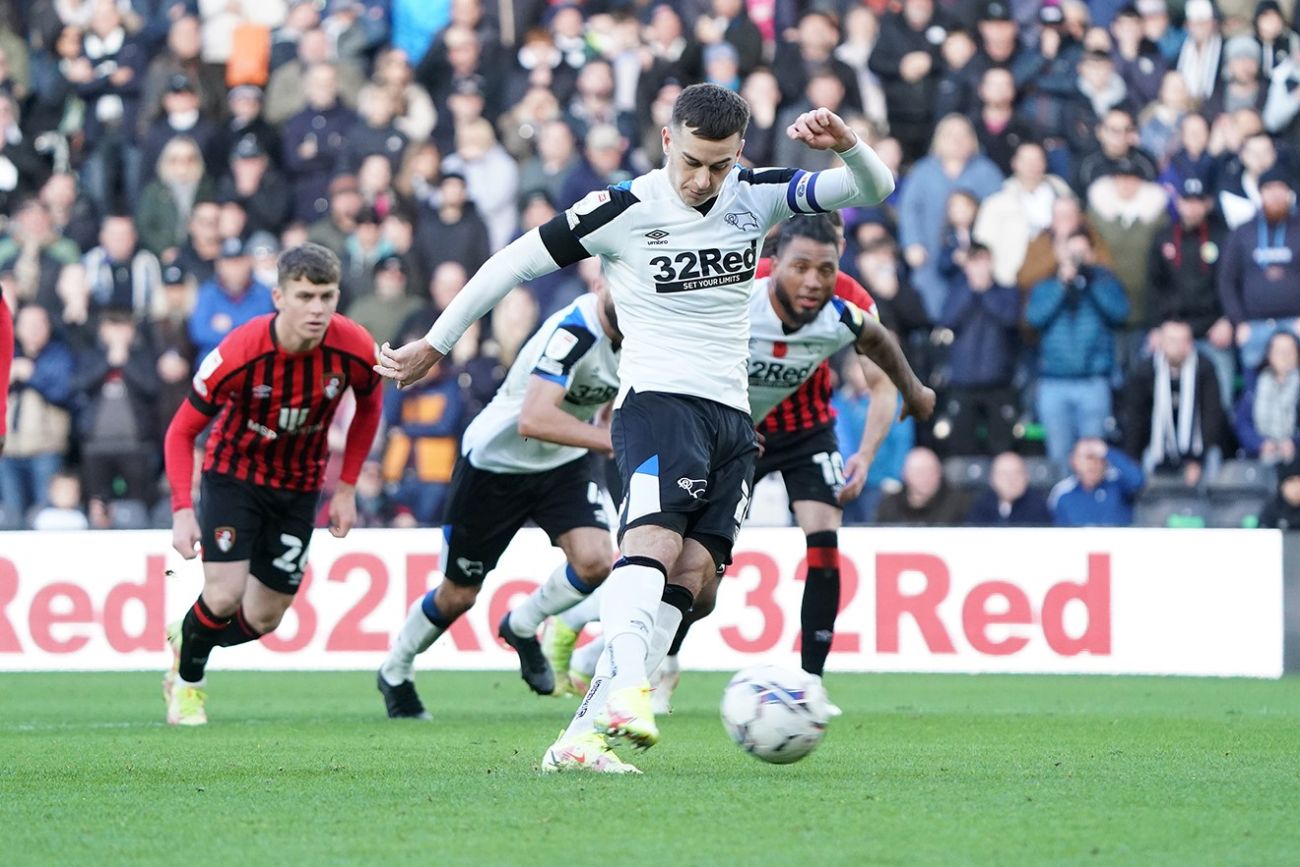 Good work from Buchanan on the left found the overlapping Shinnie who had advanced into the penalty box and he was fouled by Cherries full back Jack Stacey.The referee had no hesitation in pointing to the spot.

Skipper Lawrence grabbed the ball and fired down the middle to score his second goal of the game and his fourth of the season to put the Rams back ahead in the encounter.

The players were giving everything to the cause and almost found a fourth on 77 minutes as Lawrence danced his way into the penalty area and crossed for Kazim-Richards but his header went wide of the post. 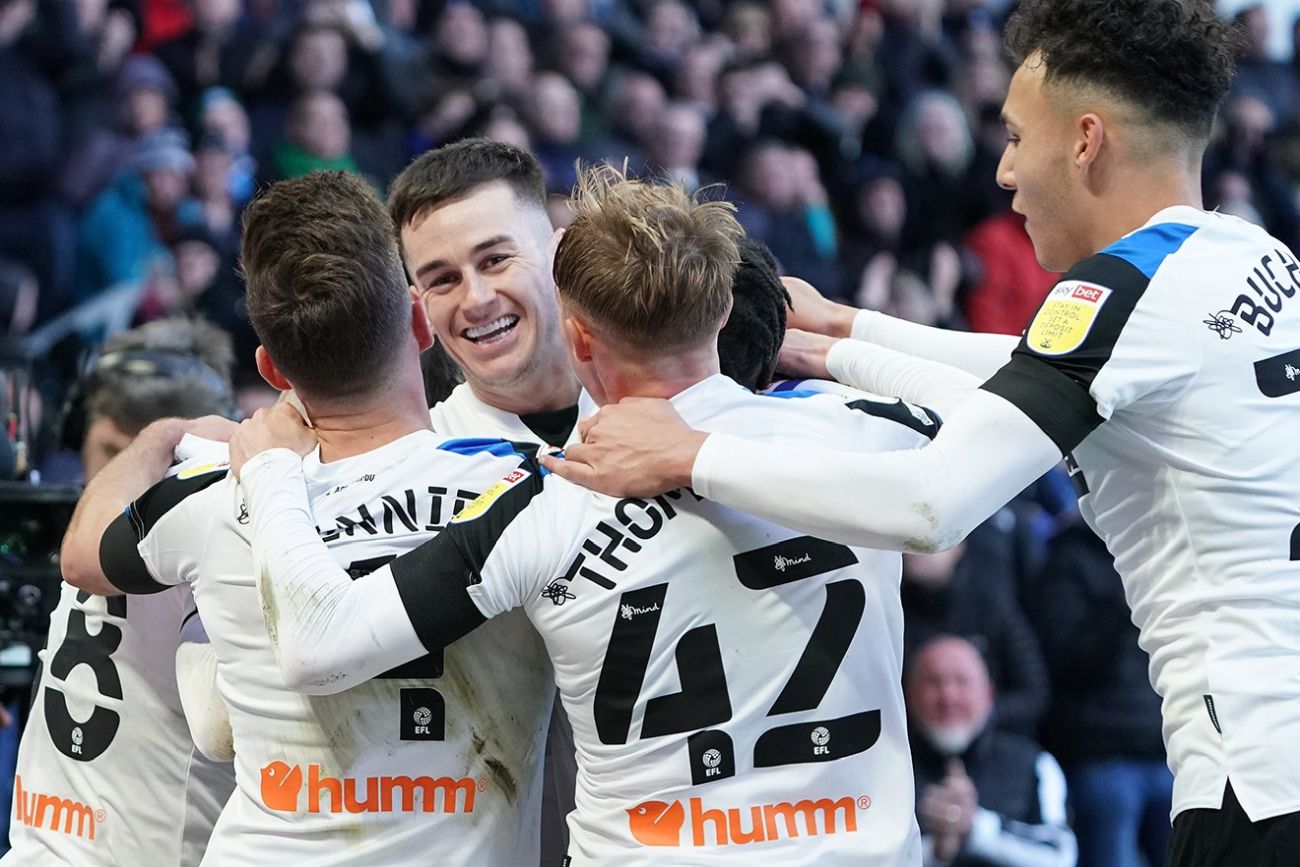 The Rams’ skipper was clearly full of confidence and nearly scored his hat-trick in spectacular style as he tried an audacious effort from 40 yards but the ball just did not dip enough and narrowly went over the crossbar.

It made for a nervy ending as Solanke went close, whilst Phil Billing headed wide at the back post. Gavin Kilkenny also forced a save from Roos.

Despite the obvious nerves from the crowd, the Rams’ squad played the game out professionally and registered all three points on a dramatic afternoon in the East Midlands.