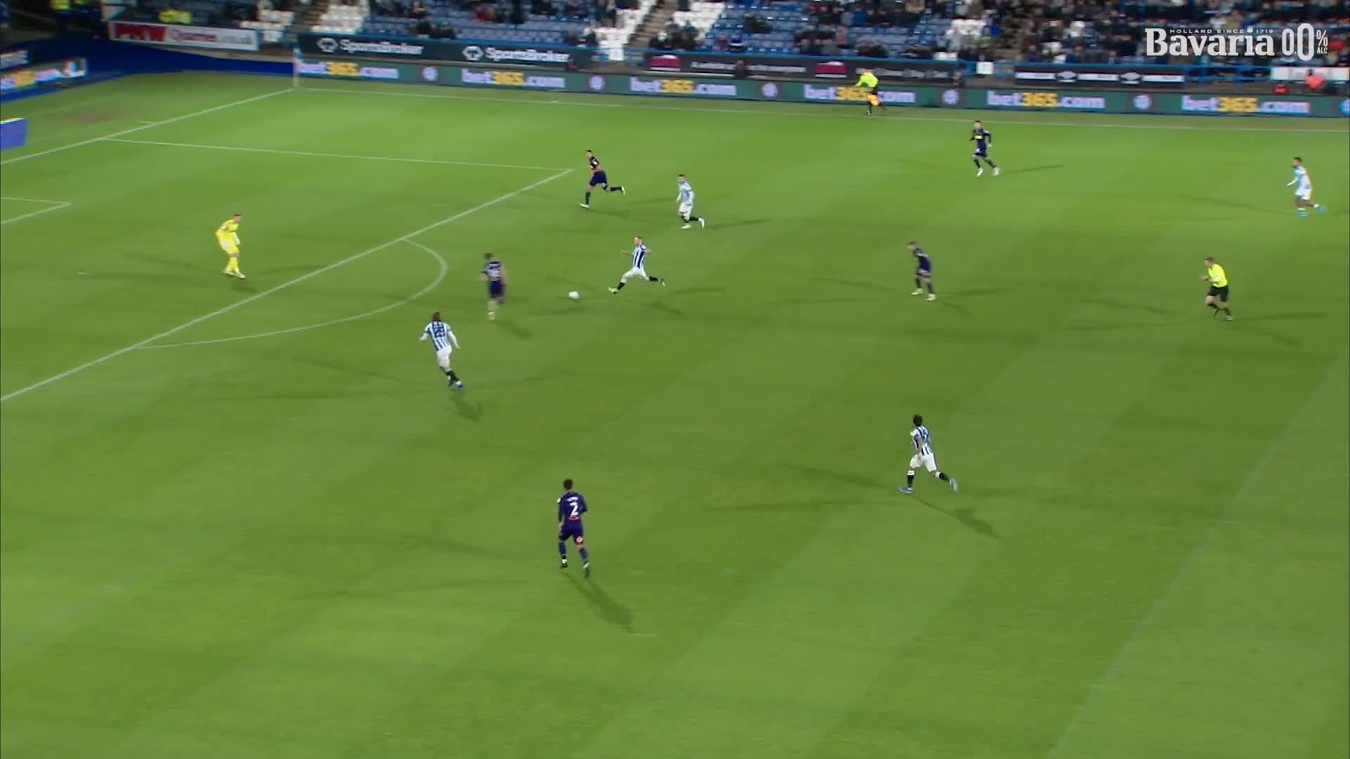 Rooney: “The Lads Are Giving Me So Much Hope” Knight: “We Put In A Real Shift Out There” Knight Looks Back On Huddersfield Defeat Rooney: “I Have Belief In This Team” Allsop: “The Support We Get Doesn’t Go Unnoticed” Ten-man Derby County fought bravely for 75 minutes before conceding twice as they fell to a 2-0 defeat against Huddersfield Town at the John Smith’s Stadium. 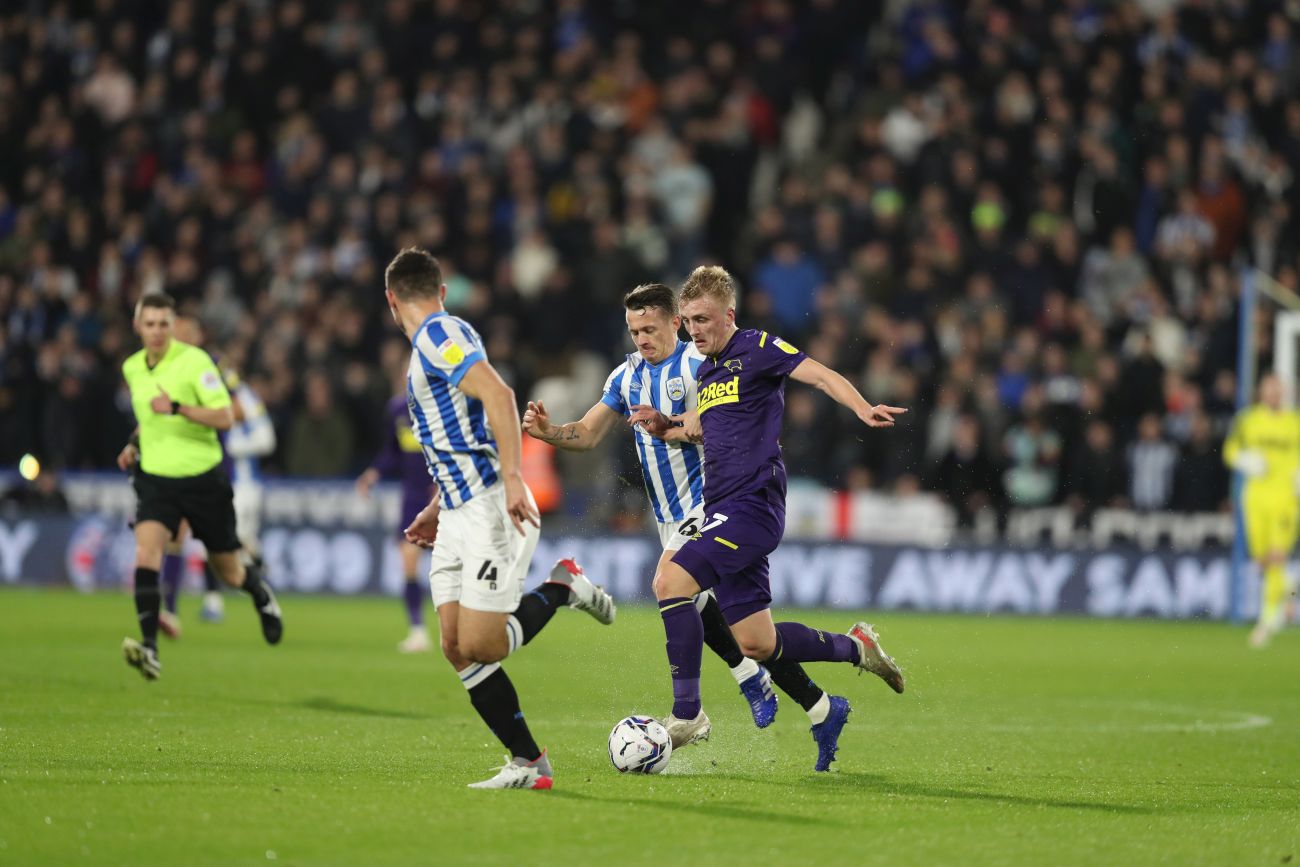 Richard Stearman was dismissed after three minutes which put the Rams on the backfoot from the off. But, Derby dug in and frustrated their opponents for more than an hour as they looked to gain a positive result from the game.

But, a deflected looping effort was Derby’s undoing on 75 minutes as Duane Holmes netted against his former club, whilst three minutes later, Jordan Rhodes put the game to bed as he converted from close range as the Rams left West Yorkshire pointless. Manager Wayne Rooney made three changes to the side which drew with Birmingham City on Sunday as Louie Sibley, Festy Ebosele and Lee Buchanan returned to the starting line-up.

But the Rams were dealt an early blow as they were reduced to 10-men in the third minute of the game.

A loose pass deep in Derby territory saw Richard Stearman produce a strong challenge on Huddersfield midfielder Lewis O’Brien. The referee felt the defender’s tackle was used with excessive force and sent Stearman off against his former club. 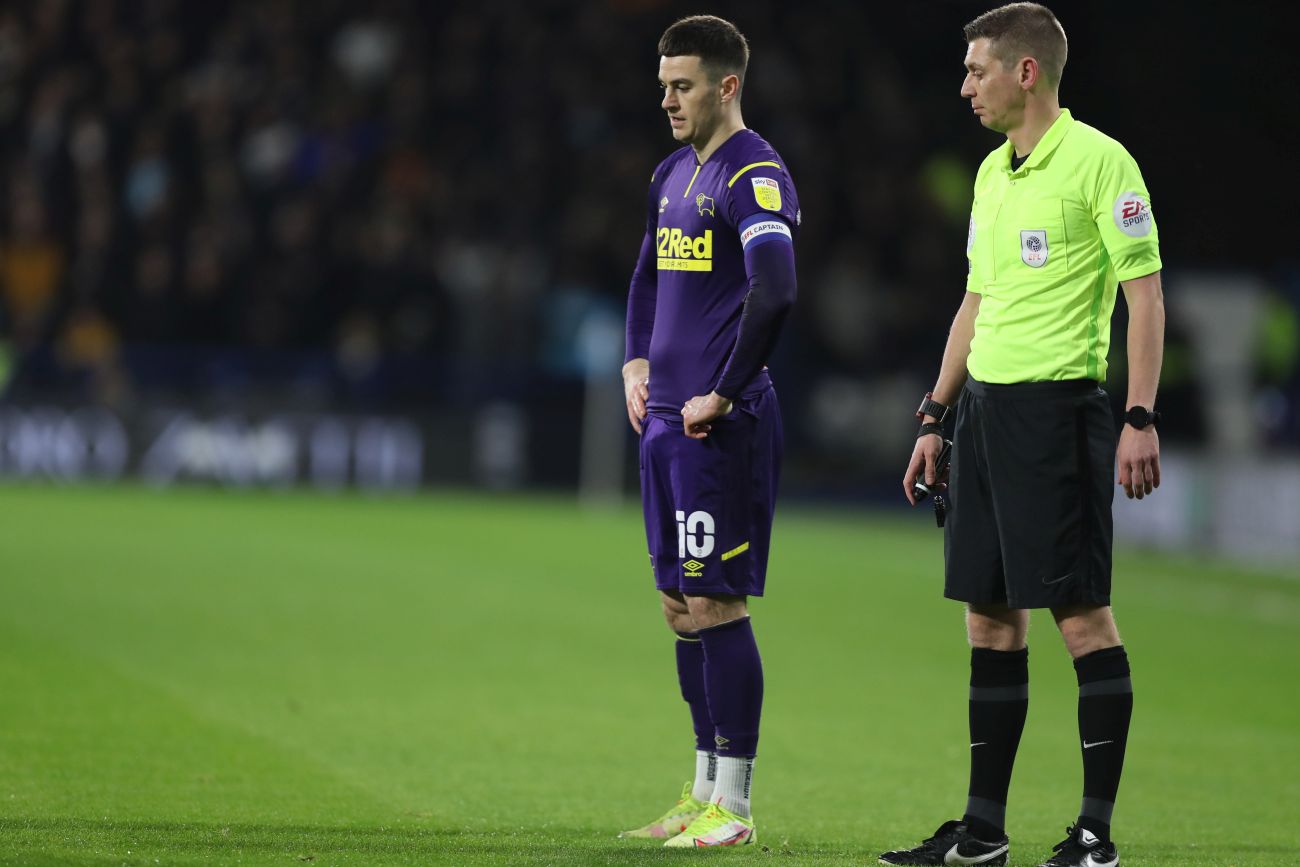 It gave Derby a mountain to climb, and they had to withstand pressure from the hosts who took the game to the Rams.

Sorba Thomas saw the resultant free kick deflect wide for a corner, whilst O’Brien, who recovered from his earlier knock, was denied by Rams goalkeeper Ryan Allsop who made a smart stop.

Soon after, Danny Ward fired wide from close range from a deep cross into the box, whilst former Ram Holmes twice went close. 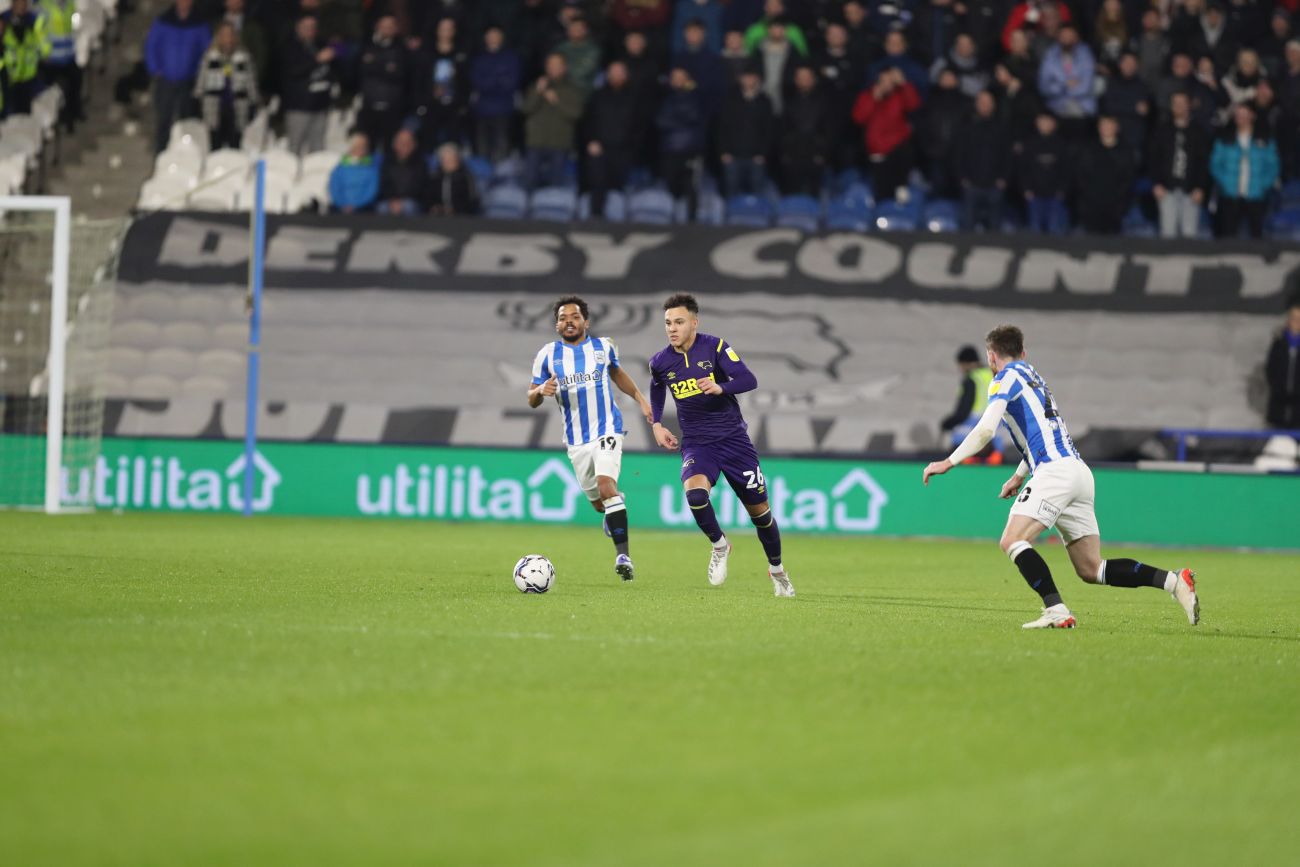 He created space for himself on the edge of the box but fired over, whilst moments later, he found himself free in the area. He managed to get a shot away but Curtis Davies blocked his effort.

After that early onslaught, Derby started to settle into the half. With Rooney able to get messages on to the players, the Rams started to force their hosts back. 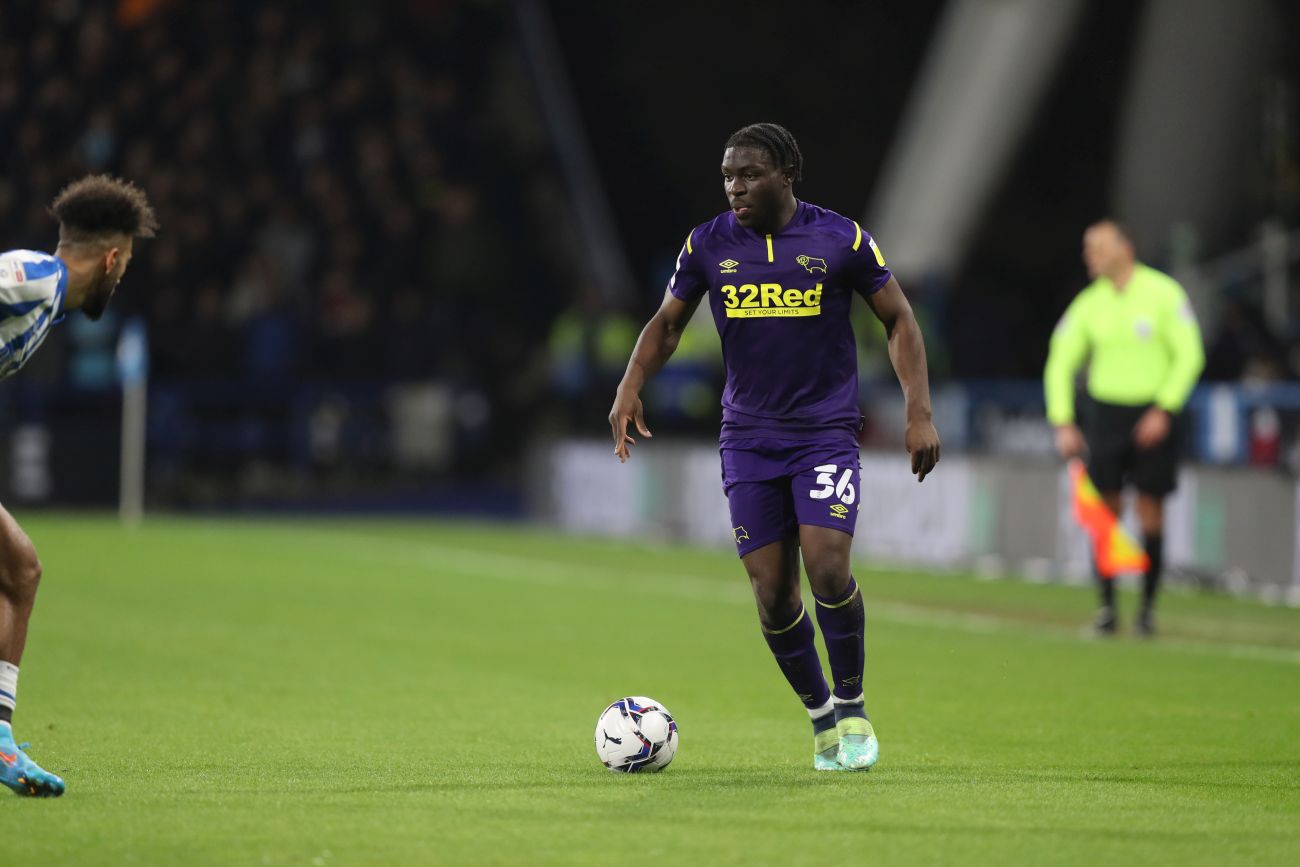 Huddersfield still enjoyed a lot of possession, but the Rams were holding their own. On the half hour mark, Tom Lees headed wide from a dangerous corner into the box, but shortly after came Derby’s best chance of the half.

On the counter attack, Tom Lawrence managed to beat his man before finding Louie Sibley on the right-hand side. The midfielder took a touch, worked himself a bit of space, and aimed for the bottom corner but he dragged his effort wide. 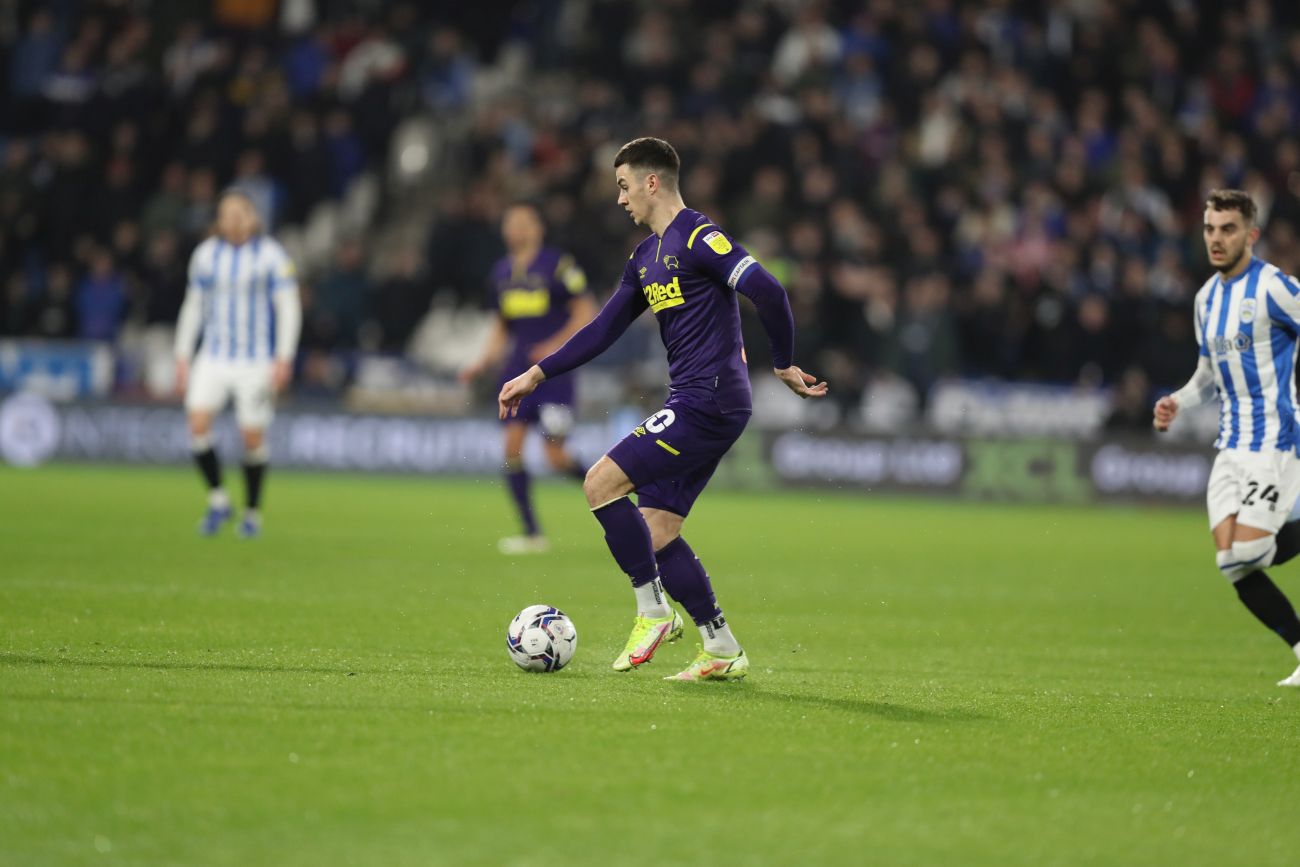 The Rams continued to dig in and frustrate their opponents, with the home fans becoming increasingly agitated with their team’s performance.

But they did almost take the lead with five minutes of the half remaining. It was good football, too. Harry Toffolo advanced into the penalty area and fired a pass into O’Brien. The midfielder turned the ball around the corner for Holmes who shot first time but Allsop tipped his effort around the post.

Both sides made a change at the break as Rooney introduced Krystian Bielik, who returned on Sunday following a one-year lay off with the equaliser goal against Blues. He shook off a shoulder injury and was straight into the action as the Rams continued to frustrate their opponents early in the second half.

The Derby fans were in fine voice all evening and they were willing their side on, so much so, the Rams almost broke the deadlock. Sibley latched on to a long hopeful punt forward but his touch just eluded him and the goalkeeper was out to smother. It was a golden opportunity for the Rams who were doing their best to slow the game down at any opportunity to maintain some energy for the final embers of the game.

Huddersfield did up the ante slightly as O’Brien fired an effort wide on 72 minutes, whilst they brought on Rhodes to boost their attacking options.

And they did manage to get the opening goal of the game with 15 minutes remaining through a fortunate effort converted by Holmes. The midfielder lined up a shot which deflected up and deceived Allsop to put the Terriers ahead. 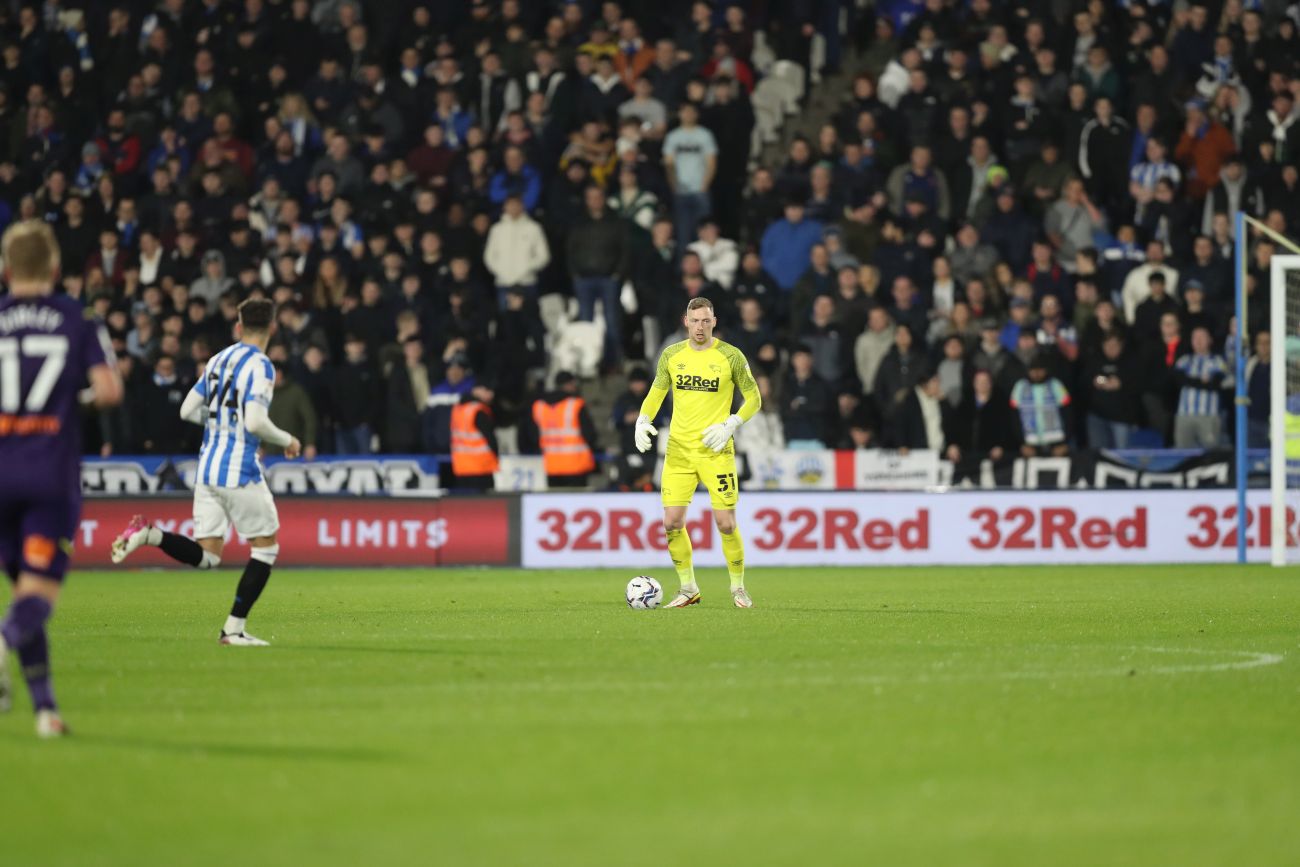 Three minutes later, Huddersfield had their second as Ward’s initial effort from 20 yards was parried by Allsop and the ball landed at the feet of Rhodes who made no mistake from close range to double the Terriers tally for the night.

The Rams continued to push until the end with Ebosele still able to cause problems with his pace, but it just wasn’t to be for the Rams who suffered defeat on the road.