Derby County are back at Pride Park on Saturday afternoon, as they face Hull City in the Sky Bet Championship.

Frank Lampard's side will be looking to make it five games unbeaten in all competitions and here, dcfc.co.uk will give you all the information that you need ahead of the clash with Nigel Adkins' in-form side.

Jayden Bogle will be available for selection against Hull City after serving a one-match ban against Preston North End for the red card he received against Accrington Stanley.

Despite being ahead of schedule in his recovery, Mason Mount will not be ready for this weekend’s clash nor will Jack Marriott who has been kept out of action with a foot injury.

Speaking to RamsTV, Lampard said: “It does feel a long time because we played Reading but before that we were on the road a lot so it will be nice to be at home.

“We do have some home games coming up in the running and it starts with Hull who are in fantastic form, we know that.

“They have climbed up the table at a canter with lots of wins on the trot, then they lost, but then they won against last week against Stoke so we know it’s a tough game for us.

“They have real threats going forward and Bowen is scoring a lot of goals. Their wingers are dangerous and are scoring and assisting so we know where their threats come from so we will have to be at our best.”

There is still time to secure your seat at Pride Park Stadium on Saturday afternoon.

The cheapest way to catch the action is by buying tickets before the day of the game. 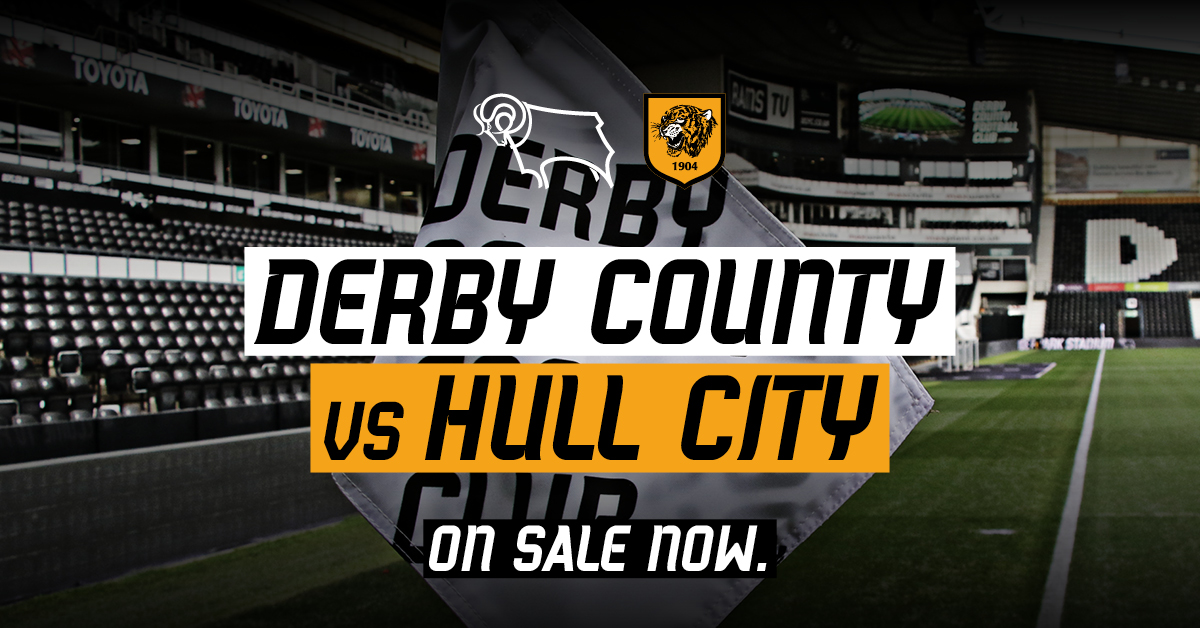 Pay on the day tickets have been confirmed at the following prices:

*Above prices based on Category D & E seating.

The Ram sat down for an exclusive interview with new signing Ashley Cole ahead of the clash at Pride Park Stadium.

Spanning six pages, we spoke to the defender about how he is settling in with the Rams, making his England debut on English soil at Pride Park Stadium and his hope to pass on his knowledge to the young players in the squad.

For the second time in five days, Derby picked up a win over Hull at KCOM Stadium following up their 4-0 victory in the Carabao Cup with a 2-1 victory in their Sky Bet Championship meeting.

Martyn Waghorn and Florian Jozefzoon both got on the scoresheet again to back up their first goals for the Rams the game before against the same opponents.

Waghorn struck first when he coolly slotted in from the penalty spot after David Nugent was brought down by Jordy de Wijs.

Todd Kane equalised for the Tigers against the run of play, but with just two minutes left Jozefzoon found the winner with a deflected shot past David Marshall to secure a deserved three points for the Rams.

Gavin Ward will be the man in the middle on Saturday afternoon at Pride Park Stadium. So far this season he has produced 81 yellow cards and one straight red card in the 25 games he has officiated.

He has refereed one fixture involving the Rams already this season, a 1-0 win away at Wigan Athletic.

Ward will be assisted by Nick Greenhalgh and John Flynn on the lines, whilst Stephen Martin has been appointed as the fourth official.

As always, RamsTV’s content building up to the match is FREE to watch in the UK and across the globe on dcfc.co.uk, the DCFC App and on Derby County’s official YouTube channel.

Supporters based outside of the UK & Ireland will then be able to watch every kick of the game (kick-off 3pm) for a one-off pay-per-view payment, or as part of their monthly RamsTV subscription. UK-based fans will be able to access a live audio stream of the game.

Full streaming options for Saturday’s game can be found here.

Once again, all of RamsTV’s post-match content will be free to view across the club’s digital channels and includes exclusive interviews with Frank Lampard and his players, as well as comprehensive highlights packages.