Derby County will look to book their spot in the Sky Bet Championship Play-Offs when they take on West Bromwich Albion on the final day of the season, kick-off: 12.30pm.

With the fate in the Rams’ hands, a win will ensure Frank Lampard’s side finish in sixth to extend their season. Here, dcfc.co.uk has gathered all the information you will need ahead of the clash with James Shan’s side.

Defender Richard Keogh is a doubt for the final game of the season after leaving the game against Swansea City early with a small groin issue.

There are no other new injury concerns for Lampard.

Speaking to RamsTV, Lampard said:"We know there are different permutations but winning is the one we are focused on.

"We have to train and prepare right for it, be focused mentally about the game for 90 minutes against a very good team who will be pushing.

"They are not a team who are relegated or promoted and it is done, they are a team who are wanting to stay on top for the play-off game they will have the following week.

"We have got very tough opposition but we know what we have got to do."

It is set to be a brilliant afternoon at Pride Park with more that 30,000 tickets sold to watch the Rams take on the Baggies. 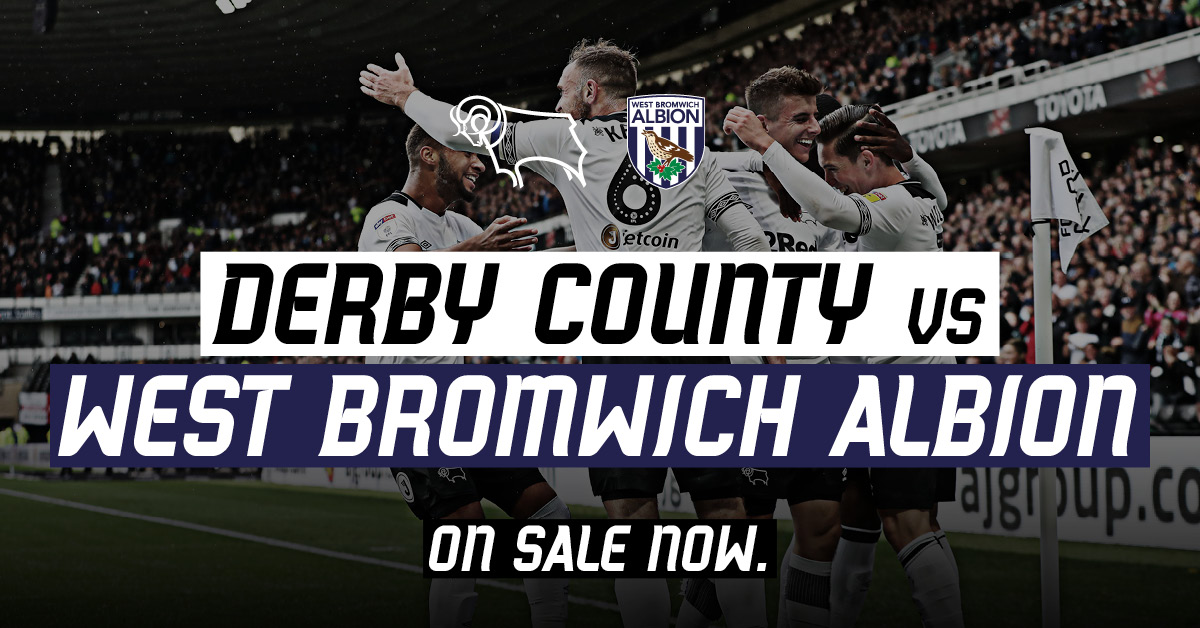 There is still time to secure your seat and matchday prices have been confirmed.

Tickets are on sale from the following prices *:

Derby County players and coaching staff would like to show their appreciation of the supporters following the game at Pride Park.

In order for this to happen safely, fans are reminded that anyone who encroaches on the pitch risk facing a banning order as well as a criminal conviction, while the club they support could also face a fine.

Supporters are advised to enjoy the occasion but be wary of the potential repercussions for entering the field of play.

Please note that the footbridge that links the residential area of Chaddesden to the Wyven and Pride Park will be closed to the public on Sunday as part of the A25 Wyvern Improvement Scheme.

Derby City Council have put in place a diversion with pedestrians and cyclists able to us the Highfield Lane footbridge to cross the A52.

The pedestrian diversion route will be along the footway adjacent to the A52 to Highfield Lane Bridge, then along Chequers Road to Wyvernside.

The pedestrian crossing on Wyvern Way will be relocated closer to the roundabout, outside Pizza Hut.

Derby County put on a spectacular show at The Hawthorns in the reverse fixture earlier in the season, dominating the game against the Baggies and that was reflected in the scoreline.

Jack Marriott opened the scoring for the Rams when an error by Jay Rodriguez allowed him to slip his shot under goalkeeper San Johnstone.

Tom Lawrence doubled the lead ahead of the break after creating space just inside the area to drill his shot into the far corner. The lead could have been greater going in to half-time with efforts by Scott Malone, Tom Huddlestone an Jayden Bogle being denied by Johnstone.

Harry Wilson added another following the break when his low left-footed effort found the bottom corner before Malone scored his first goal for Derby to round off the scoring.

Rodriguez scored a consolation goal for Albion late but were denied the chance of moving to the top of the table.

Tim Robinson will be the man in the middle at Pride Park on Sunday. In the 33 matches Robinson has refereed this season, he has produced 123 yellow cards and six red cards.

He has officiated in one fixture involving the Rams this season which came when Derby made history at Pride Park in a 6-1 victory over Rotherham United where Robinson awarded the Rams two penalties.

Robinson will be assisted by Timothy Wood and Ian Cooper on the lines, whilst Stephen Marin has been appointed as the fourth official.

Fans based in these dark market countries will be able to stream the game as part of their RamsTV subscription or for the usual one-off pay-per-view price of £5.