Striker Colin Kazim-Richards believes Derby County are more than capable of moving away from the Sky Bet Championship danger zone as the Rams face Queens Park Rangers at the Kiyan Prince Foundation Stadium on Saturday (3pm kick off).

The 34-year-old, who joined the Rams in October on a free transfer, has been a regular in manager Wayne Rooney’s first team since he took over initially on an interim basis in November.

That has continued since his permanent appointment with the striker starting the last 11 league games in a row as Derby have slowly climbed the Championship table.

It had been a disappointing start to the season by the Rams who found themselves languishing in the lower reaches of the division before Phillip Cocu’s departure in November.

Since then, Derby have solidified at the back and have one of the best defensive records in the division over the past two months, whilst they have also managed to pick up valuable wins.

The Rams head into this weekend’s game against the R’s following a 1-0 victory over high-flying AFC Bournemouth at Pride Park Stadium on Tuesday night and the striker believes Derby have more than enough quality in the side to move away form danger.

“Looking at Tuesday, that should give the players more motivation and an objective to go out and do that again. We should and we believe will. Looking at the loss to Rotherham last weekend and how we all felt, I know 100 per cent of the players felt it wasn’t good enough.

“That’s the bottom line, nothing more to say. Feeling how we felt, we don’t want to feel that again. I have been relegated, it is not a nice feeling. It doesn’t go away; it stays with you forever.

“I always say to people that your history is your present. Things don’t get forgotten. I’m sure when I came here, I hadn’t played in England for a long time and people were still talking about stuff that they thought might have happened when I was 16 or 17.

“I’m 34 now with three kids and a wife. I am positive, really I am, because the work that we put in is phenomenal, the preparation is phenomenal and now it’s down to us to take some responsibility to go and do it, because everything with the coaching and preparation has been set.” 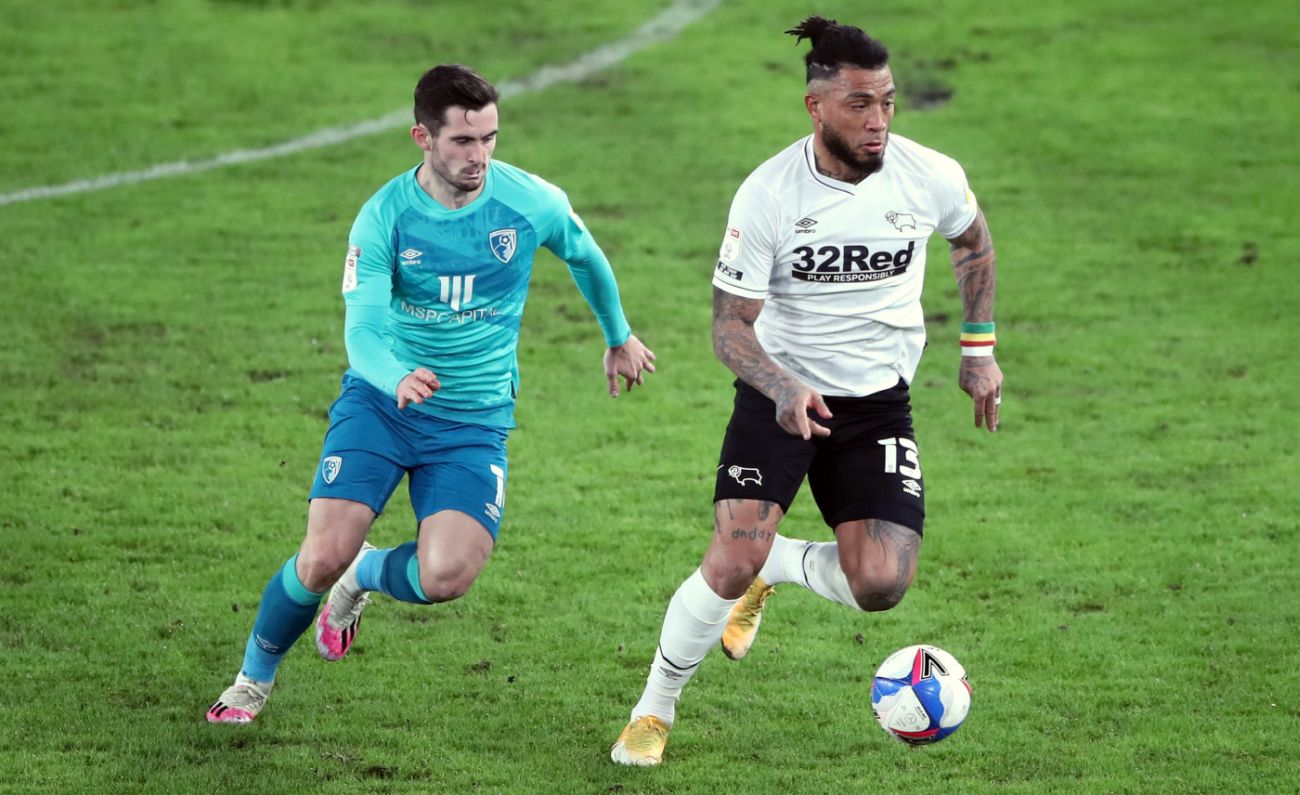 Since his arrival in October, Kazim-Richards has proven to be a positive influence both on and off the pitch and can be seen encouraging his teammates and leading from the front.

It’s a role he is accustomed to due to his experience in the game and he is pleased to be playing his part.

“I feel the best I’ve ever felt but let’s be honest, I am 34 – I still feel like I have four or five more years – but to be in this situation in the world and not playing in front of fans and coming to the ends is something that is sad,” he admitted.

“I sit at home talking to my wife and kids about it. My son cried the other night because he wanted to come to the stadium, but he can’t. He has been with me on many travels and he is nine, turning ten in March.

“To get the response from the Derby fans has been amazing and to play in front of them would be even more amazing because I feed off fans. That is why a lot of other fans have a lot to say, because if I play against you, you hate me. You’re supposed to, but if I play for your team – you might still hate me!

“But most of the time I do get appreciation for the work that I do and it’s nice. At the end of the day, my job is to do that.

“There are people out there doing crazy jobs. I have received a lot of messages, that I won’t talk about, and normally I don’t look at responses on social media, but in this situation of what’s going on I have started to open direct messages and there are some amazing stories of how all of us, not just me, are giving people something to look up to.

“I just want to say that it does mean a lot and it doesn’t go unnoticed, definitely not. I can’t wait to get back to some form of normality, I don’t think the world will ever be what it was 18 months ago, but regarding fans back in the stadiums, I think the general public need it as much as we do.

“It is amazing and nice to get some recognition, but my job isn’t done yet I am still going to continue to put my body on the line as much as I can and the objective is there – to push away from relegation zone. I think we have got more than enough and we are more than capable.”