Derby County dominated large periods of the game against Preston North End but had to settle for a point at Deepdale as it ended goalless. 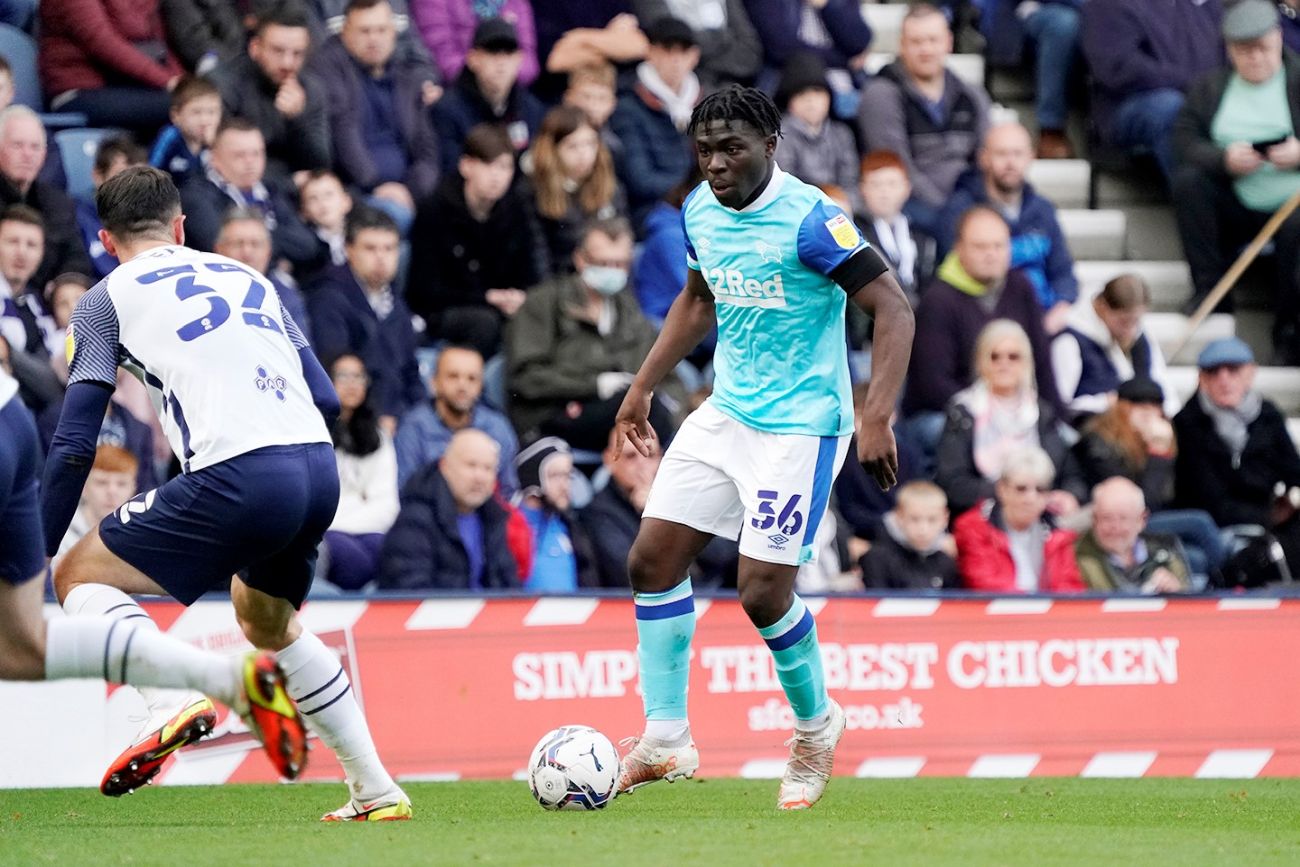 The Rams enjoyed the better spells of possession and went closest to scoring in the second half as Curtis Davies was denied by the crossbar, whilst his central defensive partner Phil Jagielka saw an effort saved by Preston North End goalkeeper Daniel Iversen in the same attack.

Derby continued to push forward but could not manage to break the deadlock despite dominating the game.

The point moves the Rams to three points in the Sky Bet Championship table and extends their run to three games unbeaten and three games without conceding a goal.

Manager Wayne Rooney made four changes to his side from the goalless draw against Swansea City prior to the international break as Phil Jagielka and Sam Baldock returned from injury, whilst Festy Ebosele replaced Nathan Byrne at right back as the full back served a one-match suspension for picking up five bookings. Lee Buchanan also came back into the starting 11. 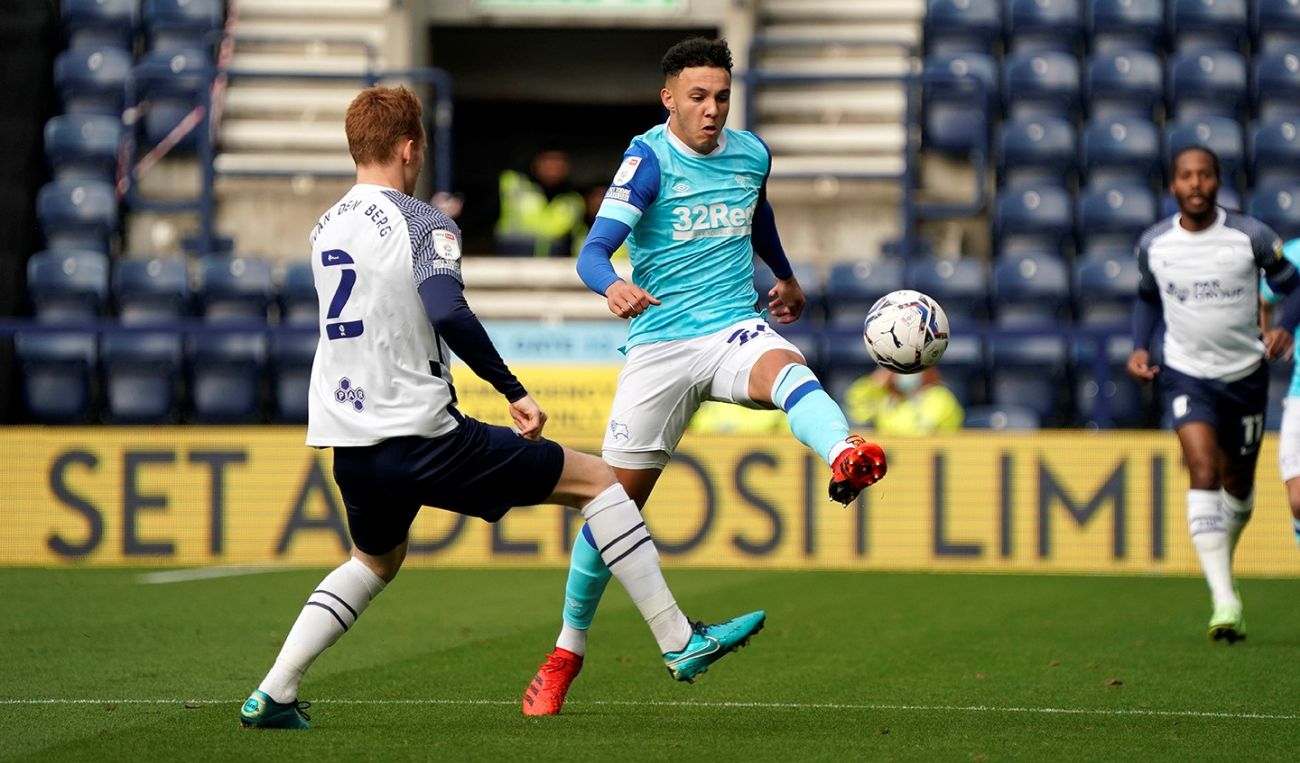 And Derby would start on the front foot and command the opening exchanges of the game. They could have gone ahead, too.

Graeme Shinnie was the first to have a sight of goal on three minutes but his effort went over the crossbar from 25 yards.

After North End midfielder Daniel Johnson went into the book early on for a late challenge on Jason Knight, Derby continued to put the pressure on their hosts with Ravel Morrison stinging the palms of Preston North End goalkeeper Daniel Iversen.

However, midway through the half, Derby were forced into an early change as striker Baldock sustained an injury and was replaced by Louie Sibley. 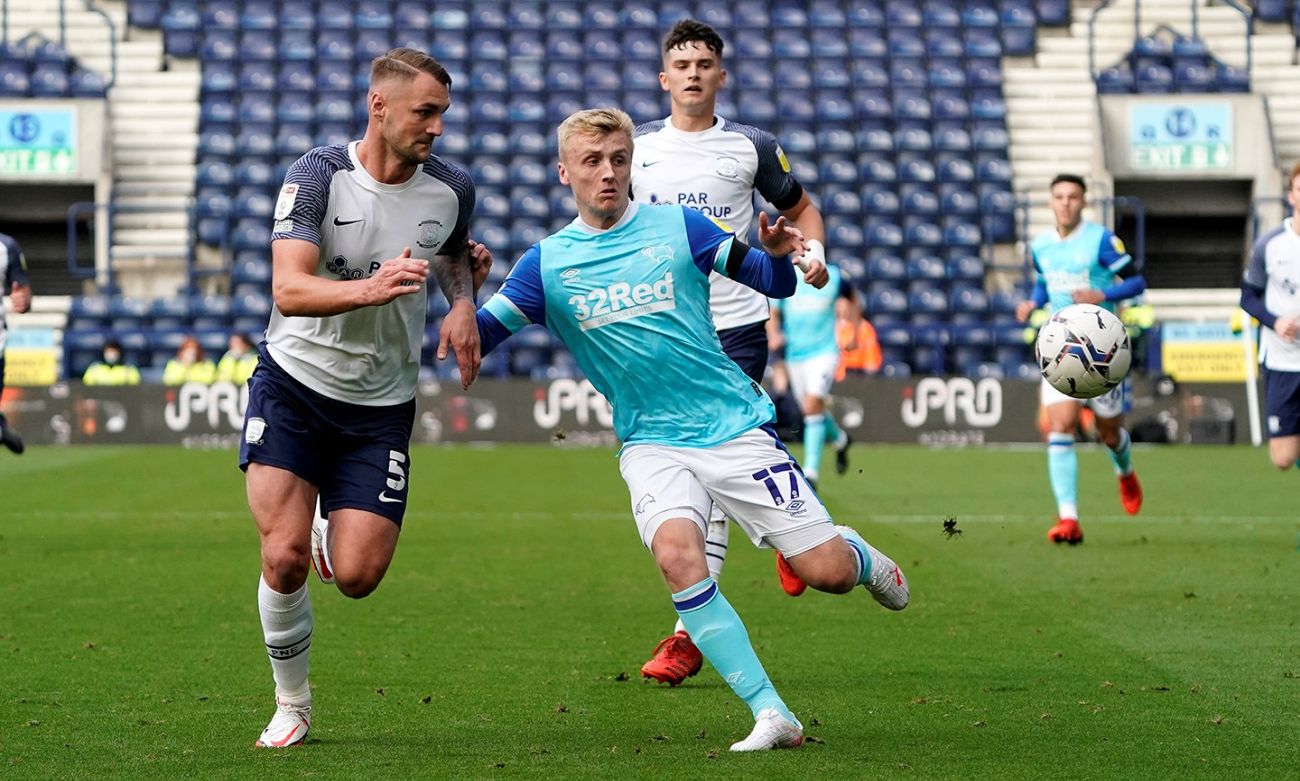 The Rams kept up the intensity and again forced a save from Iversen in the North End goal. This time, skipper Tom Lawrence had a snapshot from 25 yards but the Danish stopper made a smart stop to his right.

With the hosts offering little in attack - a tame Josh Earl header going over the crossbar the closest they came - Derby almost took the lead in first half stoppage time.

After a ball was cleared to the half way line, Ebosele picked up the ball and embarked on a mazy run forward. He meandered his way through a shaky Preston North End before finding himself one-on-one with Iversen but the goalkeeper managed to push his effort wide to ensure the scores were level at the break. 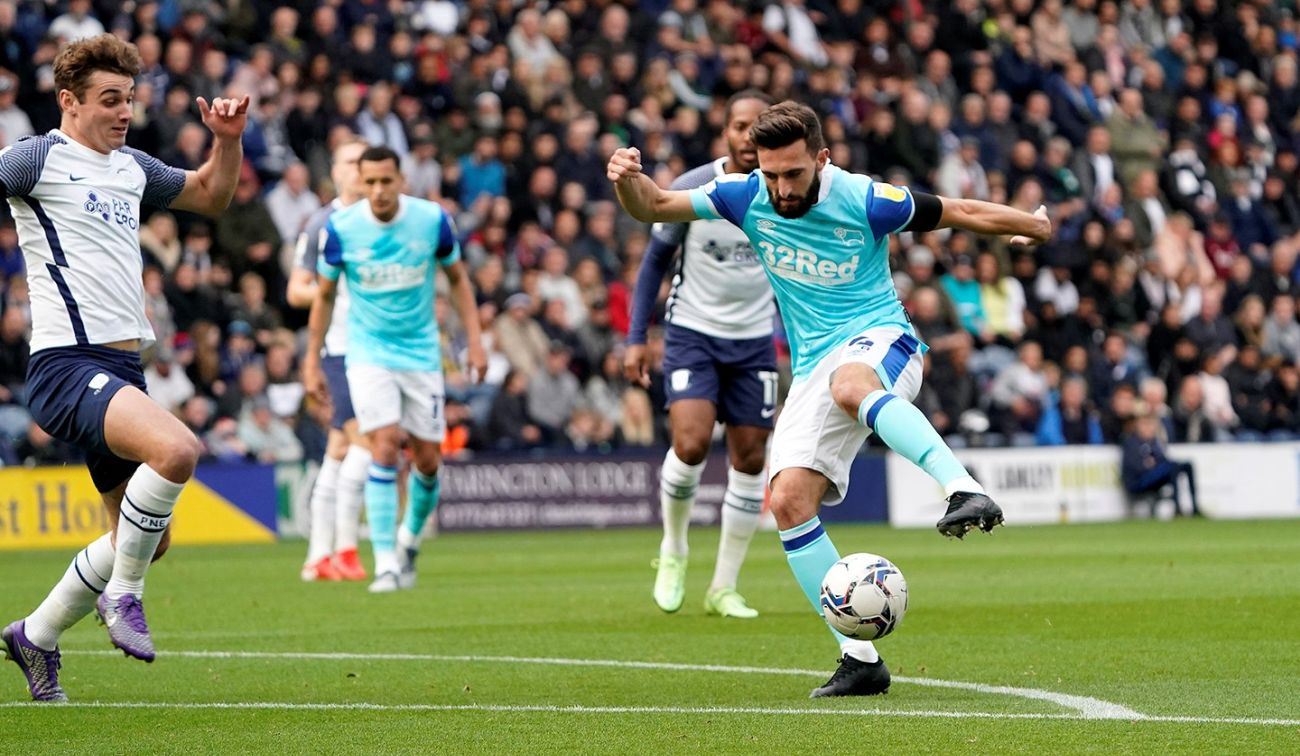 Preston North End had the first opportunity of the second half as central defender Andrew Hughes headed wide from an inviting cross into the centre on 50 minutes.

However, two minutes later, Derby had a strong appeal for a penalty kick as Ebosele crossed into the centre. The ball appeared to strike the arm of Hughes but the referee waved away Rams’ strong protests.

And after a quiet opening to the second half, the game lit up just after the hour mark as the Rams pushed for the opening goal of the game.

The Rams played some neat football and worked their way up the pitch. Lawrence managed to hold up the ball inside the penalty area and found Morrison 25 yards from goal but he whipped his effort wide.

A minute later came Derby’s closest opportunity to opening the scoring. Midfielder Jason Knight managed to dig out a cross to the back post for Curtis Davies who had stayed forward from a corner kick.

The defender looped a header back across goal but the ball struck the crossbar. As it came down, his central defensive partner Jagielka headed goalwards but Iversen managed to get back up and save before Morrison struck a deflected effort wide. 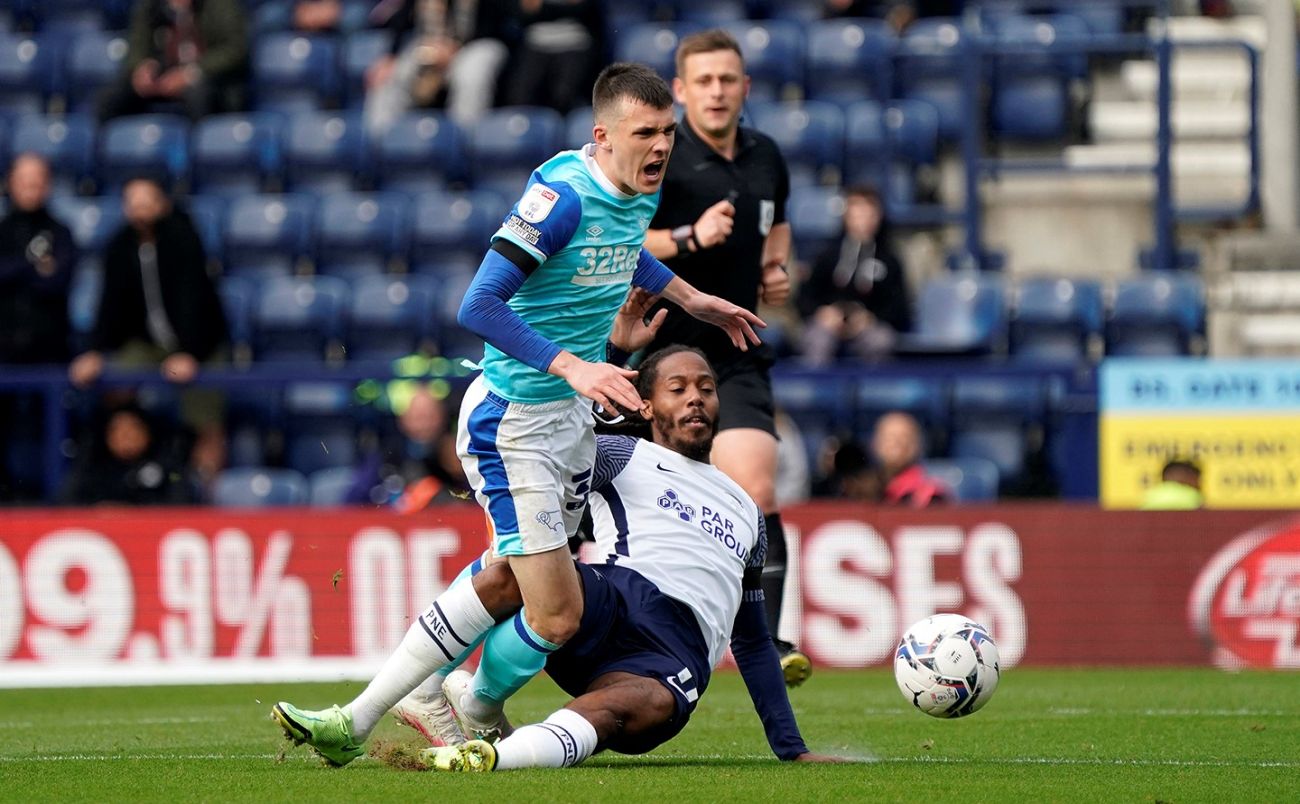 The Rams were in the ascendency and taking the game to their hosts as Shinnie was the next to force Iversen into a smart save.

However, Derby had to be wary of the counter attack as goalkeeper Ryan Allsop was quick off his line to deny Preston North End substitute Scott Sinclair from capitalising on a loose ball in the area.

The Lilywhites started to up the tempo in the final 10 minutes of the game and went close to snatching a victory but Derby stood firm. 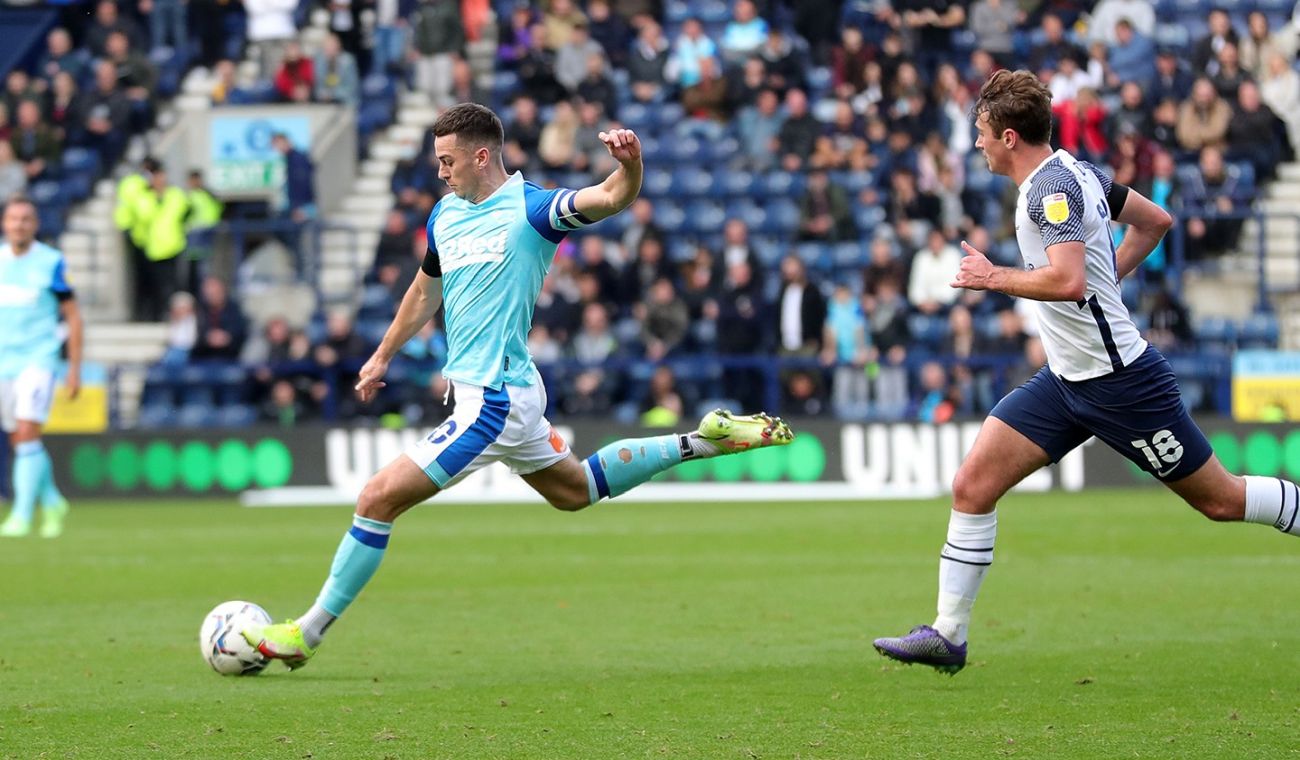 Striker Emil Riis had Preston’s best chance of the game with 82 minutes on the clock as he found himself one-on-one with Allsop but he tamely struck into the arms of the goalkeeper as the chance passed.

And as time ticked by, neither side really threatened as both were forced to settle for a point at Deepdale.