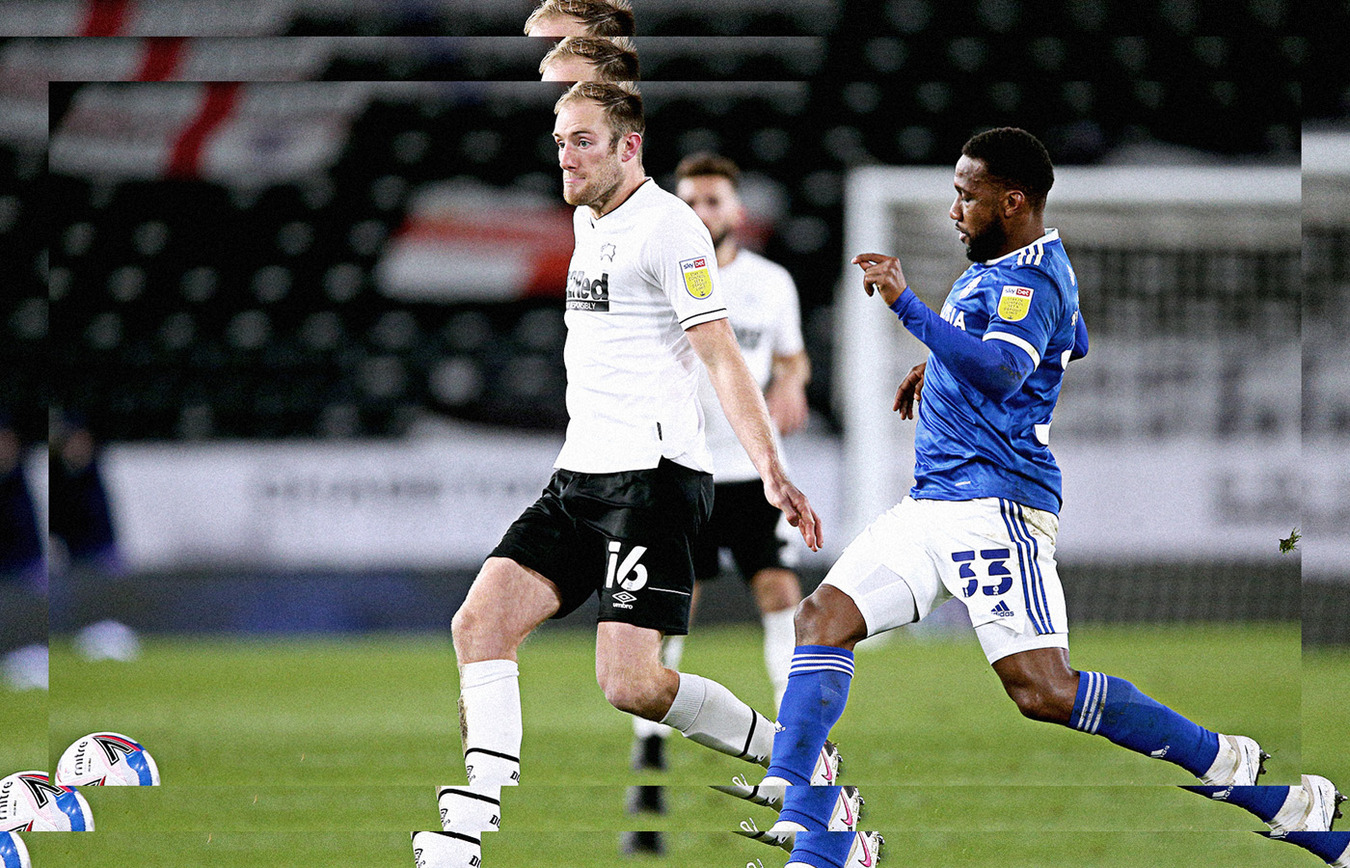 Cocu: "We Needed To Kill The Game" Cocu Forced Into One Change For Cardiff Clash Rosenior: “Let’s Focus On The Here And Now” Rosenior: "We Need To Start On The Front Foot" Derby County were forced to settle for a 1-1 draw against Cardiff City at Pride Park Stadium as Martyn Waghorn netted for the second consecutive game.

Martyn Waghorn continued his fine form on his return from injury, scoring his second free-kick in as many games and in his first two starts of the 2020/21 campaign.

However, for the second consecutive game, their hard work was undone late in the second half and where forced to settle for a draw after Kieffer Moore equalised.

Phillip Cocu was forced to make one change ahead of the game to the team that drew against Nottingham Forest five days earlier with Kelle Roos replacing David Marshall in goal.

The Rams came close after just ten minutes after patient build up. Andre Wisdom bullied his two markers on the right deep in Cardiff’s side and used his strength to create space to find Tom Lawrence from a tight angle. The winger took aim from just inside the right of the area and his low effort skipped through and just past the far post.

Derby continued with smart ball possession and build-up play and looked the most likely to score in the opening stages. Twenty minutes in, good link-up play between Nathan Byrne and Kamil Jozwiak on the right sees the Polish winger run in and his cross was deflected out for a corner.

The resulting set piece brought more chances for the home side. First, Waghorn near-post flick from Lawrence’s delivery wasn’t able to tuck into the corner and was recovered by Lee Buchanan on the left. The full-back sent the ball back into the area for Curtis Davies to try his luck with an overhead volley which was sent too high.

The goal soon came however. Lawrence picked up a loose ball and waltzed towards the edge of the area, but was brought down as he pulled back to shoot.

After a few minutes delay as the Welshman go treated on the pitch, Waghorn stepped up to the free-kick to the left of the just off-centre and for the second straight game produced a moment of magic as he bent the effort into the left corner.

With five minutes left to play in the half, the Bluebird’s got their best opportunity from Will Vaulks’ looping ball from the right which Kieffer Moore met and nodded on, but it clipped the far post.

It was an explosive start to the second half by Cocu’s side coming close to extending their lead in the opening minute. Jozwiak, Waghorn and Nathan Byrne linked up down the right as they burst out the blocks with Byrne then flashing a cross along the face of the goal which was turned out for a corner.

Moments later, it was Cardiff’s turn to come dangerously close to finding the back of the net when Junior Hoilett headed on to the post from a cross before Roos’ brave goalkeeping saw him jump highest to claim a dangerous ball in the area, jumping over the back of Davies.

The Rams continued with explosive energy through the half with the whole team bursting forward. Waghorn received the ball on the edge of the box, but a mix-up between the two Cardiff defenders saw the ball pop out to Lawrence on the right. The winger looked to square for Waghorn but it was well-blocked by Alex Smithies.

With 77 minutes on the clock, the Bluebirds equalised. After great defending for the majority of the game, Shey Ojo slipped the ball in behind to Moore for the finish to level the scores.

Jason Knight looked to regain the lead five minutes later when Jozwiak laid the ball back to him and the Irishman send the ball hurtling just wide of the mark.

Derby didn’t give up the fight in the final minutes as Waghorn came close as he latched on to a through ball and saw his close-range effort blocked by Smithies before flashing a dangerous cross to Colin Kazim-Richards who was just beat to the ball for what would have been a brilliant and important debut goal.

The wnning goal failed to come however, and the Rams will return to action on Saturday when they head to the South Coast to face Bournemouth.