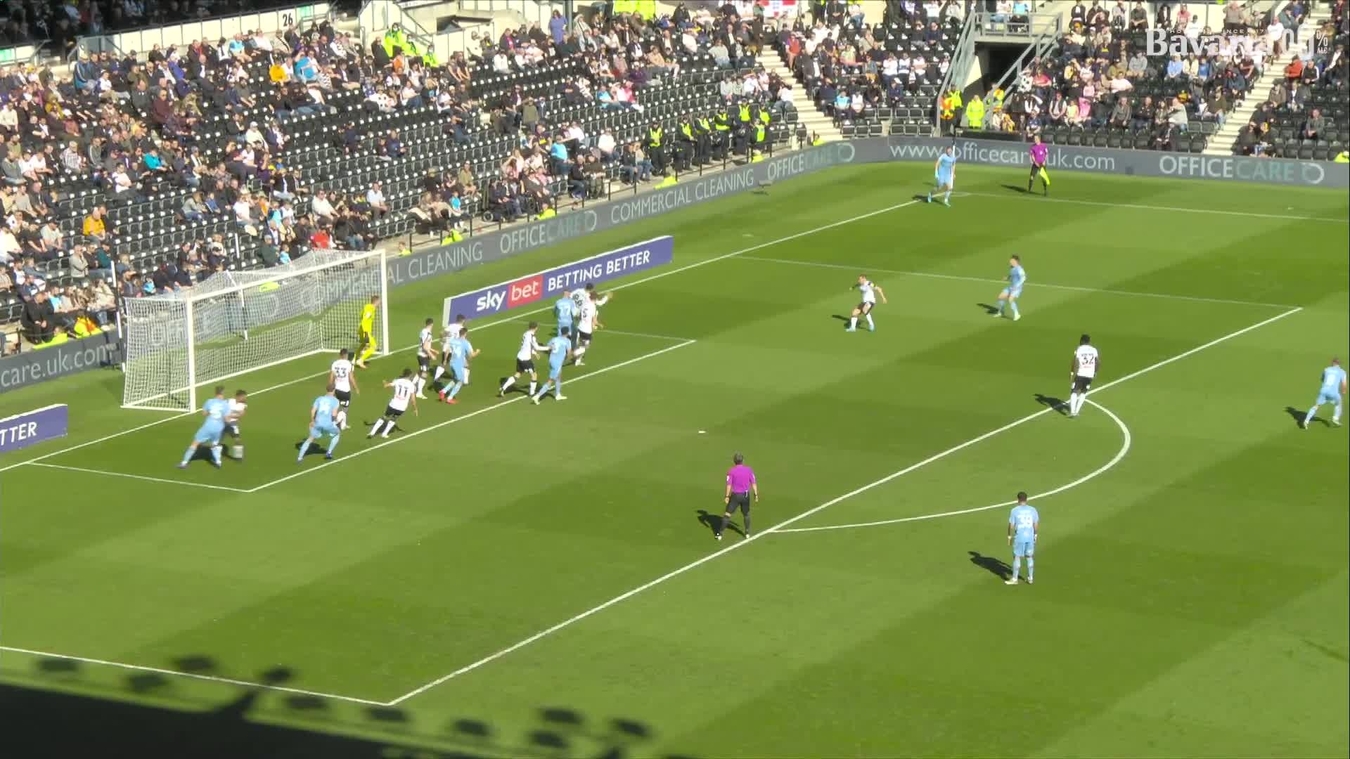 Rooney Gives His Reaction To Derby's Home Draw Against Coventry Buchanan: “We Have Got To Take The Positives” Rams Forced To Settle For A Point Against Coventry City Rooney: “We Want To Go Into The Break On A High” Lawrence Determined To Bounce Back Ahead Of International Break Secure Your Seat For Derby's Next Home Fixture Against Coventry Derby County were forced to settle for a point at Pride Park Stadium as they drew 1-1 with Coventry City. 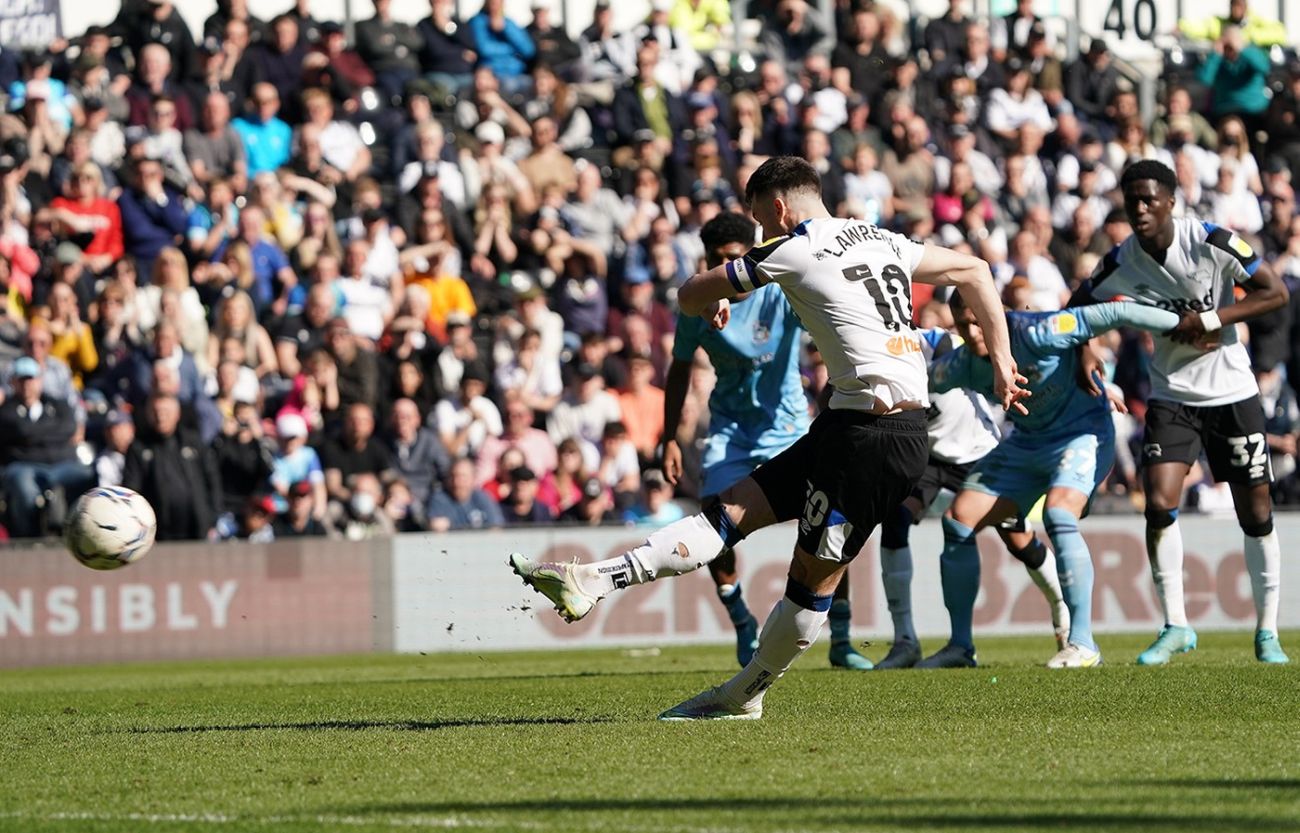 Matty Godden gave the Sky Blues the lead in the first half, but it was a game Derby dominated for large parts but fell just short.

Skipper Tom Lawrence equalised from the penalty spot after he was upended in the box midway through the second half to score his tenth of the campaign, but despite throwing everything forward in a bid to get something from the game, they could not find the winner. 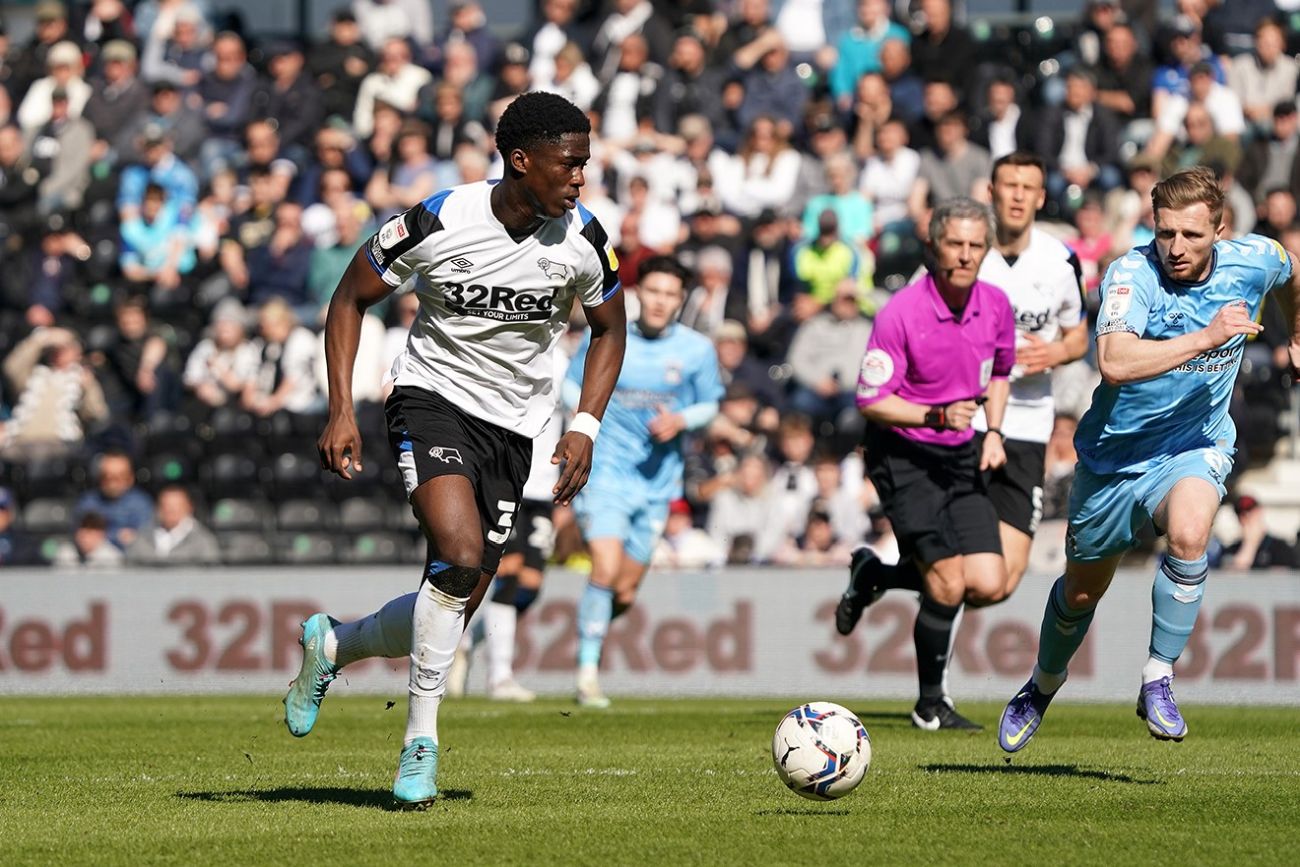 Manager Wayne Rooney made one change to his side from Tuesday’s game against Blackburn Rovers as Krystian Bielik replaced Jason Knight in midfield.

And the Rams started brightly as they forced a succession of corners which were well defended by the Sky Blues.

It was Mark Robins’ side who almost made the early breakthrough on nine minutes as Godden capitalised on a defensive mistake in the Derby defence, but Ryan Allsop was out quickly to deny the forward. 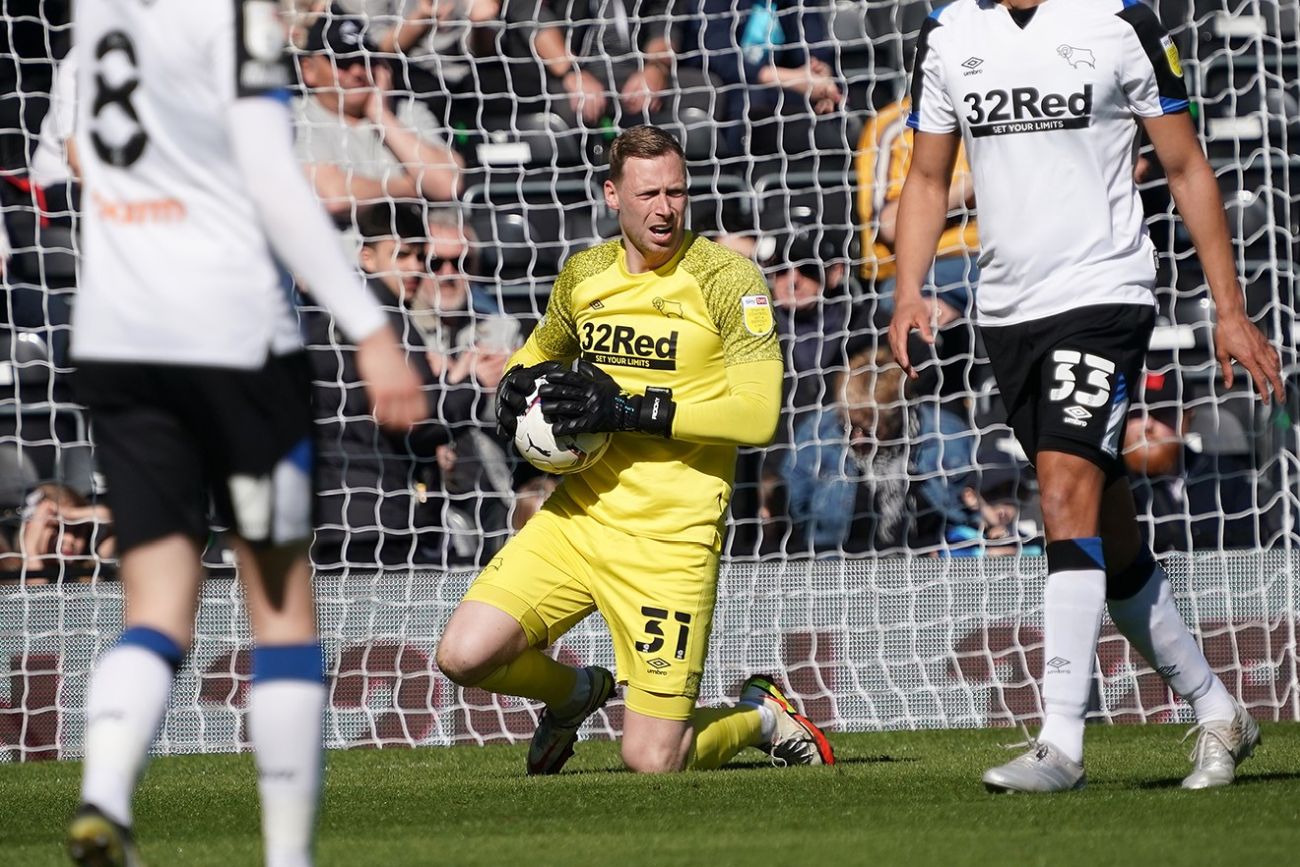 Derby continued their attacking intent and Ravel Morrison was inches away from putting the Rams ahead soon after. He created a yard of space for himself on the corner of the 18-yard box and curled towards the top corner, but Coventry goalkeeper Simon Moore tipped his effort over the crossbar.

Youngster Malcolm Ebiowei was showing some neat touches and midway through the half, he picked up a loose ball and found Max Bird on the right-hand side.

The midfielder crossed into the centre for the onrushing Tom Lawrence at the back post, but the skipper’s header was saved on the line by Moore. 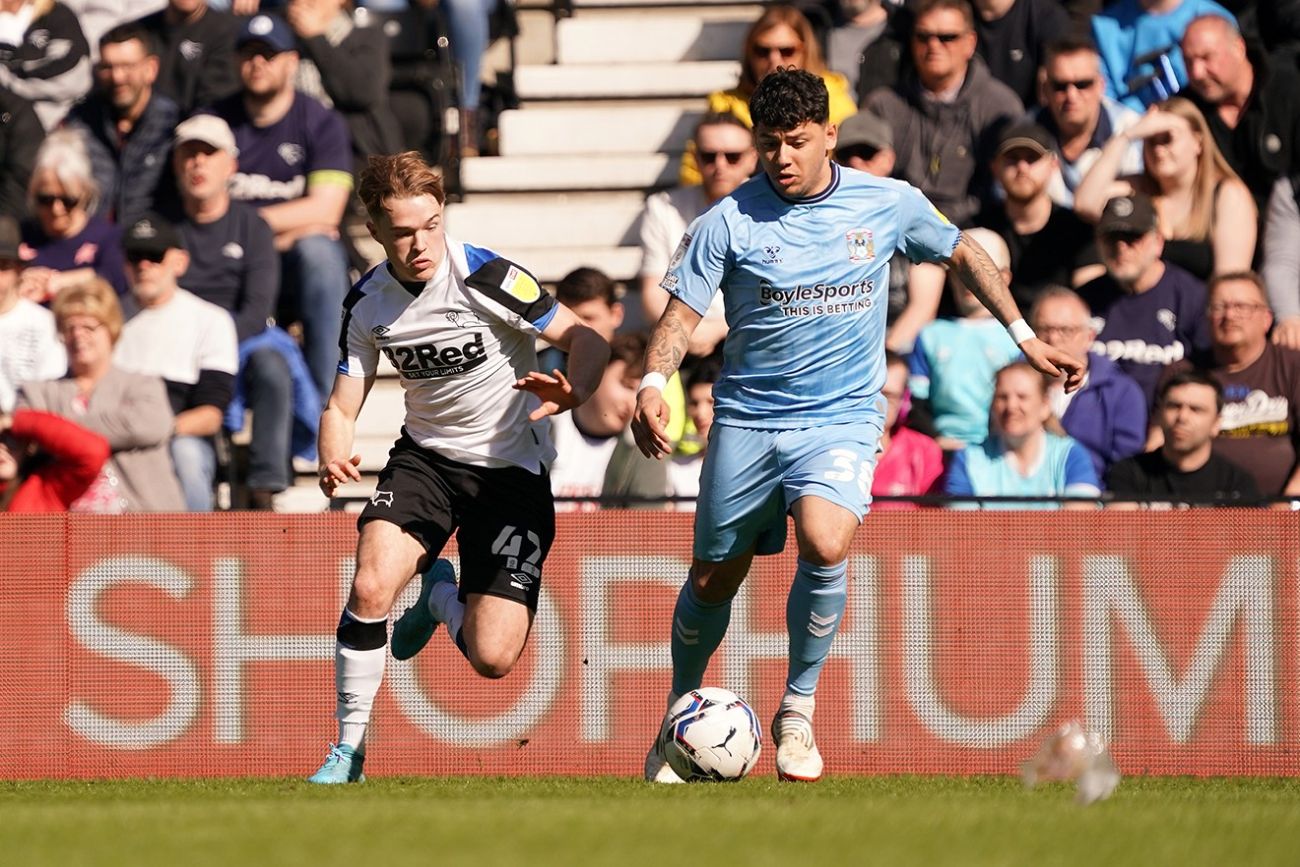 Ebiowei was attempting to make things happen as a late challenge from Jake Bidwell on the forward earned the Coventry man a booking, whilst a minute later, he raced into the box and went over, but the referee waved away his penalty protests.

But, against the run of play, the Sky Blues would take the lead. It was good play between Callum O’Hare and Godden as they played a neat one-two before the latter found the bottom corner with a measured finish to put the visitors ahead. 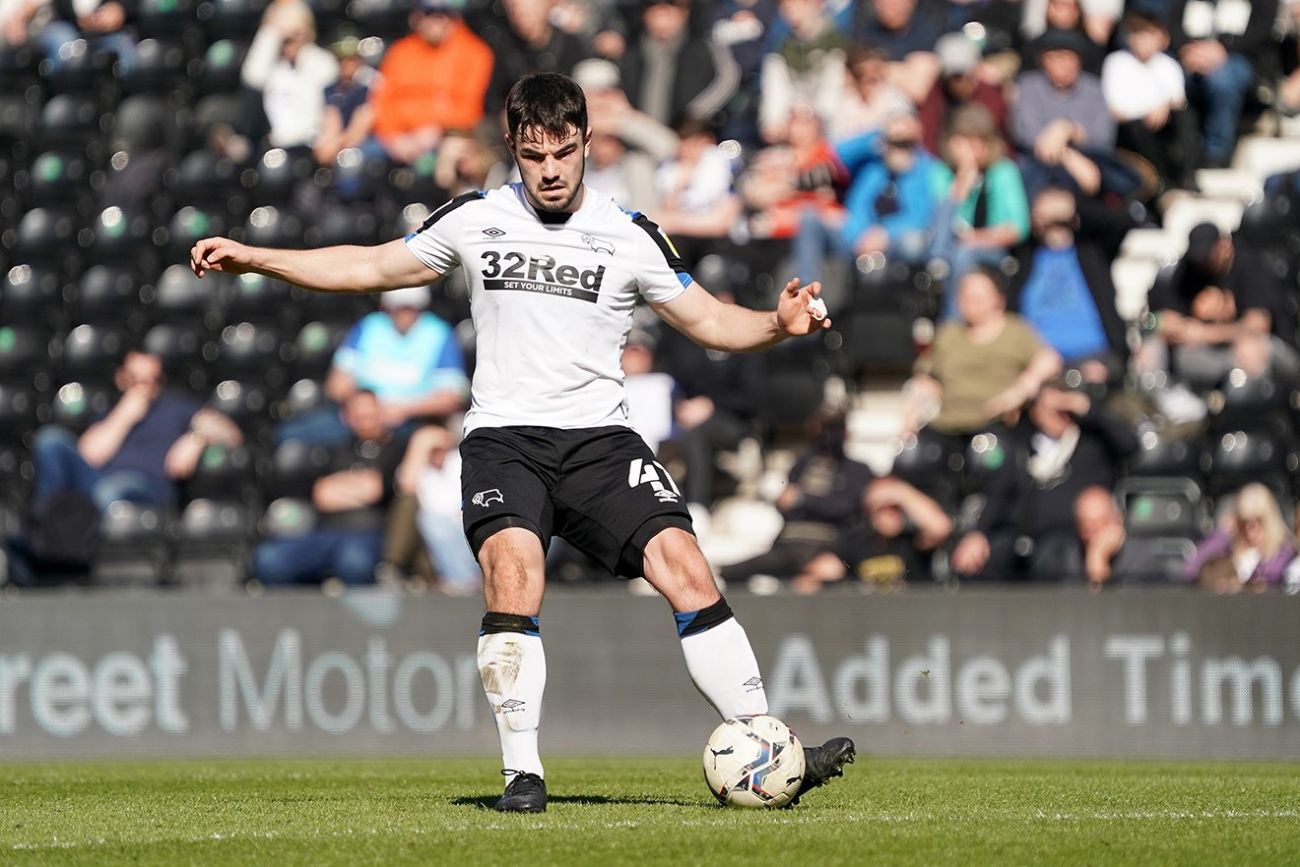 It settled Coventry into the game as they almost doubled their lead soon after as O’Hare was allowed time and space on the edge of the box but Allsop did well to tip his effort wide of the post.

Derby continued to probe as Ebiowei and Nathan Byrne threatened on the right-hand side, whilst Bird and Bielik enjoyed possession in midfield but the Rams struggled to make in-roads on the Coventry defence. 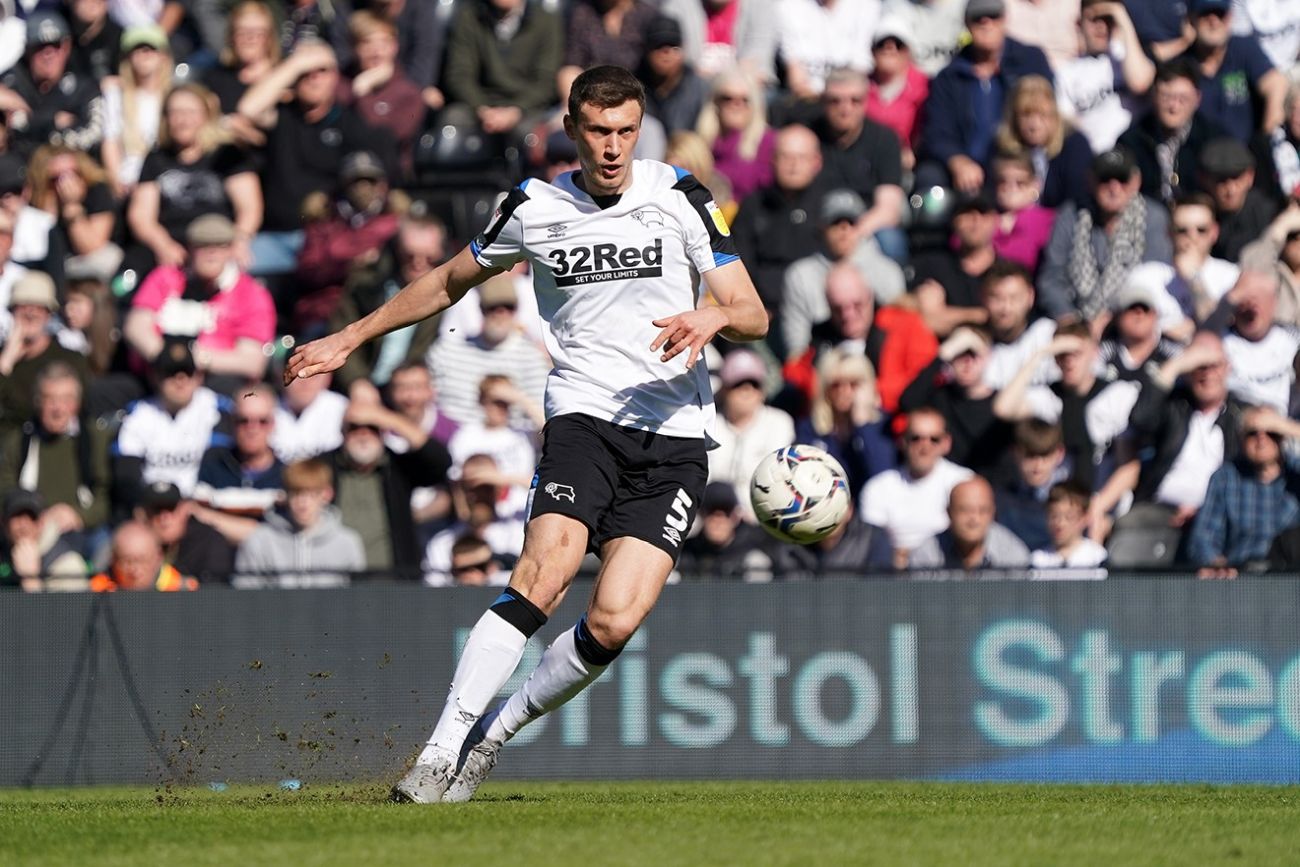 Rooney made a tactical change at half time as Luke Plange replaced Liam Thompson and it had the desired effect as the Rams continued to take the game to their visitors. 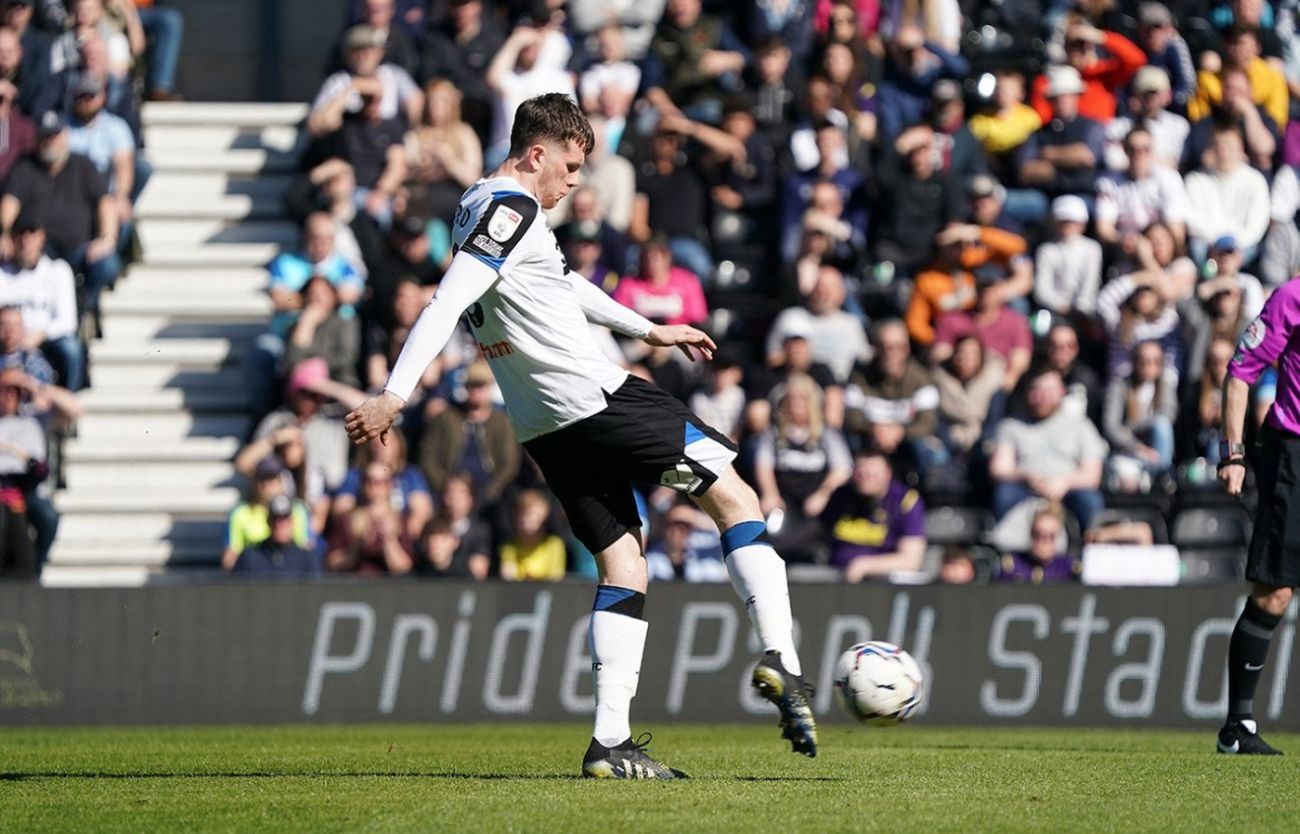 Lawrence stepped up to take the set piece but fired his effort against the wall. But, Derby kept coming forward. Ebiowei had his own effort which was saved by Moore from 25 yards, whilst he had a huge hand in Derby winning a spot kick midway though the second half.

He raced into the penalty area before finding Lawrence. The skipper wriggled free and was brought down by Sky Blues defender Ben Sheaf and the referee pointed to the spot. 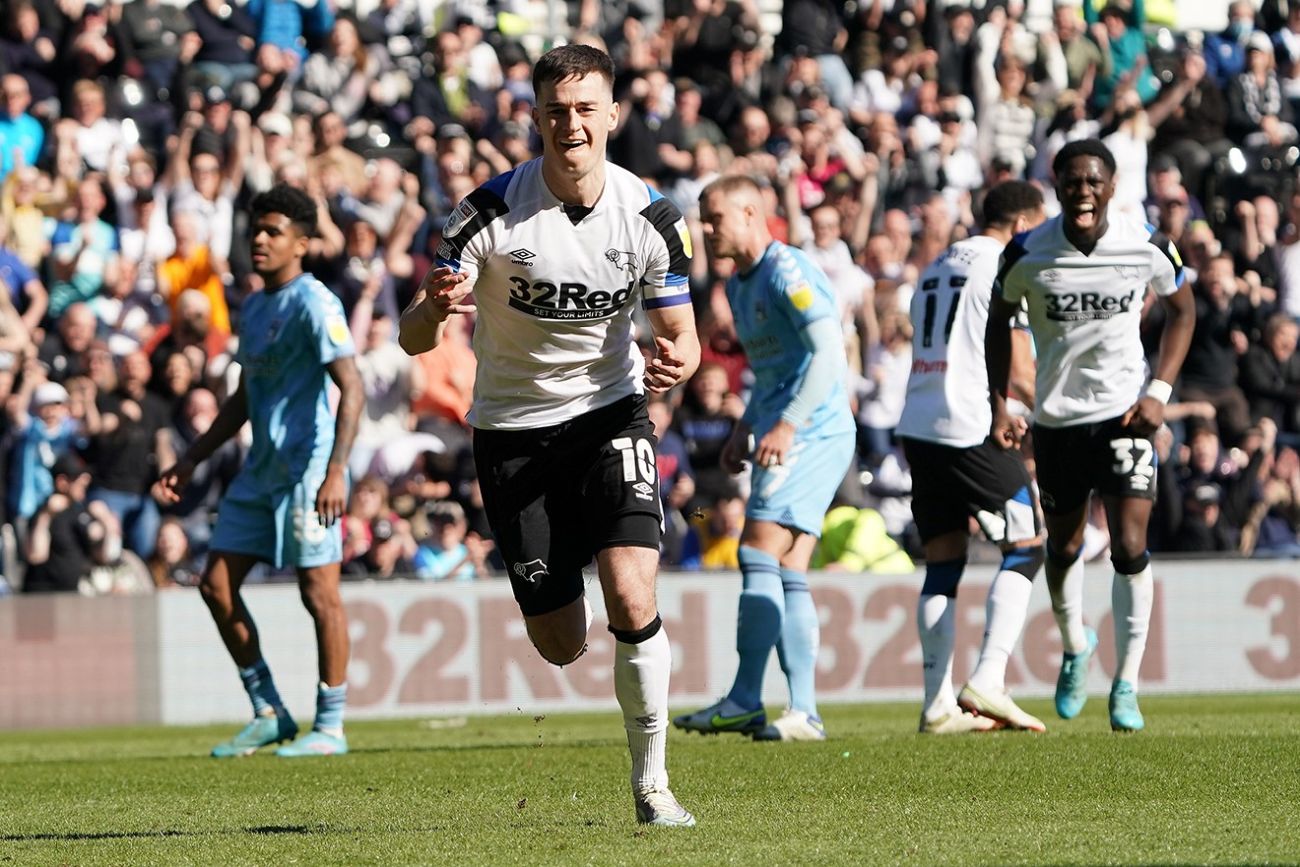 The Derby captain picked himself up to take the resulting penalty which he confidently dispatched into the top corner to net his tenth goal of the campaign.

However, following the goal, Derby had their goalkeeper Allsop to thank for keeping the scores level as the Rams’ goal led a charmed life.

Firstly, substitute Viktor Gyokeres raced clean through on goal. With only the goalkeeper to beat, and with Bielik applying pressure, he fired over the crossbar, which proved to be a huge let off for the Rams. 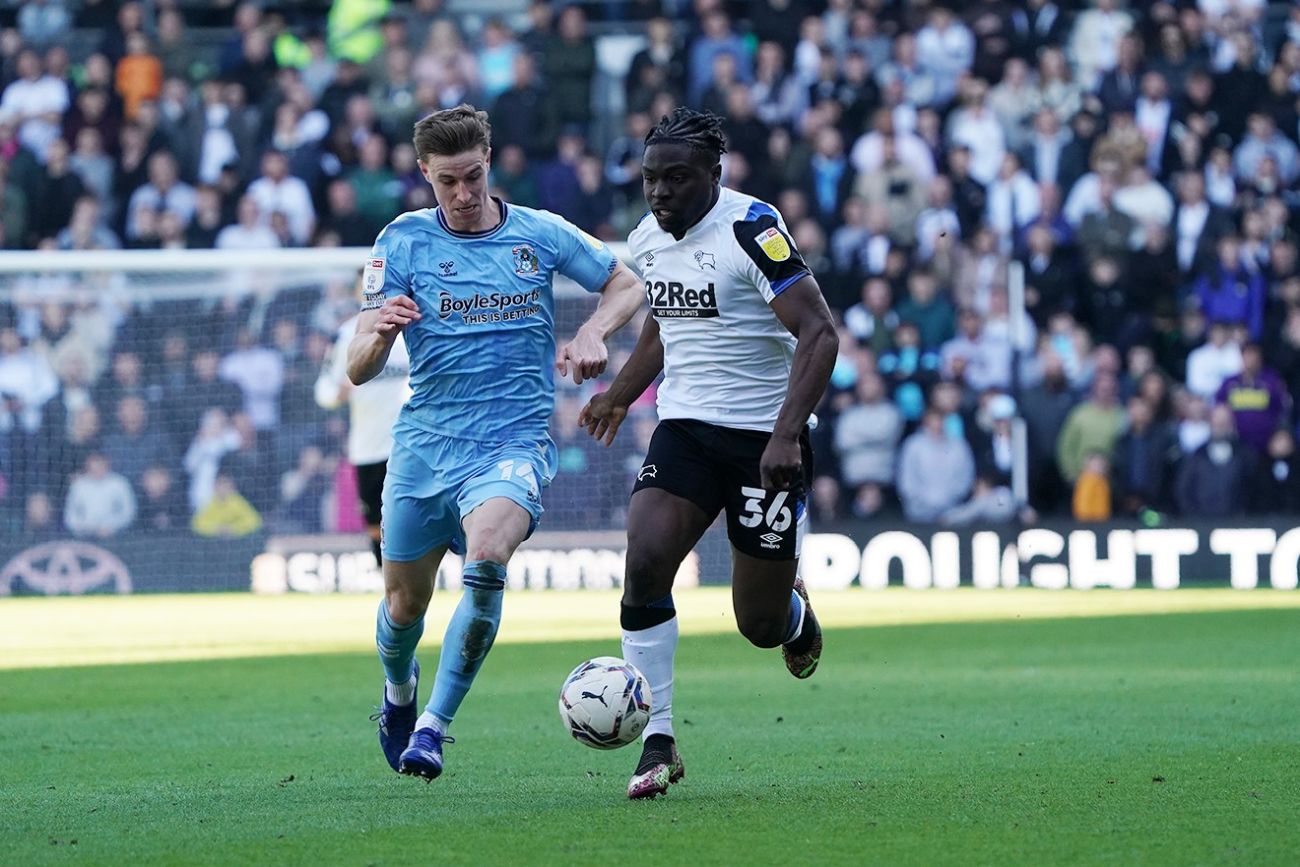 The goalkeeper had to be alert on two occasions soon after as he twice denied Gustavo Hamer from distance, whilst on 82 minutes he made a huge stop to deny Gyokeres.

The striker had broken free after receiving a pass from Godden, but the goalkeeper stood up to the challenge and denied the striker with his feet to keep the scores level.

Derby would finish the game strongly, however. Consecutive free kicks from the edge of the box, one from Lawrence and the other from the dangerous Ebiowei forced good saves from Moore, whilst the Rams thought they had grabbed the winner in the last minute of the game. Substitute Louie Sibley reacted quickest to a cross into the box but saw his effort deflect off the post and away to safety as Derby had to settle for a point at Pride Park.