This summer has provided an unfamiliar feeling for central defender Richard Stearman, having been out of contract for the first time in his professional career. 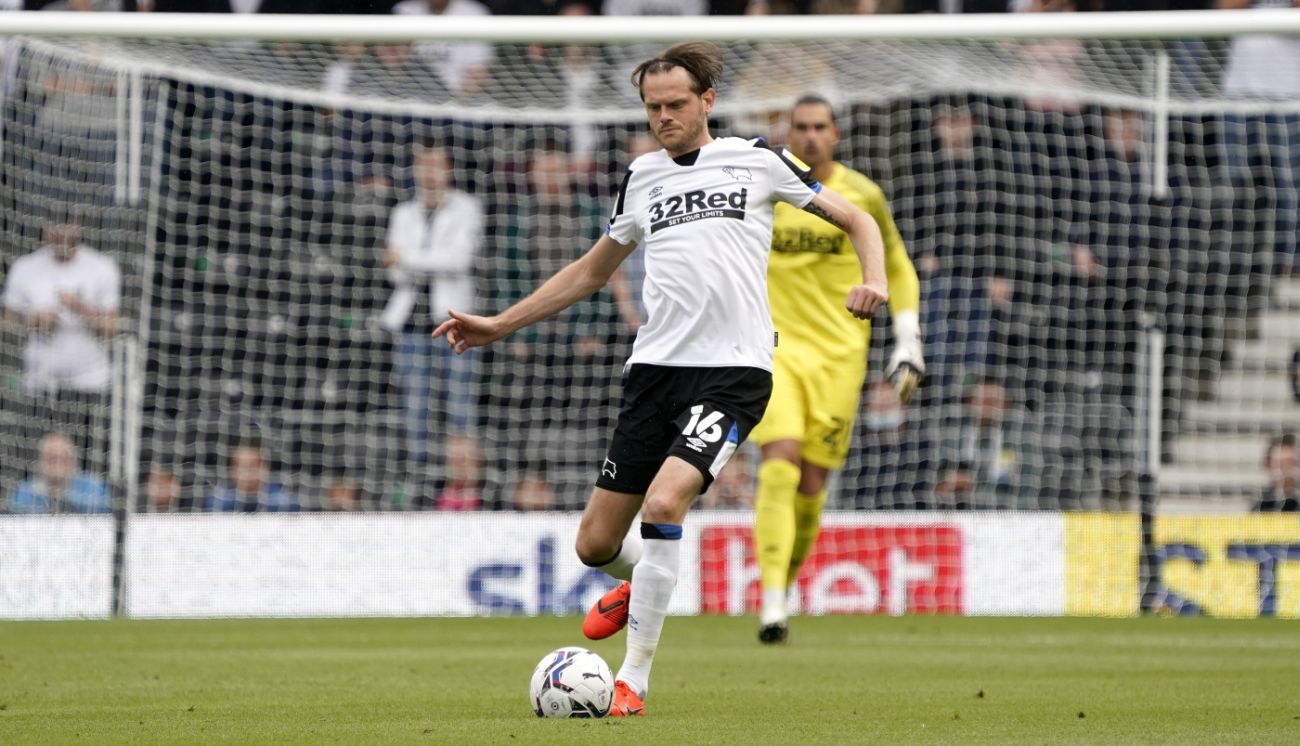 After leaving Huddersfield Town at the end of last season, the defender found himself without a club but with valuable, high-level experience under his belt, he was never going to be without suitors.

So, when he was invited to train with Derby County during pre-season, it was a good opportunity to impress Wayne Rooney and his staff and earn a contract with the Rams.

The contract did finally come on the eve of the new Sky Bet Championship season, and despite it being an unsettling period for the experienced 33-year-old, he is pleased to have finally secured his future at the club on a one-year contract.

Ironically, his debut came against the side which he left in the summer, Huddersfield, and he put in a solid display to earn the Rams a point in a 1-1 draw at Pride Park Stadium.

“It was a bit of a whirlwind few days for myself and the club,” Stearman admitted, chatting to RamsTV. “It was just nice to get out there, have some fans back in and pick up a valuable point.

“It is the first time I have been out of contract, so it is a new experience for me and being at the club without contract was a strange experience, not just for me, but there were several of us in the same boat.

“It was a bit of a nervous wait to see if it could get sorted and get a few of us in the door.

“I am really thankful that I managed to get a contract and I am really happy to be here. I want to progress really.

“We all knew the remit when we came in that the likelihood was that we were going to get a contract. We just had to wait for a few bits to be cleared off field and then just go from there.

“It is a nervous time for a player if you are out of contract, but you are still putting yourself at a risk to try and gain a contract without giving yourself that security in the background.

“A lot of credit has to go to those players to show that willingness that we are fit, we are here and want to play for Derby County. Thankfully a few of us managed to get a contract.”

Stearman spent a year-and-a-half at the John Smith’s Stadium, playing 39 times in all competitions but only played in front of supporters 10 times, owing to the outbreak of COVID-19.

And, as usually is the case, his first game for Derby came against the Terriers on an important afternoon for both sides as supporters returned to football stadiums up and down the country for the first time domestically since March 2020.

“It was good from a selfish point of view; I know how they play and some of their strengths and weaknesses. I thought it was a good game on the whole, probably a draw was a fair result.

“I think the lads can be very proud and the staff with how we handled last week and the build-up to the game. To get a point against a good team was certainly very valuable.

“Personally, it was just a big relief to have fans back in the stadium. Football is just not the same, it is a different sport without fans there.

“It is a big relief to have them back, to have their backing and just to hear some noise. Long may that continue and we can move forward together now.”

The Rams are back in action on Tuesday night as they face Salford City in the First Round of the Carabao Cup at Pride Park Stadium (7:45pm kick-off).

Rooney’s side have already faced the Ammies this season, in a friendly fixture last month, and Stearman knows that counts for little as the pair face each other once again tomorrow night.

“It is relentless, but it is why we do it - we love it,” he commented. “We’re straight back to it now.

“We played Salford in pre-season so we know a little bit of what they are about. It will be a tough fixture and we are looking to progress to the next round.”