Derby County will hit the road for the first time in the 2020/21 Sky Bet Championship season when they travel south to take on Luton Town at Kenilworth Road on Saturday afternoon (3pm kick-off). 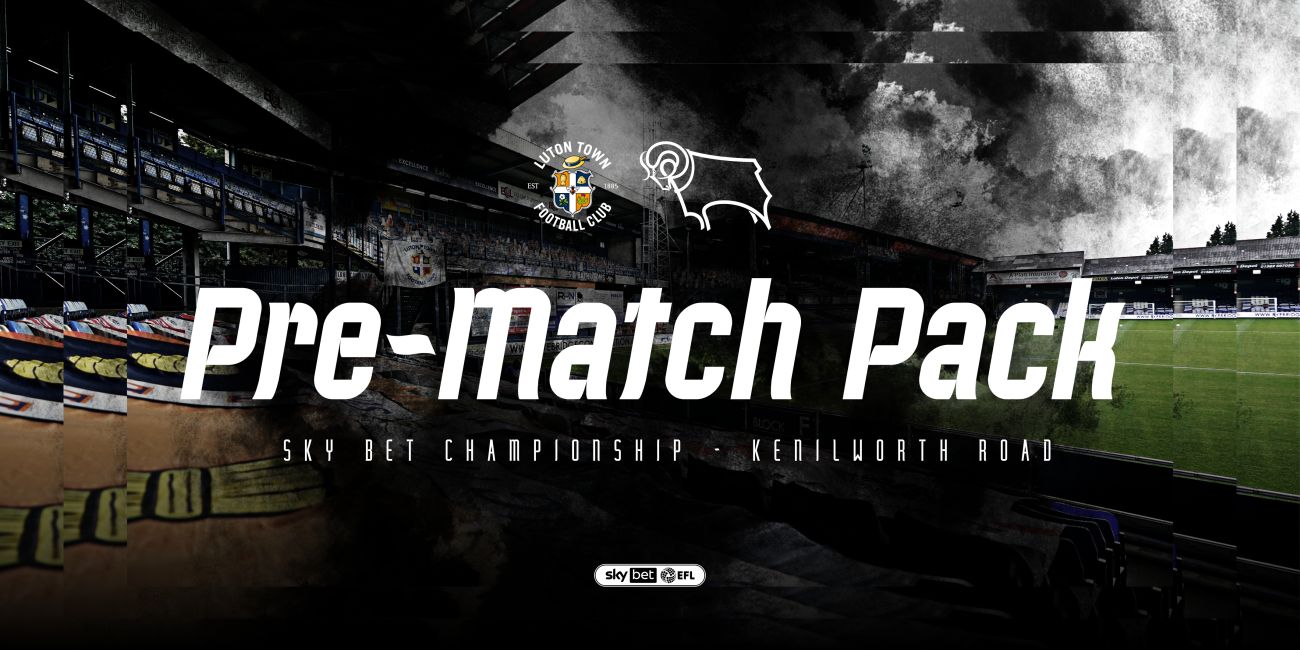 Phillip Cocu's side will be looking to bounce back from the 2-0 defeat at home to Reading on the opening day of the campaign last weekend and get their first points of the season on the board.

dcfc.co.uk has gathered all the information you will need to know ahead of Saturday's game at Kenilworth Road.

Saturday's Championship fixture is available to watch LIVE on RamsTV from the comfort of your own home.

The match will be available to watch LIVE in the UK and around the world on RamsTV, via dcfc.co.uk or through the Official Derby County App, which is available from the Apple App Store and Google Play Store now.

PLEASE NOTE: Under EFL guidelines, away weekend matches are not included in the offer to Season Ticket Holders to watch live matches on RamsTV whilst access to stadiums is restricted, while overseas monthly subscribers can watch the match as normal. Otherwise, access to watch the games is via pay-per-view passes ONLY.

The RamsTV Matchday Live show will start from 2:30pm on Saturday and will include the following:

Supporters that have watched live match coverage on RamsTV previously need to login to their account on dcfc.co.uk to purchase the Luton Town fixture.

Overseas RamsTV subscribers that have purchased a monthly subscription package for the 2020/21 season will be able to watch the fixture as normal, under EFL guidelines.

RamsTV subscribers based outside the UK and Republic of Ireland will be able to watch the entire game from 1am on Sunday, as part of their £12.50 per month subscription which can be purchased here.

RamsTV’s regular Facebook Live shows, presented by Owen Bradley, will be shown as normal on Saturday.

The Warm-Up will begin on Derby County’s Facebook page on Saturday morning to preview the game, while Added Time will go live on Facebook shortly after the final whistle to review the match and provide post-game analysis.

Defender Mike te Wierik will serve a one-match ban after being sent off for a professional foul in Derby’s midweek Carabao Cup Second Round defeat to Preston North End.

Andre Wisdom, George Evans - who missed training on Thursday with a minor knock - and Curtis Davies are all options to feature at the heart of the Rams’ backline alongside on-loan Matt Clarke.

Nathan Byrne is available for selection again after being cup-tied in midweek and could make his first Derby start against the Hatters.

David Marshall, Max Bird, Craig Forsyth and Jack Marriott sat out Carabao Cup clash with Preston on Tuesday and are expected to return to the starting XI.

Speaking to RamsTV ahead of Saturday's game, Derby boss Phillip Cocu said: "The mood is positive in the group.

“Most of the players had a day off on Wednesday, sometimes you need a day off to get the frustration out of the system and move forward to playing against Luton on Saturday.

“It was a tough one to swallow on the Tuesday because we looked great with the ten men, after Mike te Wierik was sent off, and the effort we put in. We have to move on and another tough game against Saturday against Luton.”

More pre-match comments from Derby's manager and midfielder Max Bird can be found across dcfc.co.uk and also on RamsTV.

A temporary matchday rule was put in place for the final nine games of the 2019/20 season, following the resumption of the season after a three-month suspension, when it came to substitutes in games.

Clubs were allowed to make up to five changes over the course of 90 minutes from a possible nine players.

This has now reverted back to the traditional three substitutions being allowed for the 2020/21 campaign, with seven substitutes permitted to be named.

Dean Whitestone will be the man in the middle at Kenilworth Road on Saturday.

His last Derby game was the 2-1 home win over Barnsley at the start of January of this year, with Jack Marriott and Martyn Waghorn scoring for the Rams as Wayne Rooney made his debut for the club.

Whitestone will be assisted by Mark Pottage and Carl Fitch-Jackson on the lines, whilst Ian Cooper has been appointed as the fourth official.

Derby County is continuing to urge supporters to stay away from stadiums when matches are played, with the UK Government advice remaining the same relating to playing behind-closed-doors at this time going into the 2020/21 season.